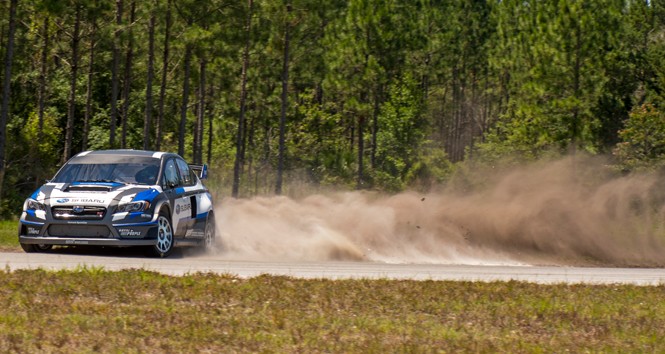 When Sverre Isachsen joined Subaru Rally Team USA in 2012, he was coming off of three consecutive rallycross championships in Europe. Since then, he’s spent the past three years helping the team adapt from stage rally legends to Red Bull Global Rallycross contenders, culminating in his first win on American soil late last season.

Isachsen returns for year four of the partnership in 2015, and he’ll have a new car to work with: the brand new Subaru WRX STI, which has seen months of development that culminated in a final test session earlier this week. In an exclusive interview, Isachsen talks about the new ride, the value of having such a long-term relationship with Subaru, and his goals for the 2015 season:

You’ve spent the past three years developing this Subaru team into a frontrunner in Red Bull GRC, and all the hard work paid off with the breakthrough win in Seattle. What has it meant to you to take the program this far?

We wanted to take one step at a time and build it up properly. Of course we want to fight for the top, but it takes time to get all these things up and going. I feel that for 2015, with the new car, we’re really on the right track.

How valuable is it to you to have had such a lengthy relationship with the team? Do you think it’s easier for you to stay on the same page with the mechanics when you’ve been working with many of them for so long?

This year you’ll get a brand new car once again. What are some of the most important things that you’ve learned over the past few years that you put into this car?

We’ve learned a lot about the whole car, and everything we need about the parts of course. But here in GRC, you need a strong car. It’s a lot of battling, and a lot of jumps—high jumps and hard landings. When you’re landing, you have to fight already, so you need a strong car. You also need a fast car off of the start line. We’ve tried to put everything into the program, and I think we definitely have a good car for the moment.

How much time have you spent in the new car this offseason? How much more testing do you expect to have before the first race?

We have done quite a lot of testing already. Of course, we have the final test now, test number three. I’ll spend three to four days again in the car. But we’re developing the whole time—we cannot have eight hours seat time every day, but you have some time running the car. We want to have 400 or 500 laps of testing at full speed, and that’s the goal for the test. We have a lot of small things to build on, and I’m looking forward to the third test because I think we have the base now.

I love all the stuff—from what I understand, the new venues for this year will be a little bit longer and have more chances to pass, more door-to-door fighting. I’m looking forward to all of the tracks. Daytona was a good one, Barbados was a good one. The new tracks, I will need to learn fast, but I like that.

You’ve improved on your finishing position every year since you’ve joined Red Bull GRC. With that first win over here under your belt, is this a championship or bust season?

Finally, are you keeping that Viking Warrior helmet design for this year?