Some people were born with gasoline in their veins. Hilary was much older when high octane entered her blood and found a permanent state of residence. Hilary grew up showing horses, so when she discovered motorsports after high school she already knew how to compete at a high level. One day as Hilary was sitting in cosmetology class, knowing it wasn’t for her, she needed change. She wanted it to be big, so she picked automotive technology. At the time she was looking for something different, and that’s where she found who she was.

Six months into it, Hilary obtained her first project car.  A year later a family friend suggested that she come out and watch an autocross (SCCA Solo).  She was instantly hooked and went out and bought her first autocross car. Hilary had been competing in SCCA Solo events since 2008, owning and maintaining her own car.  She knew the importance of trying new things, to not be afraid to make adjustments on the fly (for herself and her co-drivers) and to learn from the mistakes she make. She also learned the importance of knowing and understanding the rules of a sanctioning body. Throughout her life Hilary has been no stranger to competition. The most important thing she has learned is to never stop learning.  No matter what the result was that day, She tries to find something that will make the next day better.

In 2010 Hilary purchased a 1989 Honda CRX Si to compete in SCCA Solo’s STS category. This class contains Civic’s, CRX’s, Miata’s and other various late 80s early 90s low horse power and lightweight cars (affectionately nick named $#!t boxes). She chose the CRX because it was an affordable and competitive option. This class has allowed her to build a car that is competitive on the national level on a small budget. This class limits you to some minor bolt-on parts and allows you to run aftermarket wheels and street tires. Hilary’s car specifically has double adjustable shocks, custom spring rates, upper control arms that allow for camber adjustments, intake, exhaust, lightweight pulley’s, fixed racing seat, steering wheel, custom tune, and a telephone pole for a rear sway bar (just kidding but it’s not far off).

Hilary’s experience in motorsports is not just limited to autocross. In 2008 she was asked to crew for a Rally America Team. The team had a goal to reach Sno*Drift at the end of January 2009. They built the car from the ground up working every weekend until they loaded the car up to go to Sno*Drift. Hilary crewed the event and earned a sense of accomplishment when she watched their car cross the finish line. In 2012 Hilary crewed for the one a multi-car LeMons/Chump team that was focused on event and series wins.  In addition to helping with organization and planning, she also served as a spotter and mechanic when needed. Starting off in 2015 she began the journey of crewing for a team in the IMSA series in the PC category; bringing her to some iconic American races such as Rolex 24 Hours at Daytona, 12 Hours at Sebring, 6 Hours of the Glenn, Petit LeMans and many more. This opportunity is allowing her to jump pit wall and get up close and personal with some intense competition. Along with falling asleep in a pit box during the 24 Hours of Daytona, but we won’t get into that.

Hilary’s passion for automobiles has led her to seek out professional opportunities in the industry.  She started off working as a gas station mechanic and later moved to selling performance parts.  Hilary has also worked as an instructor for a Car and Driver ride and drive program.  Her passion also drives her to volunteer, instructing novice autocross schools since 2012 at a regional level, and she regularly works with the timing and scoring teams at National SCCA events – which requires a great deal of attention to detail and extended concentration.  Additionally, Hilary is a regular contributor for SCCA’s SoloMatters online publication, which has given her greater access and understanding of each aspect of an event. She is working on expanding this dedication to include photography and is finding that she very passionate about capturing a cars beauty in a photograph the way it captures her eye.

Hilary is incredibly dedicated to performance automobiles and racing. These dedications result in the desire to learn as many aspects of motorsports and racecar development as possible. Currently Hilary is learning how to analyze data more efficiently. She is very eager to continue to learn how to get the most out of the programs to benefit the driver and the development of the vehicle. She am seeking all opportunities to learn more about data acquisition and she am highly motivated to achieve that goal. 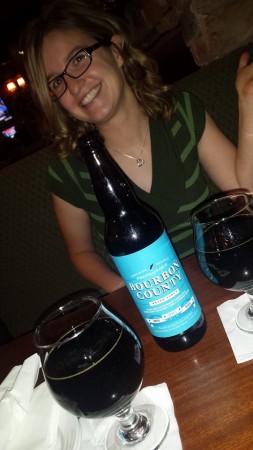 When Hilary is not at a track one of her favorite past times is enjoying a good brew while bench racing. Discussing how to make the car better, how you could have won had you touched the brakes just a little bit sooner in the hairpin, how a spider crawled across your windshield and interrupted your start so your foot slipped off the clutch and you got wheelspin (yeah… that’s what happened…) and on a good day, how the world came together and you won and you’re telling your competitor to stop making excuses or in my case informing them they got beat by a girl! In the process of bench racing and brews Hilary has learned to appreciate some of the finer things in life: craft beer. She enjoy all styles of beer along with writing reviews on the complex flavors and styles. Something else she enjoys, with her elbow exercises (tilting back beers), is bowling. Beer and bowling have a good way of pairing together allowing for a good time and killing her overall pin average.

If you have enjoyed learning about Hilary and my motorsport crazed life, stay tuned for her regular Bench Racing Brew Reviews, coming at you from her garage, at the track or any random bar she end up rolling into in any given city near you!