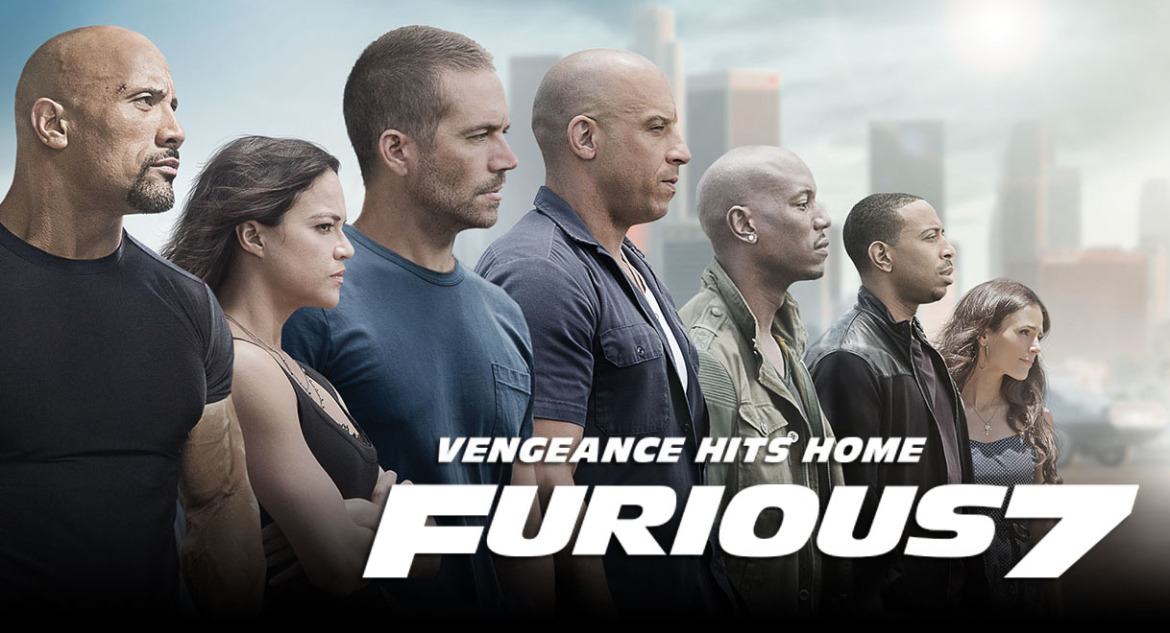 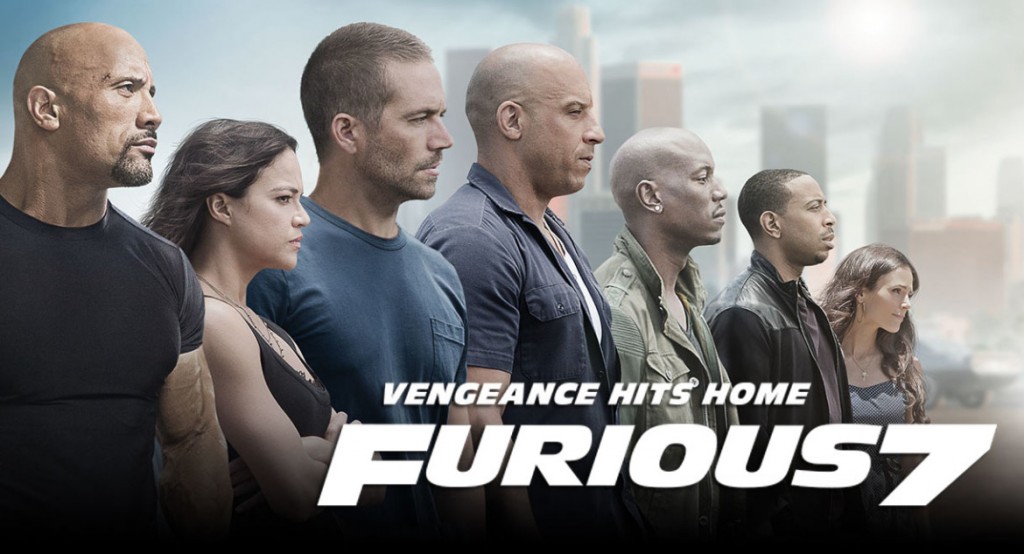 Allow me to begin this review by saying that my expectations for this film were astronomical––better yet––I had hoped for a swan song to commemorate Paul Walker and nurture the series’ characters and further establish their place in the world. In other words, to grant Walker a proper sendoff.

But if you are like me, do not go into Furious 7 expecting any of these things.

Although, to director James Wan’s credit, Furious may not have been more aptly named as it created sheer fury in some dedicated fans as they exited theaters.

As the previous films demonstrated, street racing is now a sad, downtrodden relic of the past that will seldom, if ever, make a return to the silver screen. Indeed, Walker, Diesel and gang’s days of terrorizing the streets of Los Angeles, Miami and [insert exotic location of your choice] are long gone. And that’s a sad thought because that’s all I ever wanted from a Fast & Furious movie.

I mean, this is not rocket science, James Wan(ed- James is the director, Chris Morgan wrote the script). Street racing should be in Furious 7 and its not. I don’t get where the allure for racing––supposedly the sole fiber that binds the franchise together––has gone. To fans’ delight, we are graced with a good sight in the opening scene. Avoiding spoilers, it is the first and tragically last racing scene in Furious 7. And. That is the Travesty of this film.

Out with the old, in with the new, right? The director of Fast Five and Fast & Furious 6, Justin Lin, and Furious 7’s director James Wan traded the reckless street racing scenes for something arguably safer… guns, explosions, evil masterminds and exponentially more scantily clad women with each passing installment.

What does that then leave us with? In essence, a franchise that is desperately trying to adapt to the times and the increasingly unrefined tastes of the movie-going public. And this, I argue, is where the franchise is going wrong. Without doubt, Wan’s brainchild will do well in box offices. At the end of the day though, is that really the point of art and expression?

Without jumping the shark here, any real craftsman’s goal should be to create the best possible product first and foremost and then wow the crowd later. If these two get confused, well, you ostensibly end up with a politician: a man or woman whose explicit goal is to win favor through any means, which includes posturing and pandering. Yet the true artisan defines his or her craft on the basis that it aligns with his or her vision… not on how many tickets it can sell at the box office (ed.- The Fast And Furious Franchise is rumored to be the most profitable movie franchise that Hollywood has seen in decades…)

Sadly, we live in a generation where we place the carriage before the horse. We can witness countless other series that have been squeezed dry for every last penny they could earn. Though, the Fast & Furious series seems to be the greatest perpetrator of this as the Business Insider remarked that it is one that “needs to end now,” while Hollywire ranks it as the single most overdone movie series.

I sincerely believe the series could profit from being done right and could prevent the now-foreseeable disposability of the franchise in the years to come. The series will find increasing difficulty in defining itself apart from the rest if Wan chooses to indeed make more movies. Without street racing, what does it have going for it? More specifically, what is unique about this movie? The series will experience apathy from crowds and in equal measure, the dilution of creativity.

The issue with Furious 7 is its jarring, incoherent pacing. To add to the list of grievances, audience members are soon bored by explosions–already overwrought staples in the industry that Wan in no way helps–which become but a mere bore as hundreds of fiery Hollywood magic balls incinerate the colossal IMAX screen.

Speaking of staples, an array of exotic locales is something that has always been synonymous with the Fast & the Furious. But unlike the immersion factor Tokyo Drift provided, expect none of that. Rather, expect to see stereotypical facsimiles of Middle Eastern culture that serve as paper-thin stand-ins for the real thing, banking on audiences not being savvy enough to recognize how underutilized the film’s sense of place truly is. A sensation such as that can feel somewhat patronizing.

Worth noting as well is how greatly James Wan dropped the ball on what was supposed to be the ribbon on top of nearly 15 years’ worth of character development. Instead of tapping into the characters’ potential growth, he chose to keep them in their prepackaged shrink wrap, allowing them to stale in the face of laughably unrealistic romantic scenes and as they fall back into the staid roles they have routinely performed in films past.

Wan does nothing to move the franchise forward. In fact, without giving anything away, a number of set pieces and camera angles were very clearly lifted from previous films within the franchise. We can of course look at these artistic decisions in one of two ways: either Wan wanted to pay homage to the films past or did so out of laziness.

Either way, Furious 7 ‘s plot has too much in common with its predecessors for my liking. The past three films seemed as though they abided by this strict formula: we are introduced to flawed, human and somewhat interesting characters, they encounter a problem, they choose to solve said problem together, a body of “evil” (in what way, we rarely find out) persons are identified and the group of unlikely misfits somehow–through thick or thin, through plot twist or monotony–see their goals through.

But maybe Wan is smart. Compared to the general public at large, car fans make up such a tiny portion of the movie going population. Perhaps Wan and his crack-team of producers have figured out that the American public holds–at the very least–some dormant inkling of petroleum thriving somewhere, deep in their bloodstream. “After all, my dad’s uncle’s brother once had a Camaro once… or was that a Charger? Anyway…” I imagine the average viewer of Furious 7 generally uninterested in cars, but gleefully enjoying the ride. And there is no shortage of money to be made from these less-than-discerning moviegoers, that is an absolute fact. So maybe Wan is ultimately the genius.

Let’s approach what I don’t like about this film more clinically. Watch a Furious 7 trailer on the net. Any trailer. It doesn’t matter if you’ve seen the movie or not yet. Just watch any old trailer. Through your YouTube window, you see a film that inspires adrenaline. An action-packed, high-octane thriller, where the stars are in equal parts the actors as they are the cars.

But that’s not what we saw throughout the film….

I felt somewhat deceived walking out of the theater. I was not quite expecting a traditional action movie. And quite frankly, it got quite long in the tooth as explosion number 1,000 erupts while the insignificant, convoluted plot intricacy x is never expounded upon… It wears on you. You simply cease to care because by the seventh goddamn film, you simply know our cast of heroes will live to race another car. (ed.- well most of them….RIP Paul Walker)

“Hey, it’s a simple, kick-back-and-relax, big, blockbuster Hollywood action film, so why do I care?,” you say inquisitively. And you may be right. However, I have grown significantly since the original the Fast & the Furious in 2001. Call me cynical all you want, but I expected a film that suspends my disbelief, maintains my interest, makes me care about the characters, a film that is not trying to appeal to mouth breathers, a film that I am not sick of watching by the time it ends, a film that makes sense when I walk out of the theater, instead of making me think, “what exactly did I just watch?”

But maybe there was nothing for Wan to cull from the original lore in the first place. Maybe the characters were indeed poorly-established and unrealistic since the very beginning.

Or equally likely for Furious 7, my expectations were set artificially high due to my own vested interest in the series. At the end of it all, I felt Paul Walker’s departure—both literal as well as metaphorical—was heavy-handed. Dare I say it, it was outright botched.

No, I do not suggest a film in which political intrigue, international affairs, the laws of physics play overbearing roles–thus overemphasizing realism over entertainment–but I did hope for a movie that would tie the series up and continue the story of street racing that make the franchise so popular in the first place.

Instead, we got a movie in which there is one race.