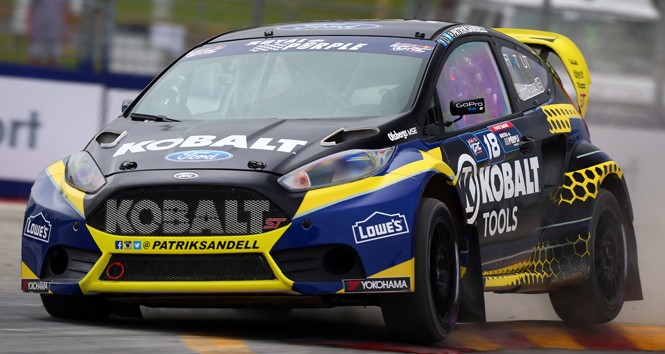 2014 Results: Sandell broke through for his first race victory in Washington DC in June, and on the whole was slightly more consistent, missing only one final as opposed to three the year before. But that win was his only podium finish of the year, contributing to his second consecutive sixth place finish in Supercar points.

What’s New in 2015: Year three will see Sandell head to a new team, leaving Olsbergs MSE for Bryan Herta Rallysport, and a new car (as BHR uses M-Sport Fords). Despite the switch, he maintains his Kobalt Tools sponsorship for the third consecutive season.

Strengths: A pure rally driver before coming to Red Bull GRC, Sandell’s M-Sport car should be a perfect fit for him with its World Rally heritage. It’ll be interesting to see how he adapts to the machinery that most called the best in the series with Ken Block over the past two years.

What To Watch For: Sandell and teammate Austin Dyne are a complementary mix, with the former a loose surface expert and the latter a veteran of tarmac racing. The question is how much those different backgrounds will allow each driver to help one another. Sandell showed star potential in DC when he held off Nelson Piquet Jr., but can he tap into that zone more than once?

Outlook: A dark horse championship pick, Sandell has spent the past two years adapting to rallycross and becoming a cleaner and more consistent driver. 2015 could be his time to shine with a new team and a fresh perspective.