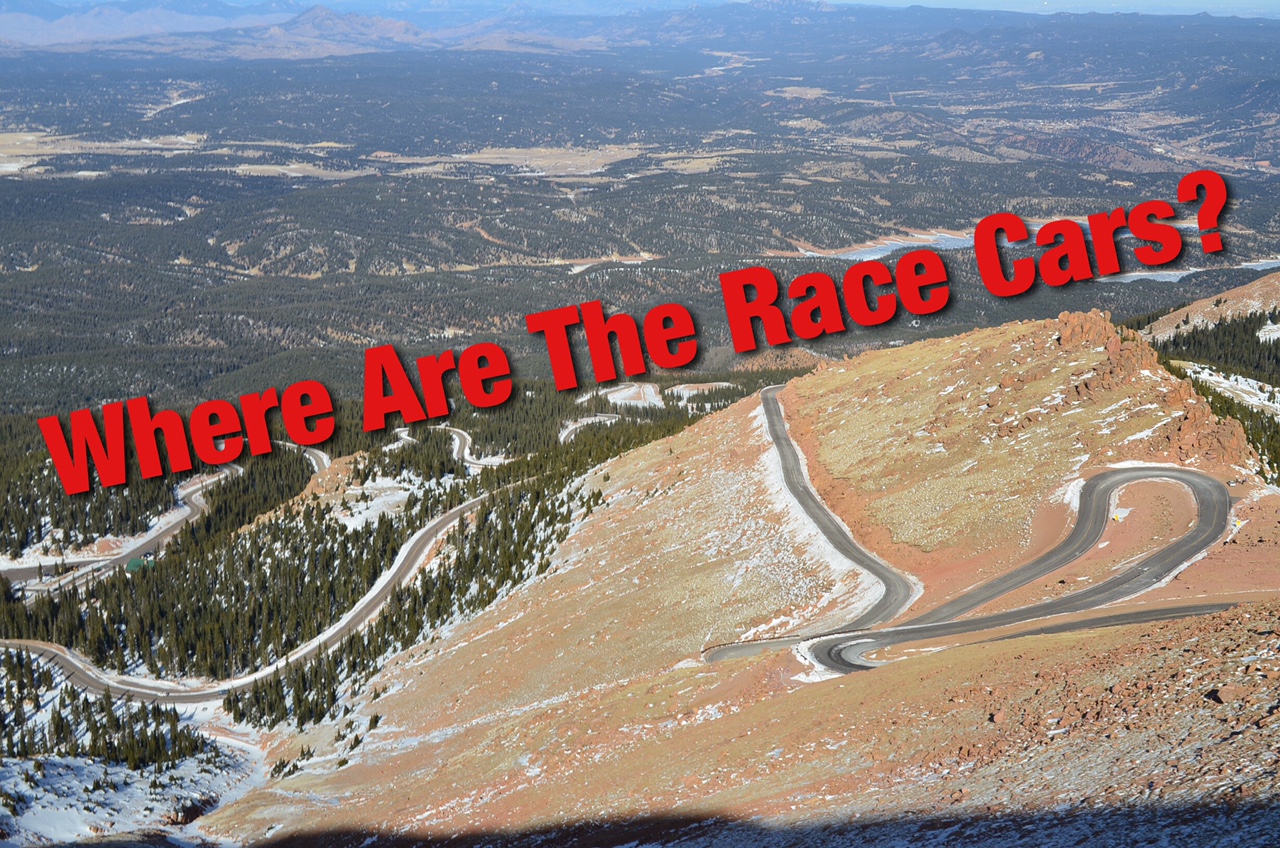 The 100th running of the Pikes Peak Hill Climb was last weekend, but unless you’re a die hard Pikes Peak Hillclimbfan you probably didn’t even know it was happening. The big names were there, but the event was restricted to 100 vehicles and 35 were motorcycles. I heard even less competed on race day after a bunch of racers failed to qualify. Unfortunately no one bothered to publish the race entry list or results from Sunday. It’s like the race never happened. Which is sad because Pikes Peak is the oldest continually running race in the history of the United States. How did we get here? Why did the media stop covering it? Why did the race itself do nothing to promote the event? I’m not entirely sure but here’s my guess.

Normally they take a few hundred entries apparently making it a large event with a huge reach on social media. With only 65 cars there were far less stories shared on the internet. (Edit: apparently most of the cuts were to the motorcycle class, but I remember there being more than 65 cars a few years ago. Unfortunately I can’t find the previous year’s entry lists.) It also means there were less stories for the media to cover. Either way, it looks like most of the usual media didn’t bother to attend. And with 65 cars, the published stories were all the same. Hankook sponsored Rhys Millen and Acura ran an electric NSX with 4 motors. I heard from friends that Acura actually entered four cars and Romain Dumas, the winner this year, had a two car team – that’s 10% of the field right there. 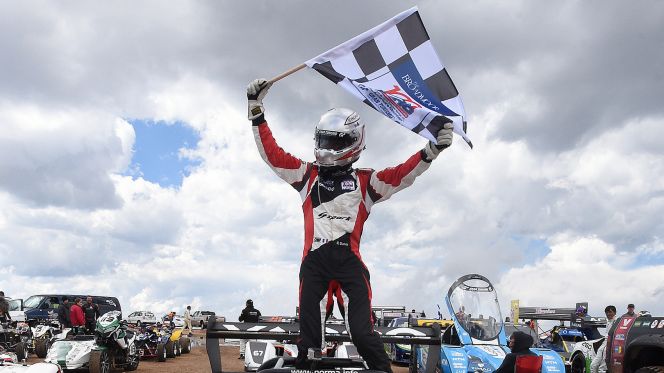 I’m a huge Rhys Millen fan so it was great to see his race covered, but it’s a shame because the interesting stories are generally about the home-built car run by a group of friends that have dreamed about reaching 14,114 ft for years. Their motors are unusual and their wings massive. Their cars look wild yet they’re still something that the rest of could build if we had the right group of friends and assembled the required knowledge.

Instead Hankook paid news outlets to publish their story(known as a “sponsored post”) and Acura appears to be the only team that sent out a press release. If you don’t have friends competing, it might as well have been a two car race. Three, if you include the winner Romain Dumas that no one heard anything about until he won. I wanted to link to the Hankook sponsored post but like an advertisement, once the paid program is over, the posts are gone too. There was one sponsored post discussing Rhys Millen’s 2016 entry and another saying he broke the electric record. Neither are still up on Jalopnik or any of the other blogs. It’s like the race never happened.

You can Google “Pikes Peak International Hillclimb” and click the news tab, but you’ll only find five or six articles and they all the same. Romain Dumas Wins Pikes Peak. Not one contains race results. Since initially writing this article, it looks like Blake Fuller of Go Puck sent out a press release about his run up the mountain in a Tesla S but that it. No raceweek coverage, no race results, Just Rhys, Acura, Dumas wins, and there was a Tesla there.

I get that the smaller field produces less social media but was is there no coverage of the race? Why did the usual media outlets skip the race entirely? I’ve heard people say that Loeb ruined the mountain by decimating the record in 2013, but others say that Pikes Peak changed because they fully paved the mountain road in 2012 and the race lost its huge following and excitement. Leob’s in-car video is cool but it’s nothing compared to the sideways era on dirt. Check out Climb Dance for a comparison. 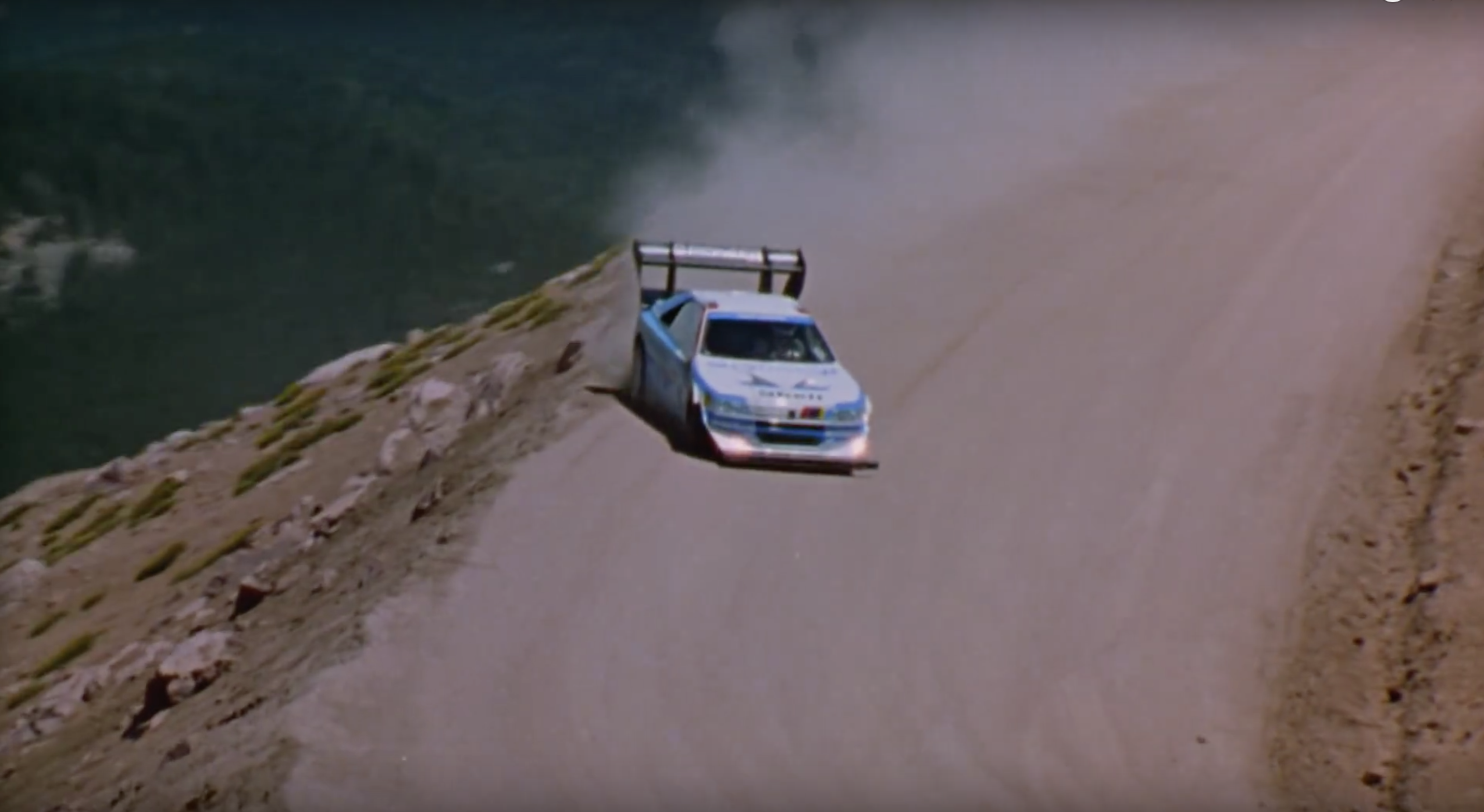 I’ve also heard that the race isn’t as big of deal because many of the old racers that loved the dirt stopped going when it was paved. I don’t entirely believe that because the full pavement course opened the door for even more competitors that are used to paved race tracks and time attack racing. Maybe the customer base changed and made the race less interesting to cover?

I think has more to do with limiting the field to 100 competitors. In case you’re asking why would they do that? My hunch is that the organizers wanted their race to become more exclusive and loaded with big name drivers and fancy cars. But its also because the race became unmanageable for the current organizing body. In previous years, teams were complaining about the lack of practice leading up to the race. Back in 2010 you might get seven or eight passes up the mountain but by 2012, you were lucky to squeeze in three practice runs. Limiting the field gives the team more practice time and hopefully reduces the accidents on race day.

The smaller field also means they can get everyone up the mountain on race day which was becoming a serious problem. Between the accidents and weather, the race would run so long that daylight becomes a real concern. To be fair, it’s not something they can control. Weather comes out of nowhere at 14,000 ft and can cover the top in snow or hail in minutes causing an extended race delay. Accidents are uncontrollable too and they happen regularly. The course gets shut down while the ambulance deploys and it takes a while to get everything back into position before they can restart. Limiting the entries means everyone should get up the mountain in the time allowed. But it also means there are less stories to cover if you’re a media outlet.

Another factor is the hillclimb’s competition. The same weekend was Indy Car’s return to Road America. Pirelli World Challenge was there as well. Two big race weekends in one location. Nascar was running the road course at Sonoma and there was the Goodwood Festival of Speed was going on in England which is a massive event. I doubt any european journalists wanted to skip that to fly all the way over to see 65 cars and 35 motorcycles run up Pikes Peak.

The real problem is lack of media from the race organizers. The only updates on their website discuss the Pikes Peak Hillclimb Museum, Acura’s press release, and Rod Millen’s exhibition run up part of the mountain in his Celica. 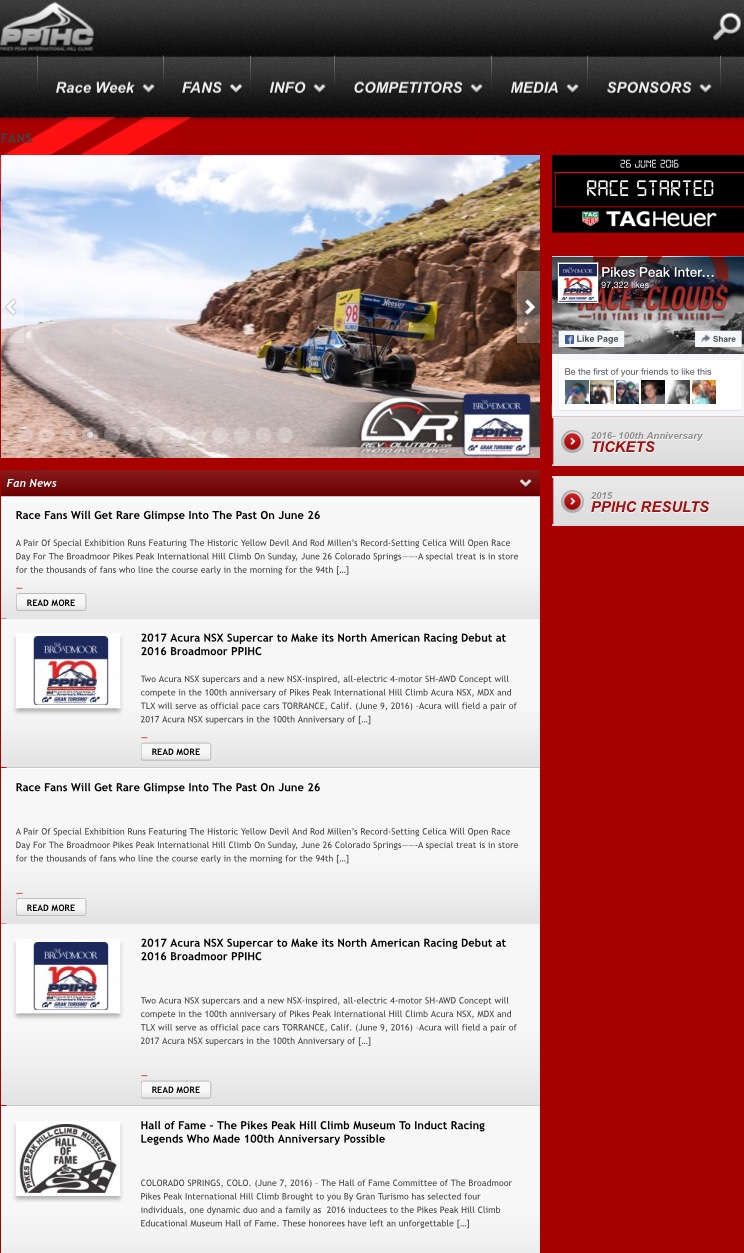 You would at least think they would use their Twitter feed to post qualifying results and live updates during the race. Instead it discusses Loeb’s record run from three years ago and how difficult it is to setup wifi on the hill… So we know they have wifi, why didn’t the race use it? (Edit: Apparently the race created a live timing app for Apple and Android and all the timing updates went out through the app. I wish someone would have told me. Maybe they should have used twitter to let people know about the app?) 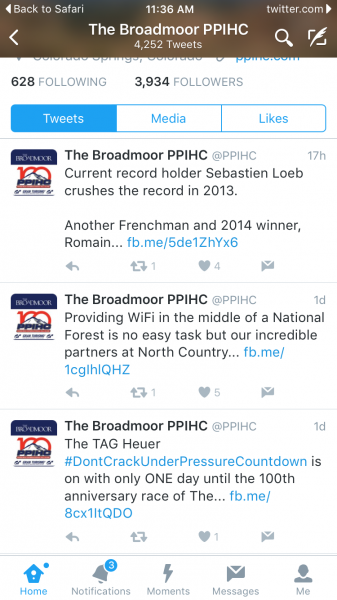 The sad part is this story is about the race fans that traveled from around the country to watch. I haven’t found one that wants to go back. The Pikes Peak International Hillclimb Official Facebook Page received a bunch of one star reviews over the weekend expressing their displeasure with race. Most felt the current race didn’t reflect the media from year’s past. The problem is they’re right. The race is very different than in years past. 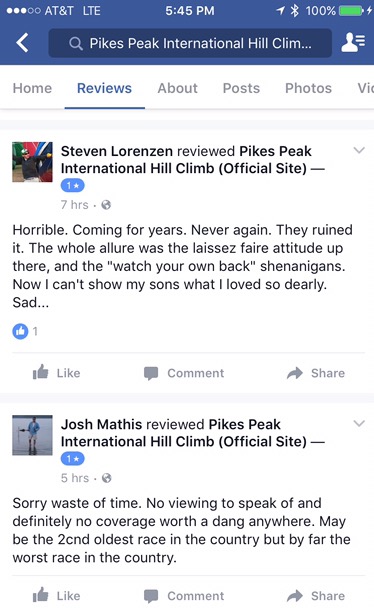 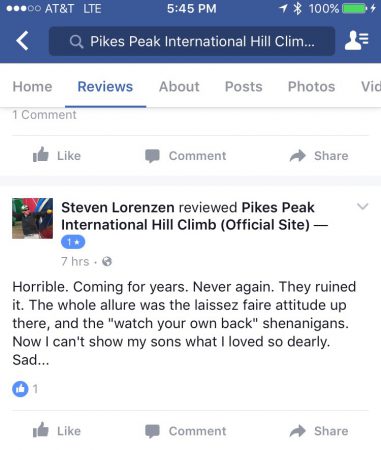 65 cars means its a much smaller event but another reason the fans were upset is because their view of the race was significantly limited from previous years – but for good reason. Spectators were injured in previous years and new spectator safety regulations were implemented – meaning you can only watch from where the race tells you to. No more hiking up the mountain for a great viewing spot. The spectator areas were roped off and guarded to prevent people from leaving. Like a race fan prison. According to the reviews you just read, people felt like they were given a tiny snapshot of the race from these forced spectator areas. You can’t blame the organizers for improving safety, but it cost the race a lot of publicity and popularity. 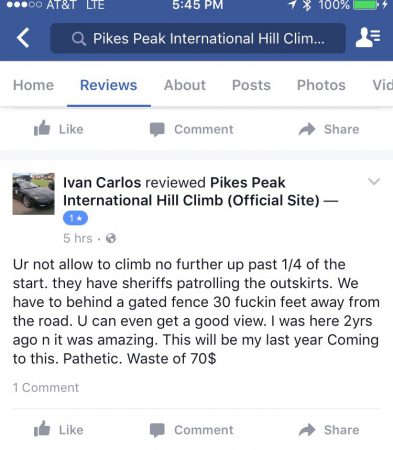 As for the Pikes Peak International Hillclimb website, I still can’t find the race results from three days ago. How long does it take to publish the results of 65 cars? But under “info” there is a link to a gun manufacturer’s Facebook page… Not sure why that’s on there. (Edit: The Live Timing and Scoring tab is where you can find the final race results. I naturally assumed “live” meant live and it was no longer active. I also never went to the link because my virus protection software said that the link contains malicious code that could damage my computer. Its the first time Ive ever seen that message and I spend a lot of time on the internet so I never went to the link). 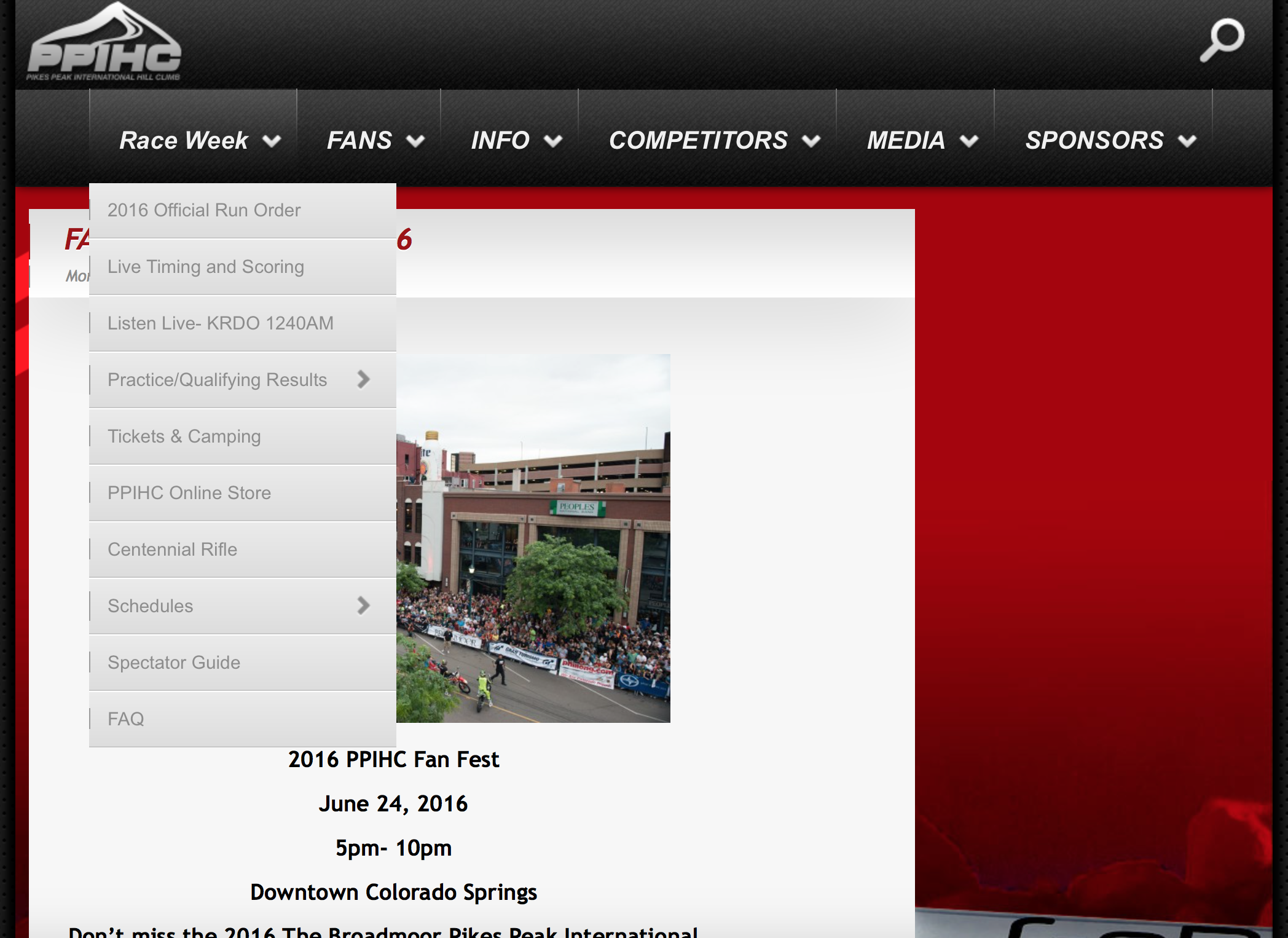 Also gone this year was the live video feed. It wasn’t that great so you’re not missing anything, but it did allow you to see cars and watch a tiny bit of the race. Instead there was no video coverage, no social media coverage, no automotive press, and no race results. It’s like the race never happened.

So what did happen to the longest running race in the United States? Here’s my guess. The race is far less interesting to watch now that it’s paved. Loeb broke the mountain and no one cares anymore, including the media. The race used be to the largest grassroots motorsport event of the year, but the organizers wanted it to be fancy and exclusive and limited the field to 65 cars – meaning there were far less stories and pictures on social media. The fancy teams do a lot less to promote themselves than grassroots racers because normally they don’t need to. The race organizers did nothing to promote the event or publish anything during race weekend and they still haven’t bothered to publish race results (Edit: they are under the Live Timing tab on the website apparently but you would think they would put up a post with the complete official results like most races). If the organizers don’t care why would anyone else?

The good news is that Speedhunters always covers the race and in the next few days you’ll get to see Larry Chen’s incredible photos from the event. But my guess is there won’t be much coverage after that. I wish I knew why Pikes Peak International Hillclimb is disappearing, but I’m not entirely sure. Curious to hear your thoughts in the comments below.

Edit: I missed some great coverage of the 2016 Pikes Peak hillclimb by Right Foot Down. It’s worth a read.