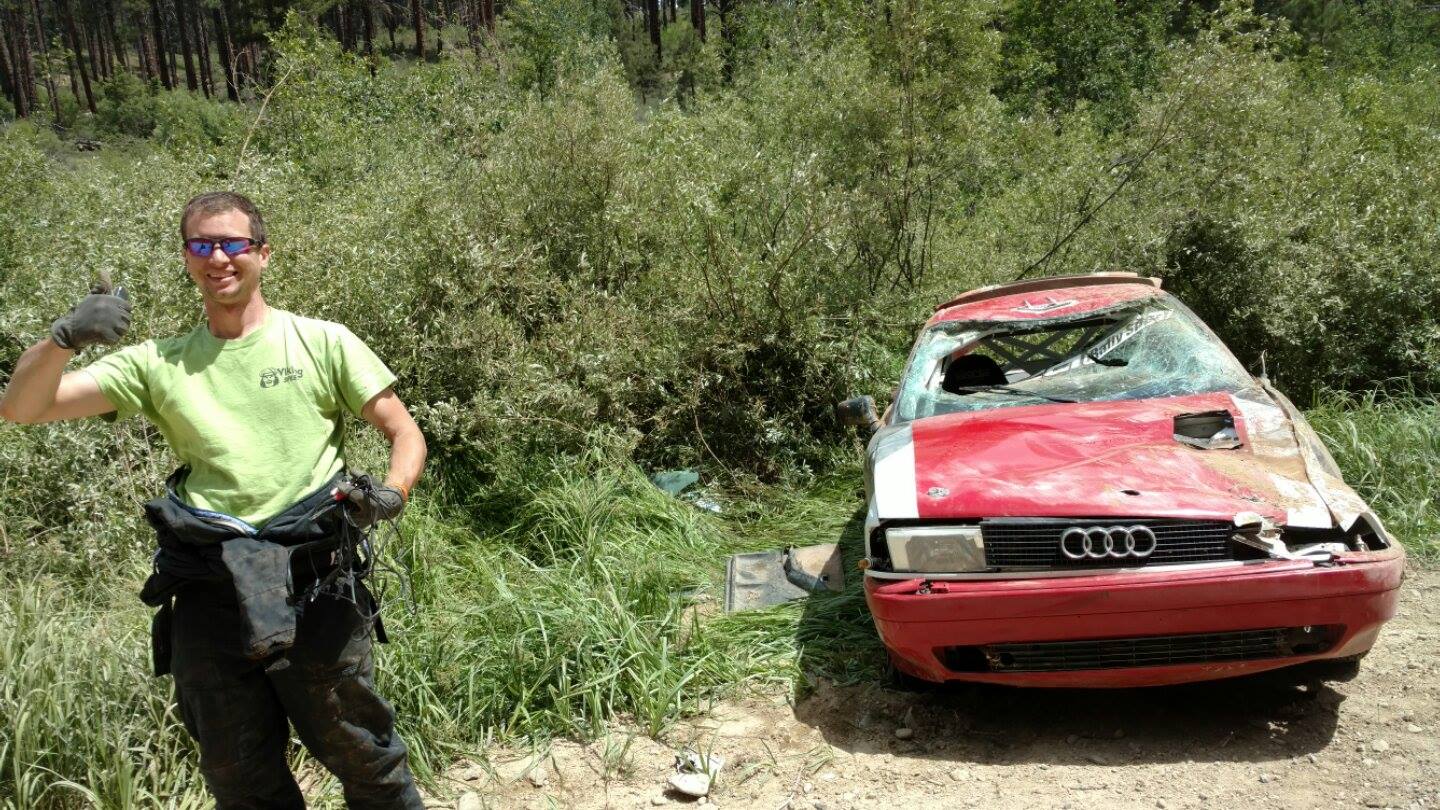 It was some time since I co-drive at a rally. The last time ended with a rather quick DNF in a Porsche before we even reached the start of the first stage. At any rate, my friend AJ asked me to co-drive a few months back for the Idaho Rally, and having the weekend free, obviously I agreed. I have a fair amount of history with this event going back about 6 years. I’ve been a volunteer, an organizer, and a competitor. I would also not that I lived in Boise for a time and frequently camped in that area.

California is now my home, so I had a nice long drive ahead of me. That’s fine, I got to pass all those fun parts of Nevada and Oregon that no one lives in. Okay, so a couple people live there, but I have no idea what they do. Probably something with cows. I’m just glad the science gave me cruise control and MP3 players.

Flash forward several hours, I arrived at the host hotel at about 8pm, a day early. I had planned to arrive late at night and stay with a friend, Emmett, who worked until 2 or 3 am, then head up the next morning. I could only stand to malinger around Boise for a few hours before I said “screw it” and paid some exorbitant price for a room. Being tired and bored is punishing. I made sure to shower twice to get the best of my $120 bucks.

Thursday morning came around and I headed up to Placerville with Emmett to setup camp. The way the Idaho rally works, is that the stages are cloverleafed around Placerville, a small mining town in the mountains about an hour north of Boise. Thus, the service area is central to the stages. The camp site is within walking distance to boot. There is even a corner store, Donna’s Place, that is open what seems like all the time. Seriously. I went up on Christmas once when I was stationed in Boise, and sure enough, they were open. I drank an adult beverage in the snow. Good times, but i digress.

By the time we got there, a few volunteers had already arrived. Still got some choice spots for the tents. Anthony was supposed to arrive “sometime” that day and registration still needed doing. We had the added bonus of a puncture in the Audi’s boost hose due to the involvement of my driver, a screwdriver, a lamp cord, and gravity. So about 3pm I headed back down the mountain. Coming back down to the host hotel, I smelled the that oh-so-distinct hot ethylene glycol smell. I blamed the smelly smell on the vehicle in front of me since temperatures were normal.

I arrived at the host hotel and found my mudflaps dripping. Being the astute person I am, I knew mudflaps should not leak. I popped the hood to look, and sure as shit, the radiator end tank had split. Really I couldn’t be too mad since the Tacoma had its original radiator with 279,000 or so miles on it. Plus I broke in the middle of the tech inspection area with everyone’s service rigs, and not some nuclear weapons test site in Nevada. I call the local car parts store with green shirted employees to get a radiator. Best they could do was tomorrow morning. Fine. So I sat and waited for Anthony. Thankfully, Jeff and Sarah’s group were in from Utah so I got dinner with them.

AJ arrived by a means that I can only describe as impressive. He had towed the Audi, on a proper dual axle car trailer, complete with tools and spares from Oregon, in a Honda mini van. We ran through the necessary organizational stuff and then dropped the trailer to head to Placerville. I had to leave the Toyota at the hotel. Emmett, frankly had no idea where I was since Placerville has no cell coverage. Base camps at Mt. Everest have cell coverage, but not Placerville. We got in late, drank beer, made fire, all that other camping stuff.

Remember those awesome tent spots? Well people with a camping trailer decided to park near us. A full-sized living room came forth from the side followed by a breakfast nook, or some other intrusive display of wealth and camping superiority. This basically occupied the airspace of back of one of our tents. This is the nook where they put their screaming kids.

Recce day! A day where you need to wake up early and drive all the roads, checking and editing the notes. Or at least other people did. We did one stage after a nice lazy breakfast, then headed back to Boise to fix the Audi and the Toyota. AJ arranged for a new fancy pants hose to be held at Boise Airport and I had a radiator awaiting at the ambiguous car parts store. We got the parts, and got back to the host hotel to get busy. I set into the radiator job thinking, “hey, this looks easy.” And it would have been easy if the radiator made in some defunct country was actually built right. Instead I mucked around in the sun for five hours trying every combination of OEM and replacement garage parts I could until I got something that resembled a cooling system together.

The Audi was ready for parc expose so we moseyed on down for that. I ate a hot dog.

Having not done an event for awhile, I was required to attend the novice meeting. AJ had no choice in the matter either. After an hour and a half of that, we finally got to put the car on the trailer and headed back to Placerville. The Honda towing spectacle was upfront, and I trailing in the Tacoma hoping my mudflaps don’t starting leaking again. Once again, fire, beer, food, camping ensued.

Fun fact, it’s really damn cold in the mountains at night. Especially since alcohol is a diuretic and peeing in freezing cold, fresh from a warm sleeping bag is about the worse buzz kill ever. Morning eventually came and I got in my suit, made tea, drank tea, and got in the Audi. We started our way out of camp and down to the stage start.

Harris Creek is a fast, flowing road that connects Placerville to highway 55 from the west side of Boise. Since we were camping in Placerville, we had to transit down the far end of the stage before the road was closed.

We were starting pretty far down on the list, and with 2 minute intervals, we had some free time. As any bored co-driver would, I was playing with things on the car and found the steering wheel a bit jiggly. Jiggly as in I could spin the nut off with my finger. Frankly, it was too early for that kinda shit. So I went around look for a tire iron, since it looked like about the right size for a 23mm. Thankfully, the nut was a 24mm so no good solution was found. We wound up tightening it down with some pliers and planned to deal with it properly at service.

Harris Creek finished at 14:54. Not too far off some well-prepped and proven cars, but by no means a top contender. We also found the car to be a touch squirrelly, feeling more like a drift car than a rally car. Our 15 minute service passed without a good resolution to the steering wheel, which we now knew to be crooked, but such is life. Alder Creek was a shorter stage but pretty fast before the summit. Things could have gone better as we came into a “L5 long late into R6” while in 4th gear. AJ didn’t hear the “late” and the car had no interest in helping us out. I’ll let the video do the talking. 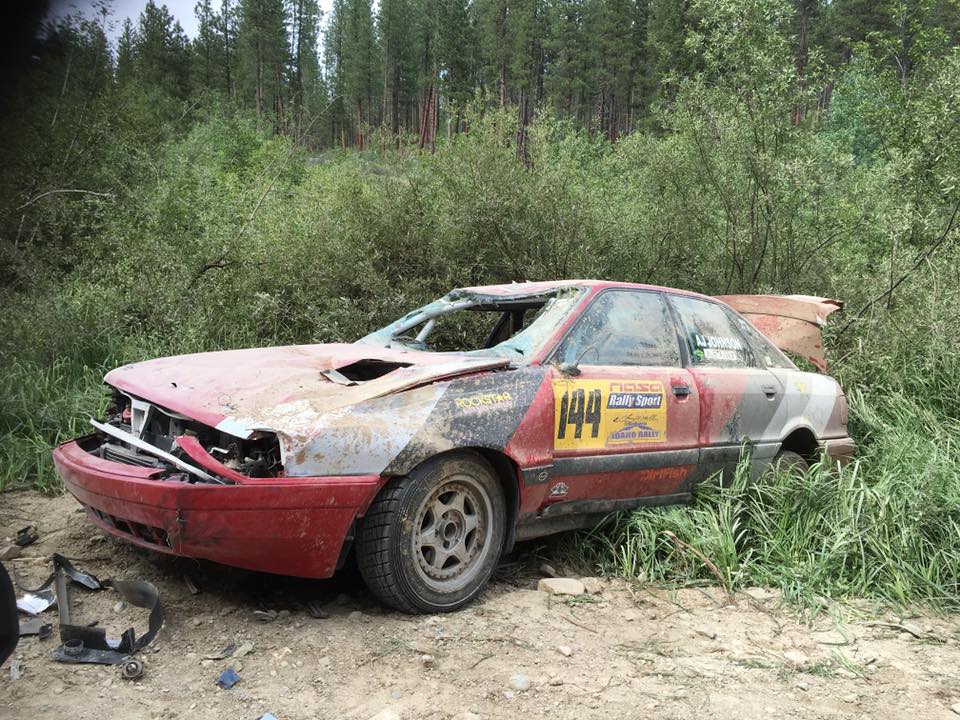