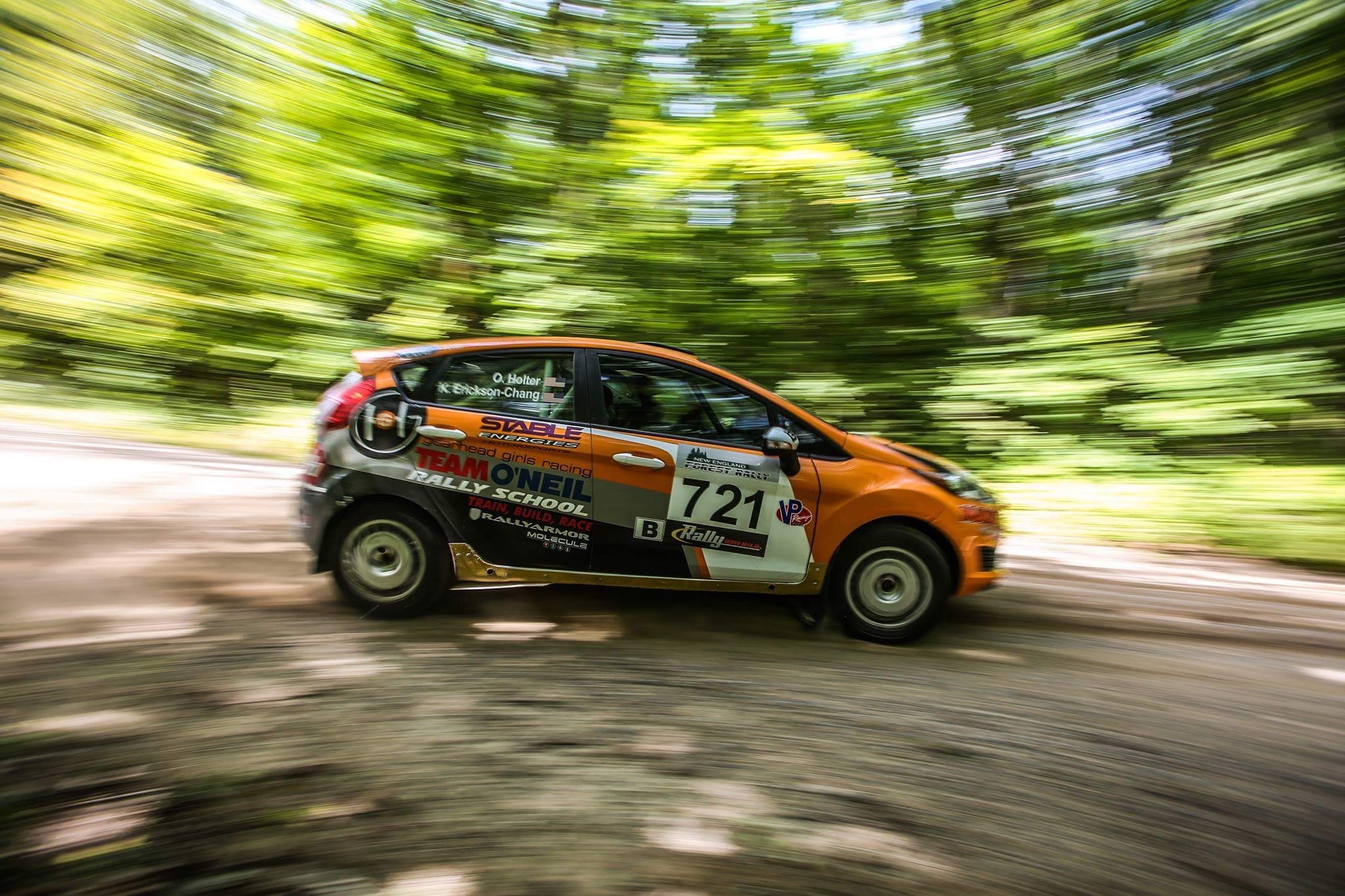 Ojibwe happened really fast.  Normally, I remember a lot about each rally, but that is not the case.

A quick test on Wednesday, 2 pass recce on Thursday, rally Friday and Saturday. 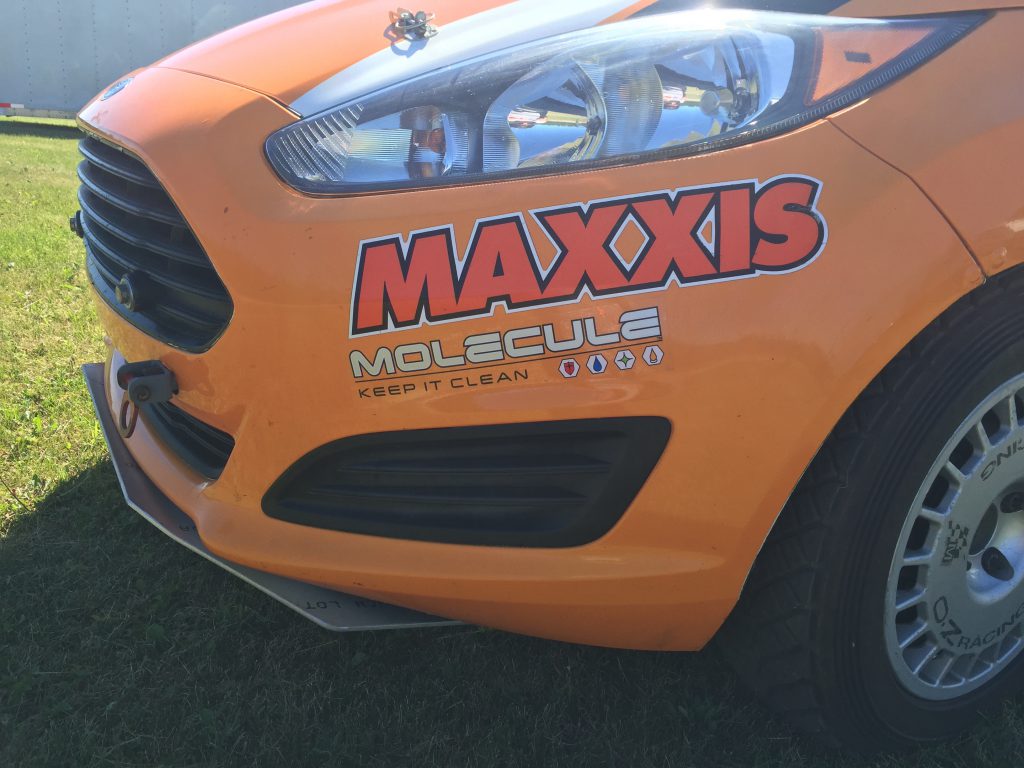 The test was fine.  The road wasn’t super indicative of the stages that we would be racing on, even though it is a stage that wasn’t used this year.  At five miles and with a fair transit, each pass was a commitment.  We did a few runs and called it a day. 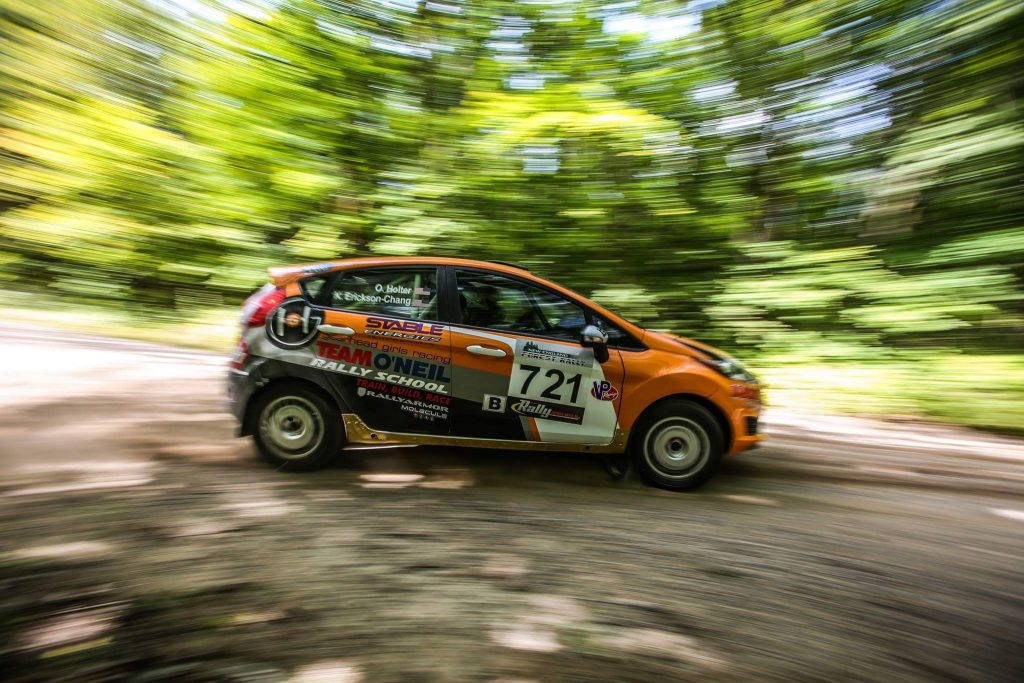 Recce allowed for two passes, which we took advantage of even though we weren’t writing our own notes.  Some teams decided to stray from the set path (our ‘group’ ended up being ourselves, David and Craig, John and Will, and a last car who I didn’t know) and we finished up fairly early for completing both passes.

Friday’s parc exposé didn’t begin until 3:30.  Designated a sleep-in day, everyone was still up pretty early.  The day was spent sitting in the hotel parking lot, attending to a few housekeeping tasks, and going for drive-through Mexican for lunch.

The late start meant that it would also be a late night, finishing the stages before midnight if we were lucky.  We also moved to a 2 minute dust window, which added a nice delay and slowed everything down.  The first leg of the rally wasn’t fantastic for us.  The car was feeling slow to respond in the fast parts of the stages, and we were ever so slightly brushing up against the swept gravel, making it loose.  We had a stage win on the first stage, and beat some of the R2+s on the third, so we were both happy and surprised with times.  After making a suspension adjustment and the roads getting dug up and swept a bit more, the next leg felt much more comfortable.  Having seen the roads a full three times, I was still a bit tentative to push in the fast stuff. 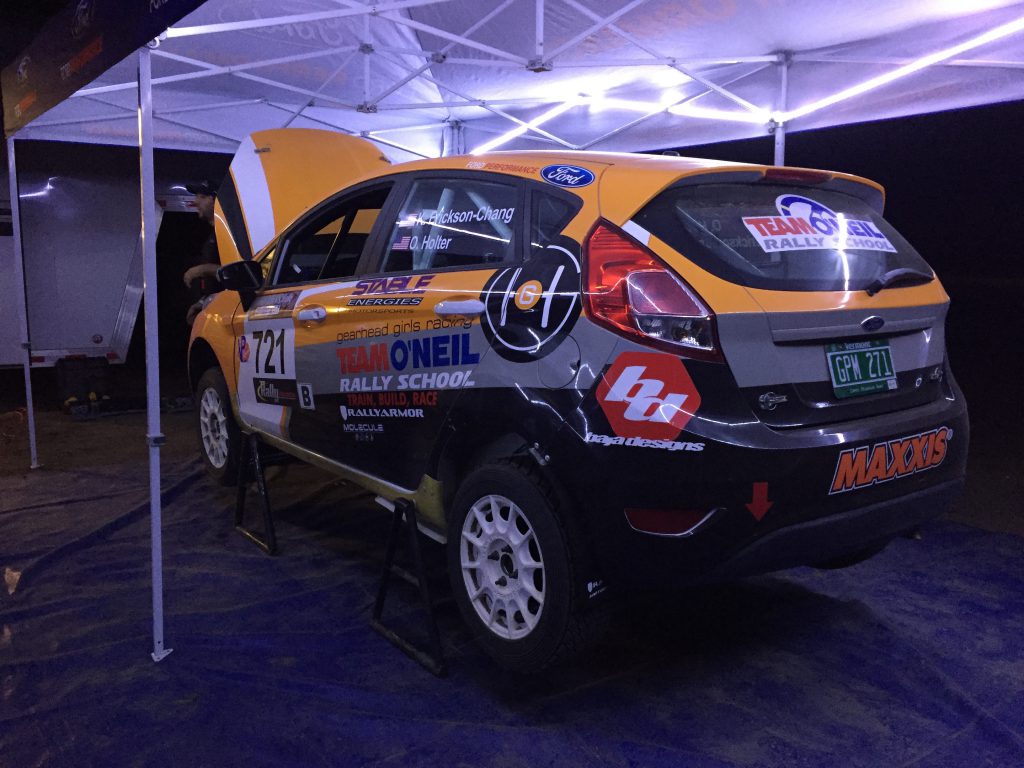 We made it back to the hotel around 1:30am, though after a shower and snack, the times started posting.  This made for an even later night, as I impatiently waited and refreshed the screen.  I finally got to bed around 3:00am.  Naturally, Cameron and Ryan were dominating 2WD, but the next four cars were in a fairly-competitive 2 minute window of times finishing up day one.  The remainder of the 2WD cars had offs and were all looking to super-rally for day two.  One of which was with Team O’Neil, meaning it would be a very late night for the crew.  In fact, lots of cars had an interesting night, plagued by mechanical problems, offs, very sick co-drivers, light issues, and more.  Usually, when compared, there are a lot of G2 and G5 (regional 2WD) teams mixed into the times set by national 2WD competitors.  Interestingly enough, only two regional teams were within this time range, a testament to how well everyone entered nationally was driving.

Since there was no parc ex on Saturday, we got to wake up later than a normal rally day as well.  However, once again we were all up pretty early again… about 6:30 for myself.  We had breakfast and headed out to the service area early, where there would be a quick competitors’ meeting and MTC before beginning the day’s stages.

The first leg on Saturday finished interestingly.  We had started the day behind #573, our friends Dan and Matt in the THR Honda CRZ.  These guys are teammates to Jordan and Brian in the HPD/Maxxis Honda Fit, our main competition this season.  Finishing the first stage of the day, Otterkill (stage 7), the Evo that was behind us was making up time.  We decided to let them pass us in the control of the next stage so that we wouldn’t have to worry about encountering each other on McKenzie, which is longer.  They had also made up time on the CRZ, so I ran up to tell Matt was was about to happen, and they opted to have them do the same.

A fun fact about stage 9: it was the very first time the full length of this stage, called Strawberry Mtn, has been run.  It ends with a very fast section over 4-5 miles, but has some technical corners tossed in.  It was up for debate whether they would lop off the finish of the stage.

Well, as we made it to the fast portion of Strawberry Mtn, there was Matt getting their triangles out, then the CRZ in the green stuff on the outside of the next corner, and Dan checking it out.  We’d been given the ok to keep racing, so that we did.  At the ATC, we told the control workers what had happened.

Just a few miles later, as we were transiting to the service, we found #78 Dave and Leanne, also with Team O’Neil, stopped on the side of the road.  The report was that they had suddenly lost power.  We hooked them up and towed them the eight or so miles back to service.  We weren’t yet on our minute, but their minute was rapidly approaching, so we disconnected the rope and pushed them into the control just in time.  Then we ran back to our car, now parked back up on the local highway, in order to make sure we made our in minute.

Dan and Matt were still out on stage and Saturday’s stages are in some low service areas.  Not knowing the situation, we filled in Brian on their teammates’ status, who should have been into the control just before us.

As it turned out, Heavy Sweep gave them a quick yank and kept truckin’ on, so the boys got a ride back with photographers Peter Lapinski and Alex Wong.  Since they needed to go back out with RJ and retrieve the car, RJ wouldn’t be able to make the remote refuel and lights service in Osage for Jordan and Brian.  We ended up bringing fuel out for them in TON’s SUV.

After the events of the early afternoon, we set out for the second leg of the day.   Prior to leaving service, it was announced that the start of Otterkill was reporting lightning and hail.  Otterkill has the capacity to hold a lot of water, and get very muddy.  This is much unlike the other stages, where the sandy soil tends to drain very well.  We all drove into this storm on the transit, and visibility was so awful that everyone ended up pulled over on the side of the road.

When we arrived to the start, there was another delay and the 0 car was just on stage.  Prompting more hurry up and wait time, we had another social hour.  Otterkill II came with a lot of slippy, and wheelspin.  We got our other two stage wins on the following two stages, McKenzie II and Indian Creek.

Then, to reverse order, there is a big parc ferme once back in Detroit Lakes.  The final stages are an evening and night pass of a super special street stage for the spectators.  Another big downpour, of rain this time, pushed everything back a bit further in the schedule.  They ended up tossing out the times for these stages due to administrative issues.

All in all, I thought Ojibwe had the best set of stages this year.  They are technical but flowy, and while we didn’t win it, we were very happy with the times!  The result is that Jordan is back in the lead by 4 points, and I will have my work cut out for me at LSPR, a rally I didn’t finish last year… but I’m ready!  (Read “LSPR: If You’re Not Getting Better, You’re Getting Worse”)

And I guess I remembered plenty 😉