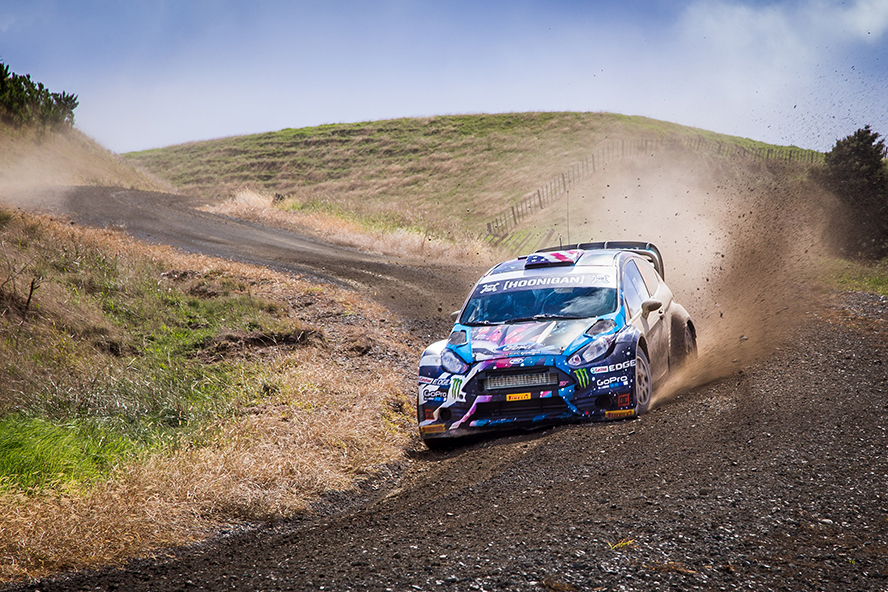 After two days of testing earlier in the week, Block started the rally on Friday night with two super specials right within the city of Whangarei. The rally had two separate events running simultaneously, the opening round of the 2015 Asia Pacific Rally Championship and the first round of the New Zealand National Championship. Block and his Ford Fiesta HFHV rally car were entered in the later. Coming out of Friday night in first overall in the National Championship Block was third overall when factoring in the competitors in the APRC event.

Saturday saw Block improve upon those standings however, maintaining the lead in the National Championship across the eight stages of the day, as well as pulling ahead of the drivers in the APRC as well (at one point in the day Block had built up almost a 30 second lead on the top APRC car, only to lose almost all of it back due to a mechanical issue), to end the day first overall in the entire event. Stats for end of day Saturday were a 1:09 second lead in the NZNC and 0.6 seconds overall in front of the top APRC driver.

Sunday had the duo maintain their rapid pace along the best rally stage roads on the planet, continually knocking down top stage finishes and building upon their leads. At the end of it all, Block and Gelsomino finished the entire event first overall, with a final time of 2:54.53.6, 36 seconds ahead of the leader in the APRC event and over 2 minutes of the leader of the NZRC event.

“I had a great event down here in Whangarei this week,” said Block. “This is the exact start to my 2015 season that I was looking for and I’m stoked that I was able to kick things off like that down here on some of the best stage rally roads in the entire world. I don’t get to do as much rally as I’d like these days since my focus is rallycross, so this was awesome. The whole event was a ton of fun, from our testing earlier in the week to the stages during the event. I’d also like to compliment the event organizers for putting on a world-class event and the fans for coming out to support. I’m definitely looking forward to Otago in a few weeks on the south island, hopefully I can add another win to my season.”

With the win at Whangarei, Block becomes the first non-New Zealander to ever win Whangarei and the first American to win an international rally in recent history. Block’s next competitive event is Rally Otago, May 8-10, which also takes place in New Zealand.

Images and story by Hoonigan Racing