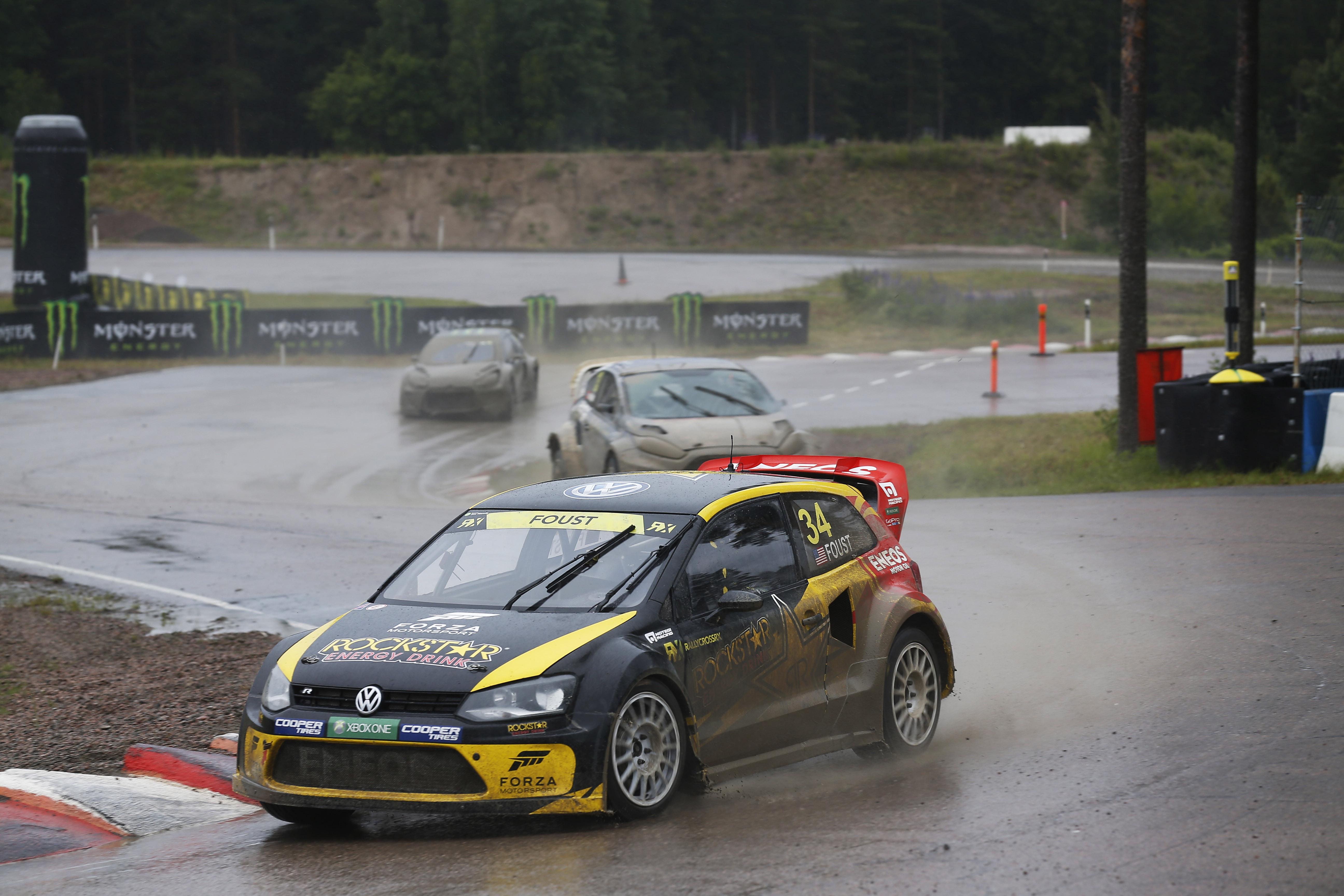 An estimated 15,000 spectators attended the Finnish RX round this weekend to watch 24 Supercars battle it out in Kouvola, renowned as one of the most technically challenging circuits on the World RX calendar.  Heavy rain added extra pressure for the drivers who were also forced to contend with a treacherously slippery track. Joining the headline Supercar category over the weekend were 11 Touring Car entries, 16 Super1600s and 10 entries in the supporting RX Lites Cup.

Foust was pleased with both his performance as well as the Marklund Polo RX Supercar. “I’m absolutely delighted,” beamed the two-time Formula Drift Champion who will also compete at World RX of Canada and Turkey later this year.  “This is such a challenging track and with rain it is unbelievably difficult.  When you’re not at the front it’s murder to see where you’re going as the car is caked in mud from the moment you’re off the line.  I have to say the Polo is very, very good. The VW Marklund team have done an excellent job with the car.”

Runner-up Bakkerud echoed Foust’s sentiments.  “The rain made everything so much harder today,” explained Norway’s Bakkerud who is now been catapulted to second in the overall standings.  “It’s impossible to see anything behind you at all in those conditions but it was for the same for everyone so that’s how it is.  I think myself and Reinis [Nitiss] showed good pace this weekend and it’s important for the Championship standings too.  I was second in Portugal, first at Lydden Hill, second here so maybe in Sweden I can be on top once again!”

Despite limited experience driving his Fiesta Supercar in the wet, Nitiss proved himself once again as one of World RX’s brightest young prospects.  For the fourth time this season, 18-year-old Nitiss won his semi-final race to progress into the all-important final where he was pipped to the post by team-mate Bakkerud. “This has been an amazing weekend, I am so happy,” grinned Nitiss who has now extended his Championship lead to 14 points.

Krzyszstof Skorupski shone at this weekend’s World RX of Finland quietly plugging away throughout the heats to secure himself a spot in the semis for the Monster Energy World RX Team.   Lined up alongside Bakkerud, Nitiss, Joni-Pekka Rajala and Team Peugeot Hansen team-mates Timmy Hansen and Timur Timerzyanov, Skorupski finished the second semi-final in third place.  A mature drive in the final awarded Skorupski with fourth place and his first top five finish of the season.

After two heat wins and second place in the first semi-final, Sweden’s Anton Marklund was on course for a podium finish this weekend.  However, the arduous conditions proved too much for the 21-year-old Swede who was unable to keep up with pace-setter Foust. He finished the weekend in fifth. Team-mate Topi Heikkinen made it through to the semi-finals but a tussle with Britain’s Liam Doran and Ireland’s Derek Tohill saw all three drivers retire and miss out on a chance in the final.

It was a weekend of mixed fortune for Team Peugeot Hansen as both drivers made it through to the semis but failed to make the final six. Team-mates Timmy Hansen and Timur Timerzyanov leave Finland with a healthy points haul to lie sixth and seventh in the overall driver standings.  Following an incident on the third heat which saw Timmy Hansen roll his Peugeot 208 Supercar, Team Manager Susann Hansen praised the efforts of their mechanics to repair the car before the next race: “The team did an absolutely fantastic job to fix the car in less than an hour.  We are so blessed to have such a wonderful team.”

PSRX frontman Petter Solberg qualified for today’s final despite damage to his Citroen DS3 Supercar following an impact in the penultimate race.   The damage incurred to the car proved too much and the Norwegian was unable to start the final.

After two heat wins plus a semi and final victory, Russia’s Nikita Misiulia won the Super1600 category. Second place was awarded to Janis Baumanis, with Rasul Minnikhanov finishing third. Round one and two winner Sergej Zagumennov continues to lead the category with 101 points.

In the TouringCar category, Daniel Lundh clinched the victory in his Volvo C30 and extended his lead in the standings to 90 points. Ford Fiesta drivers Jari Jarvenpaa Lundh and Torleif Lona took second and third respectively.

Martin Anayi, World RX Managing Director for IMG Motorsport, concluded: “What an action-packed weekend it’s been in Kouvola.  Nobody could have predicted the action we witnessed today and the non-stop entertainment in World RX is what the fans love about this sport.  It also creates drama from start to finish for our broadcasters across the globe.  Kouvola is known for its changeable weather but today’s rain created a mud bath, it’s a real testament to those drivers who made it through to the final.  Normally rallycross is all about how fast you can drive but today drivers had to find the right balance between pushing and knowing when to hold off the throttle.  Tanner managed this perfectly.  Now we have had four different winners from the opening four rounds of the season, which just goes to show how many competitive drivers we have as part of our Championship.”

There will be little time to rest for the World RX crews as round five of the Championship, Volkswagen World RX of Sweden, will take place in Holjes next weekend (5-6 July).

DRIVER POINTS AFTER ROUND 4, WORLD RX OF FINLAND

TEAM POINTS AFTER ROUND 4, WORLD RX OF FINLAND