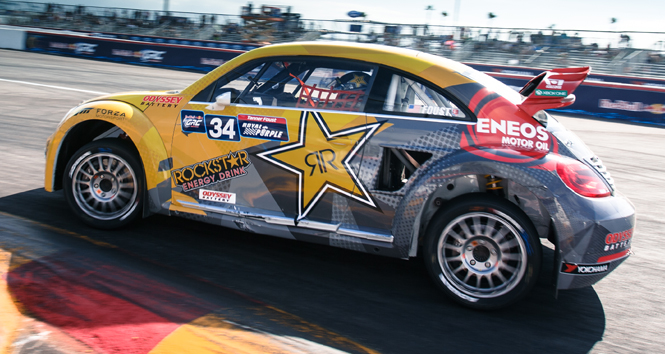 The biggest splash of the 2014 Red Bull Global Rallycross offseason came in February, when Volkswagen announced a two-car factory program in cooperation with Andretti Autosport for drivers Tanner Foust and Scott Speed. Stealing the show was the unveiling of a GRC-spec Beetle, with plans to debut sometime during the 2014 season.

Last month, Foust got his hands on the Beetle for the first time, putting the car through the gauntlet with three races in eight days in Los Angeles and Seattle. After taking a victory in the car’s very first heat, the two-time series champion had plenty of nice things to say about his new ride. 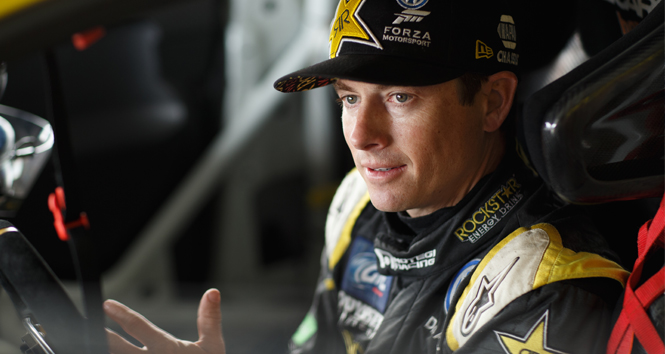 “The Beetle was built for the ground up specifically for GRC, and it feels like that,” Foust said. “Everything works, it’s easy to drive. It’s a little bit bigger than the Polo, and right now we’re not able to really take advantage of the weight savings we could get with the 1.6 (liter engine), but this is still a bit of a testing phase. But even with that considered, the 1.6 is working hard, and it’s putting down some power.”

The Beetle differs significantly from the Polo that Foust started the season with. The key difference, as Foust mentioned, is the smaller engine, which affords the team a weight savings under Red Bull GRC rules. But the geometry of the car is significantly different—and the additional overhang of the car’s bumpers has given him something to think about when taking the series’ signature jump. 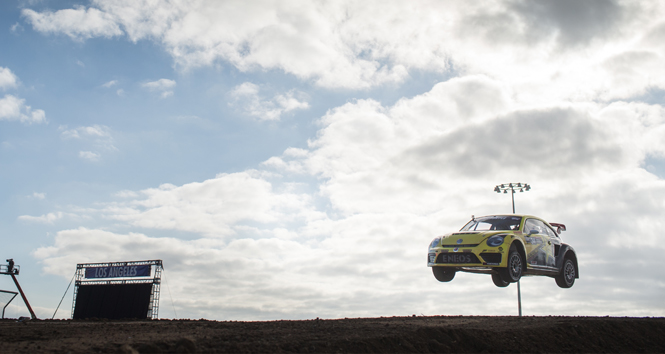 “I’m definitely taking it a little easy over the jump, partly because of the overhang,” he noted. “But there’s certainly a lot of rally car heritage built into the Beetle, and the purpose of racing it in the heat of competition right now is to engrain a bit of rallycross DNA into the car. Working on how to make a mistake over the jump is one of those.”

In its three races, Foust took the Beetle to last chance qualifier victories in Los Angeles I and Seattle, only to suffer setbacks in both of those main events. An engine failure dropped him from a strong fourth place in the former, while joker lane contact with Ken Block ended his race early in the latter. 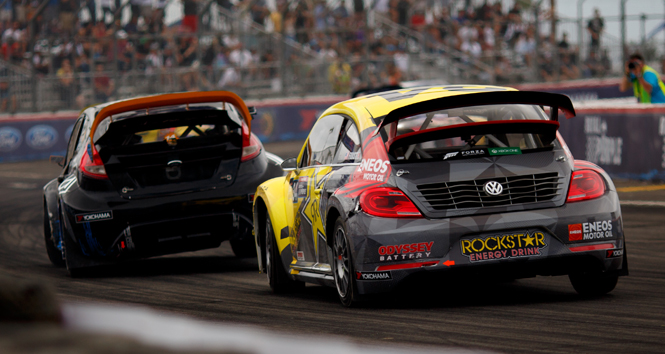 Still, Foust and the Volkswagen team remain undeterred. “If we wanted to just track test the car, we could do it alone,” he explained. “Part of rallycross, racing the car here and testing it that way, is seeing how it responds to a little bit of contact here and there.”

With four events under the Beetle’s belt at the conclusion of this season, there’s no doubt that the information learned in 2014 will give Foust a jump on returning to his typical championship-caliber results next season. 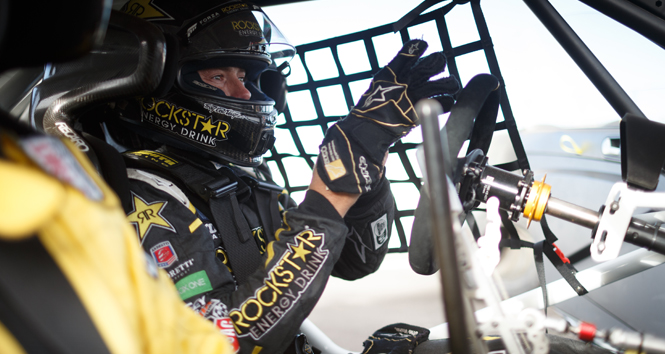 “I’m really happy,” he concluded. “We still have a lot of things to iron out, but that’s one of the great things—with Volkswagen’s commitment to GRC in 2015, we’re able to use some of the races this year to come in full sprint ready for the championship (next year).”