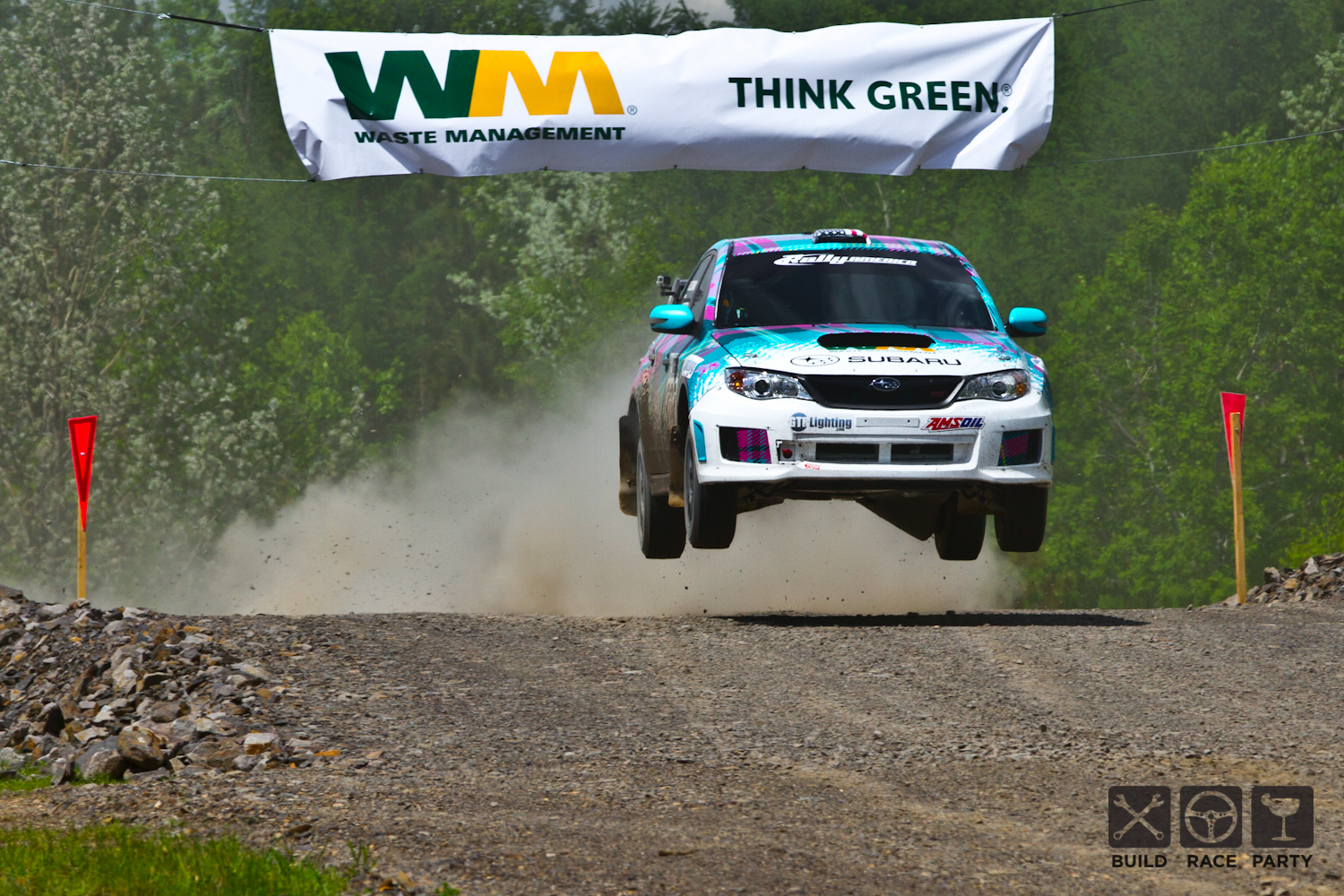 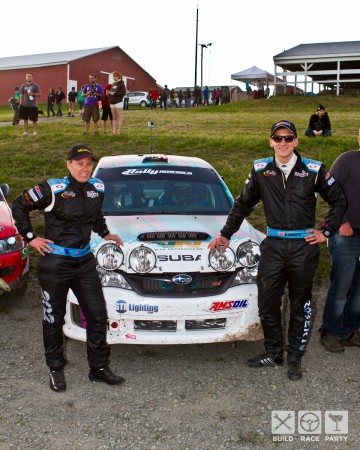 After the fire that destroyed Nick Roberts’ Subaru STi, he had only a few short weeks to rebuild, but on the morning of May 30th he and Rhianon Gelsomino found themselves on The Green in Wellsboro, Pennsylvania awaiting the official start of the Susquehannock Trail Performance Rally.

They were both fresh and full of energy, greeting the swarm of rally fans that had filled the Green.  Even through the energy of the morning they both still needed to find their rhythm and confidence after the terrifying malfunction that had halted their last push to the podium.  The team also had to face the challenges of driving a completely new car.  Throughout the event the car was still settling and breaking in as Nick sped through the stages slowly gaining his confidence back.  The new STi was built with a different roll cage design, shifting Nick’s seating position, making the perspective and weight transfer of the car somewhat unfamiliar. 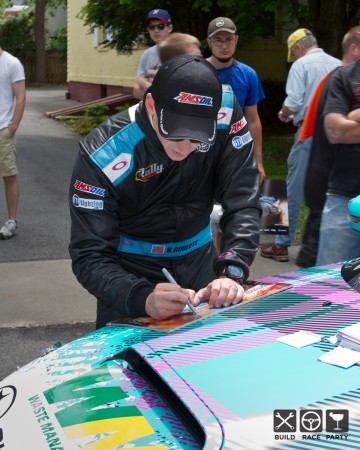 The stages of STPR are incredibly tight and technical, and is considered one of the most difficult rallies of the Rally America season.  For many, the rally is more a fight for survival than a competition, with tight turns and undulating roadways, the drivers must always be aware of the ever changing camber.  Often dropping to one side or the other the roads force the cars through corners that can quickly become off camber, throwing cars into the woods.

Stage 1 found Roberts and Gelsomino attempting to find their rhythm through the Waste Management stages.  Something new this year for the spectators was a huge jump constructed specifically for the event.  Despite trying to bleed off as much speed as possible Nick hit the jump that would become the largest in his career.  Nick knew that the car was front heavy, and instead of risking smashing the front into the ground he attempted to ease the car over.  He landed in a dip in the road just after the jump, slamming the car violently into the ground, breaking the rear passenger control arm.  Despite the damage, Nick and Rhianon found themselves pushing hard and gaining speed moving into 2nd place in Super Production.  The teams expert crew made short work of the control arm replacement, only spending a few precious moments to replace it. 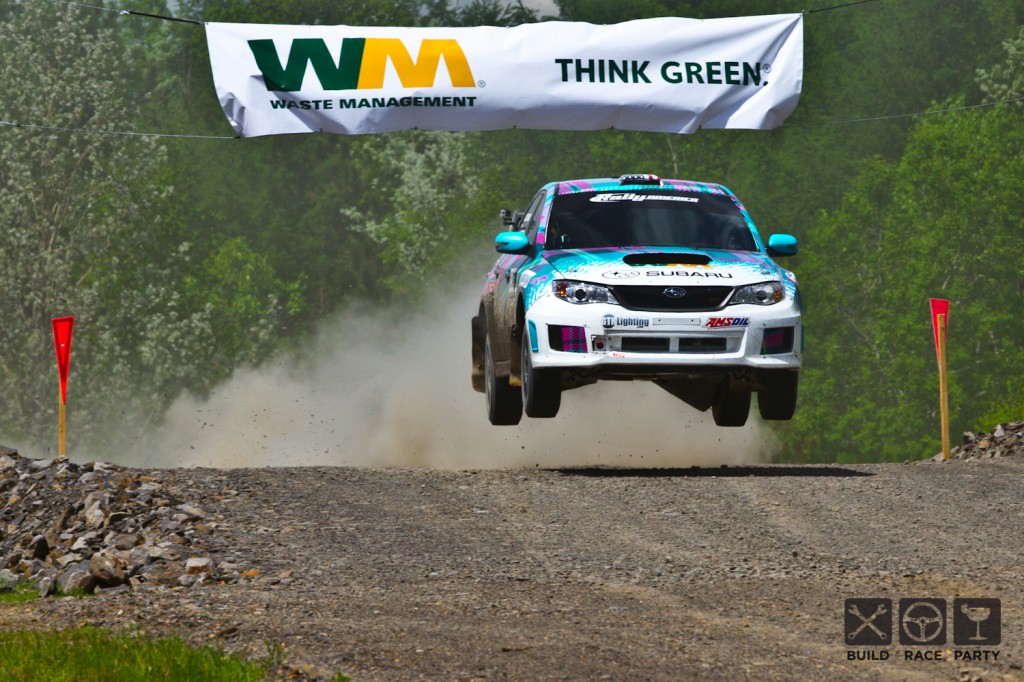 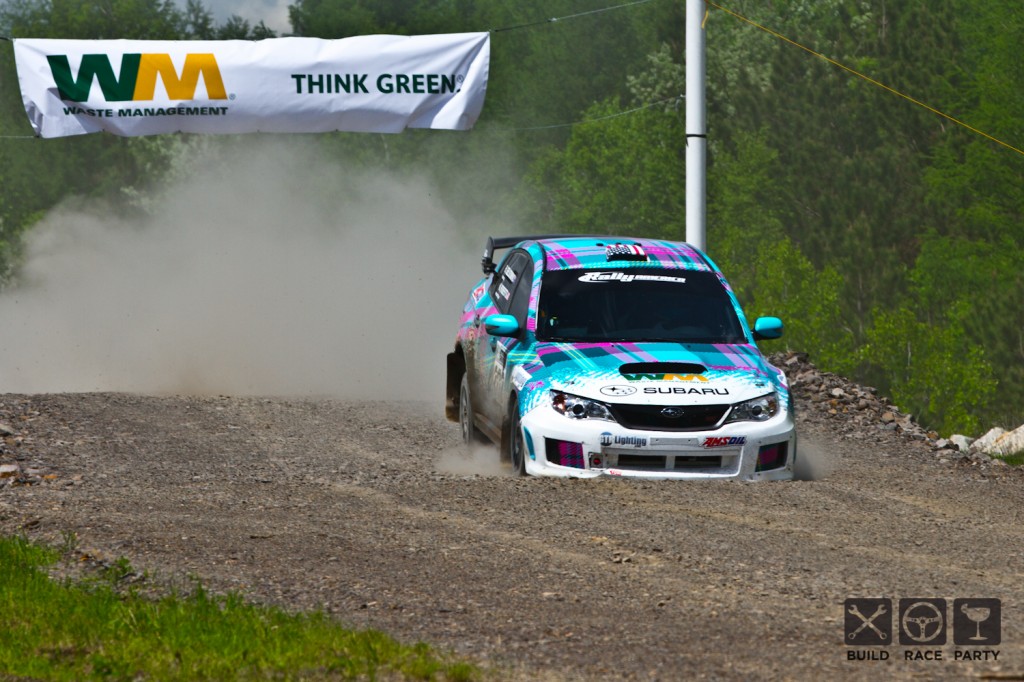 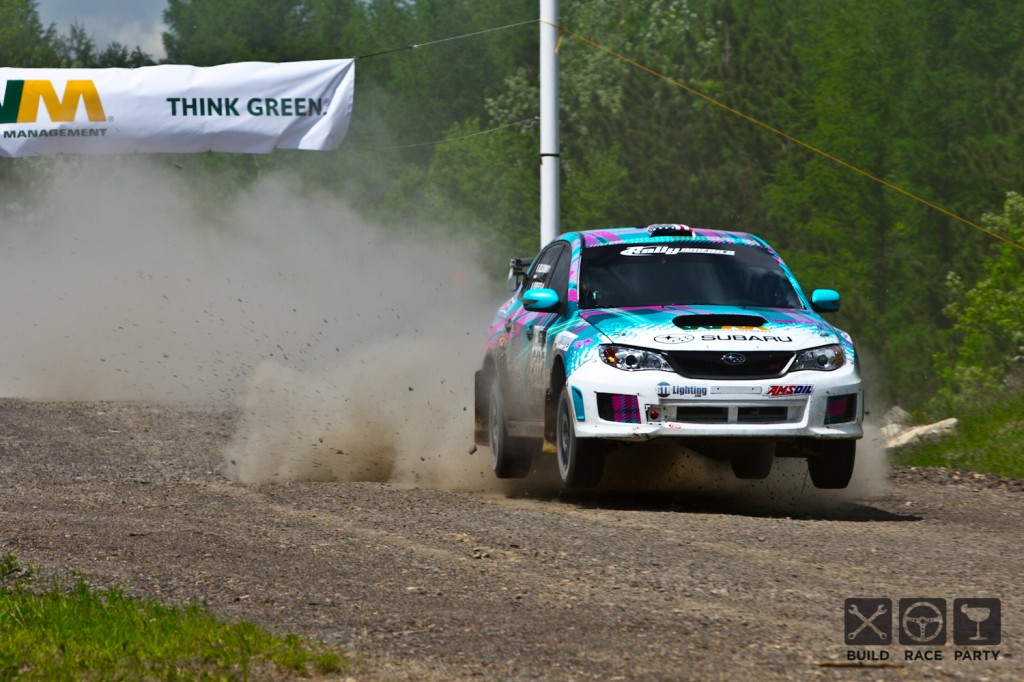 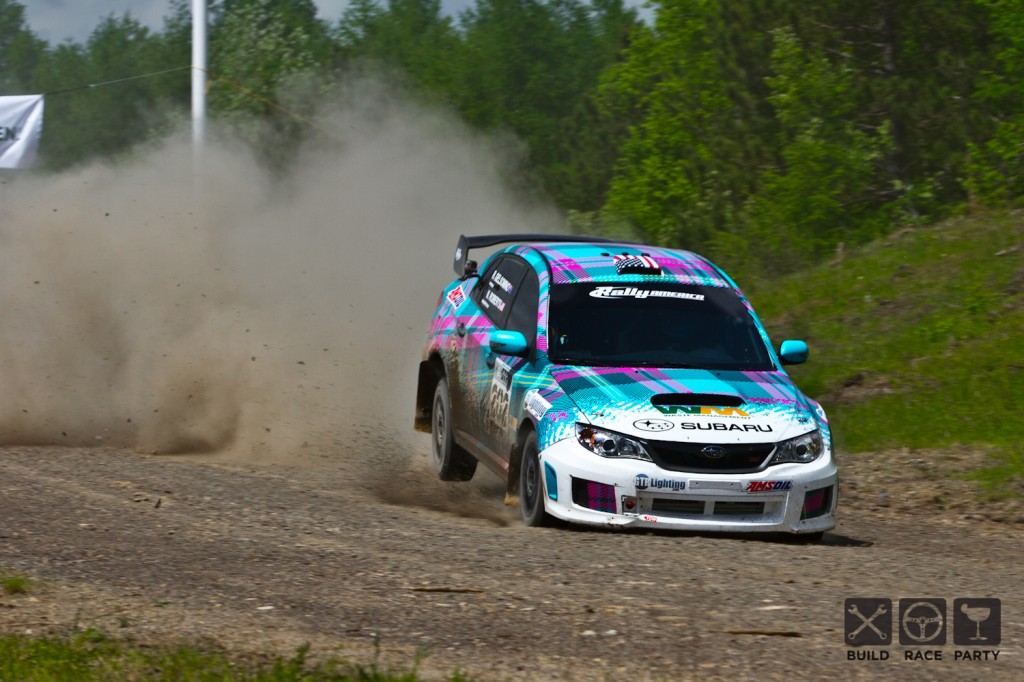 Despite the rough landing, and freshly broken control arm, Nick manages to keep his line and push on. 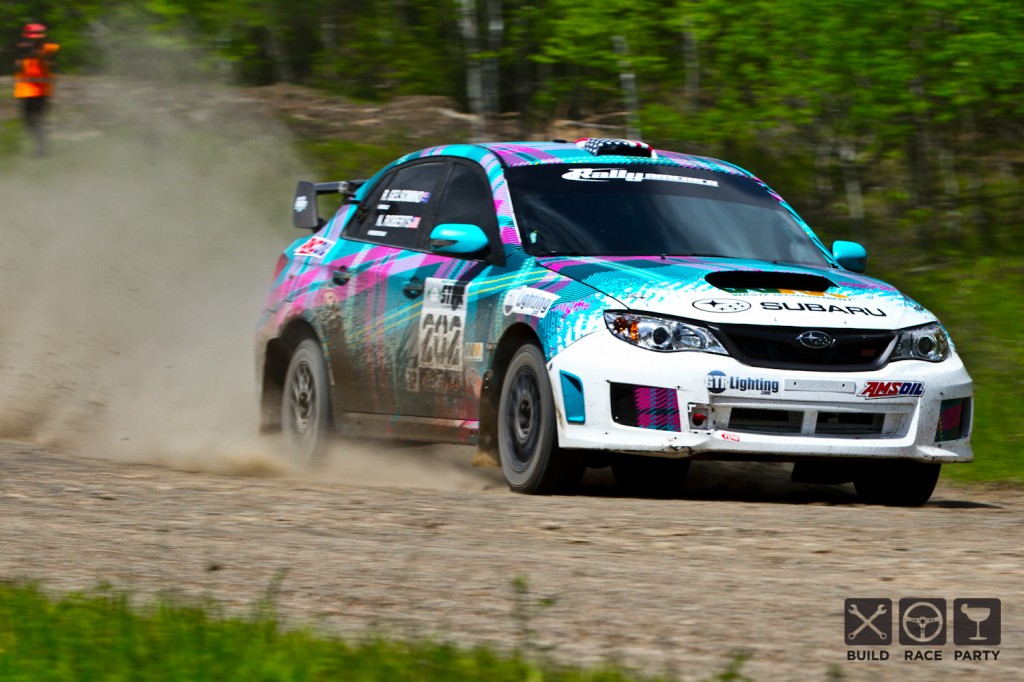 On SS3, the reverse of SS1, Nick took the jump with a bit more caution: 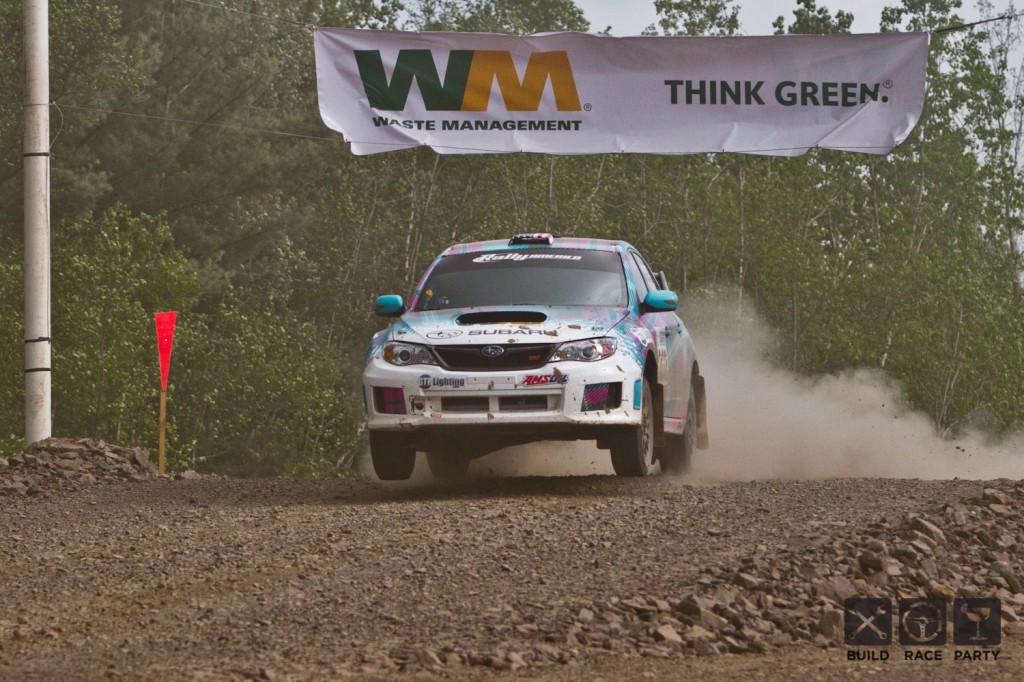 Team mechanics getting the car ready for the night head to head stages at the fair grounds. 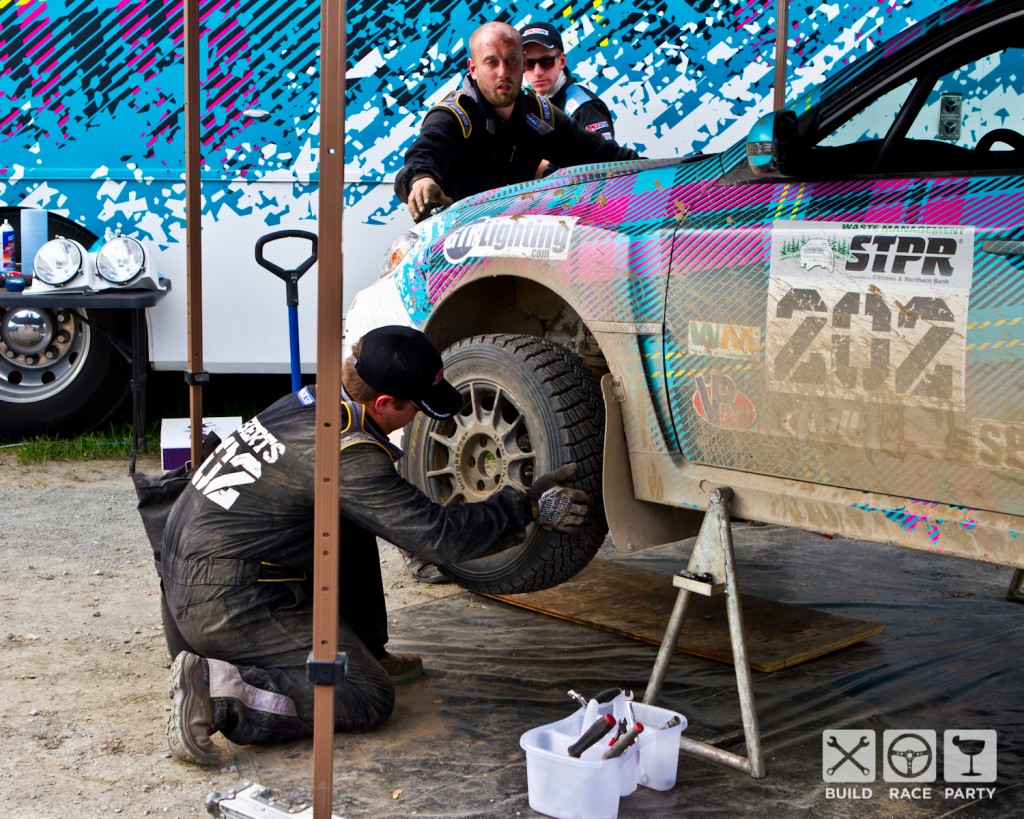 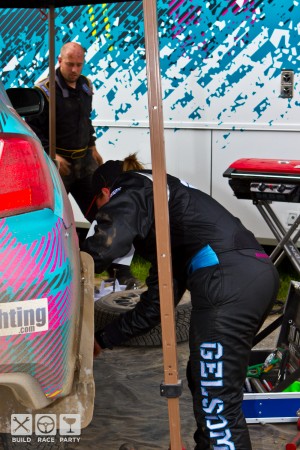 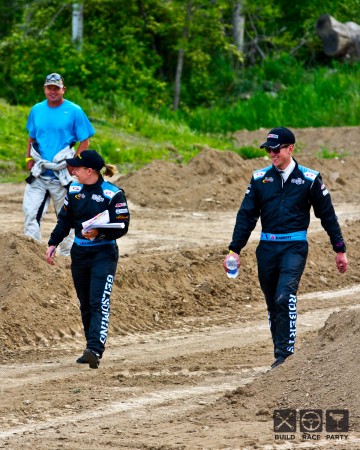 The head to head super special runs for Nick and Rhianon were cancelled due to incredibly high levels of dust being kicked up on the Tioga Fair Ground’s stage.  Not feeling completely satisfied with the car’s performance, the team swapped to stiffer springs, hoping to gain a bit more feeling and control through Saturday’s stages.

The first stage Saturday morning provided the team with a big moment.  Stage 6 was an incredibly technical and fast stage, Nick entered one high speed corner, cutting a little to tight,  the front of the car bit the inside edge of the turn and almost sent the car into a roll.  Nick was able to recover and they continued on with the first three stages of the day.  On stage 7 the team gained back more of their confidence, making up time they had lost in SS6 and pushing their way back into 2nd place.  The team lost some time again, however, on SS8 when they came upon someone waving their arms, in an appeared attempt to stop or slow the car.

Nick transitioning between a right 2 into left 2 on SS7 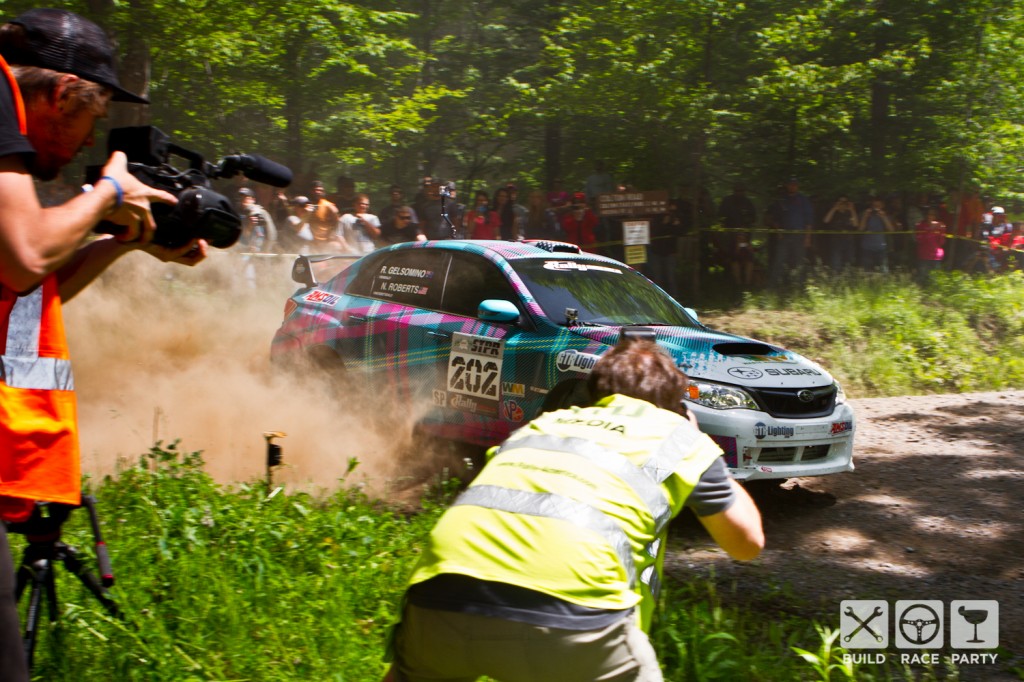 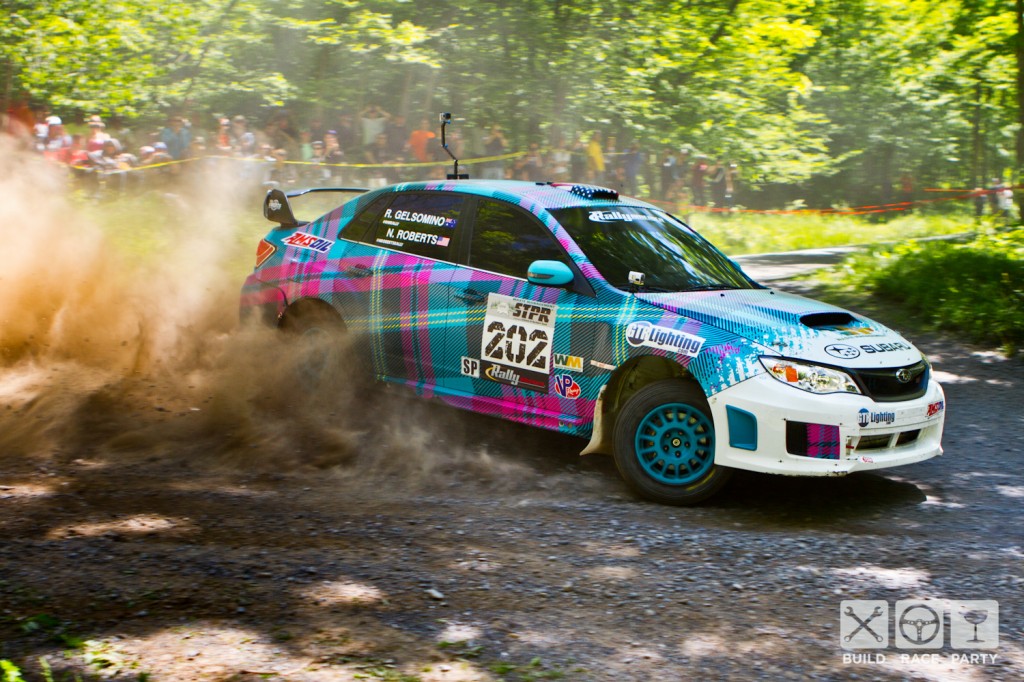 Both Nick and Rhianon were in high spirits at service before SS9, Roberts was extremely happy with the new setup and much of his confidence had returned, they both admitted that they were having a lot of fun out on the stages, even with the few scary moments the team met along the way. 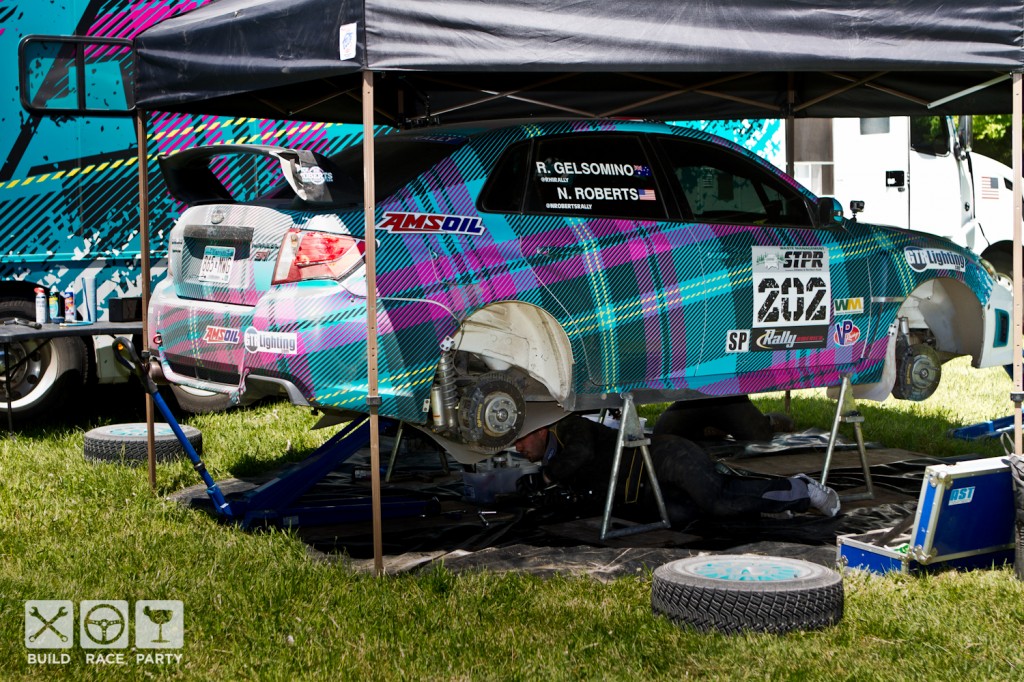 The team, feeling good and finally flowing, put down a great pace the second half of the day, but not without some difficulties.  On two separate occasions the team caught cars, the first was Dillon Van Way, whom was suffering from engine problems.  The second car was Garry Gill.  Rhianon estimated that had they not been stuck in the dust of the two cars, they could have easily shaved an extra minute and 50 seconds off their times that afternoon.  Nick almost ended his rally when he slid sideways into a ditch,  luckily they were able to quickly get out and continue on.

Nick and Rhianon push around a hairpin on SS12 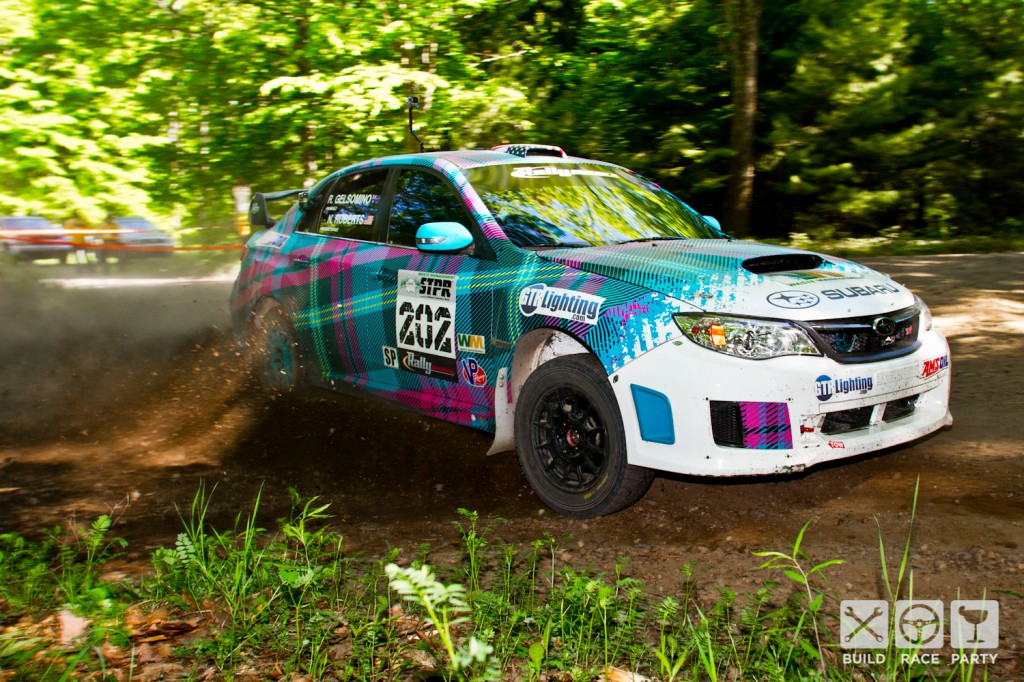 During service, the mechanics waste no time getting started on the car, not even giving  Nick time to get out before it’s jacked up. 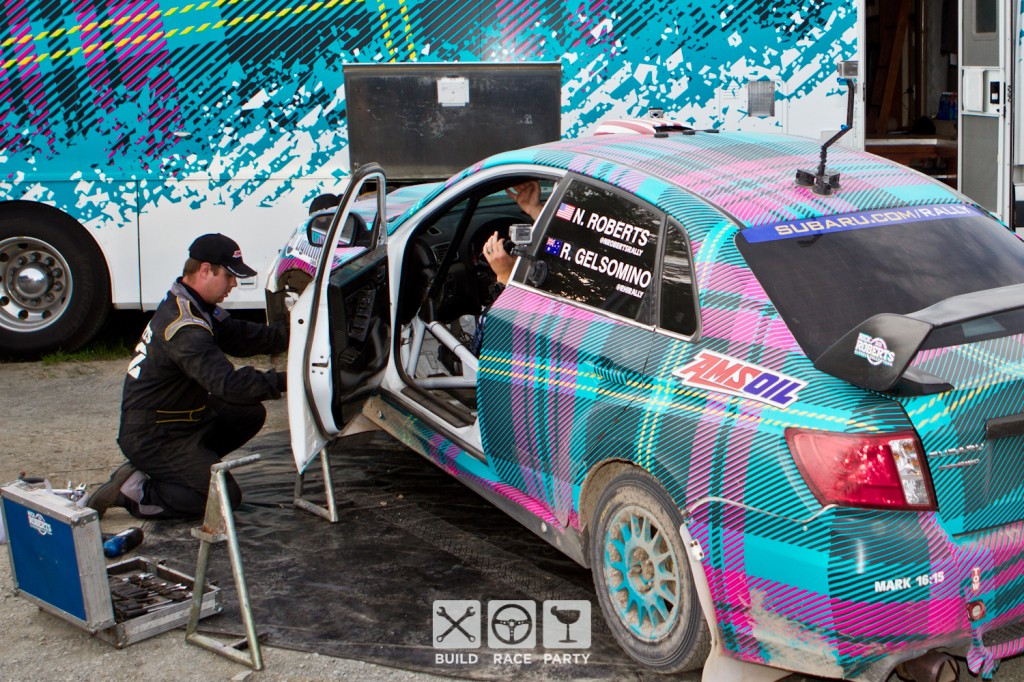 While the mechanics work on the car, Nick and Rhianon take a few minutes to meet with fans. 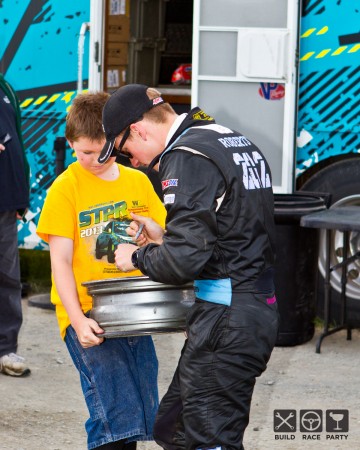 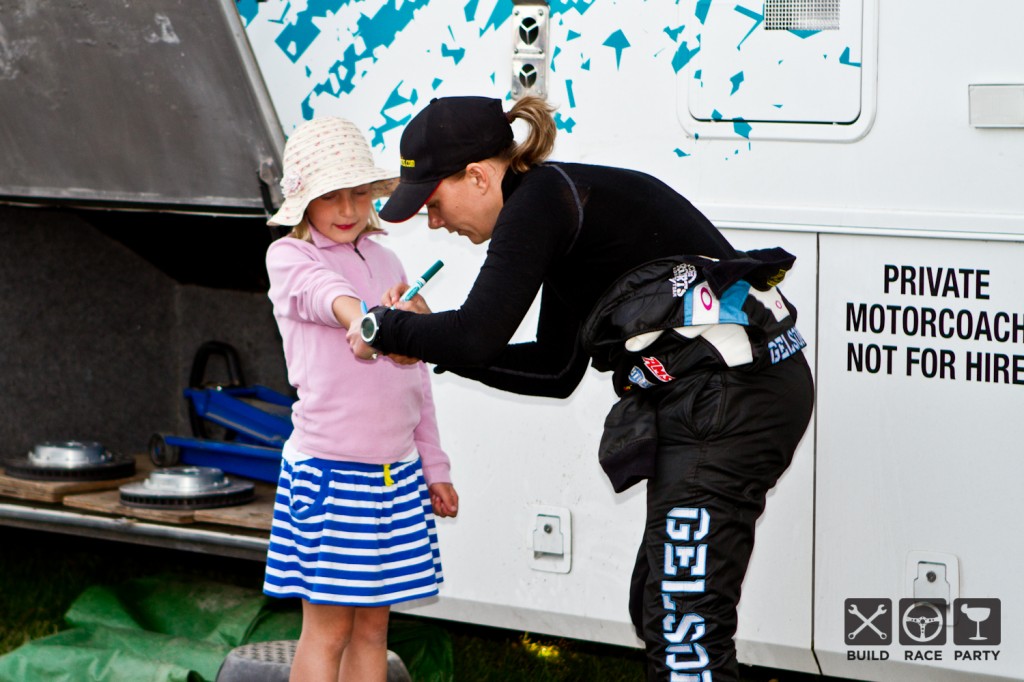 With Van Way’s engine seized, Nick had a very real chance to get into 3rd place.  Finally just before he needed to run, Van Way managed to get his engine going with the help of another competitor pulling his car.  Van Way’s car lasted long enough for him to pass the start and grant him a bogey time.  This meant on the head to head run Nick needed to be quick.  In the end, he managed to creep ahead and finished 3rd overall behind David Higgins and Garry Gill.

Van Way attempts to get his engine running while in time control. 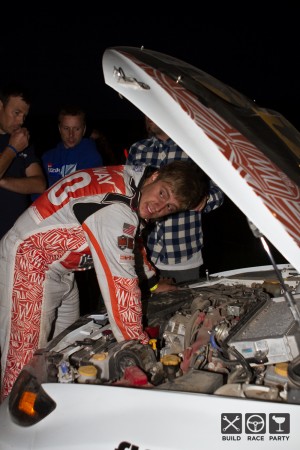 After such an incredibly difficult event, both mentally and physically, I think Rhianon, very succinctly summarized their experience.  “It wasn’t easy today. It was a character building day. We’ve had many things happen this weekend and to come back from the fire from the past event, it hasn’t been easy, but we’ve worked really hard together. Nick’s driven really well and at the end of the day this is only Nick’s tenth rally. I think some of us forget that, when he’s doing the speeds and getting the results he is.” 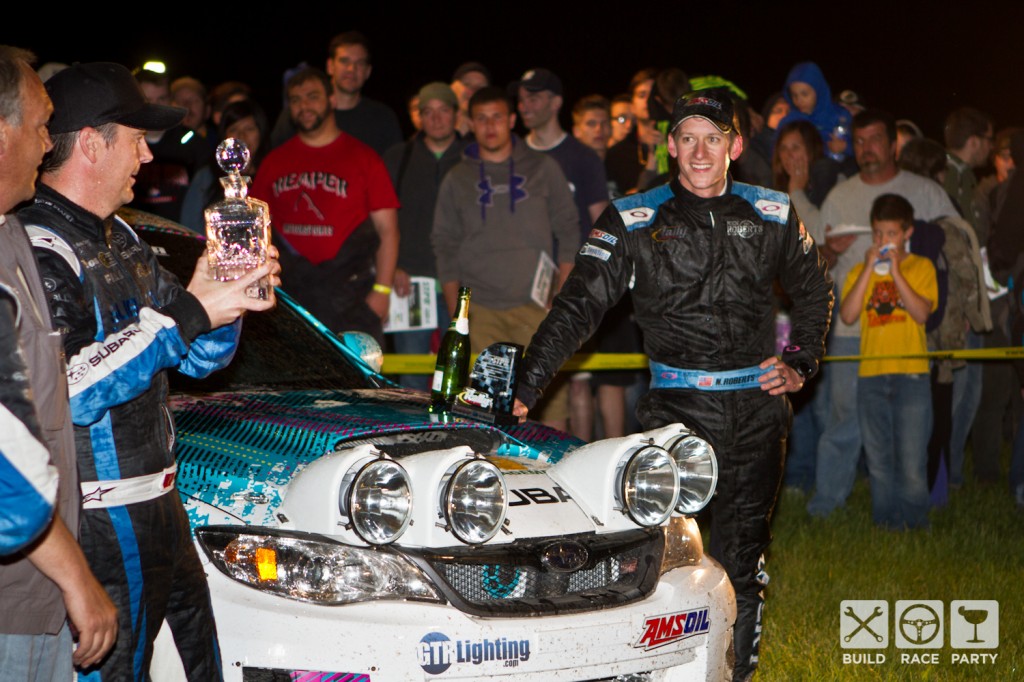