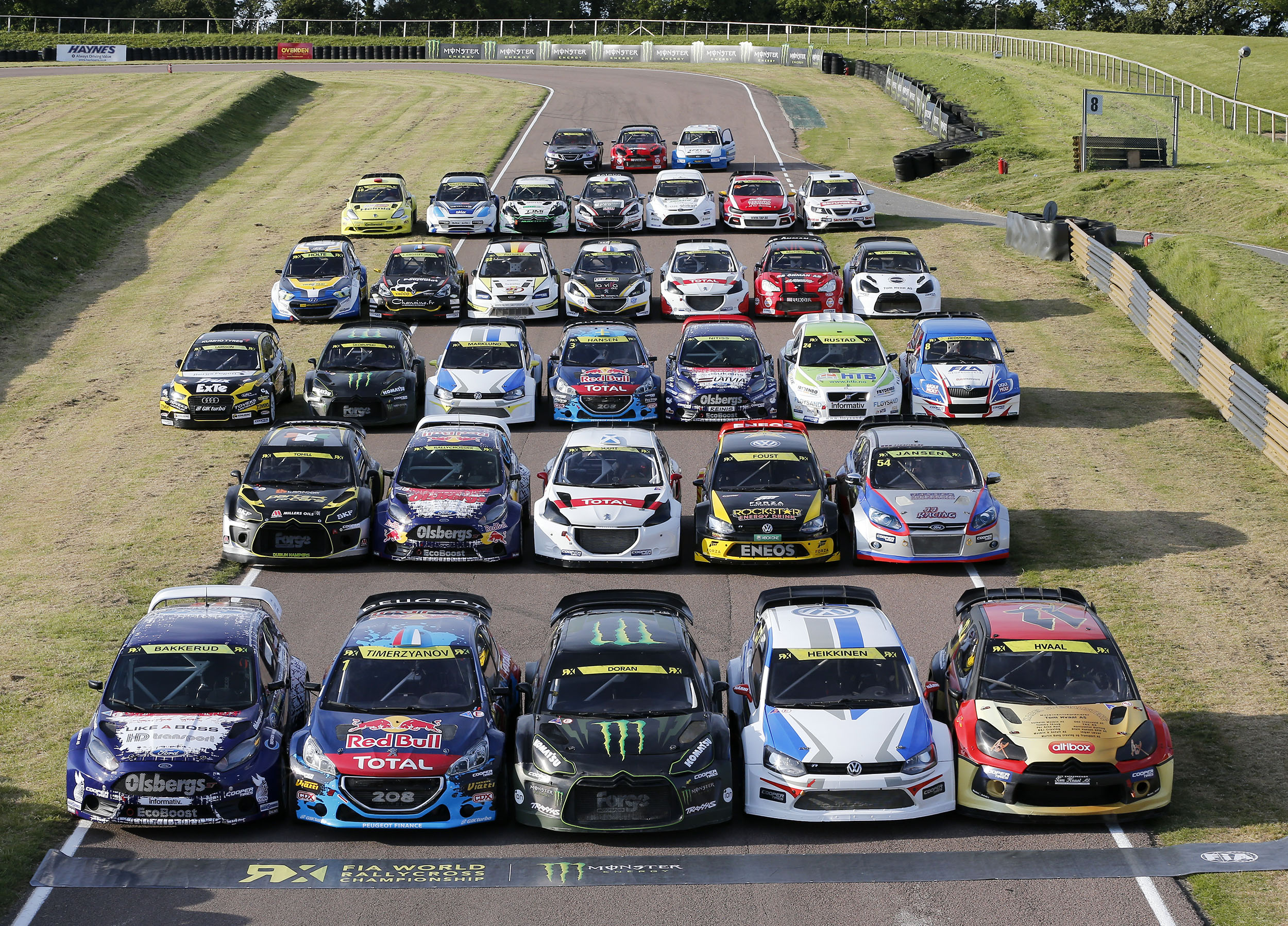 Andreas Bakkerud won the inaugural AUTOSPORT World RX after a thrilling Supercar final in front of a huge bank holiday crowd of more than 10,000 at Lydden Hill in Kent. 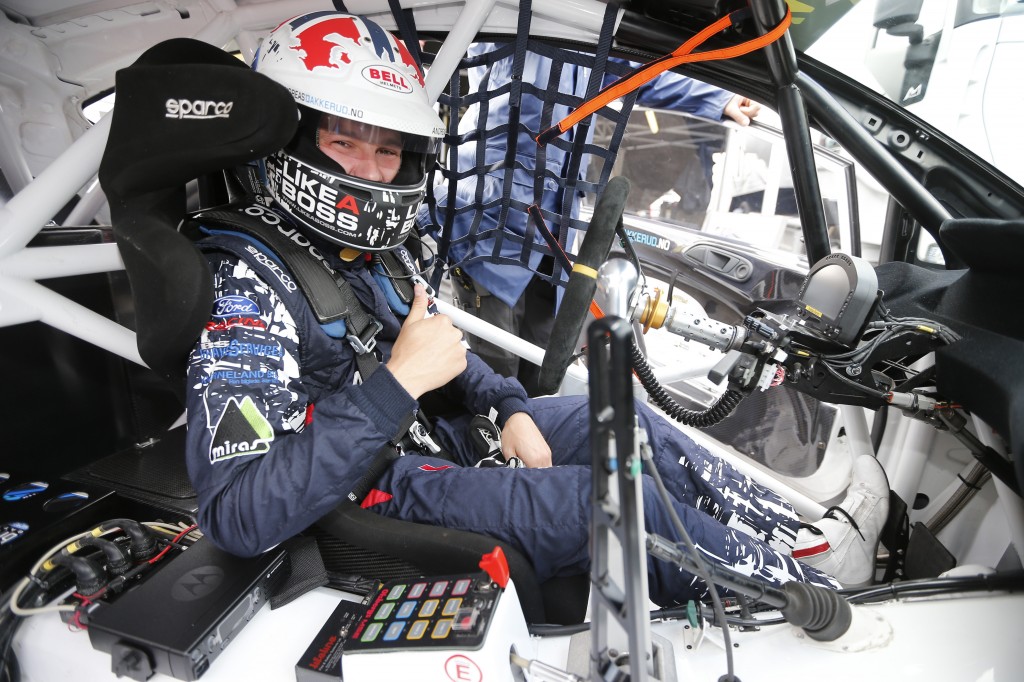 With victory, the 23-year-old Norwegian made motor sport history as the first ever winner of a round of the new FIA World Rallycross Championship staged on British soil. Rallycross’ graduation to world championship status comes nearly 50 years after the spectacular hybrid sport which mixes the best of racing and rallying was born at Lydden in 1967. 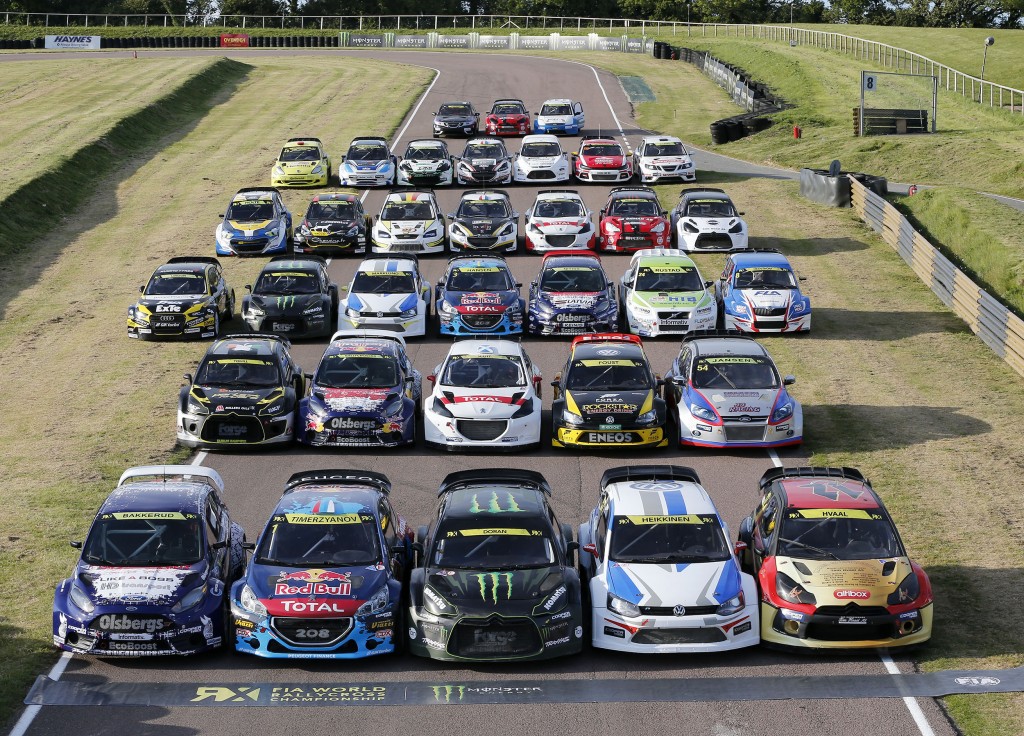 A record line-up of 37 Supercars started the weekend gunning for glory on what is the fastest circuit on the World RX calendar. All contested four heats, with the top 12 performers qualifying for Sunday afternoon’s two semi-finals. 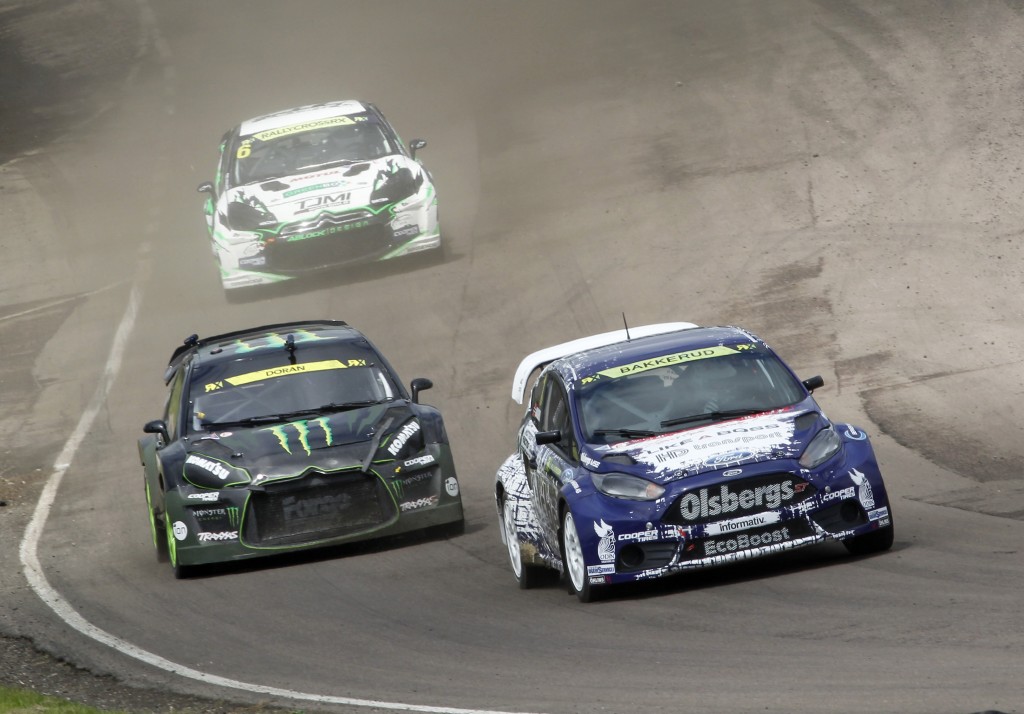 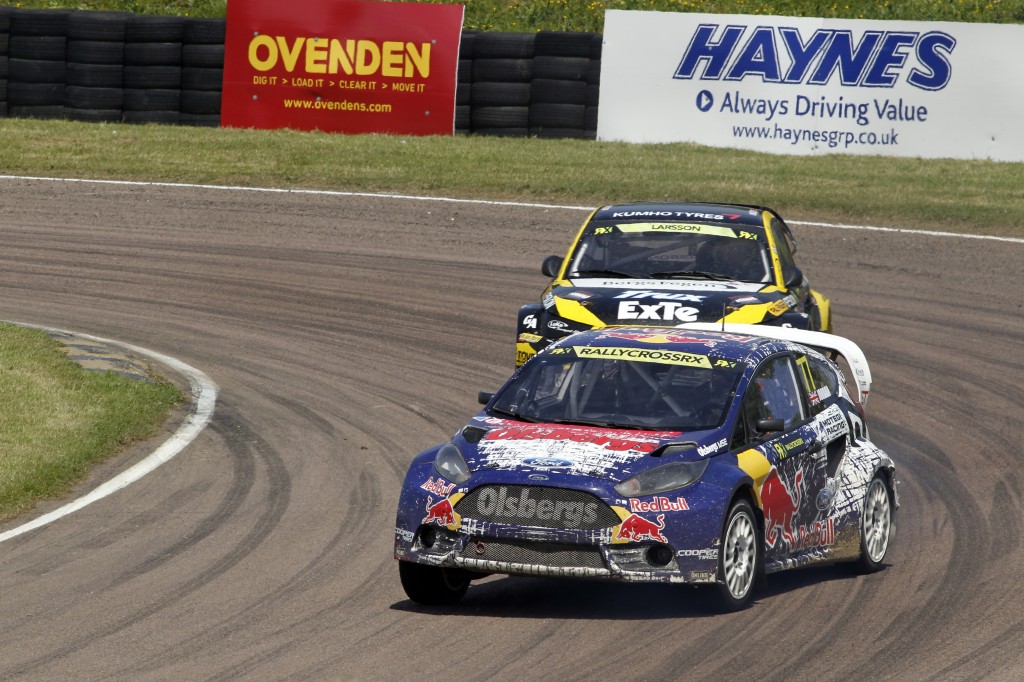 There was drama in Sunday morning’s opening heat when both Solberg and Foust missed taking their slightly longer ‘joker’ laps, costing them 30-second time penalties and dropping them down the order. Heikkinen, though, made no such mistakes to grab the overall lead from Bakkerud. 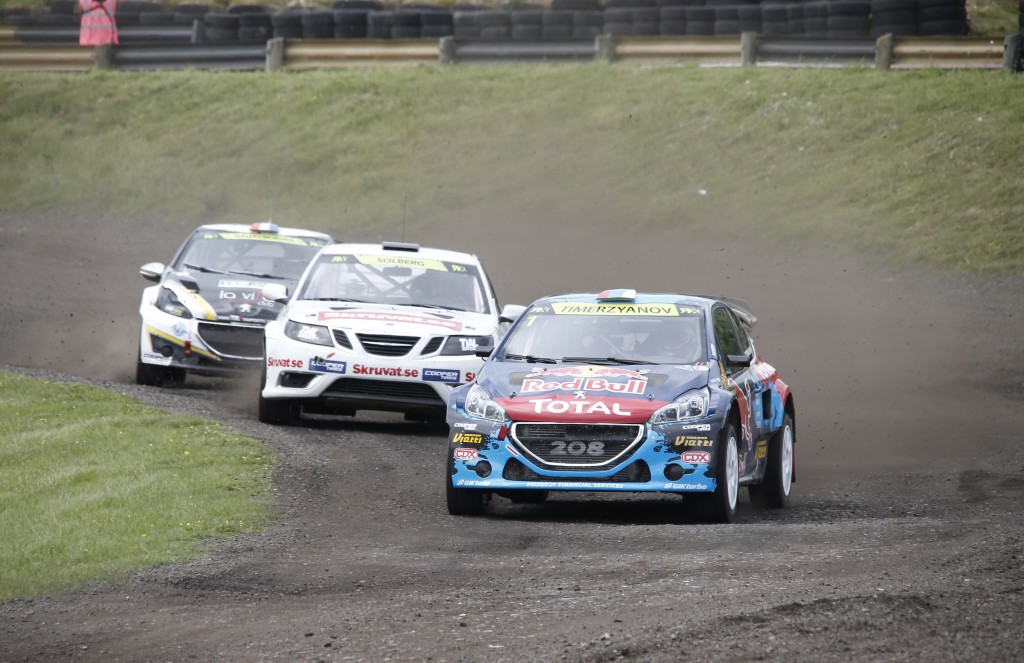 The fourth and final heat saw Solberg and Foust battle back with fastest times to secure their spots in the top 12 shoot-out. 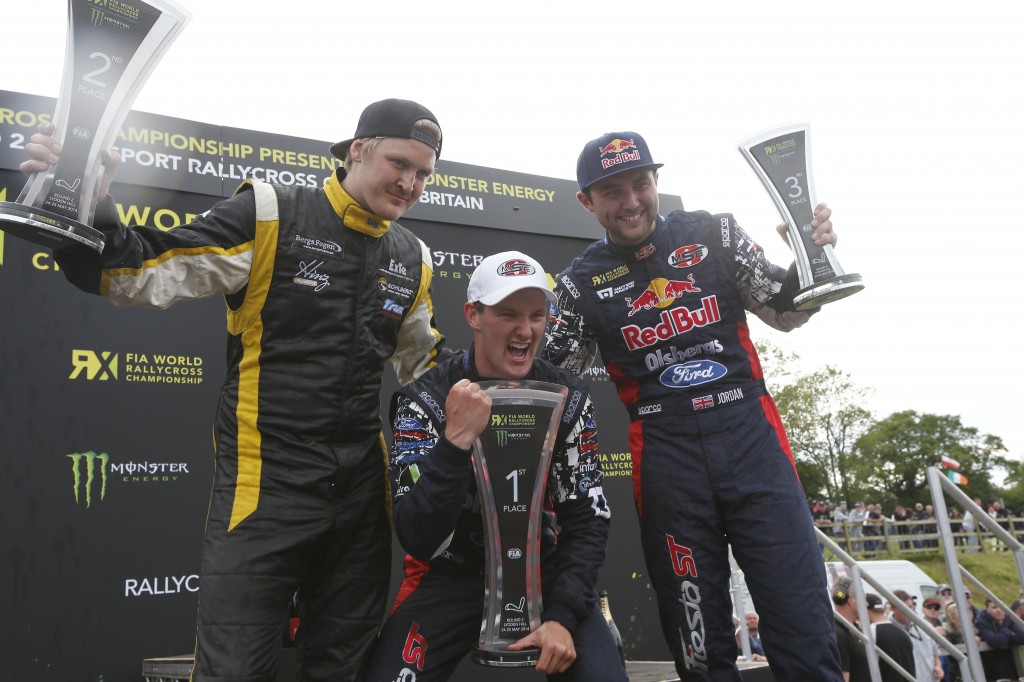 With such fierce competition, several of the fancied front-runners failed to make the pair of fast and furious semis. Among those not making it through to the knock-out stage were local favourite Liam Doran who suffered a forgettable weekend on home soil and British champion Julian Godfrey. Andy Scott, however, did just scrape through to the semis grabbing 10th position in his Peugeot 208. 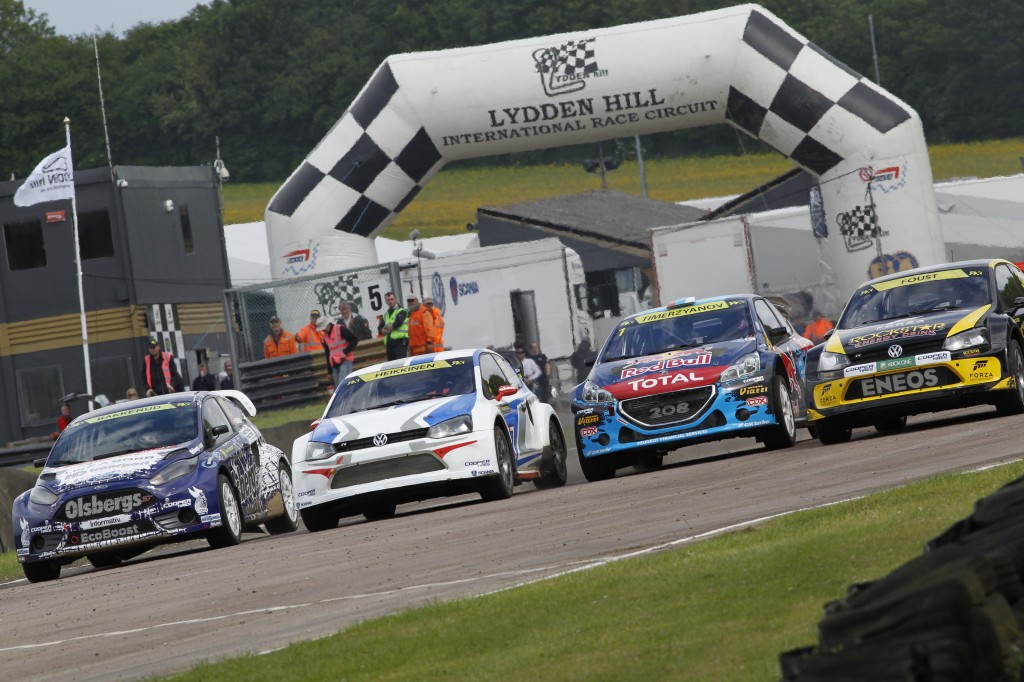 With top guns Bakkerud, Heikkinen, Solberg and Foust on the grid, the first semi was always going to be cracker with only the top three progressing to the grand final. It was the fast starting Solberg who blasted past pole-sitter Bakkerud to grab the early lead but Heikkinen took his ‘joker’ lap and jumped both of them as the race unfolded. All three would progress to the grand final. 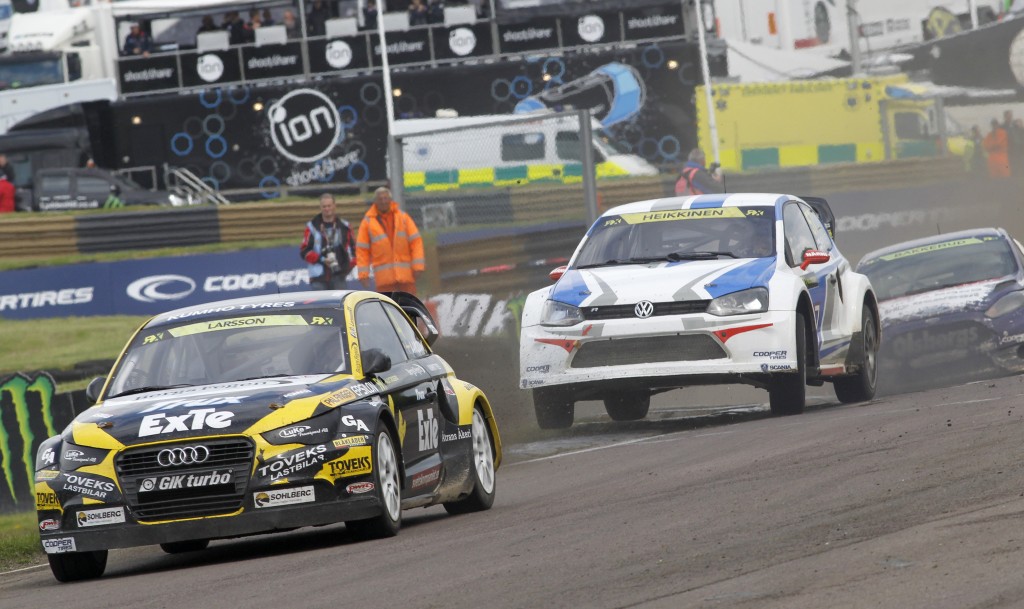 Scott and Jordan lined up in the second of the two semi-finals, which was won by Latvian rising star Reinis Nitiss. The impressive Audi A1 of Robin Larsson roared home second with Jordan – much to the crowd’s clear delight – claiming the last spot on the grid for the final. 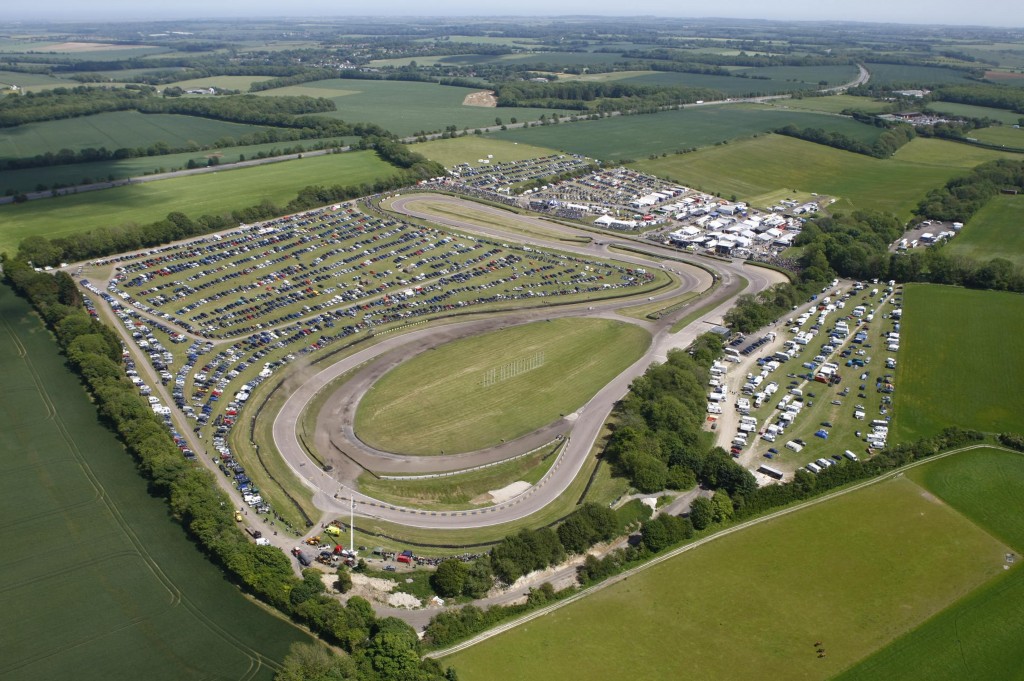 There was excitement even before what turned into a rousing six-lap final. Nitiss’ Fiesta failed to make the grid with a technical issue, handing a surprise starting position to Foust – and the American was immediately in the thick of the action as he and the fiery Solberg clashed on the second lap.

As the others squabbled, Larsson made his escape but behind, Bakkerud was flying having wasted no time taking his joker on the opening lap. Cheered on by the huge crowd Jordan, too, was on the move using his racing skills to squeeze past Heikkinen at the hairpin. The action was flat-out and frenetic.

Both Larsson and Jordan waited until the final tour to take their joker laps, rejoining hot on the heels of leader Bakkerud. At the chequered flag, it was the young Norwegian who just grabbed the coveted spoils from Larsson and a delighted Jordan, with little more than a second covering the top three.

The result has vaulted Bakkerud to the top of the World RX title standings ahead of the next outing on home turf at Hell, Norway in mid-June, with countryman Solberg in hot pursuit.

“I grew up in rallycross paddocks, so to now win a world championship round is just amazing!” said a jubilant Bakkerud. “A big dream of mine came true today. We were consistent all weekend, showed good speed, made no real mistakes and played the right game.

“I made a bet before this weekend with the biggest broadcaster in Norway that I would grow a moustache if I led the world championship going to the next round, so now I guess I need to get on with that – and I promise you all I’ll put on a Hell of a show there!”

“If you had offered me a podium back at the start of the weekend, I would definitely have taken it!” quipped Jordan. “We were quick throughout but I still never thought a podium would be possible – to achieve it in my first world championship event and on home soil, I honestly can’t believe it. The support from the crowd was fantastic, too. I really couldn’t have asked for very much more.”