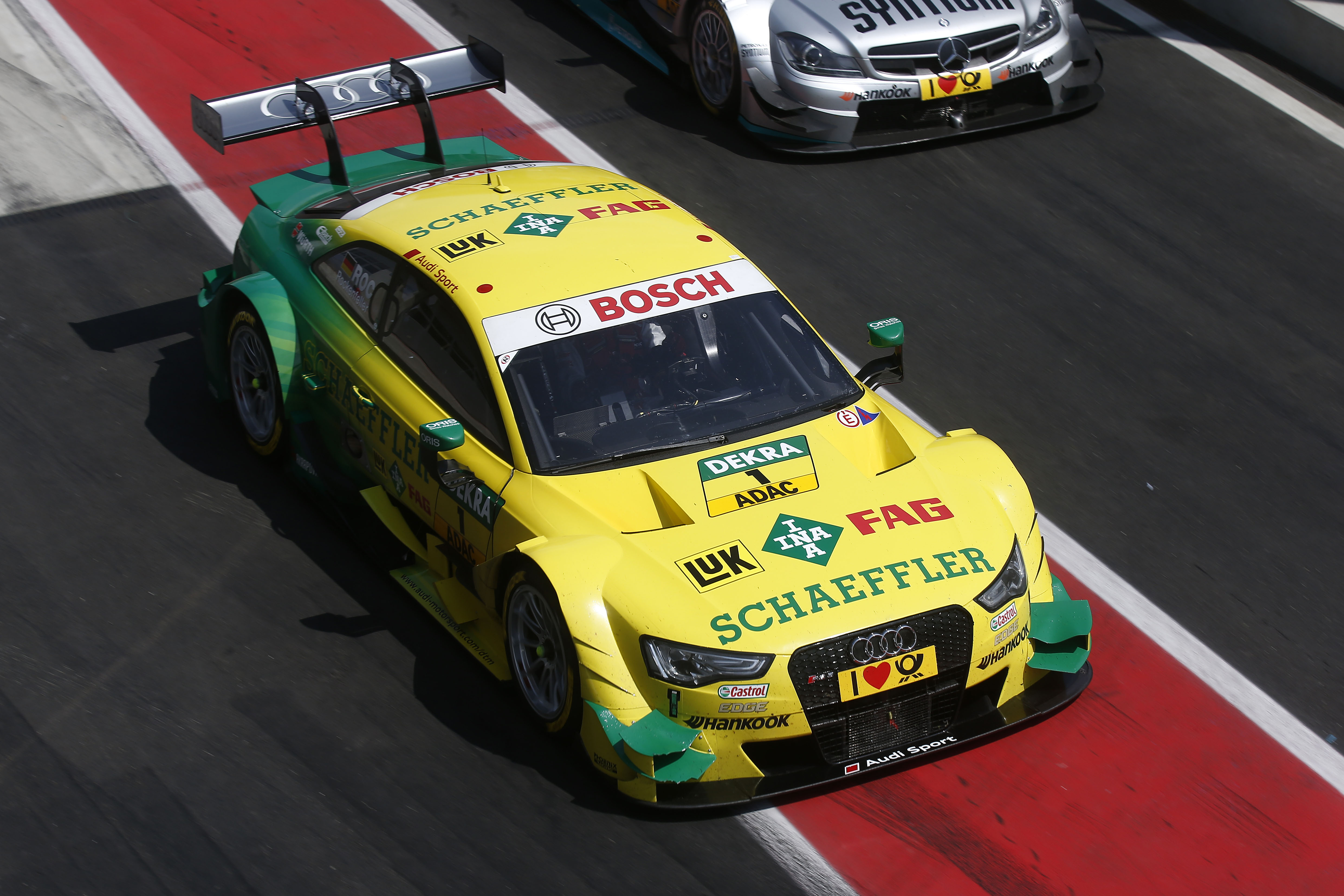 As expected: The Red Bull Ring at Spielberg (Austria) guarantees particularly spectacular DTM races. 47,500 spectators (throughout the weekend) saw gripping duels, strange incidents and, in spite of a difficult starting base, four Audi RS 5 DTM cars in the top eight.

Following the first half of a season that was less than perfect for him, Timo Scheider had a reason to cheer for the first time this year. The two-time DTM Champion had started on the softer option tires and within just a few laps worked his way forward from grid position 14 to join the pack at the front. In the AUTO TEST Audi RS 5 DTM of Audi Sport Team Phoenix, after 47 laps, he crossed the finish line as the best Audi in fifth place – trailing the winner by only 6.666 seconds. 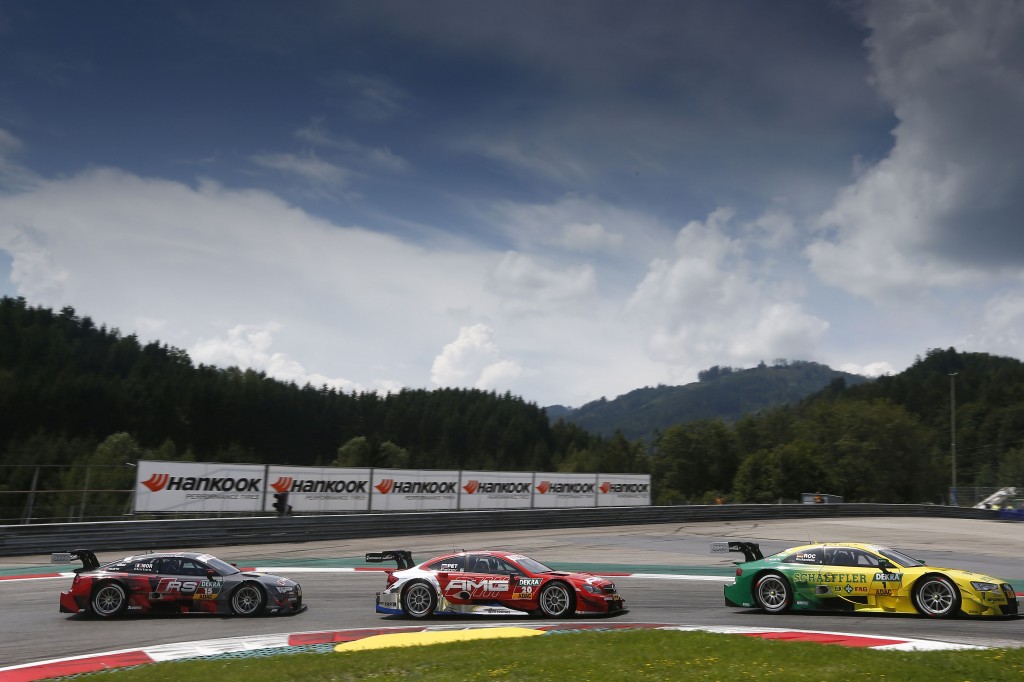 “Advancing from 14th place to fifth in the race is a great feeling for me and the squad,” said the two-time DTM Champion. “We had enough trouble and problems in the first five races. I hope that we’ll be able to turn this around now and to have fortune on our side in the second half of the season.”

Adrien Tambay (Playboy Audi RS 5 DTM) and Mattias Ekström (Red Bull Audi RS 5 DTM, both Audi Sport Team Abt Sportsline) treated the Austrian crowd to impressive recoveries as well. Tambay, like Scheider, had started on option tires and from position 20 on the grid advanced to sixth place. Ekström had started the race on harder standard tires and was ultimately the best driver using this strategy. The Swede made up ground from grid position 15 to seventh place and thus maintained his second place in the overall DTM standings. 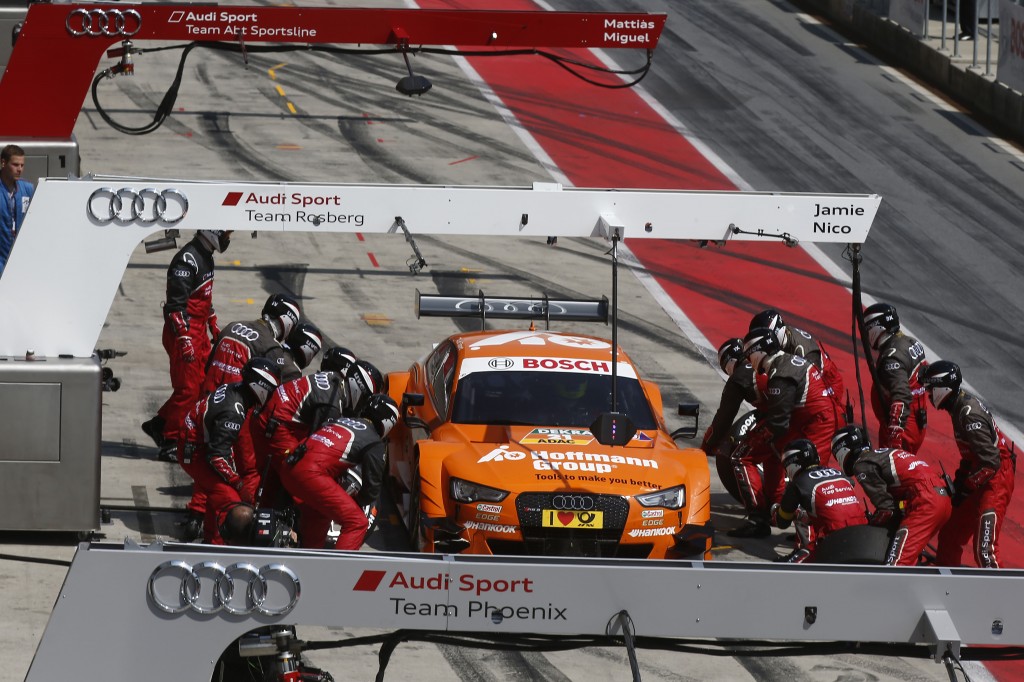 Jamie Green in the Hoffmann Group Audi RS 5 DTM of Audi Sport Team Rosberg was the tragic hero of the day. The Briton had been the only driver to make it into the top ten in qualifying and was in contention in the group of front runners from the outset. Up to the race’s midpoint, he was running in front of the subsequent winner Marco Wittmann. However, due to a communications problem with his pit crew Green switched from option to standard tires one lap too late. As a result, the Audi driver, while leading the race, was forced to pit for a drive-through penalty and in the end had to settle for eighth place.

In eleventh place, Miguel Molina in the Audi Sport Audi RS 5 DTM missed scoring a point by only 0.410 seconds. Title defender Mike Rockenfeller in the Schaeffler Audi RS 5 DTM dropped to the back of the field in the early stage. After switching to option tires, he was the quickest man in the field, advanced to 13th place and with 1m 25.266s (182.647 km/h) set a new DTM track record. 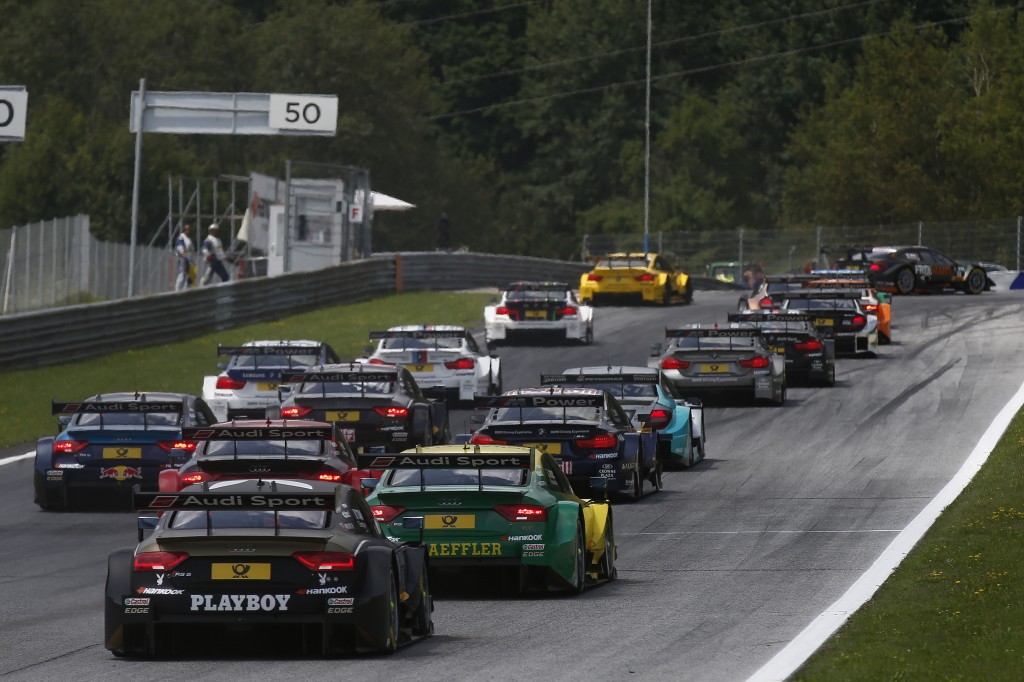 “Following yesterday’s qualifying, we couldn’t necessarily expect to bring four cars into the points,” said Dieter Gass, Head of DTM at Audi Sport, summing up the race. “Today, the performance was right. Mike Rockenfeller drove the fastest race lap, Jamie Green battled for the podium, and Timo Scheider, Adrien Tambay and Mattias Ekström advanced from positions at the far rear of the field to finish in the top seven. It’s a shame that Jamie lost the chance of a possible podium due to a communications error with his pit crew. As a result, it was easy for BMW to bring Marco Wittmann to the front and to provide him with a major advantage in the championship. In two weeks from now, at the Nürburgring, we’ve got to regain our old strength in qualifying.” 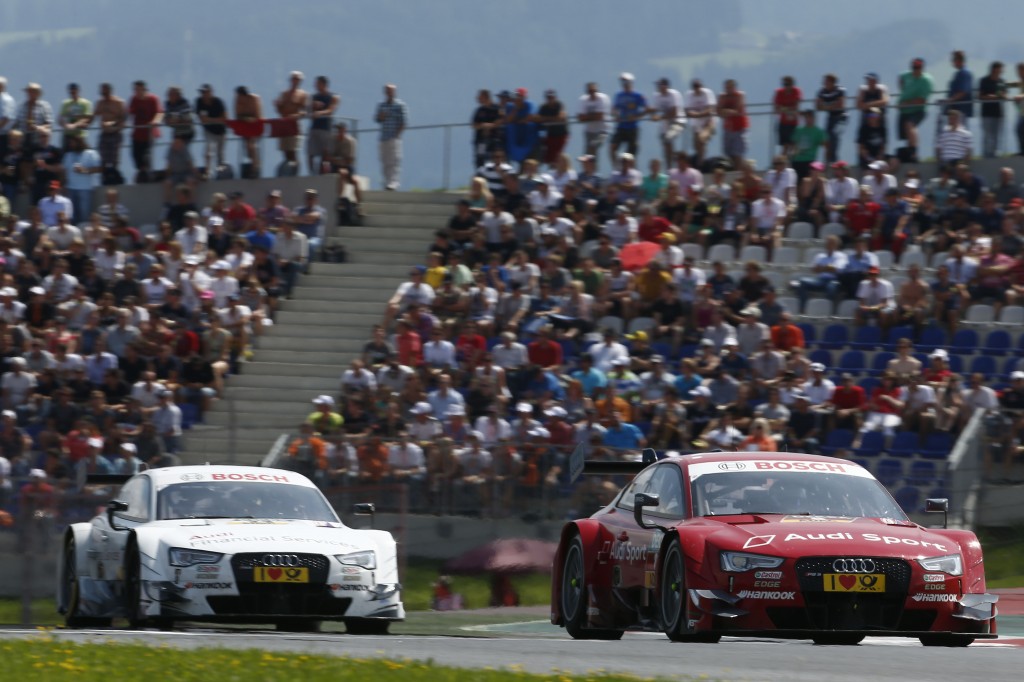 Dr. Wolfgang Ullrich (Head of Audi Motorsport): “It’s great that this year even more spectators traveled to the Red Bull Ring than last year. That speaks for the popularity of the DTM in Austria. I think that no-one regretted having attended this event because the fans got to see a turbulent DTM race. Our drivers, too, contributed their fair share to this and, in view of yesterday’s qualifying session, four Audi cars in the top eight are a decent result.”

Dieter Gass (Leiter DTM): “At first glance, the result looks like damage containment. If, following the qualifying result, anybody had told us yesterday that we’d have four Audi cars in the points today we’d have been relatively pleased. But in Jamie Green’s case, a lot more would definitely have been possible. There was a communications problem between him and his team and he drove one lap too many on option tires. As a result, Jamie deprived himself of the chance to battle for the podium. He definitely had the potential to do so.”

Timo Scheider (AUTO TEST Audi RS 5 DTM), 5th place
Tires: option/standard
“Following a difficult Saturday, I at least had a positive effect – that I managed to advance with the same time as Gary Paffett: I took that as a stroke of luck. Advancing from 14th place to fifth in the race is a great feeling for me and the squad. We had enough trouble and problems in the first five races. I hope that we’ll be able to turn this around now and to have fortune on our side in the second half of the season.”

Adrien Tambay (Playboy Audi RS 5 DTM), 6th place
Tires: option/standard
“This was one of my best races. I hadn’t expected much from grid position 20, not even by starting on option tires. It was a tough race; my car was very good and really fast. We made no mistakes and overtook a few cars. Our pit stop was superb too. Many thanks from me to the whole team because we extracted a good result from a difficult situation.”

Jamie Green (Hoffmann Group Audi RS 5 DTM), 8th place
Tires: option/standard
“It was very disappointing to have received a drive-through penalty, which costs about 16 seconds here. That threw me out of the battle for a top position. I still finished in eighth place in the end; it’s good to have still scored points. I battled for victory, ran on option tires one lap too many – I paid the price for it.”

Miguel Molina (Audi Sport Audi RS 5 DTM), 11th place
Tires: standard/option
“I think we drove a good race. But starting the race on option tires would definitely have been the better choice. I was able to overtake a few cars in the beginning – that was the most important thing. Now we have to continue to work hard and understand what happened yesterday in qualifying. If we do, then things will be going better again in the next race at the Nürburgring. In eleventh place, we just barely missed scoring points here. But as I said, we need to continue to work hard.”

Mike Rockenfeller (Schaeffler Audi RS 5 DTM), 13th place
Tires: standard/option
“A very frustrating weekend. It already started in qualifying, where I could have squeezed out more. Then you try to gamble a little with the strategy. We started on standard tires, hoping that the safety car would be deployed, but it wasn’t. In the race, I lost a lot of time with Félix da Costa, who slowed everybody and pushed me onto the grass. I didn’t think that was very clever on his part. In the end, I had a good pace but that doesn’t help after having lost a lot in the beginning. We’ve got to make sure that we’ll manage a good qualifying session again at the Nürburgring.”

Edoardo Mortara (Audi Sport Audi RS 5 DTM), 16th place
Tires: standard/option
“It was a difficult race. I’m disappointed because I’d been confident especially before this race weekend. We were too slow during the whole weekend. Plus, there were some special decisions by the stewards of the meeting …”

Nico Müller (Audi Financial Services RS 5 DTM), 19th place
Tires: option/standard
“Actually, the strategy was really good. The pace was there on both types of tires. The only problem was the start. I wasn’t so optimistic in that respect because we had a problem with the clutch – that immediately caused me to lose a few places. But afterwards, I advanced really well. Until I received a drive-through penalty for allegedly having driven too fast under yellow. Although I can see absolutely no reason for this: I completely lifted. But because a lap before I’d overtaken two cars in this sector, I apparently wasn’t half a second slower under yellow. Following the penalty, my race was practically over. Whether or not the penalty makes any sense like this is anyone’s guess. Today, points would have been possible. In the end, I finished where I started: I’m disappointed!”

Hans-Jürgen Abt (Team Director Audi Sport Team Abt Sportsline): “It was a difficult race. The starting base was bad. We weren’t able to make up ground on our option tires anymore and are still pleased to have finished in the top ten with two cars. We need to do some analysis now and work on having a better pace in qualifying in order to improve again in the next races.”

Ernst Moser (Team Director Audi Sport Team Phoenix): “Bringing both cars into fifth and 13th place from grid positions 14 and 17 wasn’t so bad. We tried both strategies: starting on option tires and on standard tires. In the end, starting on option tires proved the right choice when looking at where Timo (Scheider) finished. In ‘Rocky’s’ (Mike Rockenfeller) case, things went wrong in the beginning, we lost so many places and time. It was impossible to recover that at the end, although he still drove the fastest race lap. I’m happy for Timo that he broke his duck here and was the best Audi driver.”

Arno Zensen (Team Director Audi Sport Team Rosberg): “It was a shame. We actually had a good starting base with sixth place in qualifying. Nico (Müller) had a problem with the clutch, which didn’t exactly strengthen his self-confidence. He was running far at the rear of the field after the start. Then he received a drive-through penalty. It was difficult for him to drive so slow on option tires under yellow. We’ve got to take another close look again to see if this was justified. Jamie (Green) drove a good race. Shortly before the pit stop, there were some communications problems; that’s why we pitted a lap too late. That’s what he received a drive-through penalty for – that was a real shame.”