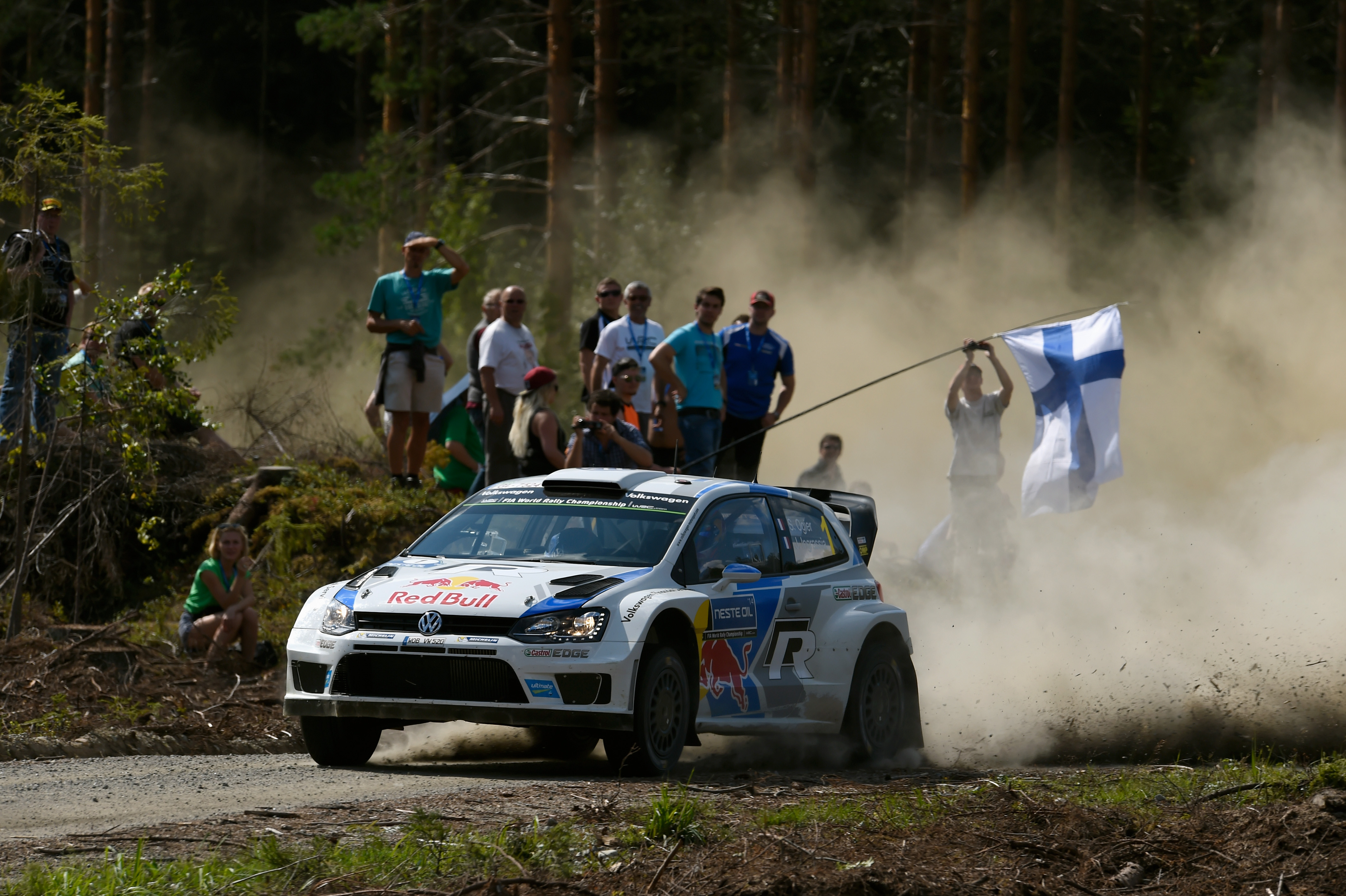 A great day for Jari-Matti Latvala and Miikka Anttila, a great day for Volkswagen, and a great day for Finland: for the first time in four years, a Finnish duo triumphed in their home event in the FIA World Rally Championship (WRC), giving their compatriots reason to celebrate with abandon. Latvala/Anttila won ‘their’ rally in the Polo R WRC in what proved to be a veritable thriller all the way to the finishing line, clinching victory over their teammates Sébastien Ogier/Julien Ingrassia (F/F) by just 3.6 seconds. Volkswagen’s excellent team success in the toughest rally of the year was rounded off by Andreas Mikkelsen/Ola Fløene (N/N) finishing in fourth place overall. Volkswagen has therefore equalled its best team result to date in the WRC, which it set at Rally Argentina in May. The rally known as ‘Formula 1 in the forest’ marks the twelfth consecutive rally win for the Wolfsburg-based team, and is also its eighth win in the current season. Ahead of Rally Germany, Volkswagen therefore is poised to clinch all three WRC championship titles – for the manufacturer, the driver and the co-driver.

“It’s been a fantastic weekend at Rally Finland,” said Dr Heinz-Jakob Neußer, Volkswagen Board Member for Technical Development, who was in Finland to support the Volkswagen team. “Both Jari-Matti Latvala and Sébastien Ogier dominated 25 of the 26 special stages and the final day of the rally couldn’t have been more exciting. There was no knowing who would actually win the rally until they finally crossed the line. The Power Stage once again demonstrated what the team and the Polo R WRC are capable of. We are very happy with the result in Finland and congratulate Jari-Matti Latvala and Miikka Anttila on this huge success in front of a home crowd.” 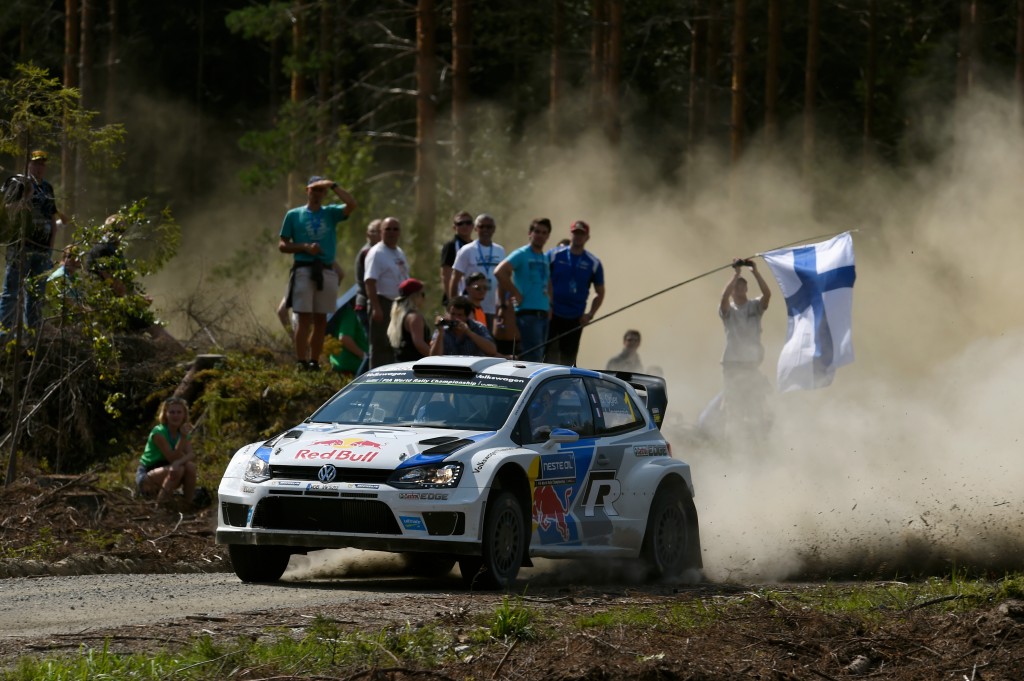 Recipe for success: good self-confidence and a healthy dose of ‘sisu’
The Finnish word ‘sisu’ is the most accurate way to describe the key to Jari-Matti Latvala’s success in his home event. ‘Sisu’ is said to be untranslatable, but can be loosely translated as power, stamina or tenacity, and also intransigence or fighting spirit. And Jari-Matti Latvala demonstrated all of these during Rally Finland. On the second day of the rally, Latvala, who is second in the championship, dominated the proceedings in the morning, but had something of a setback in the afternoon. Having hit a large pothole during the 20thspecial stage, a damaged brake line left him with no braking power on the front right-hand wheel, which caused him to lose around 27 seconds of his lead. Latvala therefore tackled the final three special stages on Sunday with a very slim lead of just 3.4 seconds, and demonstrated not only his driving skills, but also his mental strength.

Since the start of the 2014 season, Jari-Matti Latvala has also been drawing on the support of mental trainer Christoph Treier. Latvala was therefore relaxed during the special stages in his home event, in spite of the huge public expectations and his extremely high motivation. And this resulted in success, with Latvala/Anttila securing 14 of the 26 possible fastest times in the rally.

Prestige duel to the very last metre: Latvala vs. Ogier
Rally Finland, which is considered to be the mother of all WRC rallies, was very much all about Jari-Matti Latvala/Miikka Anttila and their Volkswagen teammates Sébastien Ogier/Julien Ingrassia this year, with 25 of the 26 possible best times being scored by one or the other of the two Volkswagen duos. The only rivals who were able to keep pace were Kris Meeke/Paul Nagle (GB/IRL, Citroën), who picked up one fastest time and finished in third place overall. The Latvala vs. Ogier duel narrowed to a difference of 3.7 seconds ahead of the final Power Stage, and was then reduced further to 3.6 seconds at the finishing line.

On multiple occasions during their high-octane duel, Latvala and Ogier hit a top speed of 200 kilometres per hour, at which point their speed was kept in check by the speed limiters. With countless jumps, some as far as 60 metres, and also plenty of blind hill crests and corners, the WRC drivers had to deliver maximum precision. And for the 38th time in the history of the WRC, a rally was won with a margin of less than ten seconds.

Great success, part two: match point for Volkswagen ahead of home event in Germany
Thanks to its one-two victory in Finland, Volkswagen has extended its lead in the manufacturers’ standings in the FIA World Rally Championship (WRC) to 175 points over their closest rival Citroën. This therefore gives Volkswagen its first match point ahead of the brand’s own home event, Rally Germany: if it succeeds in defending a 172-point lead, the manufacturers’ championship title will go to Wolfsburg for the second year in a row. The German rally could also be a decider in favour of Volkswagen in the drivers’ standings too: following Rally Finland, Sébastien Ogier and Julien Ingrassia have a lead of 121 points over the best non-Volkswagen duo, Mads Østberg/Jonas Andersson (N/S, Citroën). If they still have a lead of 112 points after Rally Germany, it will definitely be a Volkswagen duo who will celebrate victory in the drivers’ and co-drivers’ standings. Ogier/Ingrassia are currently in the lead on 187 points, followed by their teammates Latvala/Anttila (143 points) and Mikkelsen (95 points).