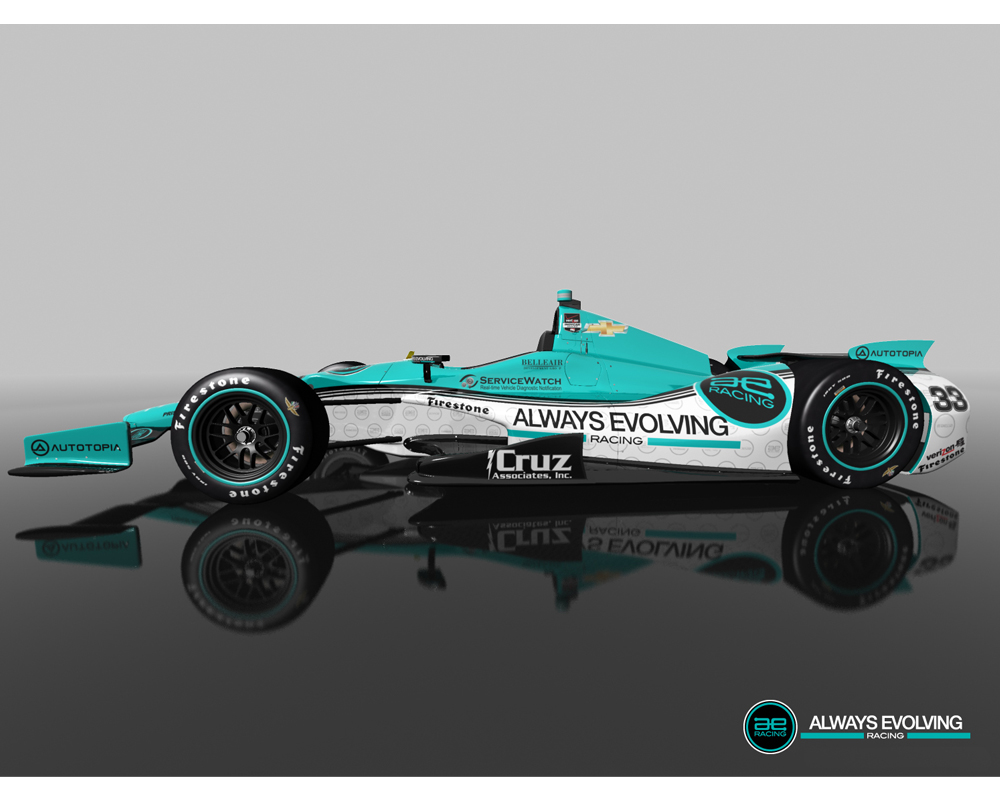 Always Evolving Racing has unveiled the livery for its first ever Indianapolis 500 competition as a title sponsor. The team is partnering with KV Racing Technology to race the Chevrolet/Dallara/Firestone machine.

The primary colors of the Indy car are the team’s vibrant teal and white with black accents, consistent with Always Evolving’s cars in multiple racing classes. Teal is the dominant color swath and the “AE” brand logo is prominently displayed on the hood, sides and spoiler of the car. “Teal and white scheme has been our signature from the start,” said Erik Davis, CEO of Always Evolving. “To see it on an Indy car in the world’s greatest racing event is exciting for our organization and fans. We anticipate the car will perform as well as it looks.”

A unique detail of the livery has significant meaning to the Always Evolving team. In the white splash along the sides of the car are faint, gradient “AE” logos with the name Roger Rodas highlighted. This is the team’s special tribute to its co-founder who died tragically with actor/producer Paul Walker in a car accident in late 2013. The team has established “Racing in Honor” as their internal mission for the 2014 season in his memory.

“The tribute logos aren’t really visible on television or in the stands,” explains Davis. “It’s more about remembering our friends and celebrating their passion for this team.”

As the race’s final entry, the car will fly No. 33 in the race at the suggestion of driver James Davison. “I personally chose No. 33 for the car, knowing how important it was for the event to have a full field.” Davison explains. I thought it was an appropriate salute and something I will always be able to look back at and know why I was No. 33. But I certainly don’t plan to qualify or finish 33rd.”

“It’s been my childhood dream to drive in the Indy 500 and I have had to work very hard and persevere and be very patient to get this opportunity,” said Davison. “Finally, it’s arrived and I have a fantastic opportunity with the reigning Indianapolis 500 champion team. I feel I have the best of chances to do well.

ABOUT JAMES DAVISON:
Davison, 27 and a native of Melbourne, Australia, hails from a true racing legacy. His grandfather, Lex Davison, won the Australian Grand Prix four times and his father, Jon Davison, was a driver and long-time racing promoter. James came up through the Australian open-wheel ranks before moving to the United States and competing in Formula BMW USA, Star Mazda and Champ Car Atlantic. He raced two seasons in Indy Lights, winning two races and finishing second in the 2009 championship. Davison has spent most of the past four seasons racing sports cars, but made his first Verizon IndyCar Series starts in 2013 at Mid-Ohio and Sonoma. He is already a race winner at Indianapolis Motor Speedway, having won the Formula BMW USA event run on the road course in conjunction with the 2005 Formula One U.S. Grand Prix.

Conceived nearly five years ago in Los Angeles, Always Evolving began as a car-culture brand concept encompassing professional motorsports, authentic automotive lifestyle and automotive collection operations. Roger Rodas and Erik Davis built the racing team in 2013 as a platform to combine their passion for competing and their desire to support charitable organizations. Following Rodas’ tragic passing in November 2013, owner/driver Davis and the team established “Racing in Honor” as their internal mission for the 2014 season in Rodas’ memory. For more information about Always Evolving Racing, visit: AlwaysEvolving.com