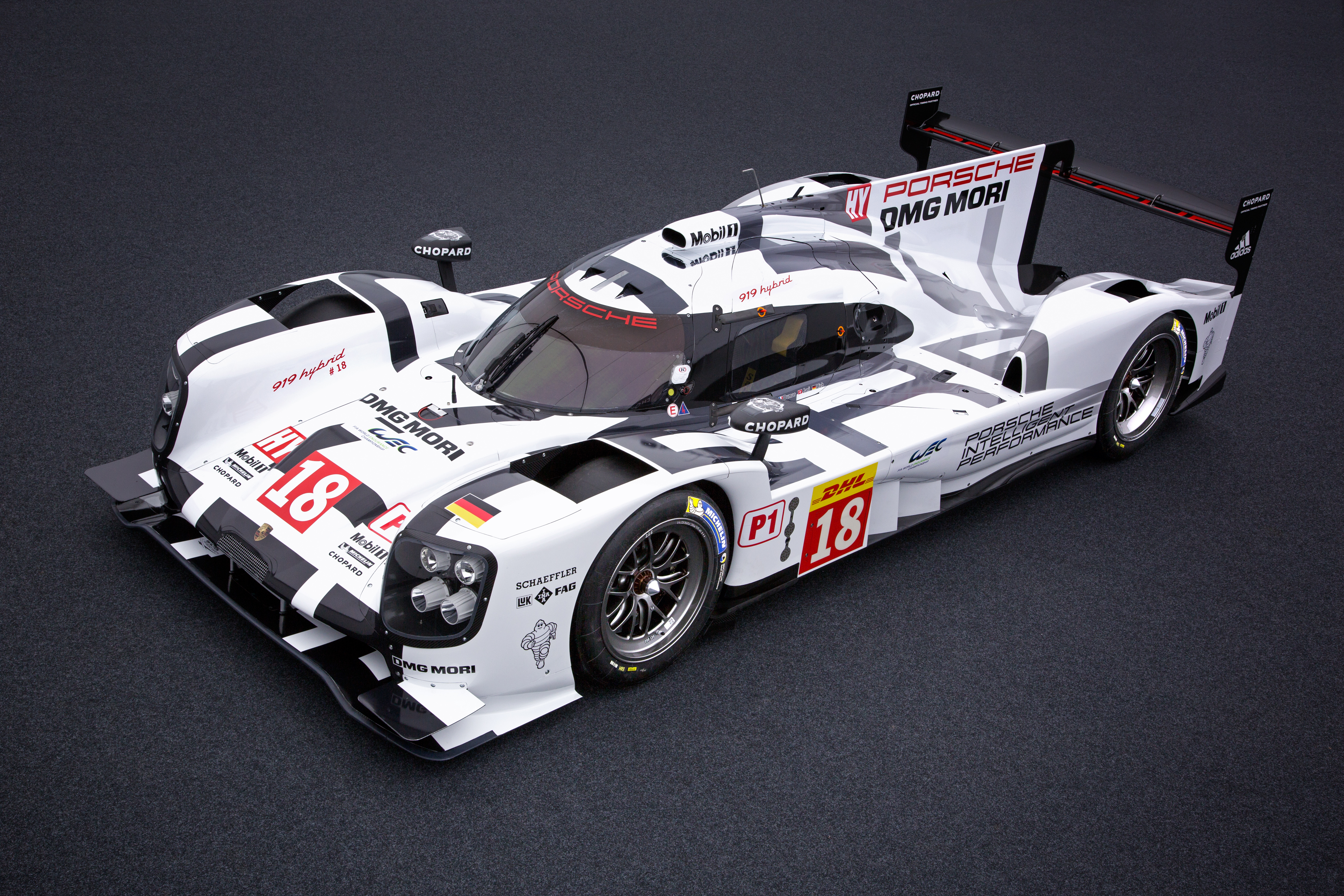 Late last week at the Paul Ricard Circuit in France, Porsche unveiled the second generation of its Le Mans Prototype 919 Hybrid race car as a technical evolution in a three-color concept. Porsche also confirmed it will switch to the highest of the four energy categories in the LMP1 class. The performance of the energy recovery system was able to be increased by around one-third as compared to 2014. This means the 919 Hybrid is competitive to race in the 8-megajoule category. 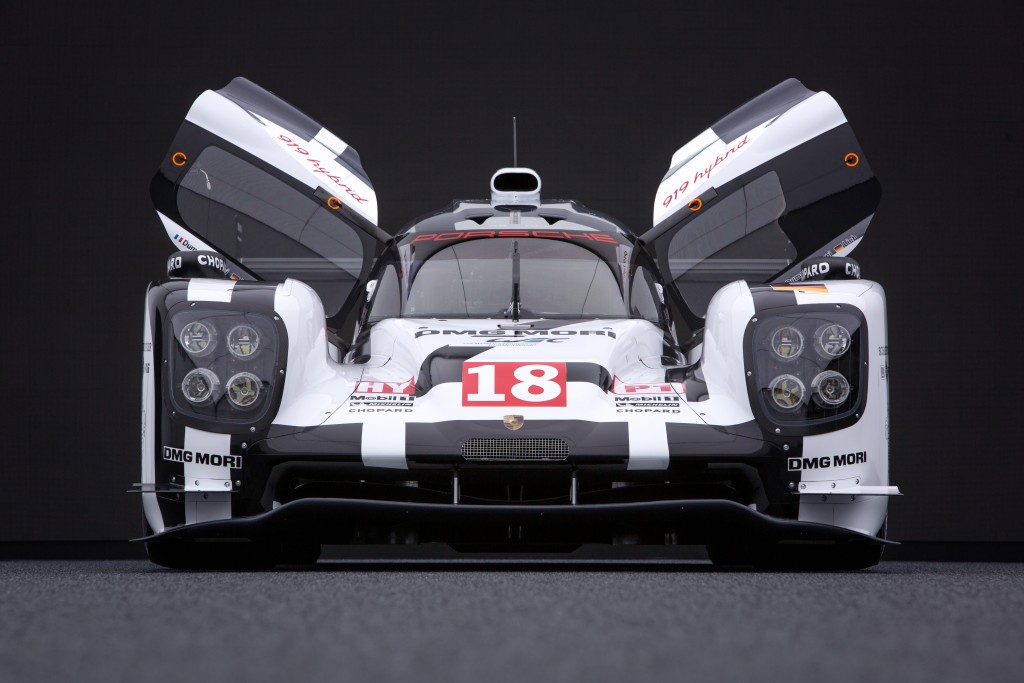 The Porsche team will use two of its extensively further developed technology platforms in all eight races of the FIA World Endurance Championship (WEC). The cars will be white and will also carry the “Porsche Intelligent Performance” motto on their bodywork. This also applies to the team’s third 919 Hybrid, which will race at Spa-Francorchamps on May 2. 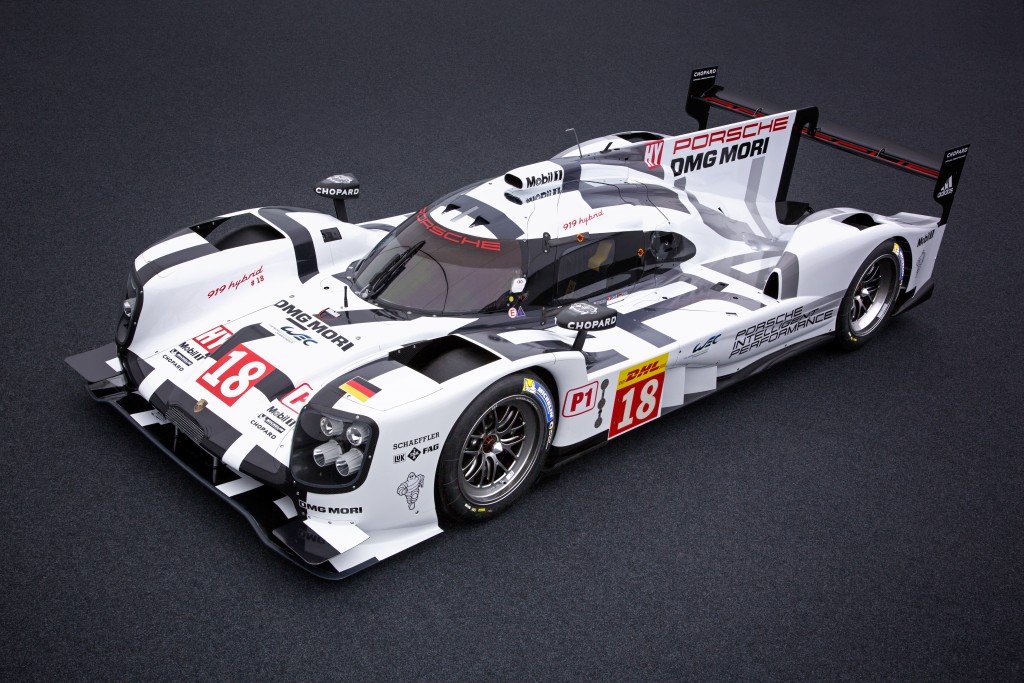 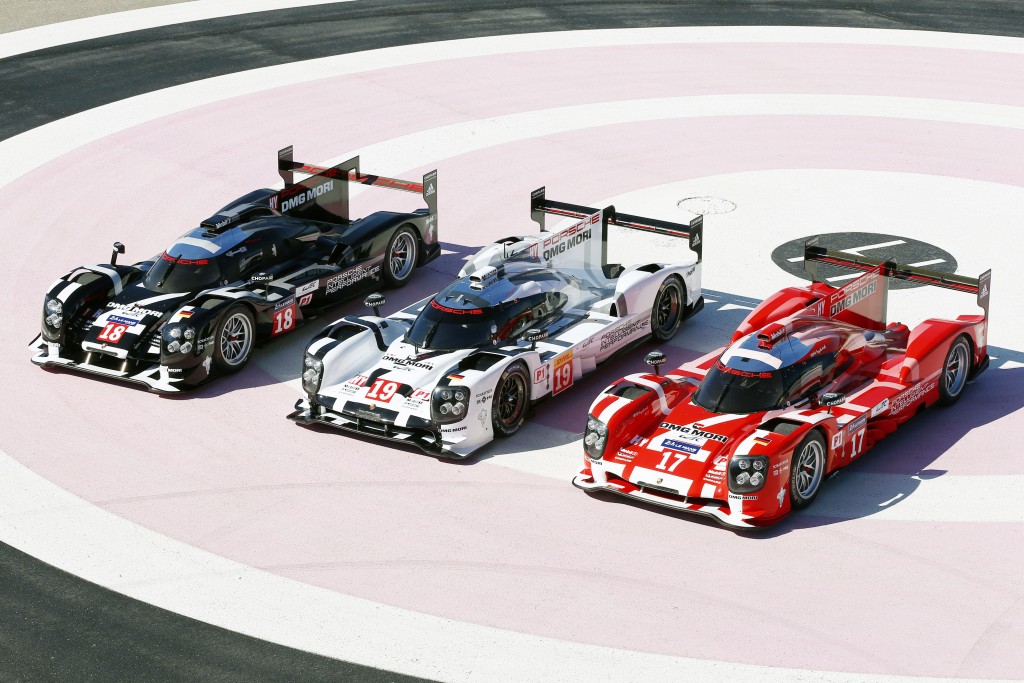 “The LMP1 program at Porsche focuses on extensively networked cooperation between the engineers who work on our innovative drive system concept.” The WEC regulations are designed to ensure that the most efficient car wins. The automotive industry in general must adopt exactly this approach to remain viable. Porsche already offers three plug-in hybrid production sports cars today. “This sets us apart from the competition and we plan to grow even stronger in this segment,” stated Wolfgang Hatz, board member for research and development at Porsche AG. 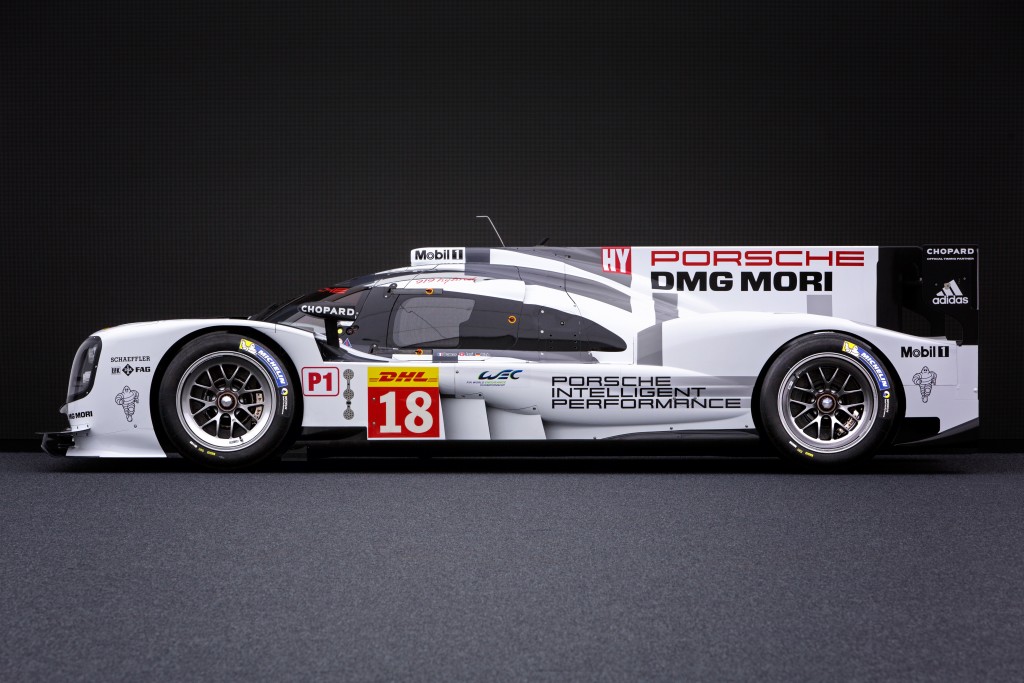 “To this end, we need substantial expertise within the company. The tremendous pressure to perform in the top LMP1 category means our development specialists for production cars learn a lot in a very short time. On the other hand, young engineers receive top-quality training at turbo speed, and this knowledge can later be applied very effectively in series production. Learning from the race track for everyday roads is a tradition at Porsche. Therefore it makes perfect sense to create at least a partial link between our Le Mans prototypes and our motor racing history by means of the colors we use.” 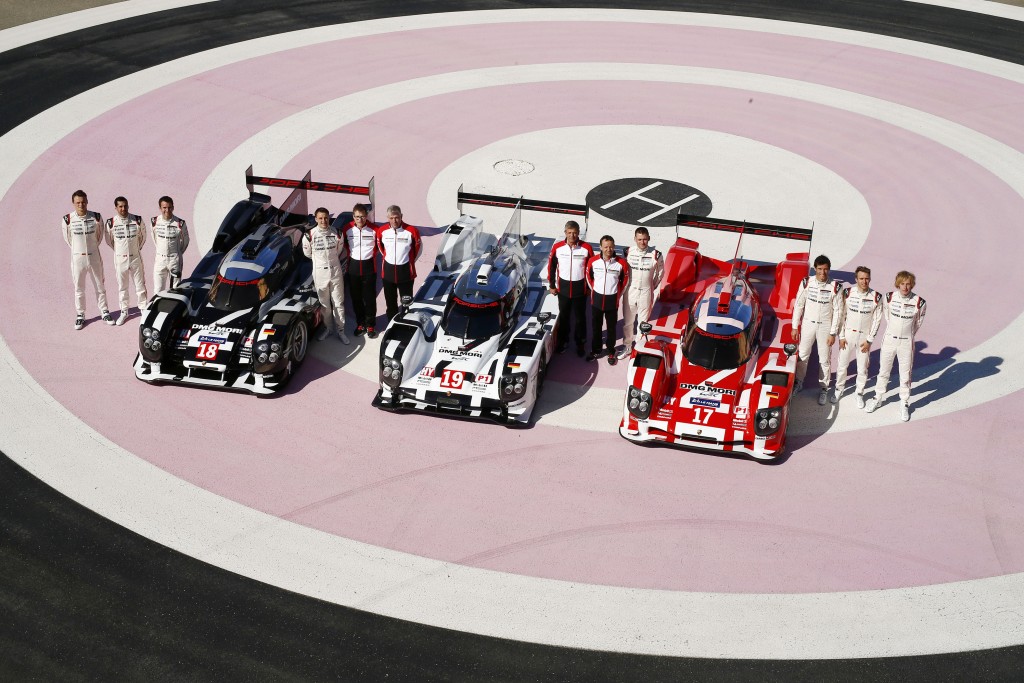 The starting number and color of the red prototype are a tribute to the Porsche that captured the first of what are now a total of 16 overall victories for the brand in Le Mans in 1970. No other brand has claimed so many victories in what is believed to be the world’s most demanding endurance race. The base colour of the Porsche 917 KH (“short-tail”) in “Salzburg Design” that won the race 45 years ago on June 14, 1970 was also red. The winning drivers then were Hans Herrmann from Germany, who is now 87, and Richard Attwood from the UK, who is 74 today. In 2015, at the 83rd running of the classic race at Le Mans, the red prototype with starting number 17 will be driven by Timo Bernhard, Brendon Hartley and Mark Webber. 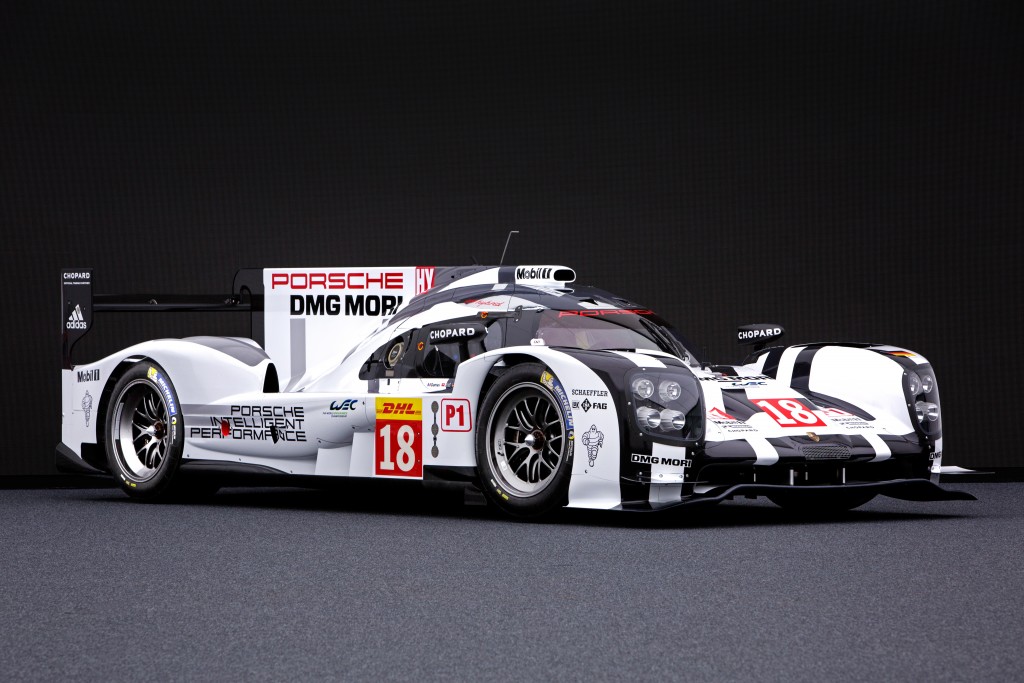 The black LMP1 with starting number 18 is a symbol of the close technical kinship between the Porsche 919 Hybrid racing car and the Porsche 918 Spyder super sports car, which is also equipped with a hybrid drive. It was also a black 918 that on September 4, 2013 set a new record for a street-legal production sports car by completing a lap of more than 20 kilometres on the North Loop of the Nürburgring in six minutes and 57 seconds. The record-setting driver here was Marc Lieb, 34, from Germany. Lieb will also drive the black 919 in Le Mans this year – together with Romain Dumas, and Neel Jani. 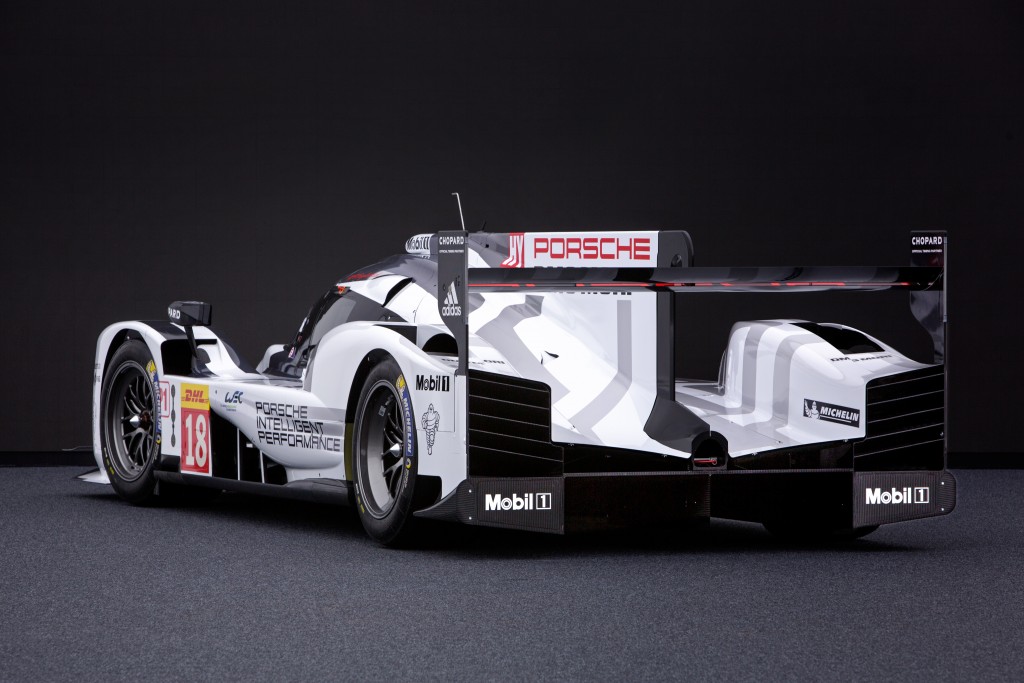 The team’s third car – the white 919 Hybrid with starting number 19 – will be competing in Le Mans in the color Porsche chose for its return to top-notch racing after a 16-year absence. White, which is a traditional color for racing cars from Germany, will also be used with the two Porsche 911 RSR factory cars that will race in the GTE Pro Class. In Le Mans, the third 919 will be driven by Earl Bamber, F1 driver Nico Hülkenberg, and Nick Tandy. 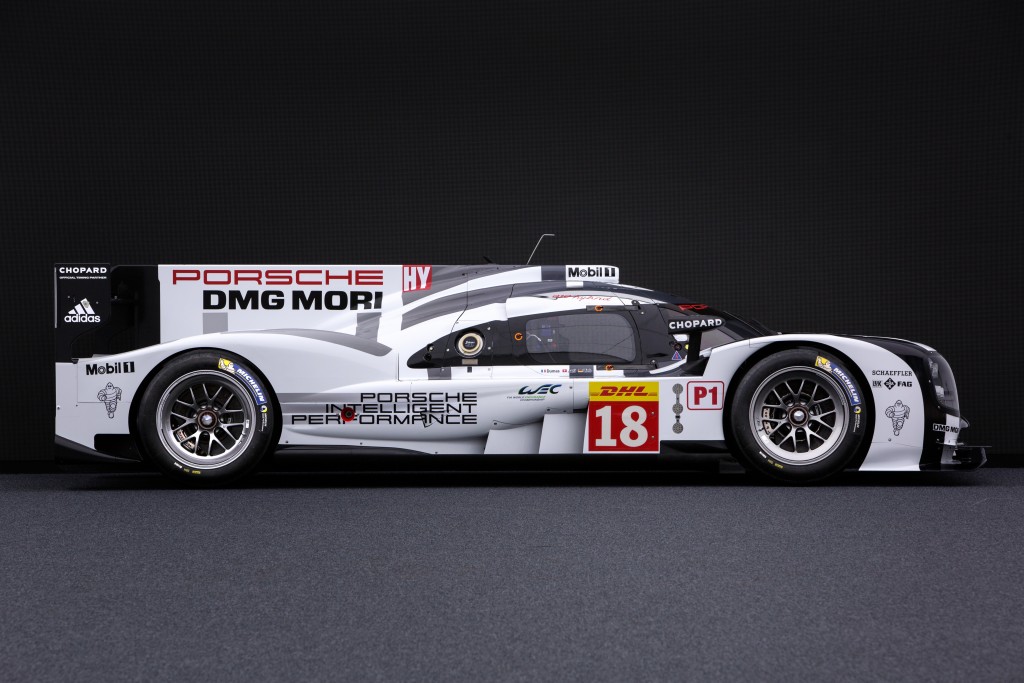 Although the basic concept of the Class 1 Le Mans Prototype (LMP1) was retained in the second generation, virtually every component was refined. The ambitious goals for the next evolutionary stage were to make the vehicle more efficient, more rigid, easier to handle, lighter and yet more robust.

The 919 is equipped with a 2-litre V4 turbocharged petrol engine with an output of more than 500 hp, which powers the rear axle, and an electric motor with over 400 hp that drives the front wheels and gets its electricity from two energy-recovery systems. A liquid-cooled lithium-ion battery temporarily stores converted braking energy from the front axle as well as converted exhaust-gas energy. The reworked drive system is more powerful and more efficient than before. The Porsche 919 Hybrid was homologated for the top energy-recovery category (8 megajoules for one lap in Le Mans) for the first time in 2015. 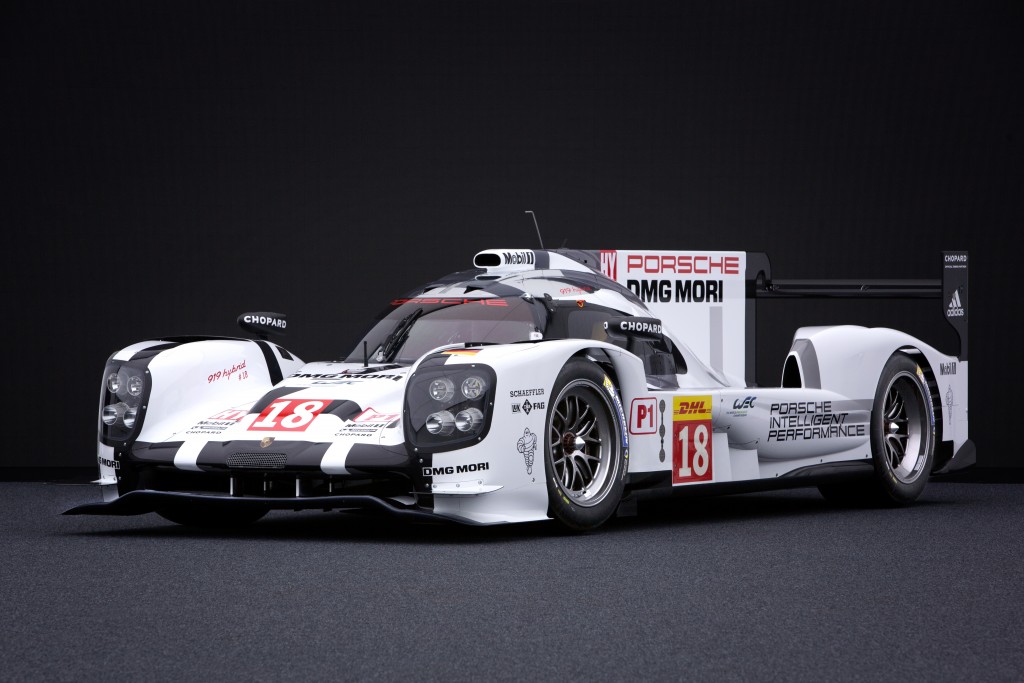 The vehicle’s lower weight and improved overall rigidity, as well as optimizations made to the suspension and aerodynamics, improved the handling of the endurance racing car. Despite the significant weight reductions, the engineers were still able to make certain key components more robust.