It was a strong start to the season for the Olsbergs MSE Ford team this weekend with both team cars proving they are top performers with winning potential in the 2014 championship.

Rookie Supercars driver Joni Wiman was an immediate threat in his first race in the Red Bull/Bluebeam Ford Fiesta ST, showing this weekend that he has what it takes to compete in the top class of competition. He confidently won two of his three heat races to advance directly to the main race. 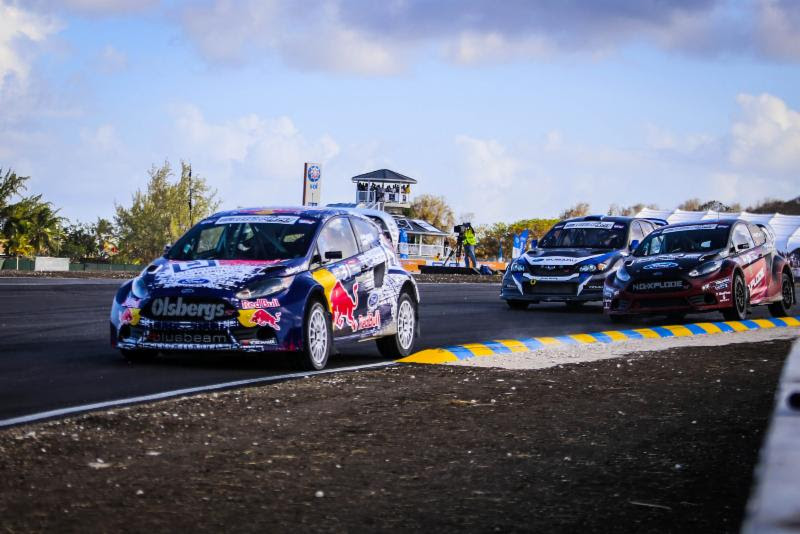 Patrik Sandell also established what his Kobalt Tools Olsbergs MSE Ford Fiesta could do, earning strong heat results to bypass the LCQ and advance directly to the Final.

Lined up in the first and second rows of the Final race, both drivers looked good for a top result.

The 20-year-old Wiman, who swept the GRC Lites series last year and competed in the Supercars category for the first time this weekend, got a solid start in the Final and had just made a clean pass on Ken Block for the lead when the latter driver crashed prompting a restart.

After the restart, Wiman was again in the lead — and holding off ex-Formula One driver Scott Speed — when a miscalculation on the Joker lap knocked him back in the order. Fighting back through traffic on the last lap of the race, Wiman was pushing hard when he and a rival made contact. Although Wiman crossed the finish line in third place, officials issued a post-race penalty for the contact and he scored fifth-place points.

“We accomplished a lot and proved how fast we can be,” said Wiman after the race. “We came so close — I just wish there could have been a podium. It will come next time.” 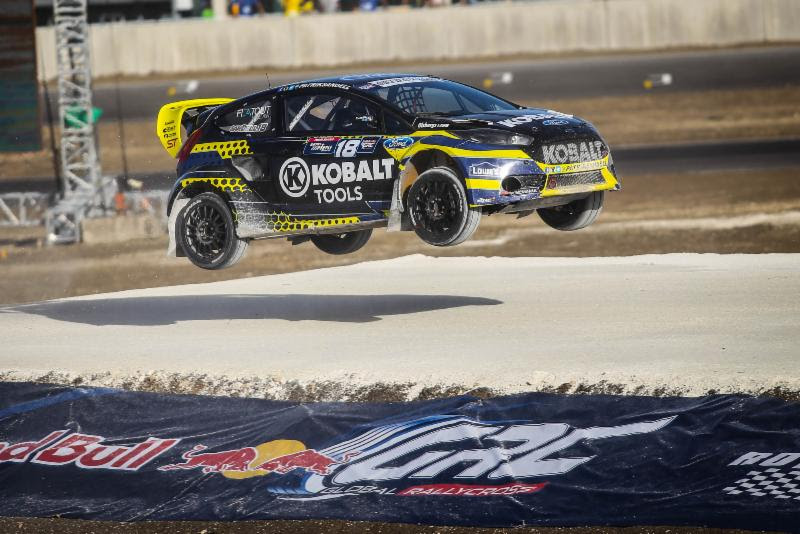 Sandell also fired off the start in the Final and was fighting toward the front of the pack when he was bumped off-line and suffered a flat tire. Although Sandell demonstrated the never-give-up attitude that’s the hallmark of a successful rally driver and continued on for several laps, was not able to return to contention and he pulled off the course to preserve his vehicle. He scored eighth-place points.

“We worked well together as a team and the Kobalt Tools Olsbergs MSE Ford Fiesta ST is very fast,” said Sandell. “As a driver with a background in rally racing competing on a road course here in Barbados, this has been a learning weekend. We scored some great points to open the season and I’m looking forward to getting onto some dirt at X Games in three weeks!”

The race, which took place over two days of a packed Top Gear Festival weekend at the Bushy Park Circuit in Barbados, saw thousands of fans on their feet for the Red Bull GRC action. An estimated 20,000 fans were in attendance for the racing action.

Andreas Eriksson, owner of the three-time defending GRC championship team, said the opening round of the series showed the strength of the Olsbergs MSE Ford Fiesta ST rallycross cars. “This was a power track with a very long opening straight, and the team cars performed flawlessly here,” said Eriksson. “There is no question that our drivers have the potential to win in this series and we’re on track for 2014.”

The team will next appear with Olsbergs MSE World RX drivers Andreas Bakkerud and Reinis Nitiss, alongside guest driver Andrew Jordan, in the World RX of Great Britain at the Lydden Hill Race Circuit on May 24 and 25. That race will also see the return of the Olsbergs MSE-built World RX Lites and the international motorsport debut of American Red Bull phenom Mitchell DeJong.

Red Bull Global Rallycross pits small production-based cars against each other in door-to-door racing featuring dirt, asphalt, and table-top jumps. With enhanced engineering and safety features, the cars produce 600 horsepower and can accelerate from 0-60 miles per hour in less than two seconds, and can also withstand 70-foot jumps and other vehicle contact.

OMSE is a Ford Racing technical partner, developing the Ford Fiesta platform for international competition. Together, Ford and OMSE have earned an astonishing 19 X Games medals, including podium sweeps at the world’s leading action sports contest (Los Angeles, 2011; Brazil 2013). The team has also scored every rallycross championship in the United States since the sport debuted in that country in 2010, and its drivers are podium regulars in European competition.

Founded in 2009, the organization represents a partnership between historic Swedish industrial company Olsbergs and rallycross specialists Motor Sport Evolution. In 2013, the company expanded its operations into the United States and now has dual headquarters with operations in both Nynäshamn, Sweden, and Huntington Beach, Calif.

OLSBERGS MSE IS POWERED BY: