Only three years ago, the series that has now grown into the internationally renowned Red Bull Global Rallycross was an operation of much smaller scale. Its debut race, held at Irwindale Event Center in March 2011, featured a radically different driver lineup than the one that graces the series’ purpose-built courses of 2014, but a handful of names remain constant. 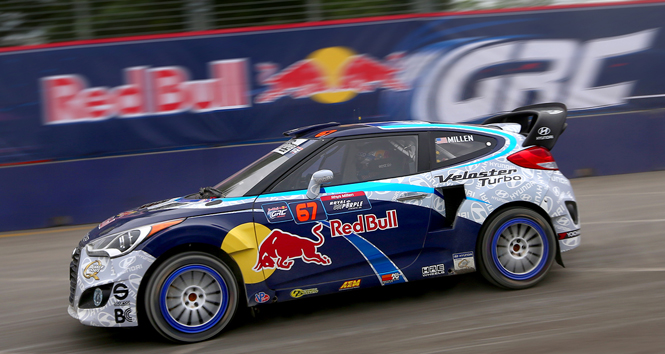 One of those names is Rhys Millen, the New Zealand-born racer whose nickname “Mad Skills” was earned over a lifetime of victories and championships in everything from hill climbs to drifting and numerous high-profile stunt driving gigs. Millen’s Hyundai Veloster Turbo has been an iconic ride in the series from day one, and it took him to two consecutive third place finishes in the first two years of the series.

After scaling back to a limited schedule in 2013, Hyundai returned to Red Bull GRC with its largest rallycross commitment ever, backing both of Millen’s cars for the first time. But with his re-entry into the sport secured, Millen began retooling for the future, adding not only the sport’s first female driver in Emma Gilmour but also becoming the first Supercars team owner to field a GRC Lites team outside of Andreas Eriksson, whose Olsbergs MSE team builds the spec cars.

“For me, it’s always been a vision of my own that it’s not about me,” Millen explained. “It’s about growing a team, and there’s life as a driver and as a team owner. I grew this team from being a privateer, funding it myself and doing one or two races a year many years ago, into performing well and gaining support from manufacturers, into what you see today.”

The team has weathered an up and down start to the season, with the overall results not fully reflecting the competitiveness of the team. Millen has won numerous last chance qualifiers in Red Bull GRC competition, but also took the first heat victory in team history at X Games Austin earlier this month. Meanwhile, Gilmour advanced to the semifinals in Texas, meaning she finished higher than Tanner Foust and Toomas Heikkinen, the only two champions in series history, three-time European champion Sverre Isachsen, and defending GRC Lites champion and top seed Joni Wiman. 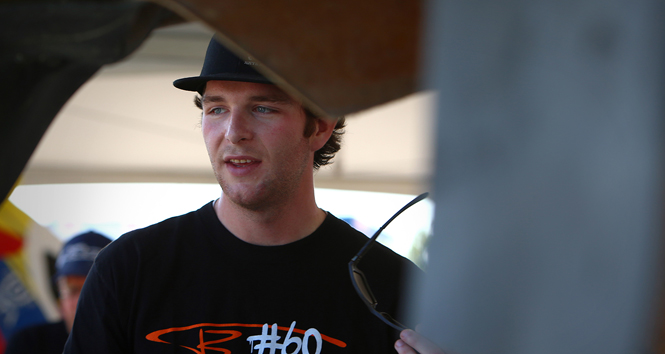 “The most impressive thing about the cars is that we’re not making any more power, and we haven’t made the cars any lighter,” admitted Millen. “We just got the support that was required from Hyundai to start the program earlier than we have in the past. Hyundai is now supporting two cars, not just my car as it had been, so we can go testing and I can drive both cars with two different setups, and actually develop the cars.

“The speed out of the cars has been in setup—suspension settings, spring rates, differential settings, and pressures. That’s really the key—keeping the tires on the ground and keeping the car moving forward to reduce that lap time.” 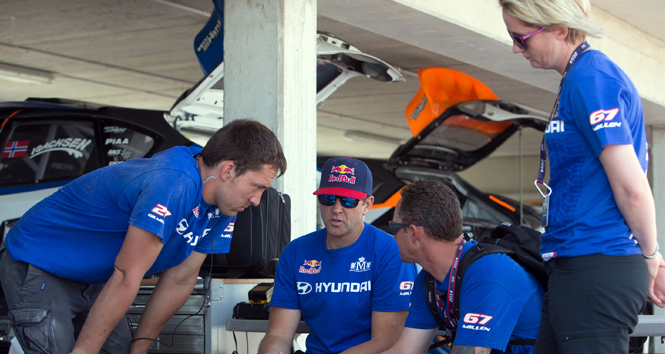 Though GRC Lites features a spec vehicle, new addition Tyler Benson has seen an incredible boost to his confidence since joining Millen’s operation. With mechanics devoted to his vehicle and a slot in the paddock directly next to the two Veloster Turbo Supercars, the New Jersey native is every bit as much a part of the team as Millen or Gilmour when he gets behind the wheel.

“It’s hard to say how much it means to me to have that much personal attention, to constantly have two guys who are dedicated to nothing but my car,” he said. “Anything I feel or think, or they see, gets handled immediately and gets done to the utmost (level). There are no corners cut anywhere—we get things done the way they should be the first time, and that’s that. It makes my job a lot easier.”

A preseason test session saw Benson working directly with Millen in California for multiple days to hone his skills and help make up for a difference in seat time compared to the other drivers returning to GRC Lites from last year. By the end of the test, which saw Benson drive in both directions on a temporary course that Millen had set up, the young driver’s lap times fell by multiple seconds. 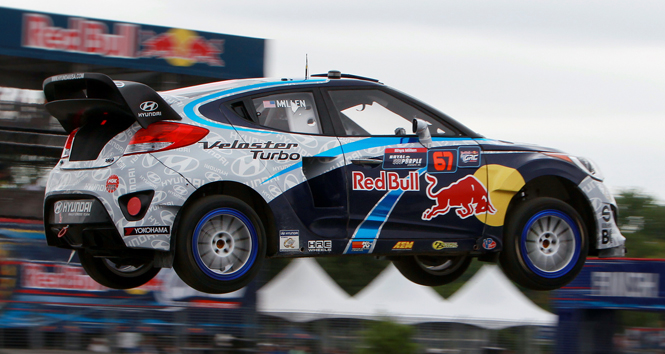 “To be able to work with guys that are so established and have that much knowledge, I just benefit to the moon, like I expected I would. Going out in the first heat (at X Games) and running second, after being more tentative and hanging out in the back of the pack last year, I think the team has proven that we can get it done with the right group of guys, and especially with Rhys’ mentoring.”

With two driver prospects improving every weekend, the future of Rhys Millen Racing is bright enough for its leader to consider the future, and potentially migrating to a role that will see him run the team but no longer drive for it.

“My vision for the team is to step aside one day—when the young ones are beating me—and take that role as just a team owner,” he added. “Right now I wear multiple hats. But it’s in my blood to help people, and I enjoy helping people envision their goals, better themselves, and achieve those goals.

“When the timing’s right, you’ll see a transition of me stepping out of the driver’s seat and focusing on driver development for the continuation of the sponsors that we have.”

Just remember one thing: as long as Millen keeps finishing up front, don’t expect that time to come too soon.