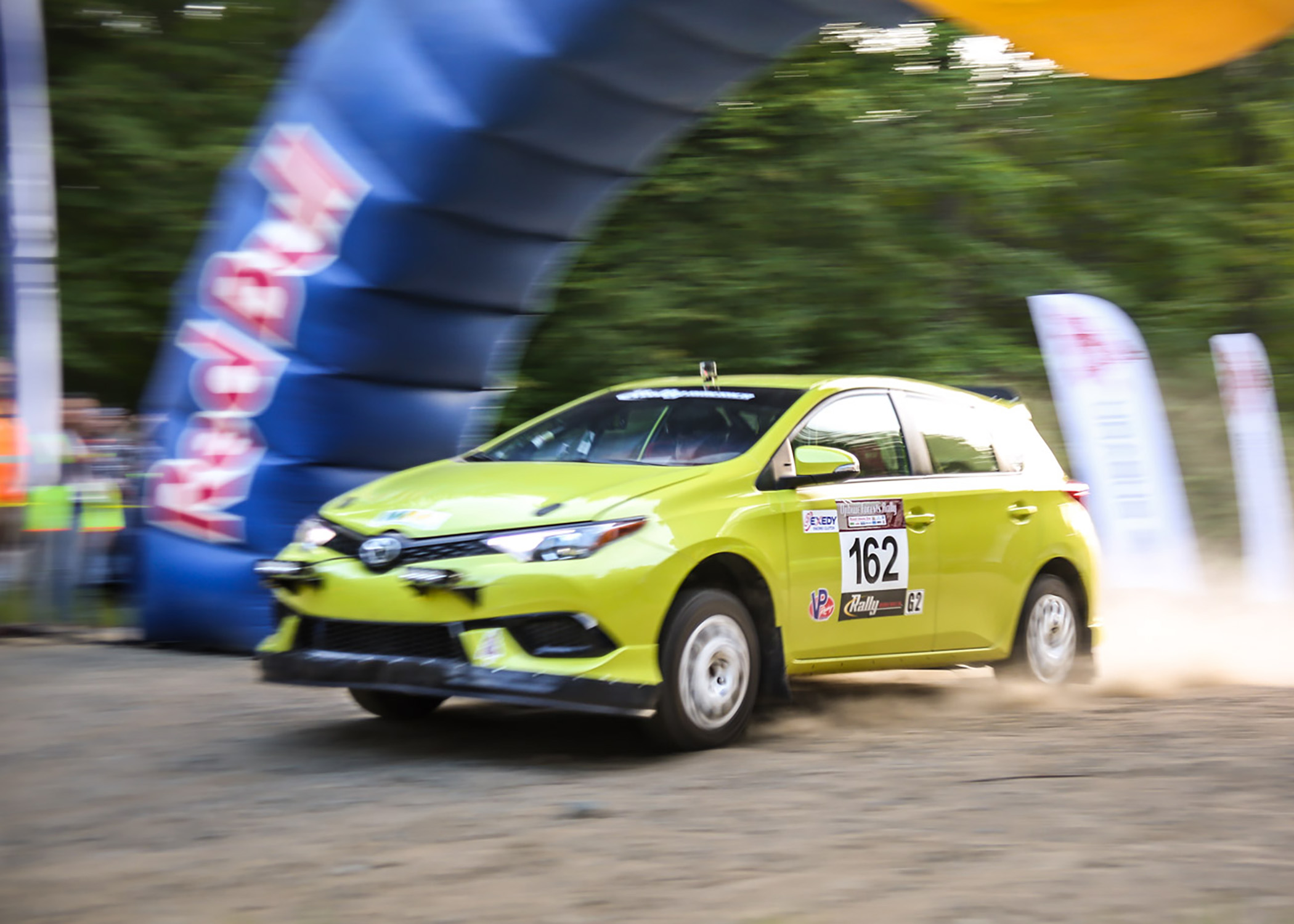 The relatively stock car held together at Ojibwe and they finished 3rd in class, 13th overall in the one regional and 6th in class, 18th in the other. (Regional events are simply the National two day rally broken into a separate event for each day.)

The team is made up entire of Toyota employees and associates(not sure what that means) and they plan to compete at LSPR this October! Say hi to them at Parc Expose and cheer for them during the rally. Its so cool when companies let employees build a race team to learn through.

Here’s the full press release covering all the details.

This was the team’s first appearance at Rally America’s Ojibwe Forests Rally since returning to stage rally in 2014, and only the second race event for the iM.  The team first ran the Spring Green iM at the Susquehannock Trail Performance Rally (STPR) in June, but that race was more of an experiment than a competition.

“STPR was a shake-down for the iM,” said Toyota body design engineer and driver Brian Thurgate. “We ran it completely stock to determine what it would take to get a car designed and engineered for the street to be competitive on the rally stage.”

Crew Chief and Driver/Co-Driver Kyle Steinkamp took the lessons learned from STPR and developed improved suspension components. “The low ground clearance of the iM is great on the street and does what it is engineered to do. But we’re racing at high speed on roads and trails more suited for Tacomas and 4Runners,” said Steinkamp, a Toyota chassis engineer. “We were able to use components from other Toyota models to beef up the suspension and the result was a much better handling rally car.”

Other lessons learned led the team to add plating to the underside of the car. “The iM is a street car, but at times we’re running it on terrain where most people wouldn’t drive their SUVs,” said Driver/Co-Driver Colin  Ravenscroft. “At STPR we had issues with damage to the exhaust and other components from rocks and rough landings after jumps. With the changes we made, we didn’t have any of those issues at Ojibwe.”

The team, made up entirely of full-time Toyota engineers and associates, will wrap up the 2016 Rally America season this October in Houghton, Mich., at the Lake Superior Performance Rally (LSPR), alongside the Toyota Rally RAV4 of Ryan Millen.

About Toyota
Toyota (NYSE:TM), the world’s top automaker and creator of the Prius and the Mirai fuel cell vehicle, is committed to building vehicles for the way people live through our Toyota, Lexus and Scion brands.  Over the past 50 years, we’ve built more than 30 million cars and trucks in North America, where we operate 14 manufacturing plants (10 in the U.S.) and directly employ more than 44,000 people (more than 34,000 in the U.S.).  Our 1,800 North American dealerships (1,500 in the U.S.) sold more than 2.8 million cars and trucks (nearly 2.5 million in the U.S.) in 2015 – and about 80 percent of all Toyota vehicles sold over the past 20 years are still on the road today.