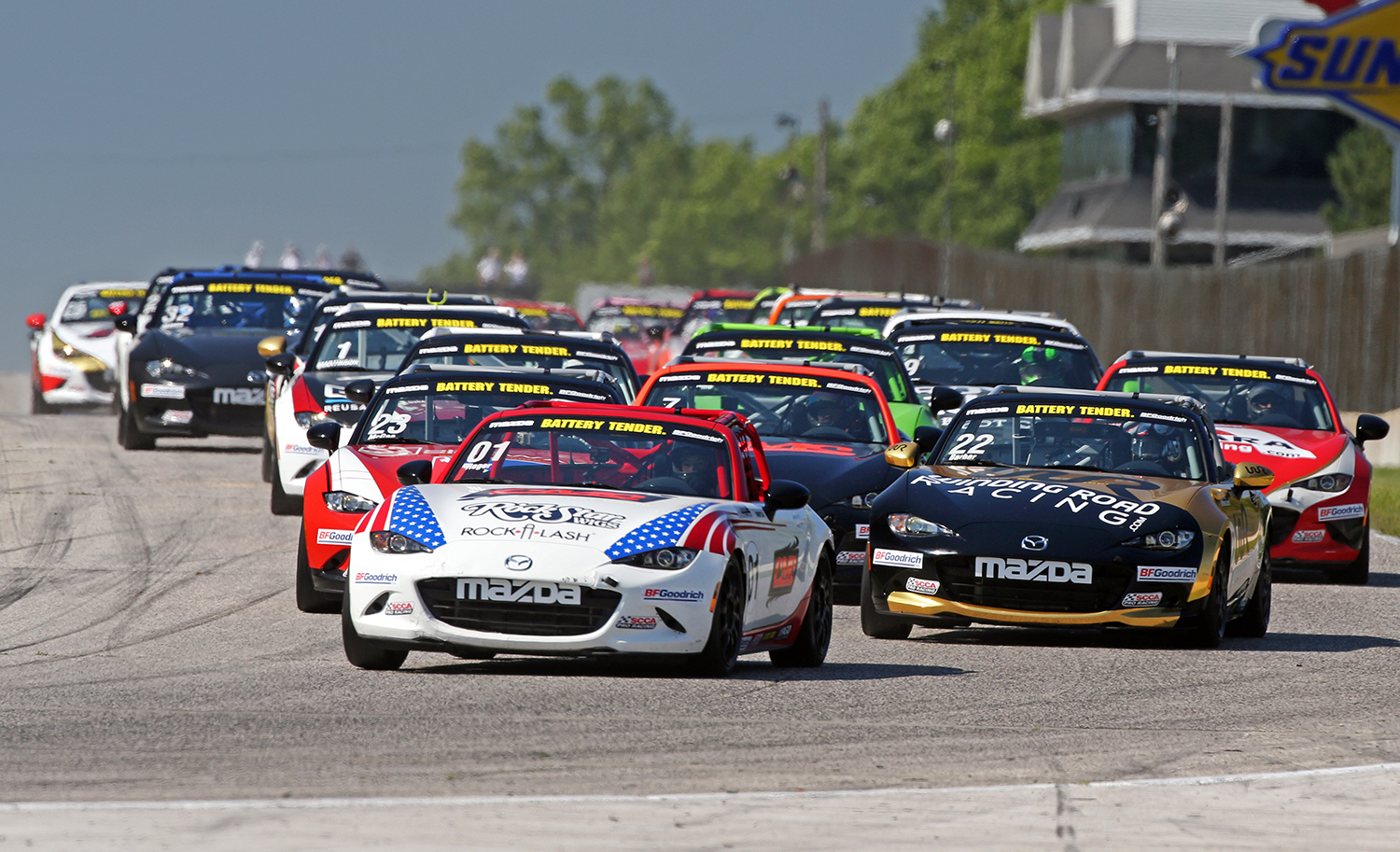 The MX-5 Cup is a very cool series where the winner earns a $200k Scholarship to advance their career. The cars are identical, the motor sealed, and you buy the car directly through Mazda. If only more manufacturer’s offered turn key race cars and well developed series to compete in.

So the new cars launched earlier this year with a $53,000 price tag for a brand new, fully assembled race car. The first 108 cars have been purchased at the launch price and and new orders will costs $58,900 which is still a screaming deal for a competitive race car in a competitive series. All you have to do is visit www.MazdaMotorsports.com and drop a deposit. Four to six weeks later a racecar shows up!

Here’s the full press release with all the details.

IRVINE, Calif. (August 30, 2016) – Mazda Motorsports today announced a number of product enhancements on the Mazda MX-5 Cup race car, which are reflected in a  price adjustment for the next production run.

This price is a reflection of the continuous improvements made between the first car, delivered in November of 2015, and the 100th car, to be delivered to the Monticello Motor Club later this week. MX-5 Cup racecars are purchased directly, and exclusively, from Long Road Racing, Mazda Motorsports’ development and production partner. The order process starts at www.MazdaMotorsports.com. The current lead-time from deposit to delivery is four to six weeks

Mazda has delivered retrofit parts and service for the early build cars as-needed to ensure that every MX-5 Cup racecar is maintained at the latest spec. The primary improvements have been as follows:

John Doonan, director of motorsports, Mazda North American Operations (MNAO), said, “When we launched the new MX-5 Cup racecar, our goal was to provide the best value in sports car racing. We believe we have done that,” he said. “With more than 100 orders to date, many others obviously agree.

“An old adage is that racing improves the breed, and in just the first few months of racing, we have made a few significant upgrades to ensure that the car remains a great value for many years to come. To minimize the need for mid-season rebuilds, we have switched to a motorsports-specific gearbox. While it uses many of the stock components, it is a track-only part. Likewise we have redesigned the engine brackets to better withstand the constant high-speed pounding that is beyond anything seen on the road. The bottom line, is that this car is even better than it was just a few months earlier and we expect to see even more of them on tracks around the world in the years to come.”

About the MX-5 Cup

The MX-5 Cup race cars start as complete MX-5 road cars from the Mazda Hiroshima, Japan factory before being transported to engineering development partner Long Road Racing in Statesville, North Carolina where they are produced into a race car. The process includes disassembly of the production car, welding and paint of a full roll cage and interior, and assembly of the race car, adding more than 250 motorsports-specific parts. Other components of the car, including the Mazda SKYACTIV 2.0 liter engine are sealed to ensure even competition and a cost effective platform.

The Battery Tender Global Mazda MX-5 Cup presented by BFGoodrich Tires is the signature spec series for the Mazda Road to 24 (#MRT24), the sports car counterpart to the Mazda Road to Indy (#MRTI). On both paths, Mazda-powered champions earn a Mazda scholarship to advance their career. The MX-5 Cup champion earns a $200,000 scholarship.

Information on the car is online at www.mazdamotorsports.com.

Mazda Motorsports boasts the most comprehensive auto racing development ladder system of any auto manufacturer in the world. The Mazda Road to 24 program offers a number of scholarships to advance drivers up the sports car racing ladder, beginning with the Global MX-5 Cup series and culminating with the Mazda Prototype team. The Mazda Road to Indy is a similar program that includes Mazda-powered categories of USF2000, Pro Mazda and Indy Lights. In grassroots road racing, more Mazdas race on any given weekend in North America than any other manufacturer. Mazda is also the title sponsor of the renowned Mazda Raceway Laguna Seca in Monterey, Calif. Follow all of the latest news at MazdaMotorsports.com, @MazdaRacing on Twitter, and MazdaMotorsports on Instagram and Facebook.