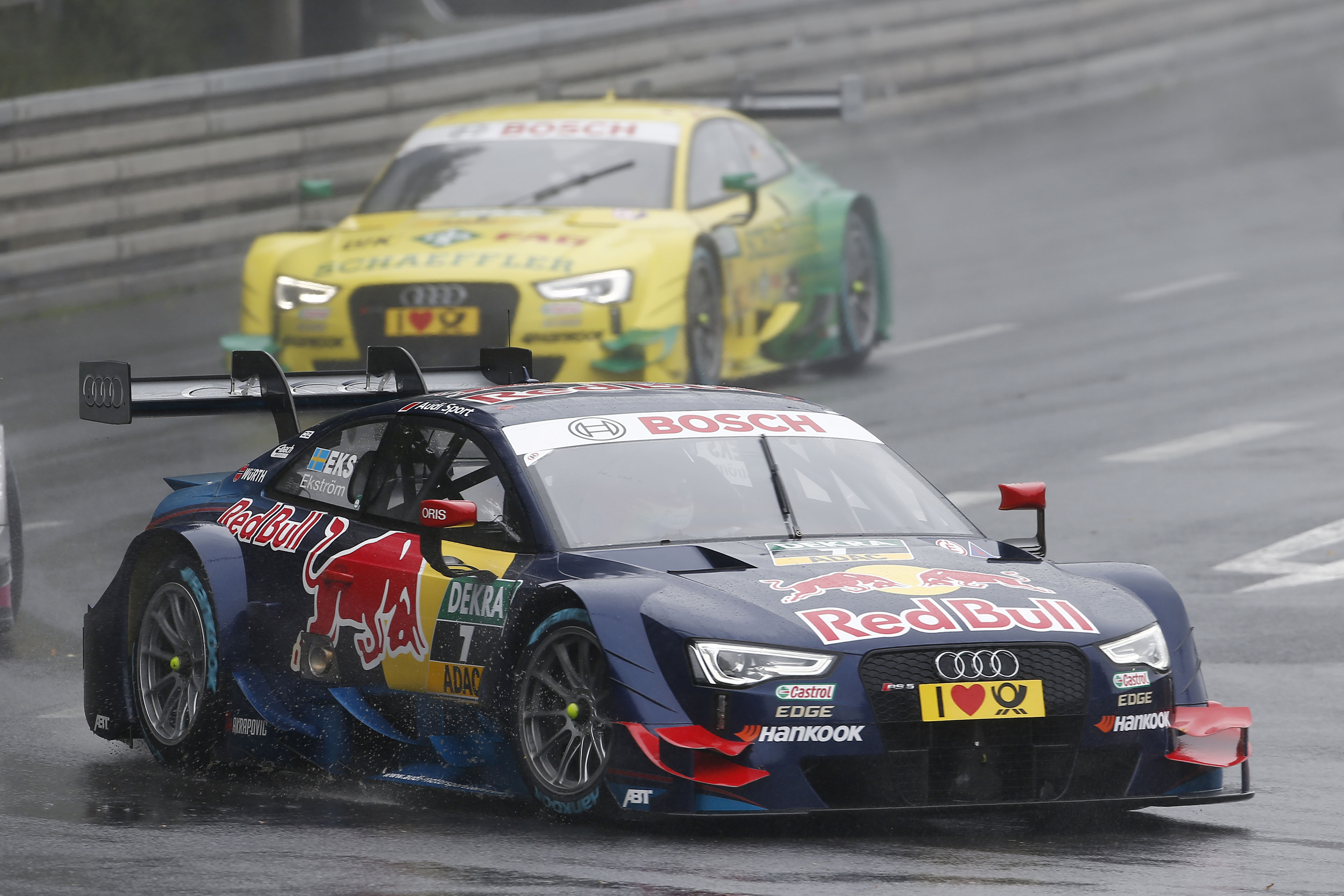 The dream of clinching a home victory in the DTM race at the Norisring has not come true for Audi again this year. Still, 121,000 spectators (throughout the weekend) saw an impressive performance by the brand with the four rings that managed to clearly extend its advantage in the manufacturers’ classification.

Two Audi drivers on podium, three among the top four and six in the points: Audi scored the largest number of points at the Norisring and with a score of 196 in the DTM manufacturers’ standings is clearly ahead of BMW (132) and Mercedes-Benz (76).

In the drivers’ classification, the Audi squad managed to reduce the gap to the leader of the standings, Marco Wittmann. Five Audi drivers – Edoardo Mortara, Mattias Ekström, Mike Rockenfeller, Adrien Tambay and Miguel Molina – are now in the top six spots of the standings. 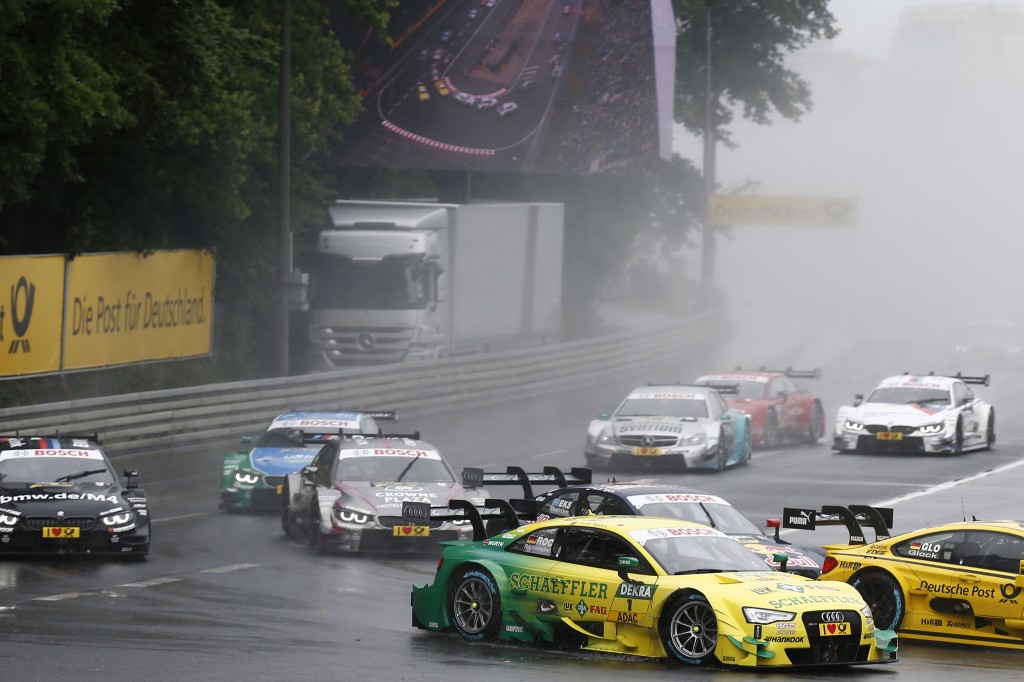 Due to heavy rainfalls the race in Nuremberg was started behind the safety car. When the race was released after three laps there was an incident of contact between Leicester-born Jamie Green in the Hoffmann Group Audi RS 5 DTM of Audi Sport Team Rosberg, who had qualified in third place, and the second-placed Mercedes of Paul di Resta, who had left an unusually large gap between his car and the car in front. A five-second pit stop penalty was imposed on Green, which caused the Briton to lose touch with the subsequent winner Robert Wickens. Still, on finishing the race as the runner-up, the Briton managed to score his best result since switching to Audi.

“It was a funny race for me,” said Green. “Paul di Resta and I are good friends. That’s why the contact was a nightmare for me. I subsequently received a penalty for it, which cost me time. However, I think I couldn’t have beaten Robert Wickens today anyhow, so as far as that’s concerned I’m happy with second place. Many thanks from me to Audi and my team that did a superb job. The Norisring is a very special track. That we were so strong here is a good sign.” 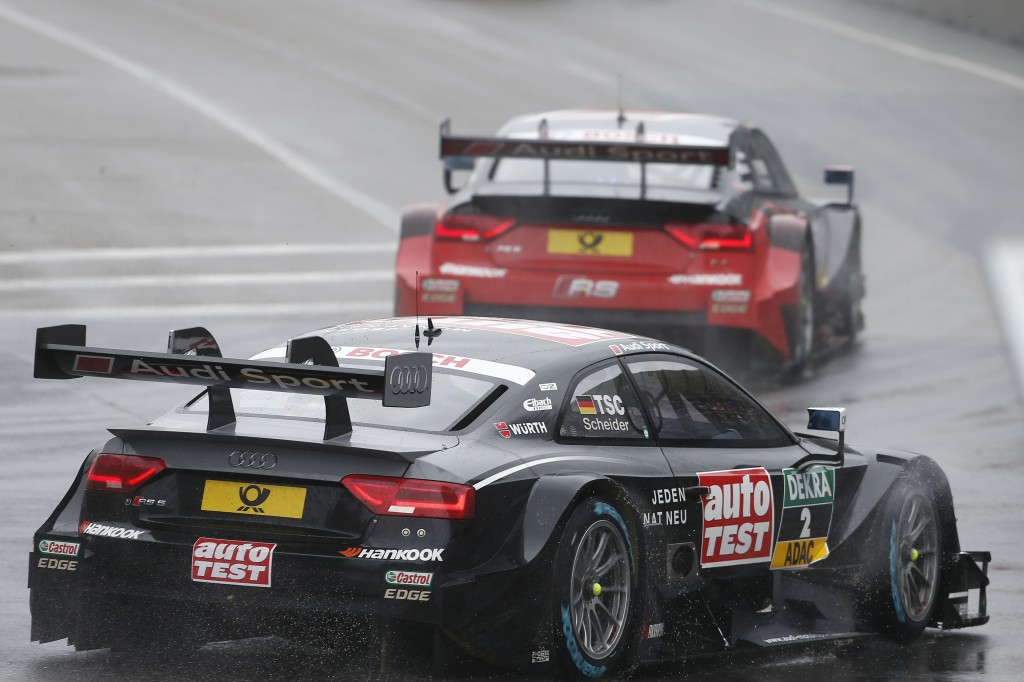 A sensational race was driven by Mattias Ekström (Red Bull Audi RS 5 DTM) and Edoardo Mortara (Audi Sport Audi RS 5 DTM). After qualifying, the Swede had been relegated from seventh to twelfth place on the grid because, in the opinion of the stewards of the meeting, he had obstructed another driver. Despite the controversial penalty the Audi driver managed to recover from grid position twelve to third place and to drive the fastest race lap in the process as well. 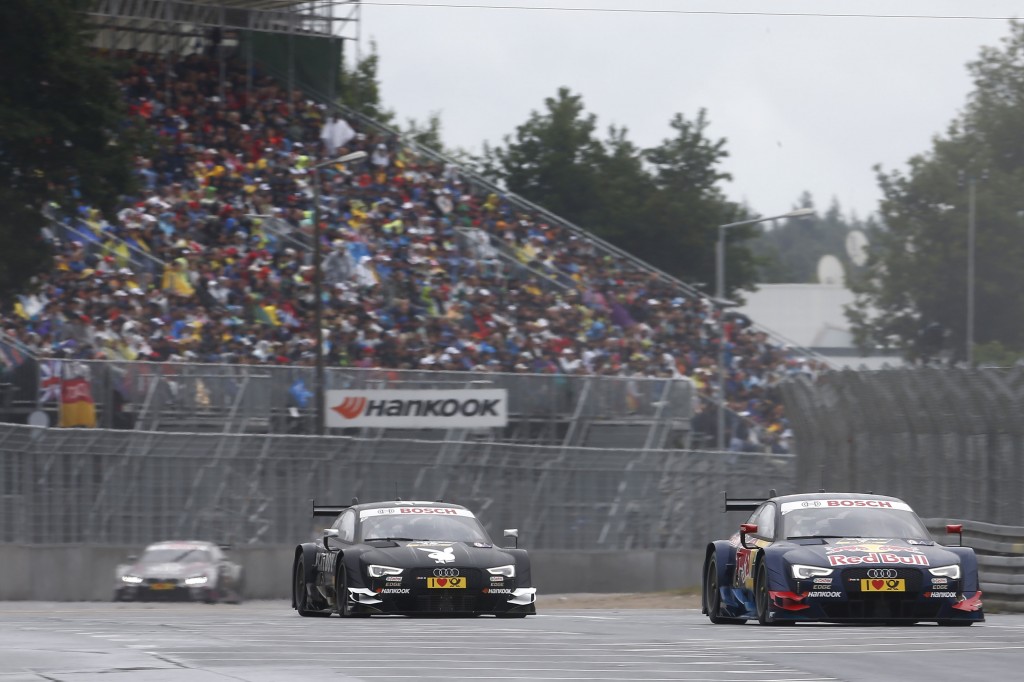 Even more positions – an amazing 14 – were made up by Edoardo Mortara. The Italian advanced from position 20 on the grid to fourth place. With that, Mortara improved to second place in the drivers’ standings.

Adrien Tambay in the Playboy Audi RS 5 DTM was initially another driver of Audi Sport Team Abt Sportsline to make it into the top five. A 30-second time penalty following a collision with Pascal Wehrlein subsequently caused the Frenchman to drop to ninth place. 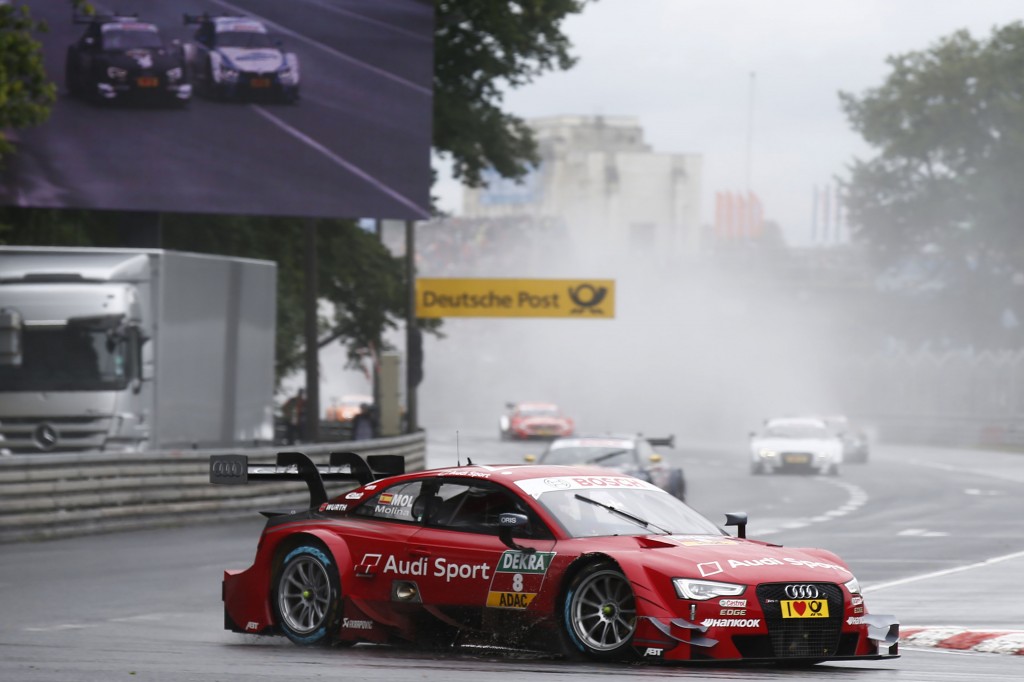 Driving as a tandem almost throughout the race were Mike Rockenfeller (Schaeffler Audi RS 5 DTM) and Timo Scheider (AUTO TEST Audi RS 5 DTM), who scored points in positions eight and ten. The team’s decision to the benefit of the reigning DTM Champion was made when he switched from rain tyres to slicks ahead of his team-mate. 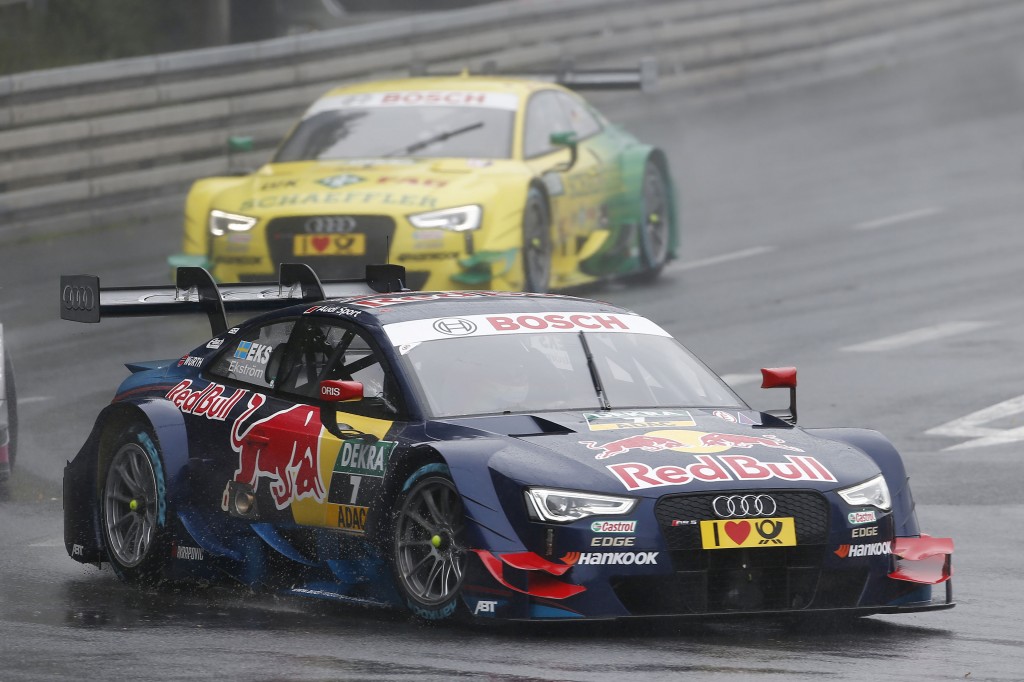 Nico Müller (Audi Financial Services Audi RS 5 DTM) lost his good starting position when he was turned around by Joey Hand in the early stage of the race. A drive-through penalty he received for failing to observe blue flags cost additional time so that the young Swiss finished his first Norisring race in 18th place. Miguel Molina was classified in 22nd place although, shortly before the end of the race, he had to park his Audi Sport Audi RS 5 DTM in the pits early following contact with a wall.

Dr. Wolfgang Ullrich (Head of Audi Motorsport): “Following the success in the Le Mans 24 Hours and the 24-hour race at the Nürburgring we’d have obviously liked to finally win our DTM home round at the Norisring. Unfortunately, it didn’t work out but that’s no reason to be disheartened. Quite the opposite is true: We saw a really strong performance by the whole Audi squad and scored more points today than in the first three DTM races – that’s never been the case before at the Norisring.”

Dieter Gass (Head of DTM): “It wasn’t a victory but Audi was strongly represented at the front: six Audi drivers in the points and two on podium. We’ve got to be happy with that even though, unfortunately, we again didn’t manage the leap onto the centre step of the podium. The positive part is that we’re competitive on all tracks and in all conditions. Now we’re set on finally clinching our first victory of the season – and that’s our goal for the next race at Moscow.”

Jamie Green (Hoffmann Group Audi RS 5 DTM), 2nd place
Tyres: rain/option
“This was a step in the right direction. Of course it would have been great to win here for Audi. That was our goal and we didn’t quite achieve it. But the race had a bad beginning with an incident with Paul di Resta following the start behind the safety car. His line and his speed surprised me. Unfortunately, we had body contact and as a result I lost time on the leader, Robert Wickens. I received a drive-through penalty. Looking at the whole action I can be happy about second place. I’m also happy about the first podium I’ve clinched with Audi Sport Team Rosberg. We can build on that.”

Mattias Ekström (Red Bull Audi RS 5 DTM), 3rd place
Tyres: rain/option
“It was a good day. I enjoyed driving the RS 5 DTM. The car was good on a dry and a wet track. I’m not celebrating third place like a victory but we scored points for the Championship and set the fastest race lap. We showed that we’re in contention in the battle for victory. Unfortunately, we’ve got to wait for a whole year before we compete here again.”

Edoardo Mortara (Audi Sport Audi RS 5 DTM), 4th place
Tyres: rain/option
“It was a crazy race for me. We advanced from grid position 20 to fourth place. We had a great car and a good rhythm. I’m very pleased and look forward to Moscow.”

Mike Rockenfeller (Schaeffler Audi RS 5 DTM), 8th place
Tyres: rain/option
“This is a very disappointing result. A good result would have been possible from where we started – as other drivers have shown. They made up a lot of positions. And we didn’t. At the beginning of the race, I lost a few places because the car was slow on rain tires. In the middle of the race, the situation improved and the team also told me to pit at the right time. But, unfortunately, in the end there were some problems with the brakes and I was happy to have finished the race and to have scored four points.”

Adrien Tambay (Playboy Audi RS 5 DTM), 9th place
Tyres: rain/option
“It was a tough race and it would have been easy to make a mistake and to retire. I made no mistakes. We had a small incident with Pascal (Wehrlein), and I’m sorry about that. Driving on slicks on the wet track was difficult.”

Timo Scheider (AUTO TEST Audi RS 5 DTM), 10th place
Tyres: rain/option
“One point! From the back, where we started from, that’s basically okay as far as that goes. That had also been our goal. We made up eleven places. But we’re out to battle for victories, not just for points – so from that perspective it’s not satisfactory. The race was fun. I had a lot of battles and time passed relatively quickly. The pace which the car had in the various conditions was good. From that point of view, we’re now going home with a black eye.”

Nico Müller (Audi Financial Services RS 5 DTM), 18th place
Tyres: rain/option
“In the chaos following the start, Joey Hand made a braking mistake on lap two and turned me around. Afterwards, I was all the way at the back. We took a gamble that the safety car would be deployed and immediately pitted but the safety car didn’t come out, so we found ourselves at the rear. The situation with the blue flags didn’t work well. I waited too long, received a drive-through penalty and lost another lap. It was a disappointing race.”

Miguel Molina (Audi Sport Audi RS 5 DTM), 22nd place
Tyres: rain/option
“We had a pretty aggressive strategy in which we pitted at the first opportunity. With hindsight, it was the wrong decision because the track began to dry and there was no safety car period either, which we’d been speculating on. Obviously, I’m disappointed with this race weekend but we’re still in a good position in the drivers’ standings. If we keep our rhythm we’ll be able to continue the good results of the first races.”

Hans-Jürgen Abt (Team Director Audi Sport Team Abt Sportsline): “It was a gripping race. Mattias (Ekström) and Edo (Mortara) advanced very far from the rear. That was sensational. But Adrien (Tambay) did a superb job as well. The strategy with Miguel (Molina), unfortunately, didn’t pan out. But we’d discussed it before and wanted to try it. We’re happy with the team result and have good prerequisites for the next race.”

Ernst Moser (Team Director Audi Sport Team Phoenix): “A superb race for Audi. A great result. Congratulations to Mattias (Ekström) and Jamie (Green) on clinching the podium places. We even battled our way forwards from the rear but, unfortunately, didn’t quite keep pace. It was impossible to make this up in the end. But we still scored points and are now looking ahead.”

Arno Zensen (Team Director Audi Sport Team Rosberg): “I’m very pleased. It was a great weekend. ‘Well done’ to Jamie (Green), he did a sensational job. I’m also happy for the team. The guys deserve this. For Nico (Müller), it was a shame that he was turned around because his pace was good. He brought the car home. That’s an honourable achievement on running at the Norisring for the first time.”