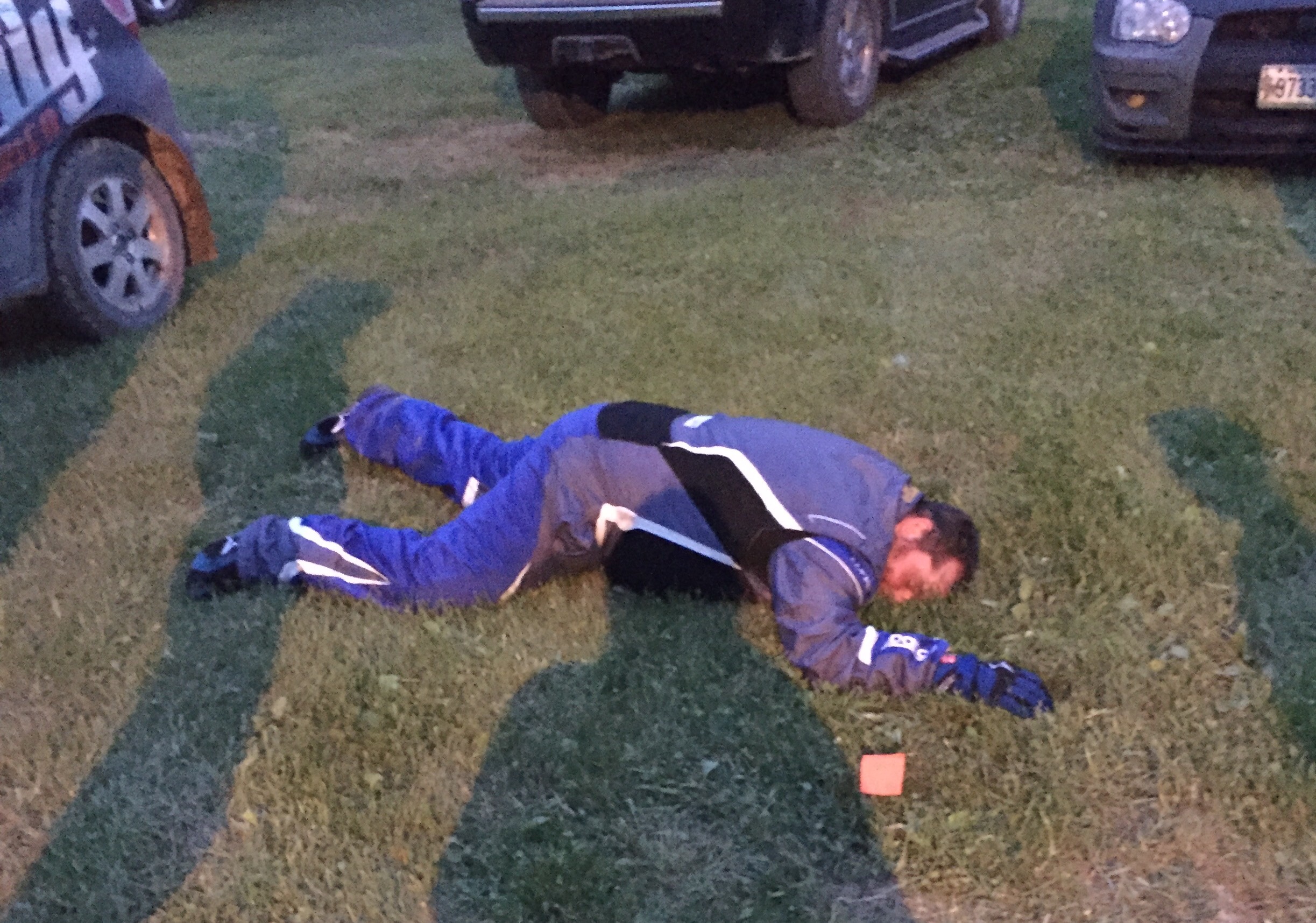 STPR had four B-Spec entries, but Matt Hoffman in the Sonic was just getting out of the co-driver’s seat and opted to run just the regional events.  In national, that left the usual suspects, myself and the Maxxis/HRD entry with Jordan Guitar and Billy Jang.  The last entry was Nitro Circus’ Tommy Passemante, more commonly known as Street Bike Tommy.  Tommy had Tracey Gardiner in the right seat and was competing in his first-ever stage rally in the Rally America “Star Car,” a Honda Fit driven by Peter “Petey” Cunningham and Eversley at 100 Acre Wood earlier this year.  Travis was taking bets from even two year-old daughter, Addy, on how far Tommy would make it before crashing.

Waste Management I (SS1) had a red cross thrown prematurely.  We were stopped in less than four miles, and the whole thing ended up being a huge mess which resulted in us getting shafted by a minute (behind the Fit) with our assigned time for the stage.  Jordan and Billy were lucky enough to finish the stage before the red cross.  Having been able to complete the stage at speed was also a big advantage for the way back out on Waste Management II, where they beat us by another forty-five seconds.  Guitar had us by another ten seconds in the Super Special, after I killed it at the start which lost us a healthy amount of time.  To make things funnier, Pastrana was the one to crash after one stage (on SS2), and Tommy was in second, also beating us by fifteen seconds.

The next morning, it was clear we needed to win the first stage of the day.  Asaph could easily be called the most treacherous stage of the rally and we knew prior to starting that we would see cars off on stage.  My plan: push in here, but leave just enough on the table.  Worried that the first mile wasn’t quick enough, I turned it up a notch (or maybe two, or three).  But then we arrived at a corner that Ole knew well and saw our Honda competition off.  A sigh of relief followed, and I dialed it back.  Remembering that we still had to make up some time on Tommy, I kicked it back up just a little to finish thirty seconds ahead, making up the time we were behind and then some.  Asaph bit ten other cars on stage, including Trav, who gave me a sheepish grin and thumbs up as we passed by, while Christian sat next to him on the hill looking irritated.  After a few corners, I saw no Subaru, just marks on a tree on the outside of a corner where the only place to go from there was down.  As it turned out, trees had to be removed to extract the car from its landing spot.

We walked away with another twenty seconds after the following stage, Thompson (SS6), but at the beginning of transit, as Ole and I were taking helmets off, we were radared going over the noted speed limit, resulting in a 3:30 penalty.  Now, this is a penalty that doesn’t show up right away. It wouldn’t be there until later or possibly the end of the rally.  We already had thirty-two seconds of that made up, so we looked at it as six stages, just under eighty miles, (discluding the supers) to make up those three minutes… so at an average of thirty seconds per stage, it seemed do-able.  After making up only ten seconds on Lebo I (SS7), seventeen seconds on Randall I (SS8), and thirty on Cedar (SS9), I knew we needed to widen the margin in the final leg.  We were making up a good chunk of time on Lebo II, but after understeering into a corner that I had gone wide on the first time around, we needed to be pushed out of a small berm and lost somewhere upwards of 1:15. This put our gap back to a bit under three minutes with 33 miles to go.  We were able to take back thirty seconds on Thompson II’s twelve miles and nearly a minute thirty on the final Mine Hole (SS12).  For the final event of the rally, it was decided that Tommy and I would go head-to-head in the fairground Super Specials to close out the night.  Looking back on the times, it appears that Tommy and Tracey managed to beat us by a fraction of a second on the first Super Special of the evening, though we thought we had crossed the line first.  The second time around, I managed to pick up an extra three seconds.  In the end, we finished fifty five seconds behind the Star Car.  At the finish, we congratulated the pair on a great rally and admitted that we had received a penalty and had been trying to make it up.  To the regular viewer, it appeared that we had been winning by over a minute and a half.

A win would have put us in the lead for the season championship, but rather, it narrowed the gap to just four points going into New England Forest Rally.  After our first few events, it was refreshing to simply have hope for the remainder of the year.  On the podium, Tommy humbly commented that the win should have been ours, though I have said he beat us fair and square.  Whether we had not made the careless mistake after Thompson, or had I not been too eager to make up the time we had lost, we would have won, but they are nonetheless mistakes.  Even more regretfully, I was looking forward to seeing how my times on day two would have stacked up against those of Jordan’s, especially on Asaph had they finished.