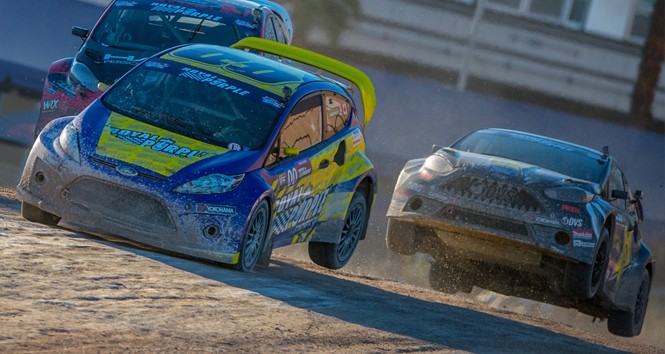 To the untrained eye, the 2015 Red Bull Global Rallycross Supercar field might look pretty similar to last year’s lineup. After all, most of the same faces will be returning to the grid, with their numbers (and manufacturer partnerships) intact.

But beneath the surface, there’s actually been quite a bit of change on the grid, with two new teams, a bevy of new vehicles, and even a handful of new sponsors joining the series. Here’s a quick look at what’s changed so far, and what to watch for this year:

The first major splash of the offseason came in March, when Chip Ganassi Racing announced a two-car team for Steve Arpin and Brian Deegan for the 2015 season. Both Arpin and Deegan will race M-Sport Fords, with Arpin running every race and Deegan competing in a majority of events.

At Media Day in April, Bryan Herta Rallysport announced its own two-car effort, also featuring M-Sport Fords. Austin Dyne, who had raced with Herta last season under the Barracuda Racing banner, will stick with his longtime mentor, while Patrik Sandell also jumped to the new organization.

Defending team champion Olsbergs MSE replaced Sandell with 2013 GRC Lites runner-up Sebastian Eriksson in one of its two cars. It marks the second straight year that OMSE will promote a Lites star, with Joni Wiman having made the same transition last year (and winning the title, to boot). Wiman returns to defend his crown in the other vehicle.

Now the only other Ford team using an OMSE-built car, SH Racing Rallycross returns to the grid with Nelson Piquet Jr.for another go in 2015. New sponsor Hydroxycut will back the team in a majority of races, while the team is staffed to run two cars in its new Indianapolis shop should the opportunity arise

After taking its first race victory last fall, Subaru Rally Team USA will introduce a new WRX STI for 2015. For the fourth consecutive season, Sverre Isachsen and Bucky Lasek will race for the team, while Travis Pastrana has been confirmed for another limited schedule. The team has four of last season’s vehicles available as well, meaning that more drivers could make it to the grid this year.

The Volkswagen Andretti Rallycross squad will have Beetles for a full season for the first time in 2015. Tanner Foustand Scott Speed will both return to the team.

Finally, one of the most formidable combinations in Red Bull GRC remains intact for 2015: Hoonigan Racing Divisionwill feature Ken Block racing an M-Sport Ford for the third straight year. Last season, the combination fell just five points short of the Supercar title, while Block became the winningest driver of all-time in Supercar heat races with 30 total.