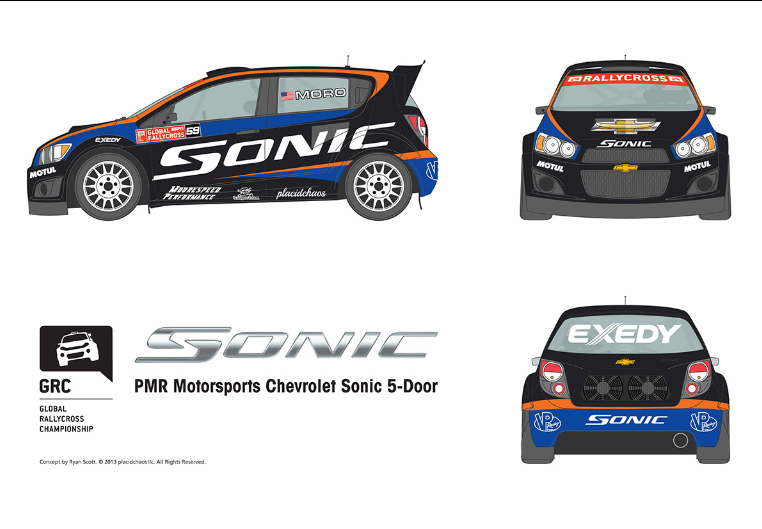 DUBLIN, OH (April 16, 2014) — PMR Motorsports is pleased to announce that it will return to Red Bull Global Rallycross for the 2014 season in conjunction with Chevrolet. Owner/driver Pat Moro will return to the #59 Chevrolet Sonic for a minimum of four events, while the team will debut its second vehicle at the series’ Detroit round on August 2-3.

“It’s great to be back with Chevrolet for the 2014 Red Bull GRC season,” said PMR Motorsports owner/driver Pat Moro. “Their knowledge and assets are a great resource to our team. We’re looking forward to building on the partnership that we formed last season and becoming more competitive this year.”

“I look forward to seeing Pat Moro and his Chevrolet Sonic return to competition in select events of the 2014 Global Rallycross season,” said Mark Kent, Director of Chevrolet Racing. “The PMR Motorsports Sonic was introduced near the end of the 2013 season and demonstrated great potential.  In 2014, I fully expect to see Pat contending for wins in his Chevrolet.”

Over the past decade, PMR Motorsports has developed a strong track record, with Moro winning two Super Production championships in Rally America in 2008 and 2010. He made his debut in GRC in 2011, gaining the support of Chevrolet in 2013 and debuting the new Sonic in Charlotte last September.

PMR Motorsports and Pat Moro are currently scheduled to appear at the following events: