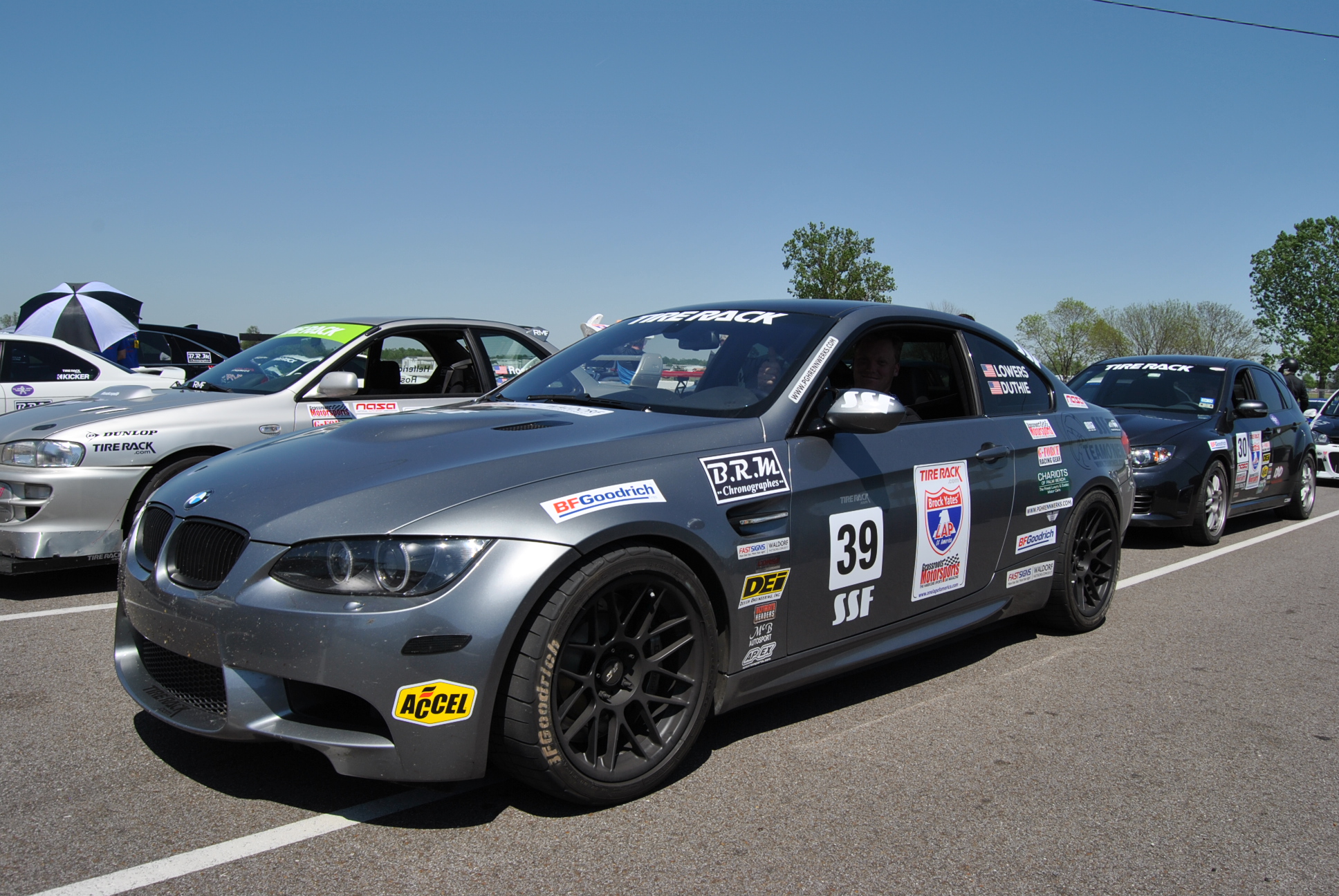 It’s 1300 on May 2nd, 2014, and we’re late to the start. Tech inspection ends at 1600 and the drivers meeting beings immediately after. We’re definitely going to miss both. Not the best start to our first One Lap. I’m in the passenger seat of my ’09 M3 and Justin is in the drivers seat trying to make up some time. He was supposed to arrive in Pittsburgh last night from Florida but weather delayed his flight and he didn’t make it in until 930 this morning. We hit the road around 1030.

It’s a six hour drive to the Tire Rack facility in Indiana from Pittsburgh. We call Brock Yates Jr and tell him we’re behind. Embarrassing. “Don’t kill yourselves and just get here when you can,” he says.

The event we’re late for is the Brock Yates One Lap of America, the modern day Cannonball Run. The famous race from New York to LA has been taken off the streets for the most part and is now a NASA sanctioned event consisting of driving events along a predetermined route. We start and end at the Tire Rack facility in South Bend, Indiana, going as far south as New Orleans and as far east as New Jersey Motorsports park over the course of eight days. We will be competing in track days, drag races, auto cross, and skid pad events. The event is about endurance, both vehicle and driver, and we have heard that sleep will be in very short supply.

The car we are in is a supercharged and track prepped 2009 E92 M3 making somewhere over 500hp. We will be up against other M3’s, GTR’s, Porsches, a twin turbo Audi R8 V10, some crazy Volkswagen GTI’s, and many more. While very familiar with driving cars on racetracks, my co-driver Justin Duthie and I are rookies to the event, know as “lap puppies” up against an entire event full of veterans, known as “lap dogs.” Only time will tell how we hold up and if we can compete on the level of some of the pro drivers we will be coming up against.

We don’t have any real goals for ourselves other than bringing the car home in one piece and being able to remain friends after sitting in a car together for over a week. I’ll do doing the track driving and Justin will be handling most of the transits so I can get some sleep and send out some content. I will be submitting an entry from every day of the event to try to give the reader an idea what it’s like to embark on this crazy competition. For now, we’re just hoping we fcan breeze through tech and a few beers tonight before the chaos ensues tomorrow.

Today is the first official day of the 2014 One Lap of America! We actually woke up at a decent hour and arrived at the skid pad at a respectable time to begin the first competition of the event, a wet skid pad run at the Tire Rack headquarters in South Bend, IN.

We didn’t quite know what to expect for the event. I have done some skid pad testing before at various car control clinics and HPDE’s, but never in a competitive setting where our maximum achievable g-force would decide the winner. After unloading the vehicle we were given the 39th starting slot of the day. This way good news to us as we would have some time to observe the other teams take their skid pad laps. We were to enter the skid pad at a counter clockwise direction and do two laps, then turn around and do two more in the clockwise direction.

When our turn came up I was admittedly nervous. I am a left foot braker and was hoping my strategy of pushing the car to the far inside of the pad as possible and driving with both feet would allow me to push the car and the tires to the limit of grip while balancing the car with the brake and gas. I was given the green flag and went for it, achieving .609 G’s on the BF Goodrich Rival tires we are running. We have a dry skid pad on the last day of the event and hope the aggressive summer tires we are running will put up some impressive numbers.

We loaded the car back up and left the tire rack facility for a 100 mile jaunt south to Grissom Air Force Base where we would be competing in a autocross event. We needed a T45 Torx bit socket to adjust our front camber plates to give us more front grip, and unfortunately in the rush to leave I only grabbed a T40, so we were going to have to deviate from the course a bit to find the tools we needed. This led us through an interesting detour through the town of Peru, Indiana where we found a Autozone and some tasty roadside BBQ.

As good as the BBQ was, our detour had cost us. We arrived just as the autocross was about the start and did not have a chance to do any recon on the course. Our only hope was to spectate from as many positions as possible to try to learn the course and the lines. We would have three runs to set a fast time, so I wouldn’t have to go all out through the first one.

The initial run was fun, but I missed two sets of cones, making the run a DQ and wouldn’t be counted. It was great to get out on the course and learn the line a bit to set myself up for making some time on the second. When run two ended, I had shaved three seconds from my first run time, and managed to shave another second on my final run. We still don’t know where that places us overall as results have not been tallied, but we’ll soon find out.

We are currently in transit south of Indianapolis heading to the National Corvette Museum where we’ll get to see some cool cars and a Vette-hungry sinkhole. After that’s through we have a four-hour haul to Memphis, TN where we will be competing in road course and drag racing event tomorrow.  Attempts to upload Go-Pro footage from todays event has failed with our tethered Internet, but we’ll get them uploaded at the hotel tonight! The car is running great and we’re in good spirits.

One Lap day 3 and we are enjoying the NOLA sunshine as we cruise over lake Pontchartrain. Did we really leave South Bend, IN on Saturday? Yesterday we raced in Memphis, TN at Memphis international Speedway in a road course and drag race event. The first road course session was a little rough as we were under the impression the fastest of our three laps counted, but it turns out cumulative time for the three laps decides your place. I used my first lap as a recon and did not push the car very hard, saving that for the final two laps. This resulted in a 32/53 placement. Once I was informed of my error I was determined to push the car and shave time the next time out.

During my next session the car in front of me spun out on the untimed warm-up lap. This was concerning to me because I was worried about catching the driver and not getting a clean pass, costing us time. I should have passed him at the line-up but did not. We are spaced 20 seconds or so apart from our launch and given the green flag individually to attempt to keep us from catching the car in front of us.  As the green flag dropped I was determined to go as fast as I could, brake late, and throttle as early as possible. It’s what this event really is about, the basic fundamentals of high performance driving. Keep your eyes up and ahead of you, brake in a straight line, and be patient with the throttle.

By the third lap of the second session I was on the bumper of the Focus ST placed in front of me. Since we are rookies to the event the organizers did not really know where to place us, we were just running by car number. I wanted to pass fast and predictably, so I waited until the inside of the first turn where I knew the focus would run wide. Sure enough I made a clean pass, got back on my line, and kept as much throttle in it as I could past the finsh line, improving my time by nearly 10 seconds from the first session. Everyone else improved too, making us 29/53 for the second session.

Next up, a straight up top-speed quarter mile drag race. I handed the keys to Justin for the event and told him to have at it. Drag racing definitely requires its own unique skillset, but I’m a road course guy… best to let the co driver have some fun punching it in a straight line. I knew roughly what the car would do after drag racing during The America Adventure in October. Justin hit my expected time on the nose, a 12.28, good for 6/53! The only cars that beat us were GTR’s and Vipers! We even beat the supercharged Mercedes SLR! Next up, bracket racing!

Bracket drags are something I knew the car would be good at. We have the dual clutch transmission that lets the driver place the car in D and punch it, allowing the car to shift itself and produce consistent results. Justin ended up tying for 5/53, a great result! The big story from the drag race was the defending champions from Topspeed Motorsports breaking the transmission in their Audi R8 V10 twin turbo and having to retire from the event. We loaded up and pressed on from Memphis to New Orleans.

Transit was… fast. Lets just say if you ever need to get somewhere quick, just follow Brock Yates. Upon arriving in NOLA us and team RMF discussed our options and decided even though it was getting late and we had to be up at 6am it was worth losing the sleep to head down to Burbon Street for some local culture and some adult beverages. We enjoyed ourselves thoroughly. The morning brings a fast track, NOLA Motorsports Park, a short transit to Mobile, AL for an oval track, then a five-hour haul to Atlanta.