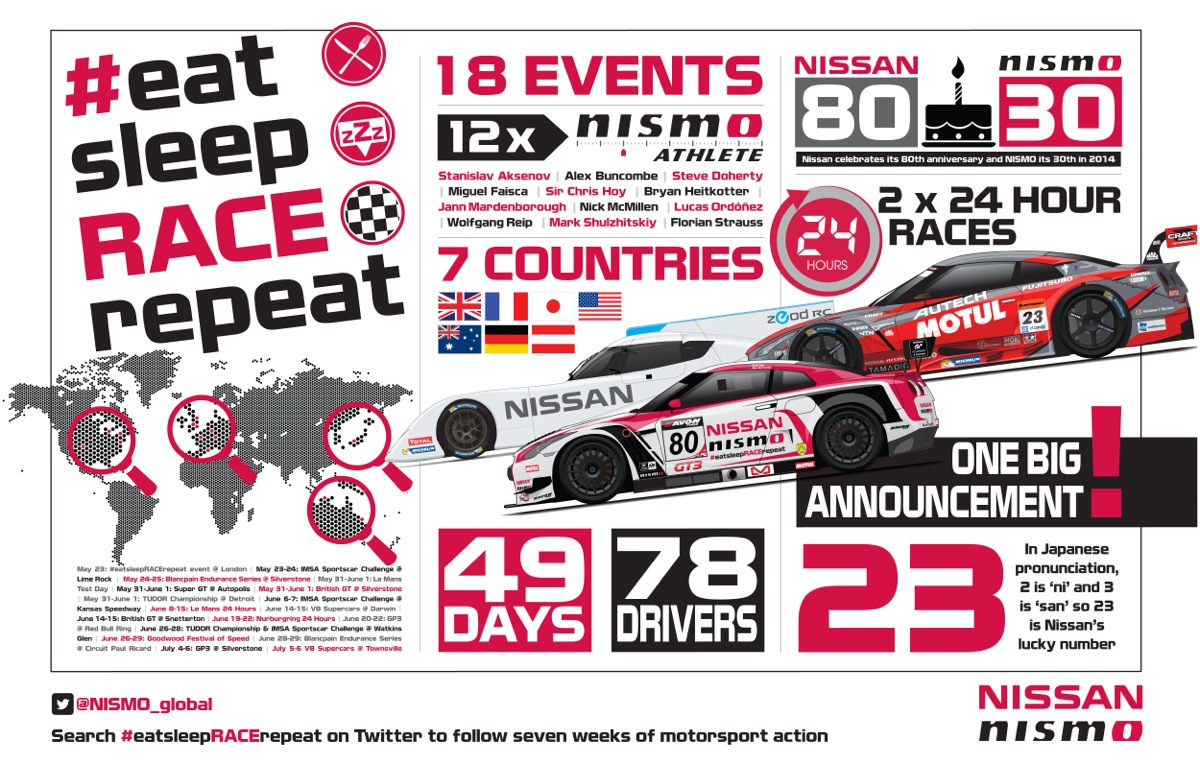 On any given Sunday, NISMO competes across the globe in an intense schedule of events. The next six weeks turn that intensity up to 11. During the week that heralds the Monaco Grand Prix and the Indy 500, Nissan has announced its commitment to #eatsleepRACErepeat through some of the biggest events in motorsport this summer.

“We want the fans to come with us on this white-knuckle ride through the summer via the hashtag #eatsleepRACErepeat,” said Darren Cox, Global Head of Brand, Marketing & Sales, NISMO. “Tell us what stirs your soul about racing. Send us your photos, videos and opinions and we will spread your passion during this amazing period of motorsport.” 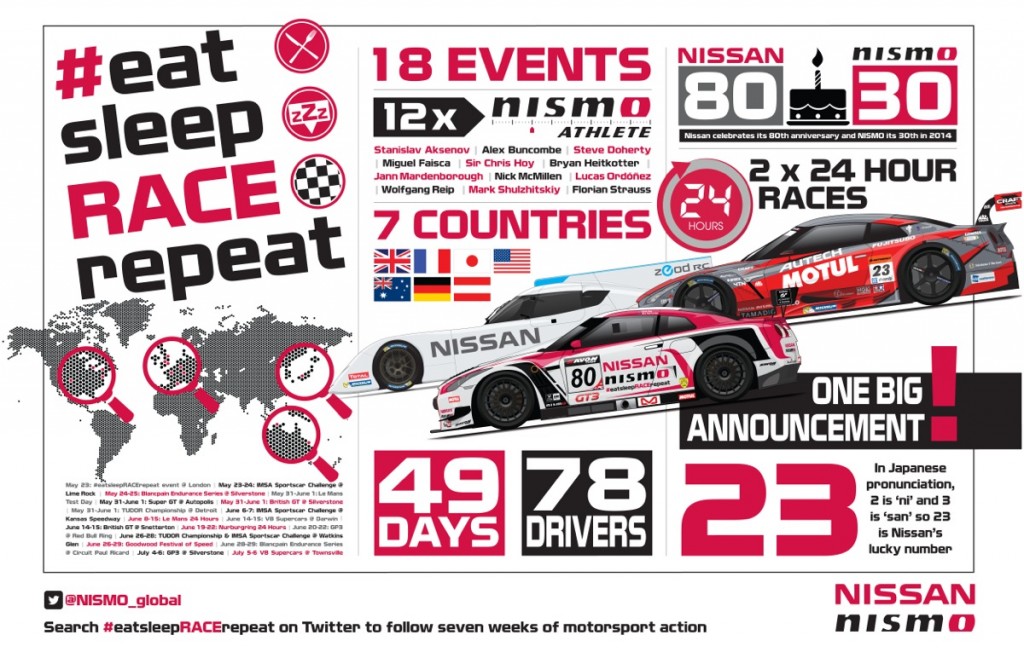 The summer campaign will go from Silverstone to Le Mans, to the U.S. and Australia, the Nurburgring to Autopolis in Japan, as the successors of the maverick Nissan engineers who founded NISMO 30 years ago continue their legacy of innovation and excitement for everyone.

“We are celebrating the fact that we do things differently,” said Cox. “A lot of people think that NISMO just stands for Nissan Motorsport. What it really stands for is everything we love about racing: the passion, the close calls, the rivalries, the crowds, the wins, the losses, the cars, the history – it’s what we love, it’s what we do.”

“This campaign brings together all of our racing programs this summer,” said NISMO President, Shoichi Miyatani. “We are a global company and now fans across the world can stay on track with us via #eatsleepRACErepeat.”

Nissan’s #eatsleepRACErepeat schedule starts this weekend when the newest NISMO Athletes, who have only recently made the transition from gamer-to-racer, compete in the Blancpain Endurance Series at Silverstone. All of them made a strong debut at Monza last month and will be out to show what they can do at the track where they won GT Academy to become racing drivers.

The following weekend will see Nissan ZEOD RC take to the track for the Le Mans Test Day, while the Super GT teams – including Lucas Ordonez, the first winner of GT Academy – compete in Japan. Nissan’s British GT squad of Sir Chris Hoy and Alex Buncombe race at Silverstone, where Hoy will take part in his first three-hour endurance race. 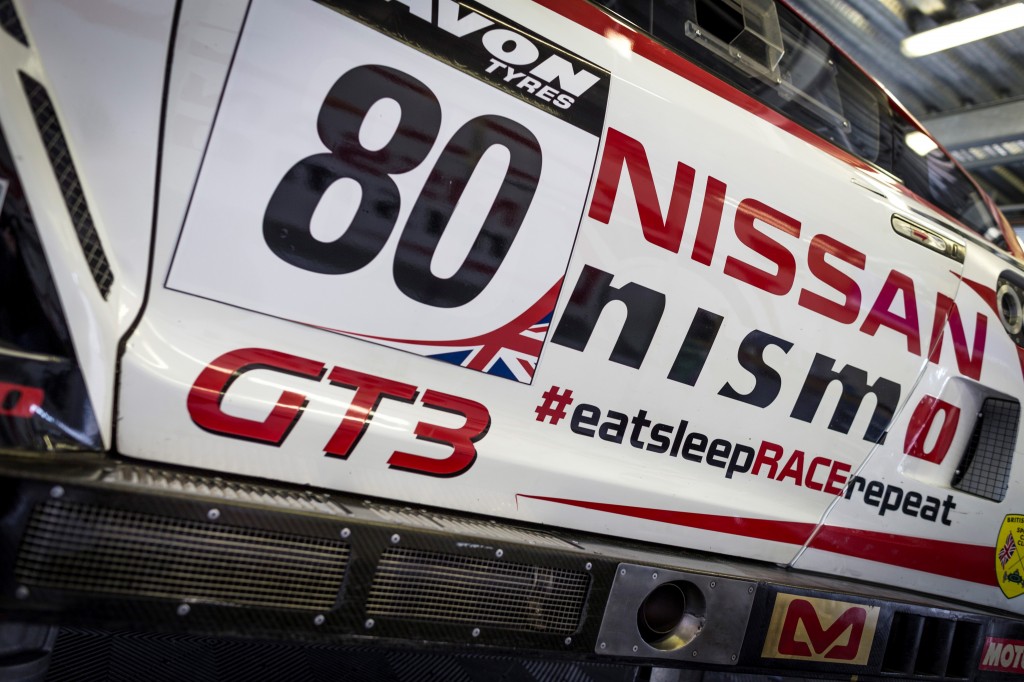 The summer of motorsport continues right through June with the Le Mans 24 Hours, where over a quarter of the entire grid will be Powered by Nissan. The NISMO-tuned Nissan VK45DE V8 engine has powered the LM P2 winners to victory twice in the least three years. Le Mans will of course see the debut of the Nissan ZEOD RC, Nissan’s revolutionary race car that will become the first car to complete a lap of Le Mans on nothing but electric power.

Up next will be the daunting Nurburgring 24 Hours where maximum attack is the order of the day for a global line-up of drivers and an engineering crew from Europe and Japan, GP3 action for Jann Mardenborough, more British GT and Blancpain Endurance thrills and spills, V8 Supercars in Darwin, and of course the glorious Goodwood Festival of Speed.

To celebrate NISMO’s summer of non-stop racing action, Nissan has remixed a famous dance tune, the result of which will debut this Friday when Nissan gathers the world’s media in London for an announcement about its future in motorsport.