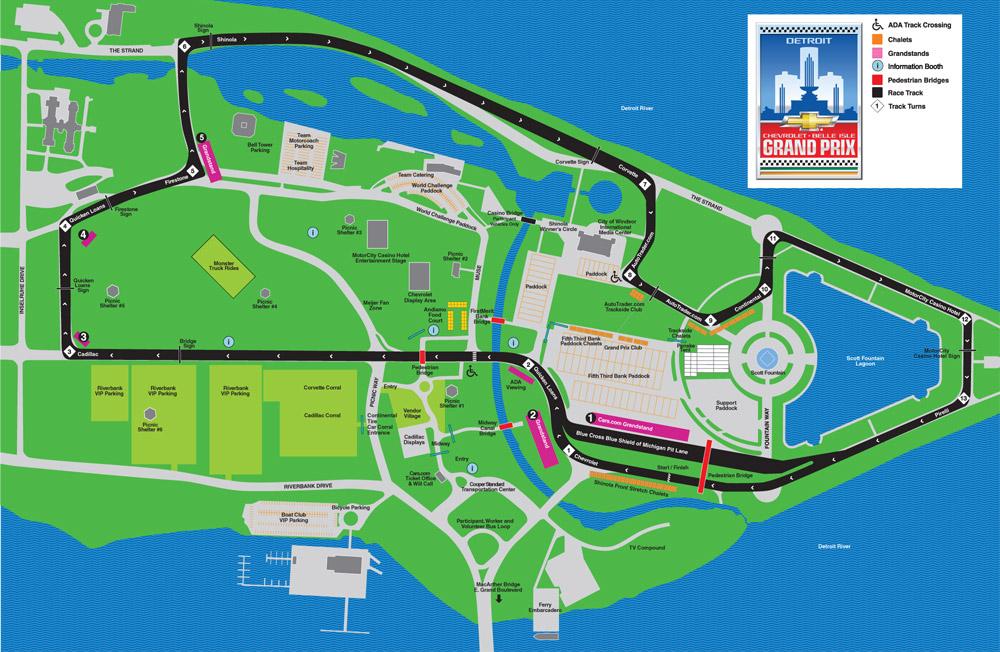 Much like the recent event on the Long Beach Street Circuit, this weekend’s event on Detroit’s Raceway at Belle Isle carries undeniable prestige for the inaugural TUDOR United SportsCar Championship schedule. And, also like Long Beach, it vividly represents the “best of both worlds” mantra that served as the over-arching guidepost for the landmark sports car merger that created the TUDOR Championship.

Racing in Detroit offers added across-the-board value, as it’s home to many of the auto manufacturers participating in the TUDOR Championship plus numerous supplier partners.  As far as the schedule goes, it’s sort of a “must.”

Belle Isle previously was on the schedules of both the American Le Mans Series presented by Tequila Patrón and the Rolex Series, with those two series racing in conjunction with the IndyCar Series. This weekend, the TUDOR Championship’s Chevrolet Sports Car Classic Presented By Metro Detroit Chevy Dealers combines with IndyCar’s Detroit Chevrolet Belle Isle Grand Prix.

Belle Isle is a 982-acre island located in the Detroit River between Detroit and Canada, which officially became a Michigan state park earlier this year. In what is to be an all-out sprint race in the Motor City, the  TUDOR United SportsCar Championship is set to take on the 2.360-mile, 13-turn Raceway at Belle Isle Park for the first time in a 100-minute sprint, featuring the Prototype (P) and GT Daytona (GTD) classes.

General Motors vs. Ford Prototypes in the Motor City:

Chevy has had the upper hand over the past two years in Rolex Series Daytona Prototype competition, with Action Express Racing and Wayne Taylor Racing taking home victories at the Motor City showdown.

As the 2013 winning No. 10 Konica Minolta DP of Wayne Taylor racing with  Jordan and Ricky Taylor returns to Belle Isle Park the pressure is on. “This is one of our biggest races of the season, right up there with the Rolex 24 At Daytona and Mobil 1 Twelve Hours of Sebring,” said Jordan Taylor, who also won at Detroit in 2012 driving a Chevrolet Camaro in a GRAND-AM Rolex Series GT race. “When you look up on pit road and see the Renaissance Center (General Motors World Headquarters), you know all the Chevrolet executives are watching.”

Joao Barbosa, the 2012 winner, will be joined by Christian Fittipaldi in the No. 5 Action Express Racing Corvette DP. After opening the 2014 season by winning the Rolex 24 At Daytona, the team looks to continue their success in Detroit and maintain their championship lead .

Other GM entries are the No. 31 Whelen Corvette DP of Boris Said and Eric Curran, and the No. 90 Spirit of Daytona Corvette DP of Richard Westbrooke and Michael Valiante .

Leading Ford’s assault is the all-time leader in North American sports car competition with 58 victories, Scott Pruett.  Pruett along with teammate Memo Rojas have taken home victories already in the 2014 season with wins at Sebring and Long Beach in the No. 01 Telcel Ford EcoBoost/Riley for Chip Ganassi Racing with Felix Sabates.  “It’s the classic battle, and it’s been that way since I first came here in 1986,” Pruett said. “Then it was Mustang vs. Camaro, now it’s Ford EcoBoost vs. Corvette … great for the fans, great for the team. Our rivalry is big at every event, but it’s even more heightened when we come to Detroit, because this is where it all began.”

Also fielding a Ford EcoBoost DP is Michael Shank Racing with Curb/Agajanian, the No. 60 for Ozz Negri and John Pew.

While the Chevy and Ford teams may be lacing up their gloves for the duel in Detroit, don’t count out the other Prototype manufacturers. Honda, Nissan and Mazda teams will be looking to upstage the American automakers on their home turf. “Detroit is a special place for the American brands, but this year has been a huge engine battle,” said Ryan Dalziel, who joins Scott Sharp in the Honda-powered No. 1 Extreme Speed Motorsports HPD ARX-03b. “Beating them at Mazda Raceway Laguna Seca was nice, but to beat them on their home turf would be added pleasure.”

Johannes van Overbeek and teammate Ed Brown are coming off a victory at Mazda Raceway in the No. 2 Tequila Patrón Honda HPD ARX-03b. While European endurance powerhouse OAK Racing will have Olivier Pla and Gustavo Yacaman in the No. 42 Nissan/Morgan. After making its move to the Prototype class in 2014, Mazda, with a pair of Mazda Diesels will see Tristan Nunez/Joel Miller and Syvlain Tremblay/Tom Long behind the wheel.

America’s “Big Three” will be further represented in the GTD class. Chrysler Corporation will have a Viper GT3-R fielded by Riley Motorsports, prepares to take on Porsche, Ferrari, Audi, BMW and Aston Martin.

A number of  TUDOR Championship regulars will be absent from this weekends event as testing begins Sunday for the 24hr of Le Mans. A host of drivers from the championship’s GT Le Mans (GTLM) class, which is not involved in the Belle Isle weekend, are expected to make the trip to Paris.

Corvette Racing’s two-car team of  Jan Magnussen, Antonio Garcia, Oliver Gavin and Tommy Milner will be awaiting the arrival of their one-off teammates Jordan Taylor and Richard Westbrook, who will depart Detroit for Paris on Saturday following the race at Belle Isles.

Other TUDOR Champion drivers expected to make the trans-Atlantic trip this weekend:

Two additional TUDOR Championship competitors from the Prototype Challenge class are expected to test at Le Mans. Tom Kimber-Smith will co-drive a Zytek Z11SN/Nissan in LMP2, while Sam Bird will race a Ferrari 458 Italia in LM GTE Am.