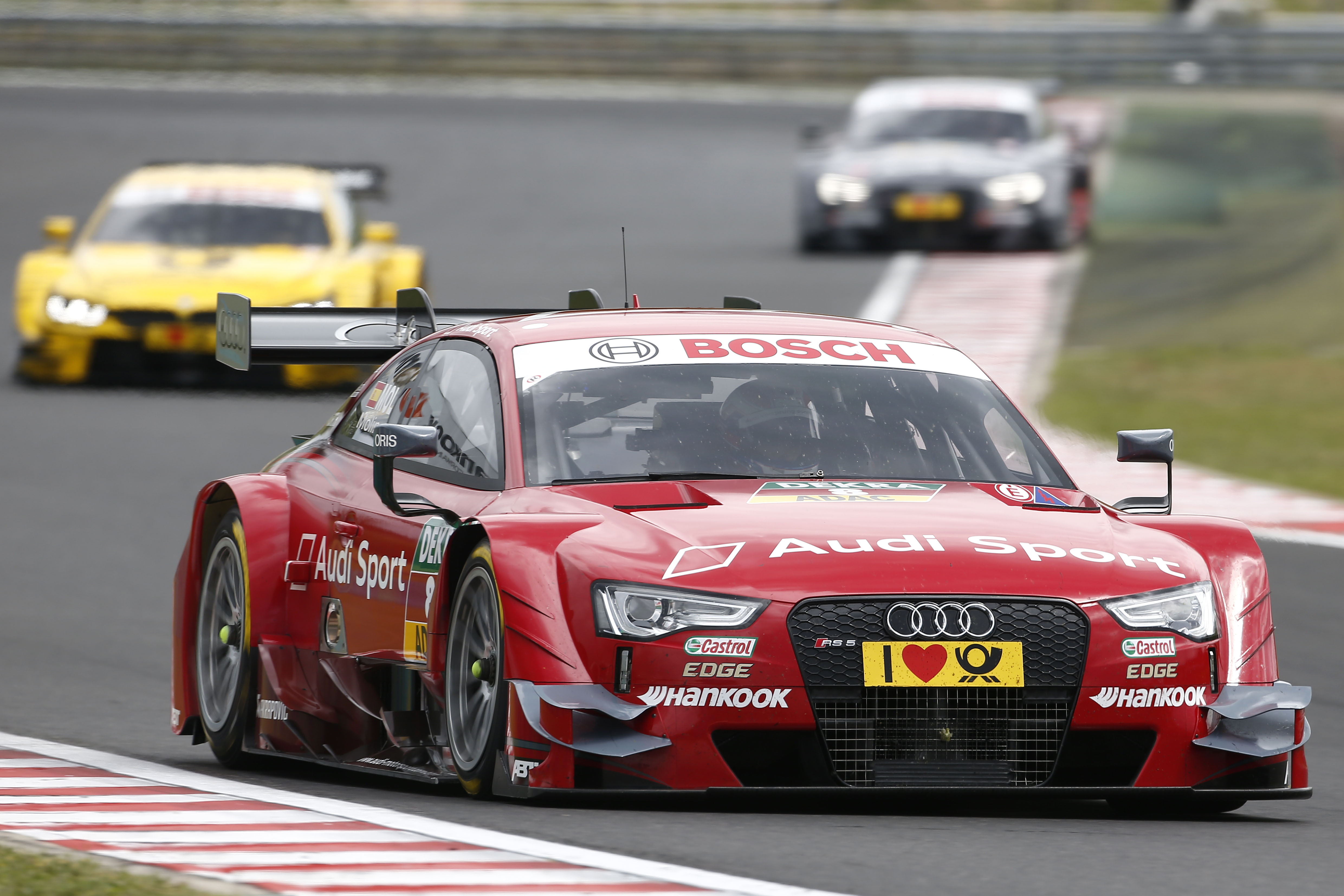 33,000 spectators, including a large number of employees of the Audi plant Győr, experienced a spectacular DTM weekend at the Hungaroring near Budapest and another strong showing by the Audi RS 5 DTM. Miguel Molina, on finishing the race as the runner-up, managed to clinch the best result in his DTM career so far. With six cars in the top ten Audi defended its lead in the manufacturers’ standings. The fastest lap in the race went to the RS 5 DTM as well. 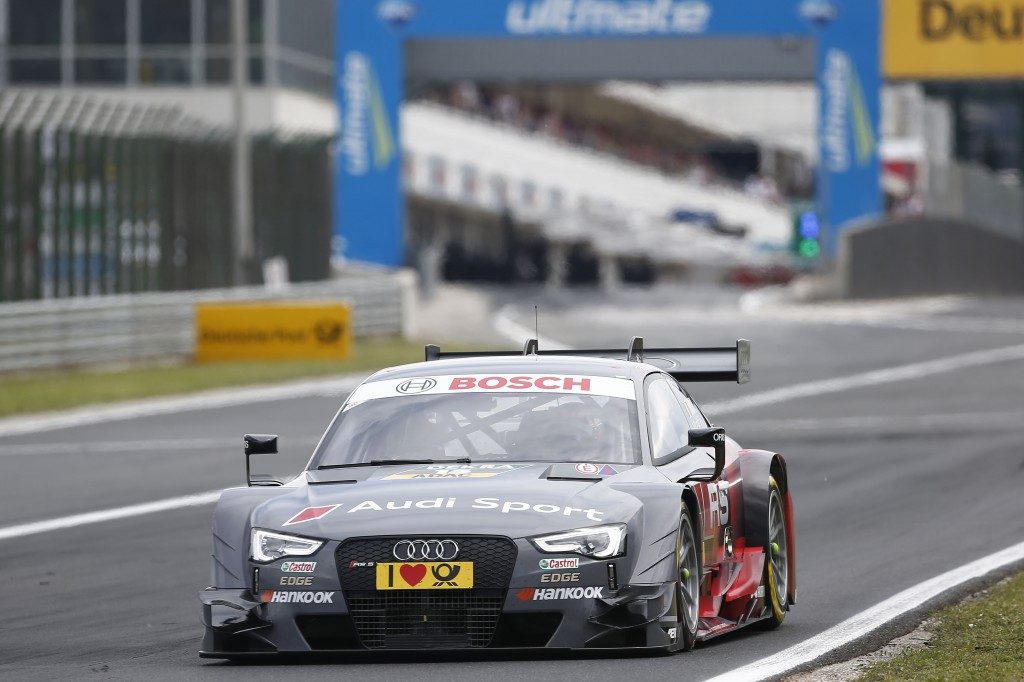 The man of the day from Audi’s perspective was Miguel Molina in the Audi Sport Audi RS 5 DTM of Audi Sport Team Abt Sportsline. The Spaniard, through no fault of his own, had been relegated to the rear-most position on the grid in the first DTM races. At the Hungaroring, Molina, as the best Audi driver, started the race from position three and finished in second place after 41 thrilling laps, despite having dropped to eighth place at the start. 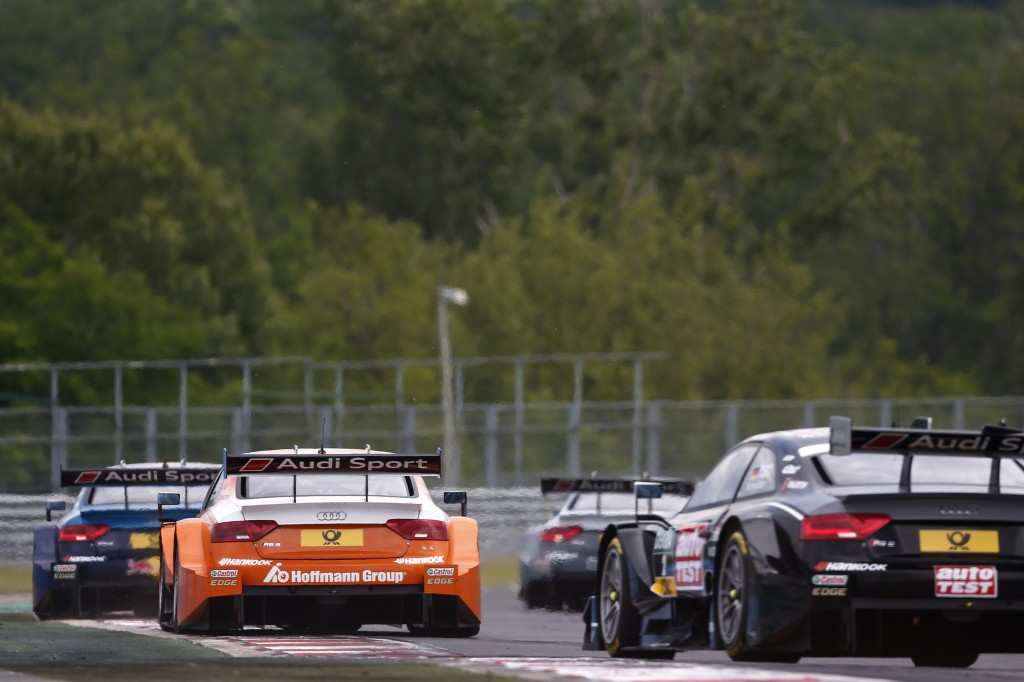 On the first lap, Molina recovered four positions. On lap 13, the Audi driver overtook the BMW of António Felix da Costa and immediately before his mandatory pit stop on lap 19 the BMW of ex-Formula 1 driver Timo Glock. Afterwards, ‘Magic’ Molina was the only driver in the field who was able to keep the pace of the subsequent winner Marco Wittmann.

“I’m very happy about this second place after all the misfortune I suffered in the first two races,” said the Spaniard. “I’d like to thank Audi Sport and Team Abt very much for giving me such a fantastic car. Unfortunately, the start wasn’t so great or else an even better result might have been possible. That I still managed to advance to second place is great and shows how strong the RS 5 DTM is.” 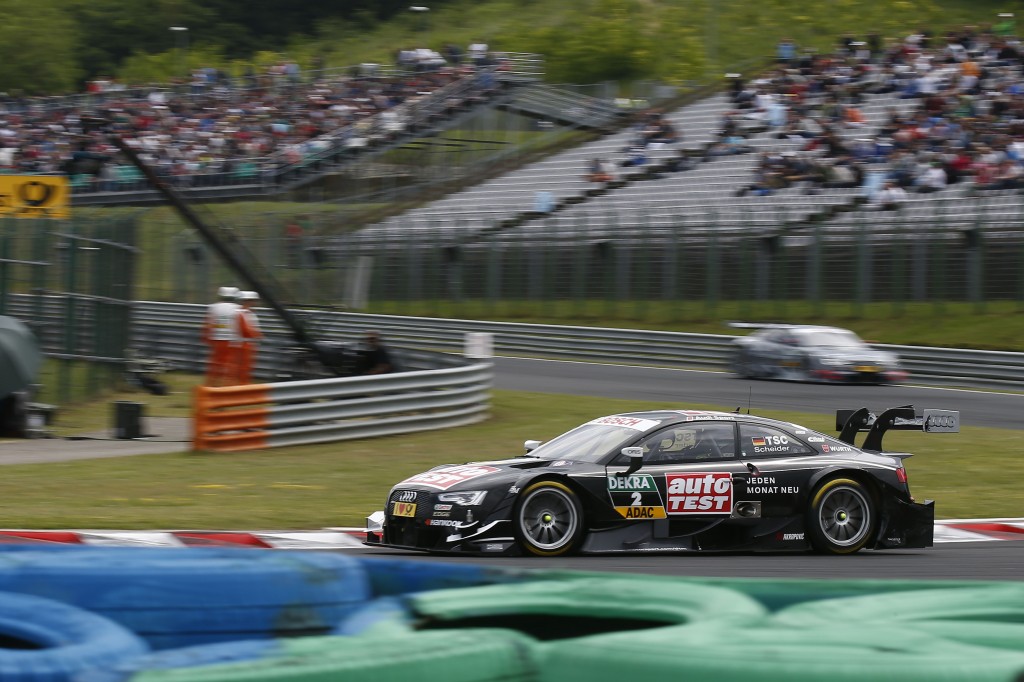 An impressive race was also driven by his team-mate Edoardo Mortara. The Italian, like Molina, had started on the softer option tires and, from position twelve on the grid, quickly advanced to fourth place. Following his change to standard tires, he fought a spectacular duel with Timo Glock which Mortara was able to decide in his favour. Only three laps before the end of the race, the Audi driver lost third place to Bruno Spengler who was one of the drivers to make up position by position on option tires in the second half of the race. 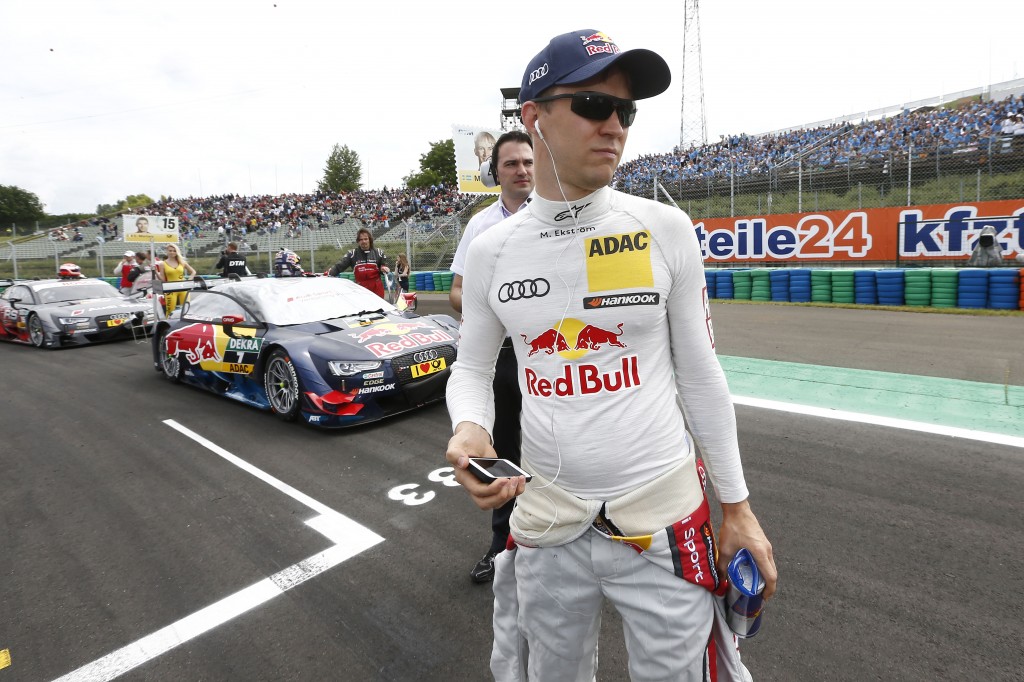 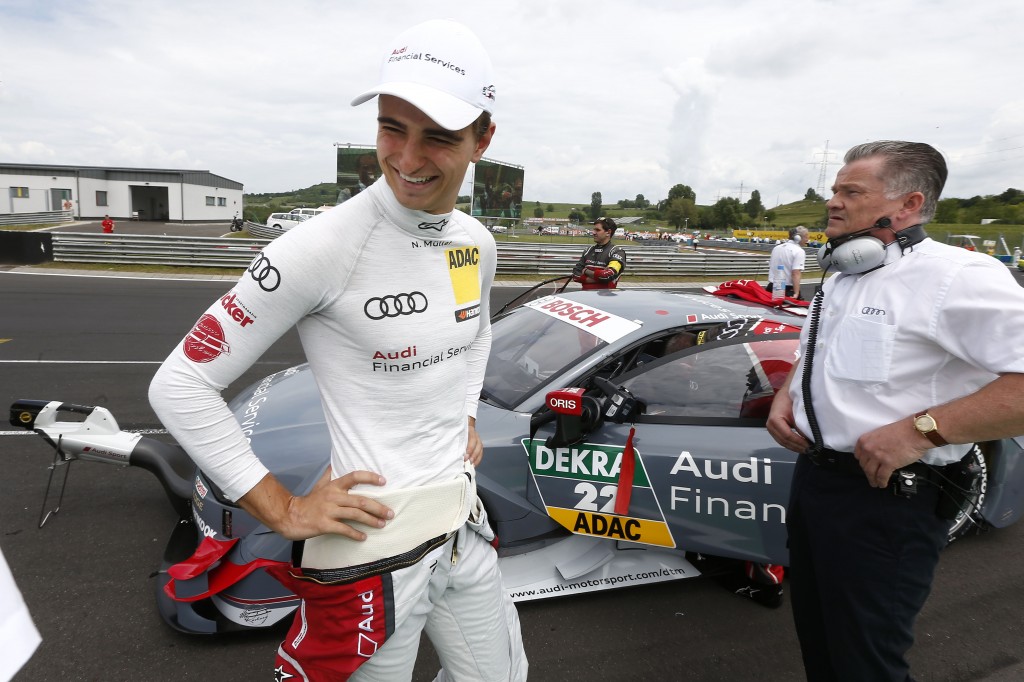 Nico Müller in the Audi Financial Services Audi RS 5 DTM just barely missed scoring his first points in the DTM. The young Swiss posted the fastest lap of the race by a large margin and was running in eighth place before being ‘turned around’ by Timo Glock on the last lap and dropping to twelfth place. 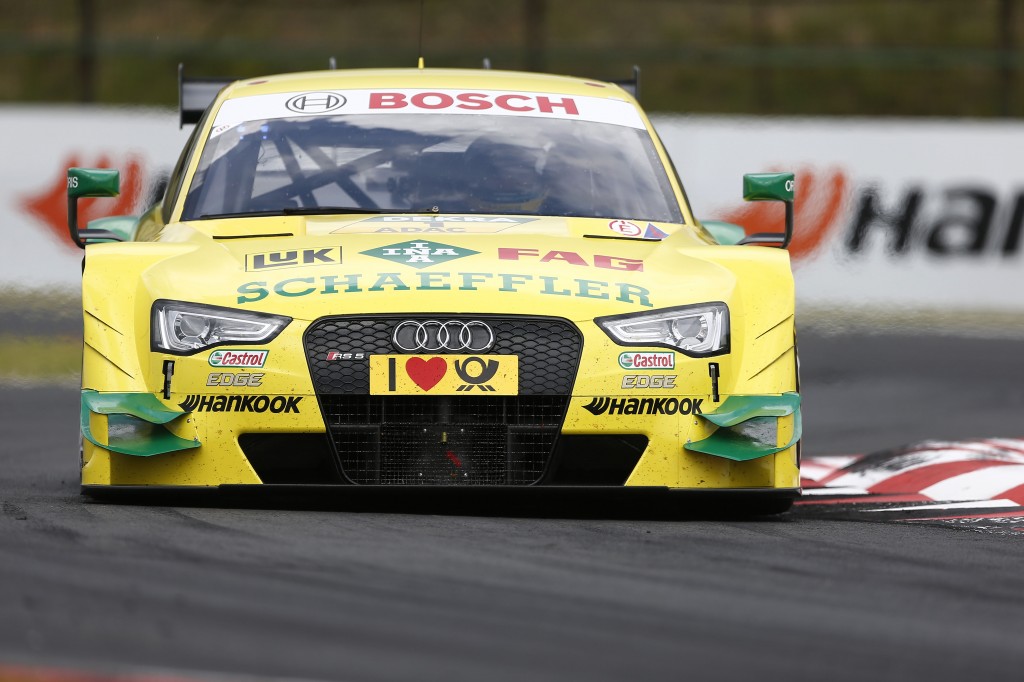 Timo Scheider was hit by a BMW just shortly after the start and had to park his AUTO TEST Audi RS 5 DTM on lap eleven with a damaged rear suspension. 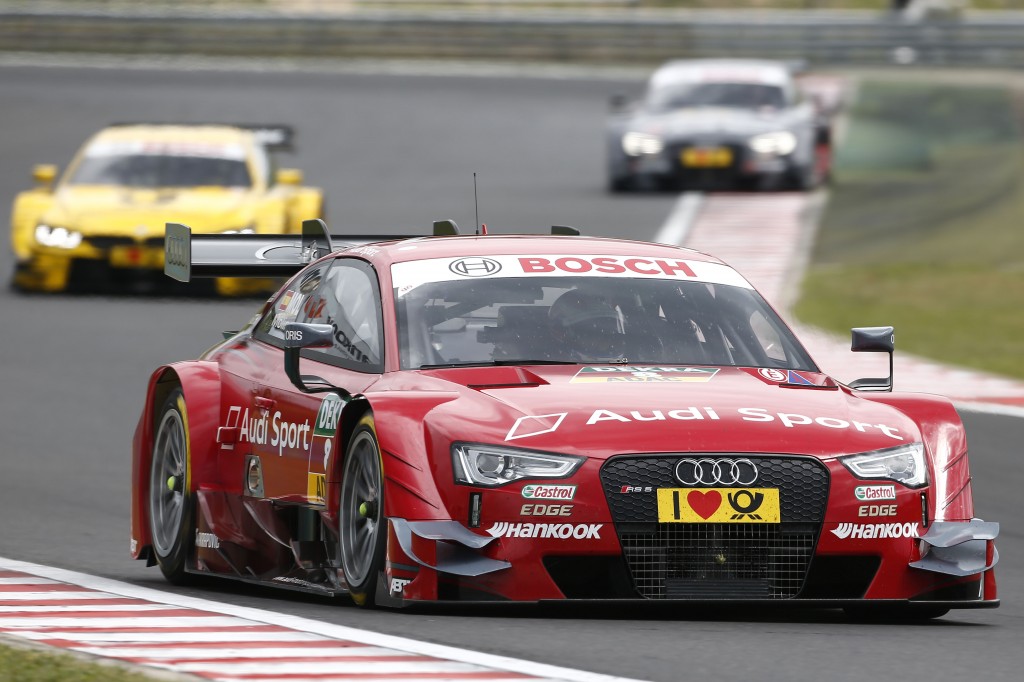 “I promised the employees of our plant in Györ a thrilling and action-packed race – and I think we kept our word,” said Dieter Gass, Head of DTM at Audi Sport. “There were some hot battles fought on track and we can definitely live with positions two, four and five, considering the qualifying session that was less than perfect for us. I’m particularly happy for Miguel (Molina), who shook off the misfortune from the first two races and deservingly clinched second place. He was the only one today who could have posed a danger to Marco Wittmann. Now we’re traveling to our home round in Nuremberg as the front runners – and are aiming to clinch our first victory of the season there.”

Dr. Wolfgang Ullrich (Head of Audi Motorsport): “My congratulations from the test day at Le Mans specifically go to Miguel Molina, but also to the entire Audi squad that converted a less than optimal qualifying session into a strong race result. For the DTM, this was a great comeback to Hungary. I think the spectators and the many Audi employees from the plant in Győr got ‘their money’s worth’ and will be pleased to return to the Hungaroring next year. And our drivers showed that overtaking is definitely possible there.”

Dieter Gass (Head of DTM): “We saw a thrilling DTM race with many position battles and a surprisingly large number of overtaking manoeuvres at the Hungaroring. Most of them were fair as well. For Audi, the results, compared to yesterday’s qualifying, are very good. We clinched positions two, four and five and have a total of six Audi cars in the top ten. Miguel (Molina), following his difficult start, clinched a brilliant podium result on finishing the race in second place – we can be pleased with that.”

Miguel Molina (Audi Sport Audi RS 5 DTM), 2nd place
Tires: option/standard
“Obviously, this second place feels very good now, following the first two races. We all deserve this result. We’re well sorted, are on a high level and are going to battle hard for victory in the next races too.”

Edoardo Mortara (Audi Sport Audi RS 5 DTM), 4th place
Tires: option/standard
“It was both a difficult and a good race. I advanced from twelfth to fourth place, that’s a nice result. I’m not proud of my action with Timo (Glock) – I was very rough on him. I can certainly understand that he’s upset. But when you start from the rear you’ve got to take a risk. You’ve got to fight for your result.”

Adrien Tambay (Playboy Audi RS 5 DTM), 5th place
Tires: standard/option
“The beginning of the race on standard tires was difficult. I had to let a few cars that were running on option tires pass, which was hard for me. I subsequently gave my best. It was a great fight. I’m happy that I was able to overtake a few drivers towards the end. Fifth place is simply brilliant.”

Jamie Green (Hoffmann Group Audi RS 5 DTM), 7th place
Tires: standard/option
“These races with varying tire strategies feel strange. For a long time, you hardly see any other drivers and overtake only few of them. And then, on the final lap, I overtook an amazing three cars. My aim was to finish the race and to score points – and I managed to do that. I’m hoping for us to be able to build on today’s result.”

Mattias Ekström (Red Bull Audi RS 5 DTM), 9th place
Tires: standard/option
“It was a bit disappointing. I felt that from the beginning to the end we weren’t quick enough. In addition, my car was difficult to drive. We’re hoping for better fortune in the next race.”

Mike Rockenfeller (Schaeffler Audi RS 5 DTM), 10th place
Tires: option/standard
“Tenth place is a disappointment. The whole weekend was disappointing. I wanted to drive a different set-up here. That didn’t work out. It doesn’t suit my style of driving. We learned our lesson from this. We’re going to look ahead now and pursue the approach we used in the first races and last year.”

Nico Müller (Audi Financial Services RS 5 DTM), 12th place
Tires: standard/option
“Being bumped out on the final lap was frustrating. Timo (Glock) knew perfectly well that I was running on option tires and was three seconds faster per lap. It’s painful to lose such good points. But I’m taking the positive aspects with me. I was running very fast on option tires and am going to try and profit from that in the future.”

Timo Scheider (AUTO TEST Audi RS 5 DTM), retirement
Tires: option
“The starting phase was a bit unfortunate for me. I had one or two incidents of body contact. According to the info I received, Gary Paffett, on spinning, hit my rear wing with his. As a result, my rear wing had a hole in it and a carbon part was hanging downward. Furthermore, there was an impact on the left rear axle which damaged the suspension. At that point, I realised that it would become a difficult race with a crooked steering wheel right on lap one. After ten laps, I had to park the car with a broken suspension.”