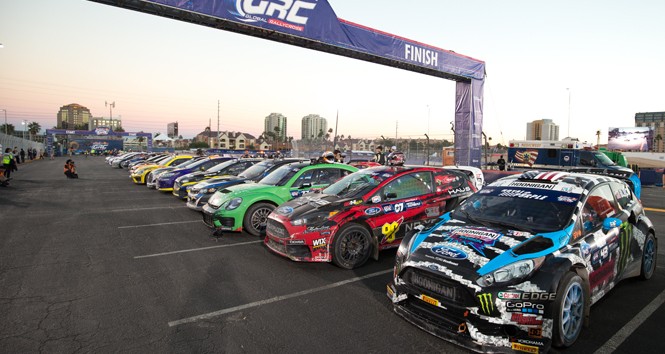 Red Bull Global Rallycross drivers will have one more step to conquer when chasing down coveted lane choice in the 2015 season: a second round of qualifying.

Knockout qualifying isn’t an unfamiliar format in motorsports—every major racing series from stock cars to Formula 1 has a multiple-round procedure to determine spaces on the grid. The idea is to put on a better show for the fans, whether they’re watching on site or on broadcast, by encouraging drivers to post consistently fast laps. The idea will come to Red Bull GRC for the first time this year as a way to liven up the first day of race action for fans before the heats.

“We revamped our qualifying program because we really wanted to make qualifying a part of the show, not just a function of determining starting positions,” said Joey Mancari, Red Bull GRC’s vice president of competition. “So taking cues from different forms of racing that have started with knockout forms of qualifying, like IndyCar, Formula 1, and NASCAR, we developed a knockout-style qualifying of our own.

The top six starting positions will be determined solely by times set in the second round of qualifying, while seventh and below will be set by first-round times regardless of group number. Qualifying groups will be determined by lap times in the final practice session.

In the event that qualifying does not take place, the starting order will revert to driver’s championship points, with a random draw to determine the starting positions at the back of the field for any drivers without points.

The 2015 Red Bull Global Rallycross season opens on May 30-31 with a new event at the Bahia Mar Resort in Fort Lauderdale, FL. Tickets can be purchased online at http://www.redbullglobalrallycross.com/tickets.