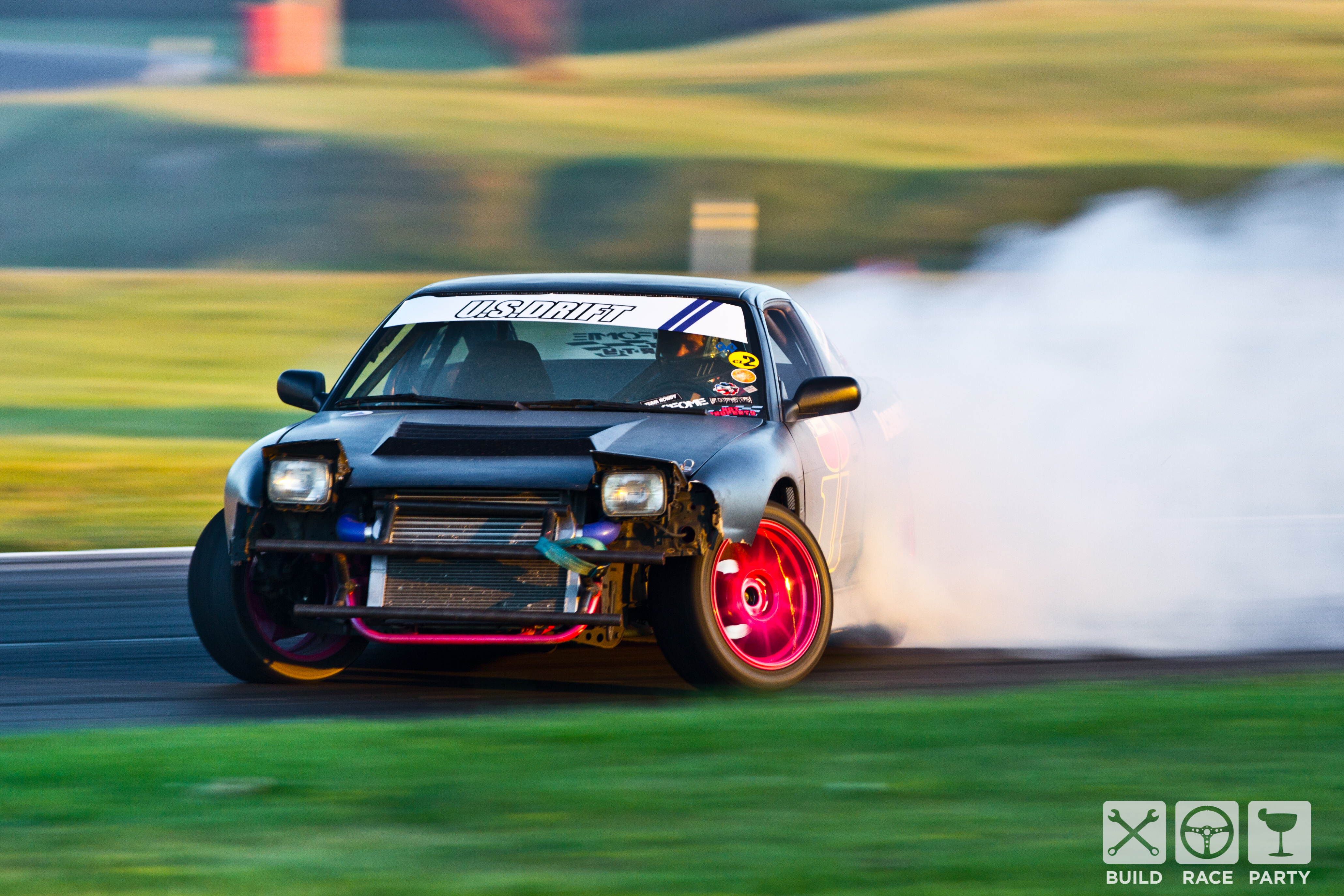 I went down to Summit Point Raceway this past weekend for National Auto Sport Association(NASA)’s Hyper Fest.  In particular, I went down for the Rally Sprint NASA Rally Sport(NRS) was running on Sunday.  That didn’t stop me, however, from heading down first thing Saturday to get the full Hyper Fest experience.  After arriving, and getting signed in I spent the first hour and a half trying to actually find the ralliers.  The “map” left a bit to be desired, but, after going pretty much everywhere they weren’t I managed to find them.  If you’ve ever been to Summit Point, you’ll know there are several  fantastic circuits and a whole lot of area to cover between them.  The ralliers were nestled behind a quiet knoll with a wonderfully tight and winding dirt track that was just about 1.8 miles long.  On Saturday the drivers were giving rally rides and familiarizing themselves with the stage.

After I found the NRS group I was enlisted to help sell tickets for the first bit of the day, in exchange for camping rights that evening.  After selling every ticket available in a short amount of time, I headed back to the track to see the operation running at full tilt.  Several cars would run the track on roughly minute intervals with passengers.  But, like most rallies, there were abrupt halts.  Broken axles seemed to be the order of the day for many of the drivers, as well as a case of a wheel breaking off the studs.  The drivers definitely weren’t taking it easy on stage and were giving everything they could for the sake of the enthusiasts in the co-driver seats.  When one car would run into issues, another would take its place.  Cars were fixed throughout the day in order to keep everything running. 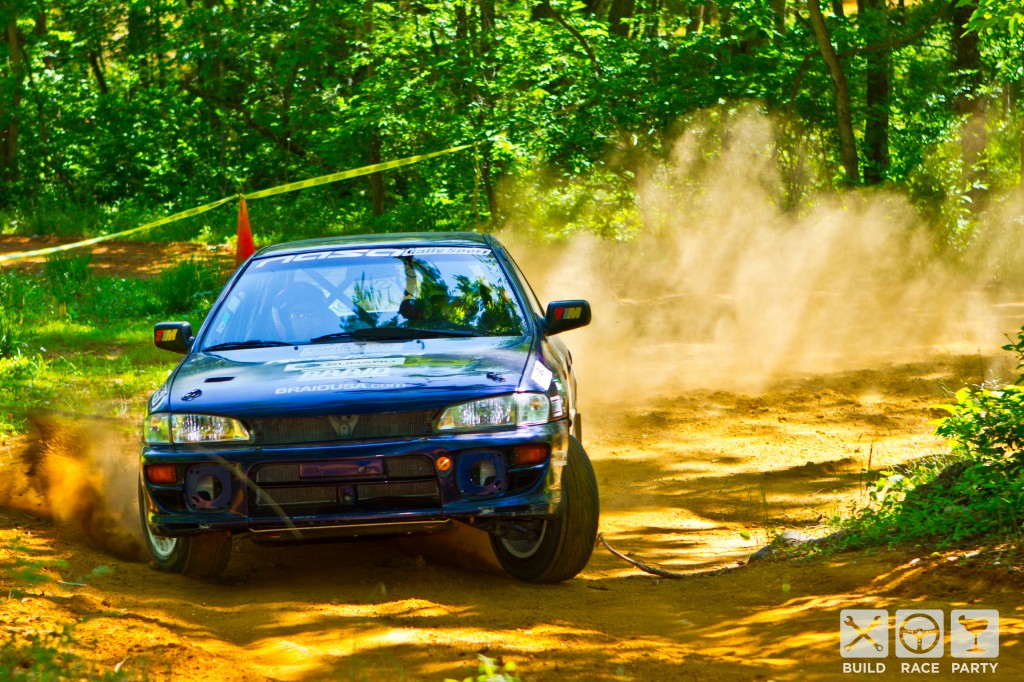 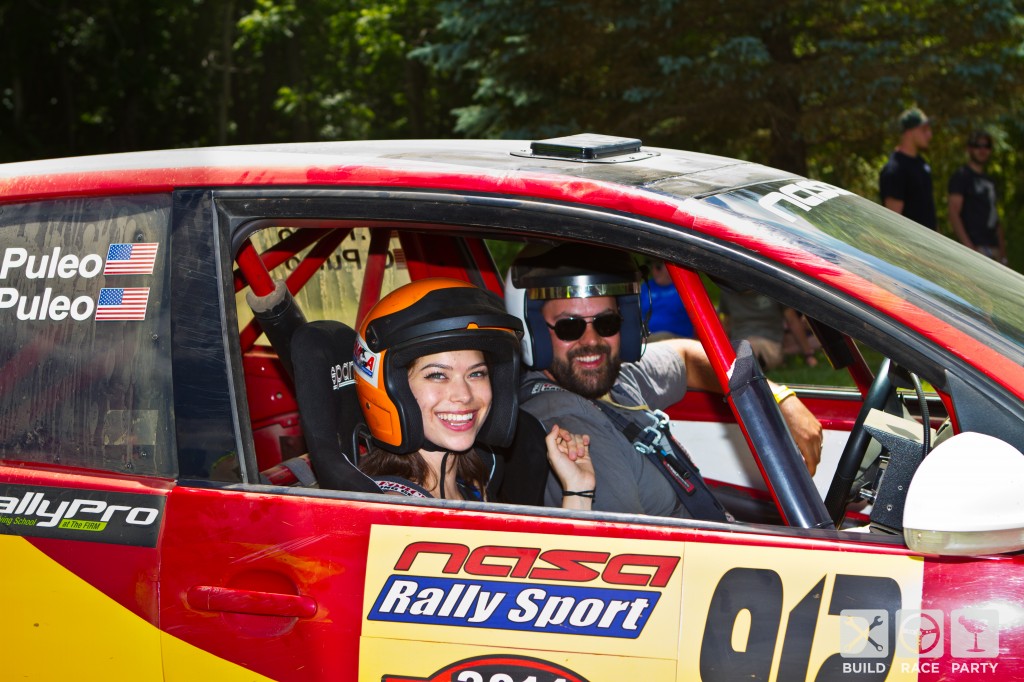 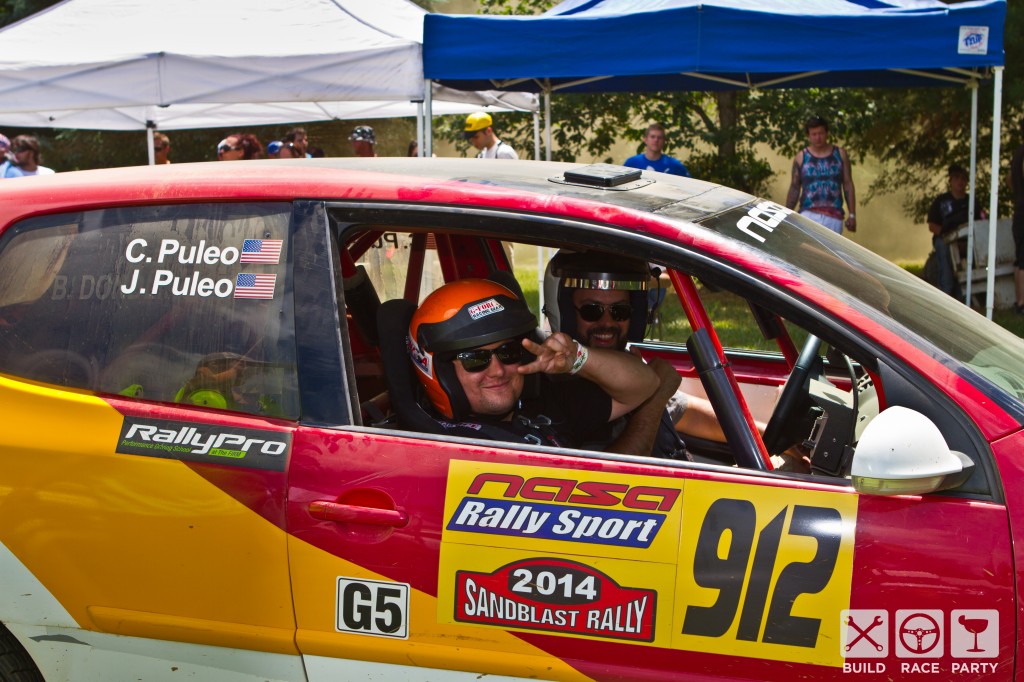 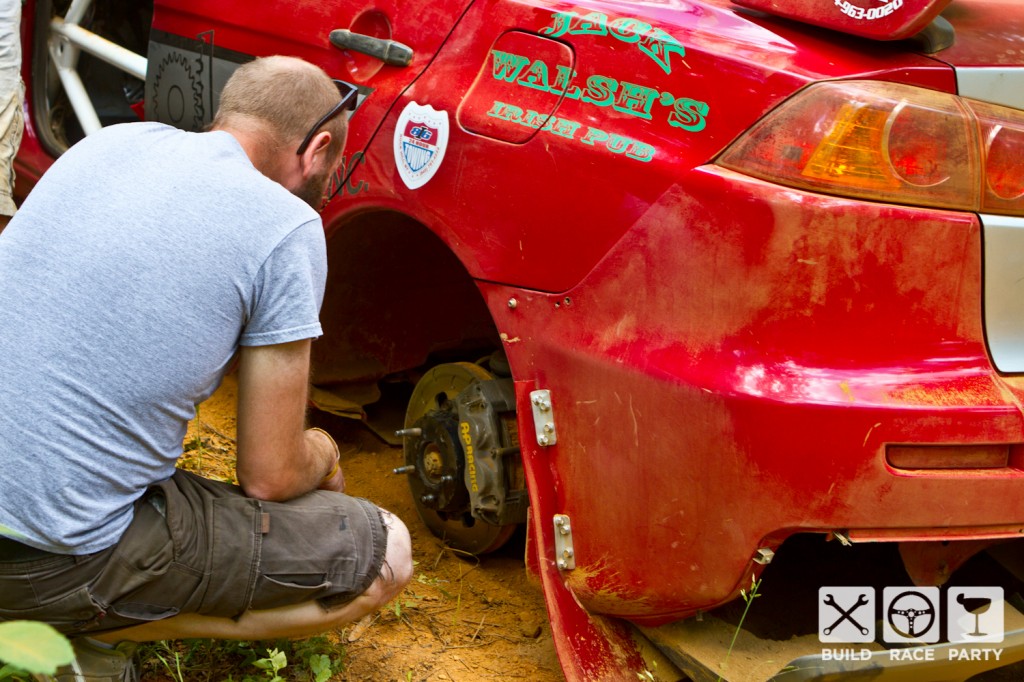 Of course, not all of the cars were running into problems.  A, mostly stock, Civic Si driven by Michael Gebrian somehow managed to run the entire day (and the next) without issue. 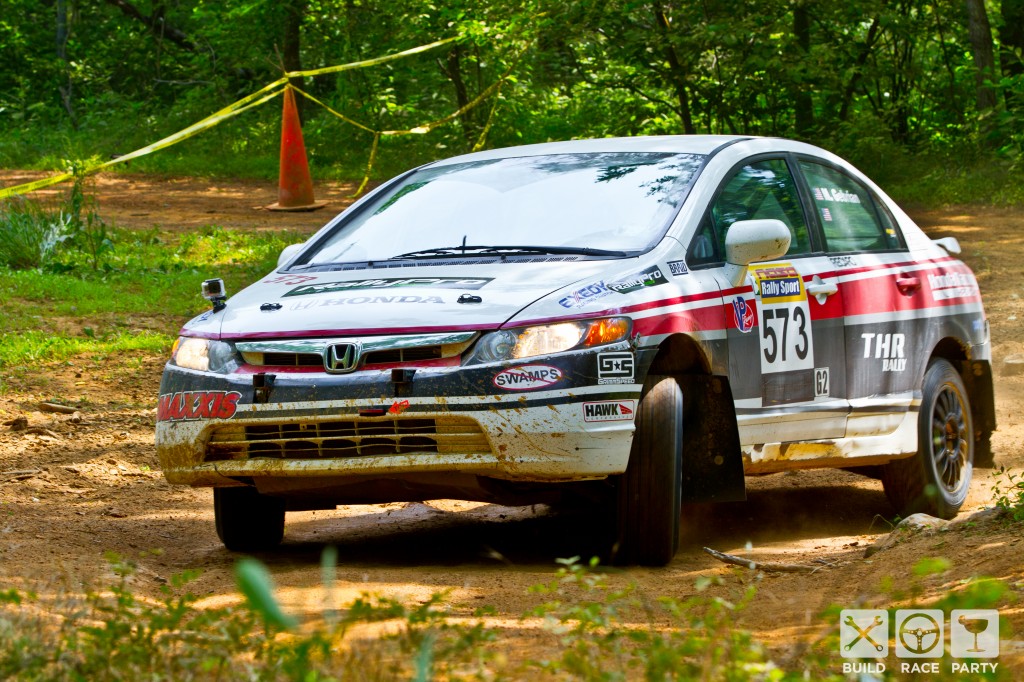 And before all you “that’s not a rally car” guys start rolling your eyes,  the civic also took second overall, just 11 seconds behind Eric Wages’ very impressive Subaru WRX.  Eric and his co-driver Cameron Carr ran into issues early on, when an initial setup issue resulted in damage to the rear axle and a bent caliper.  A 250 mile trip later, the two were able to get the spare brackets they needed to reassemble the car for the sprint Sunday Morning.    Their dedication, and the dedication of all the other drivers who fought through issues Saturday showed how dedicated they were to giving the fans rides they wouldn’t soon forget.  At the end of the day Saturday, well over 120 rides were given.  A feat that isn’t matched anywhere else in the country.

When the day quieted down, I went to the main track to watch the US Drift finals.  It was a great event with 14 drivers running in tandem.  Two other qualifiers could not start due to car issues.

Matt Predmore was putting in a solid run  but on the exit of the last corner he ran wide and hit a tire barrier.   He was fine, but his car was no longer fit to compete. 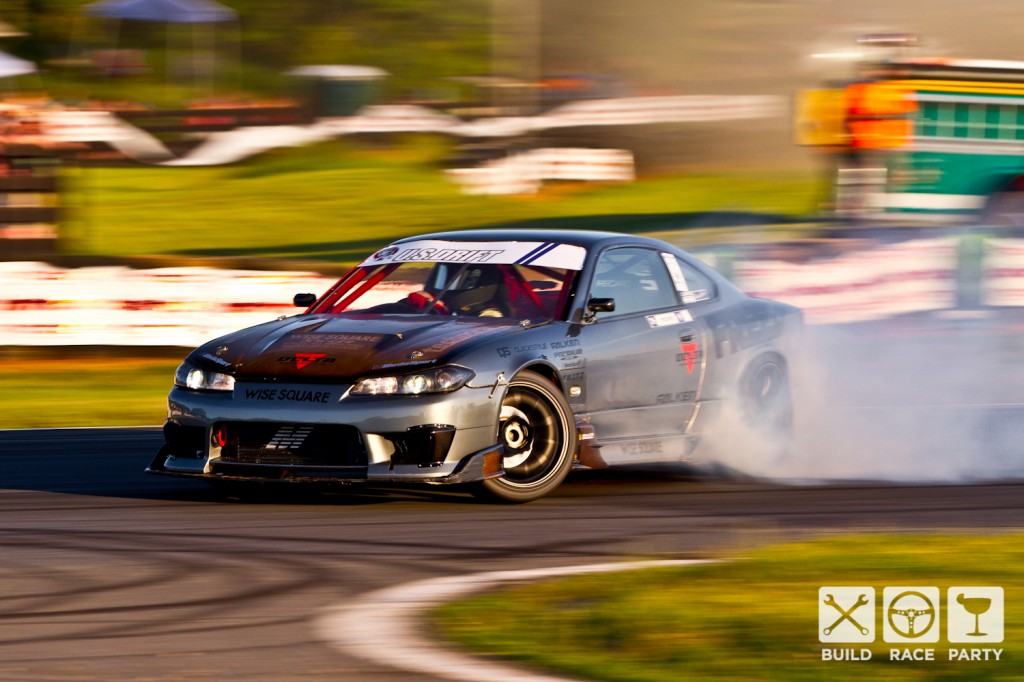 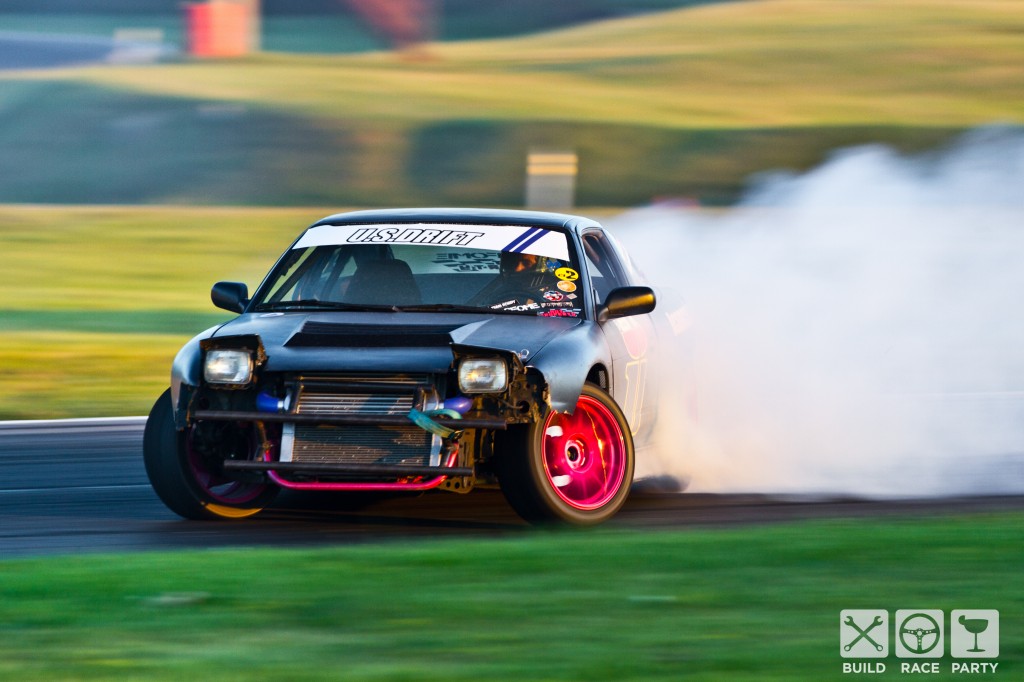 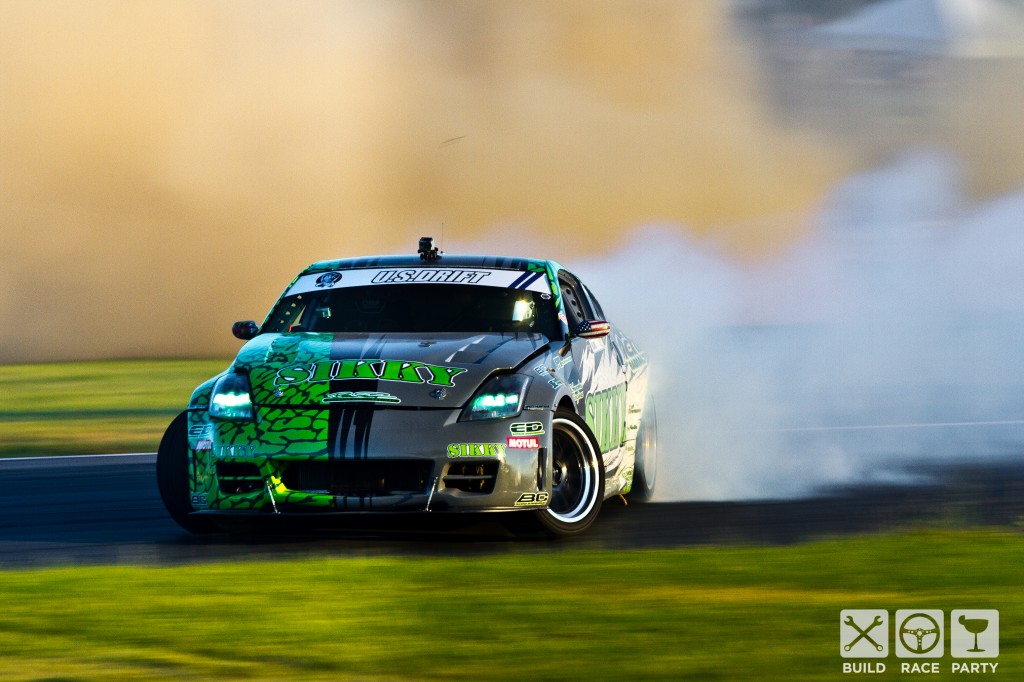 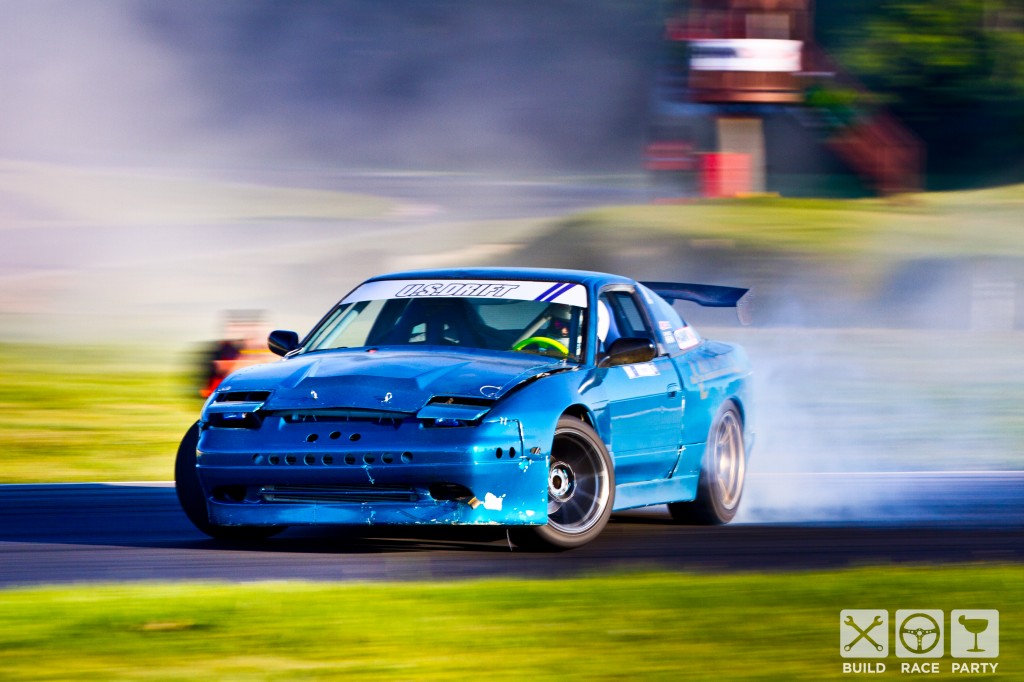 That evening, I was back with the ralliers sitting around a fire burning things and talking rally.  The only times it seems anymore that I spend around fires is with my “car” friends.  Rally camp outs or the yearly weekend trip with my Subaru Cretins.  It may not seem like much but it feels like a solidifying act that shifts my role from “watching” the rally community as a photographer and actually becoming part it. 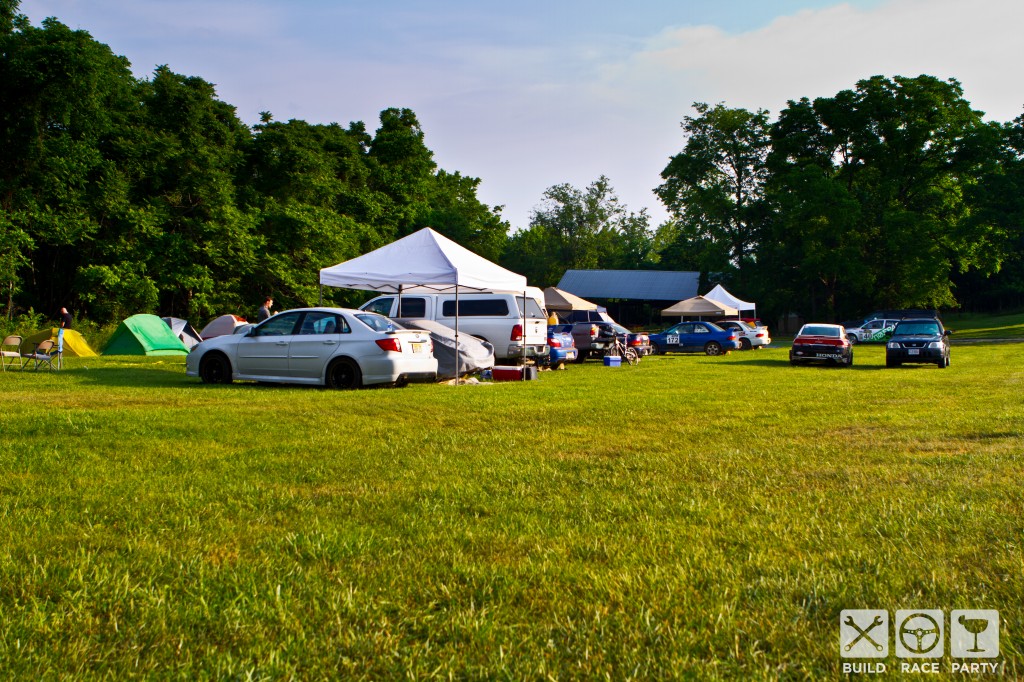 The next morning found a quiet scramble as a few more cars rolled in while we got ready for 3 runs of 3 laps each.  But before we got started, Eric gave me two laps in the co-driver seat of his WRX around the course.  It was the first time I’d been in a rally car, at speed or otherwise, I expected it to be similar to a Roller Coaster, especially over the parts of the stage that undulated some 2-3 feet.  And I actually HATE Roller Coasters, fortunately what I experienced was something very different, it wasn’t the stomach turning and jarring motions of a roller coaster but considerably smoother and controlled, even under heavy breaking.  So now I need to do is find somebody that needs a co-driver for a rally or two next season.

Jack and Helga Lewis in their 911. 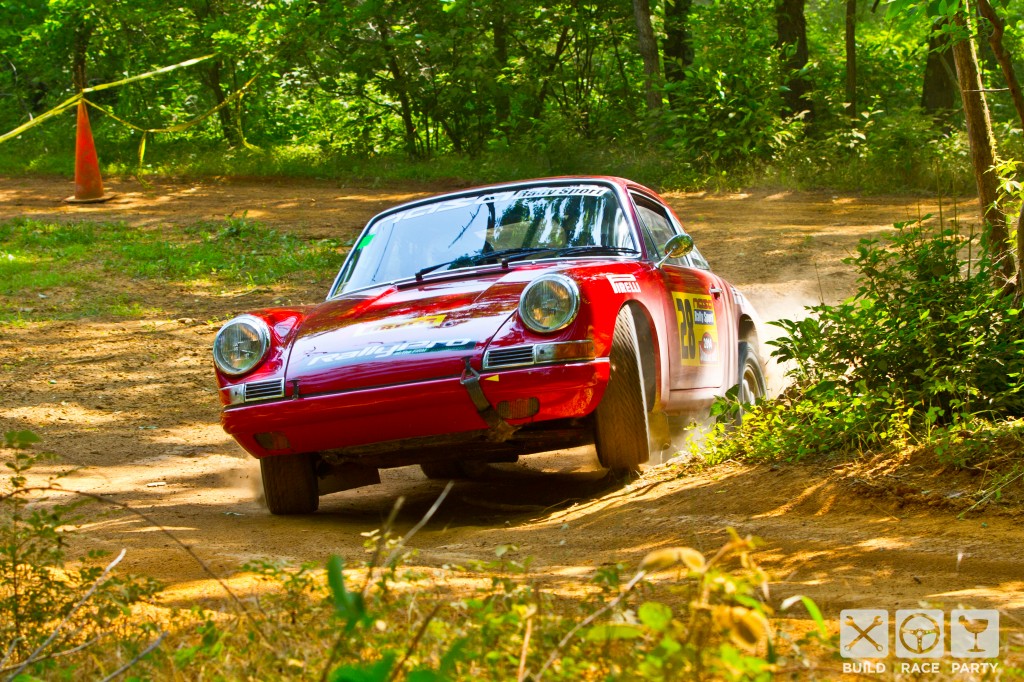 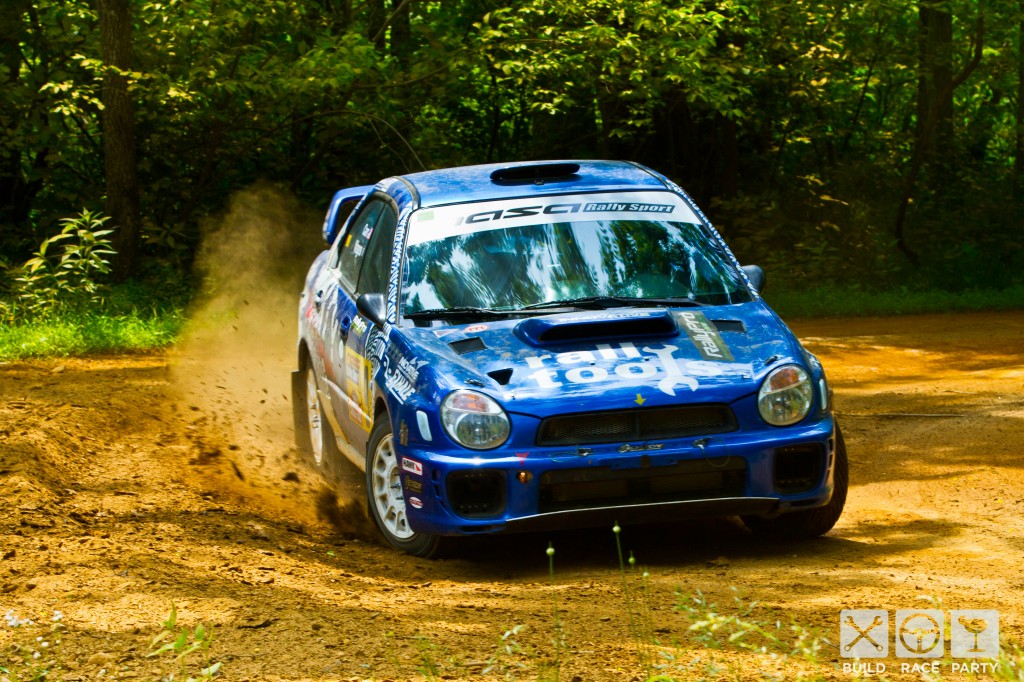 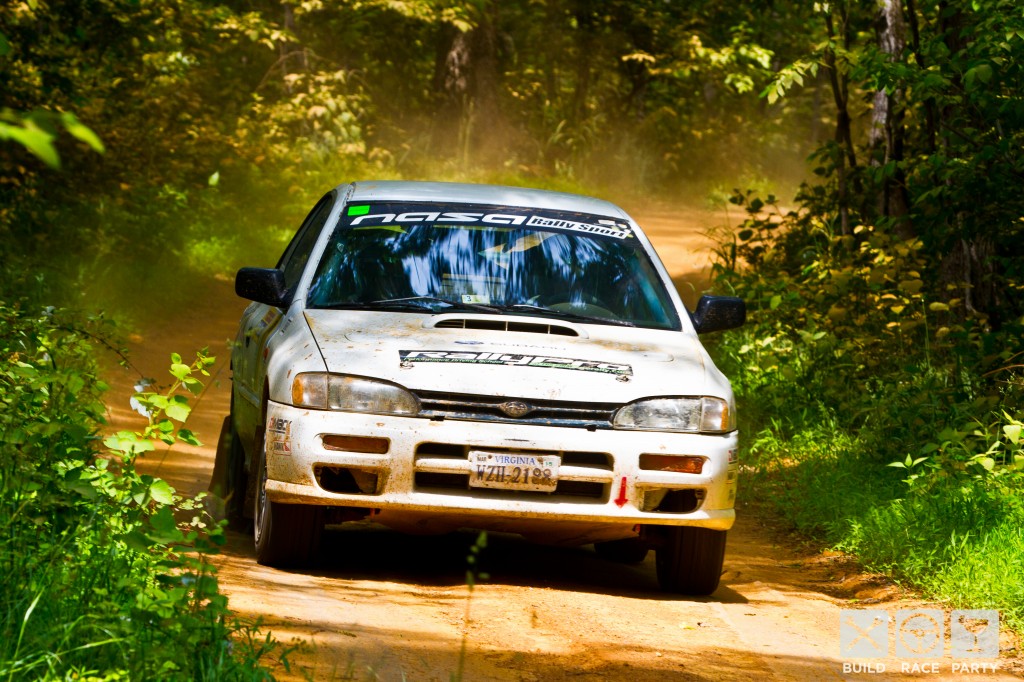 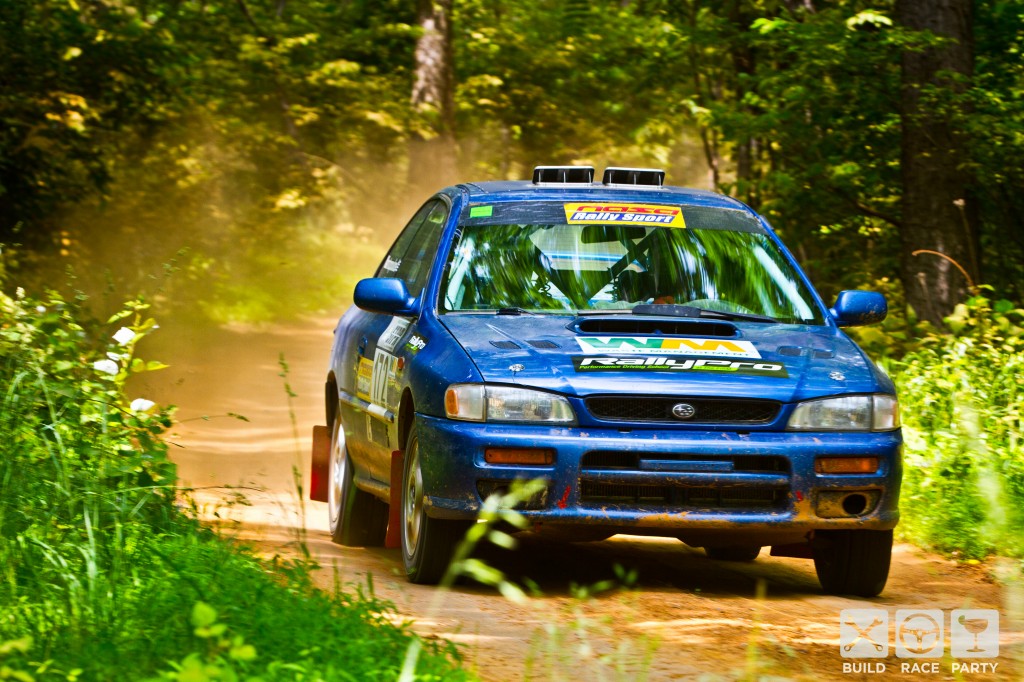 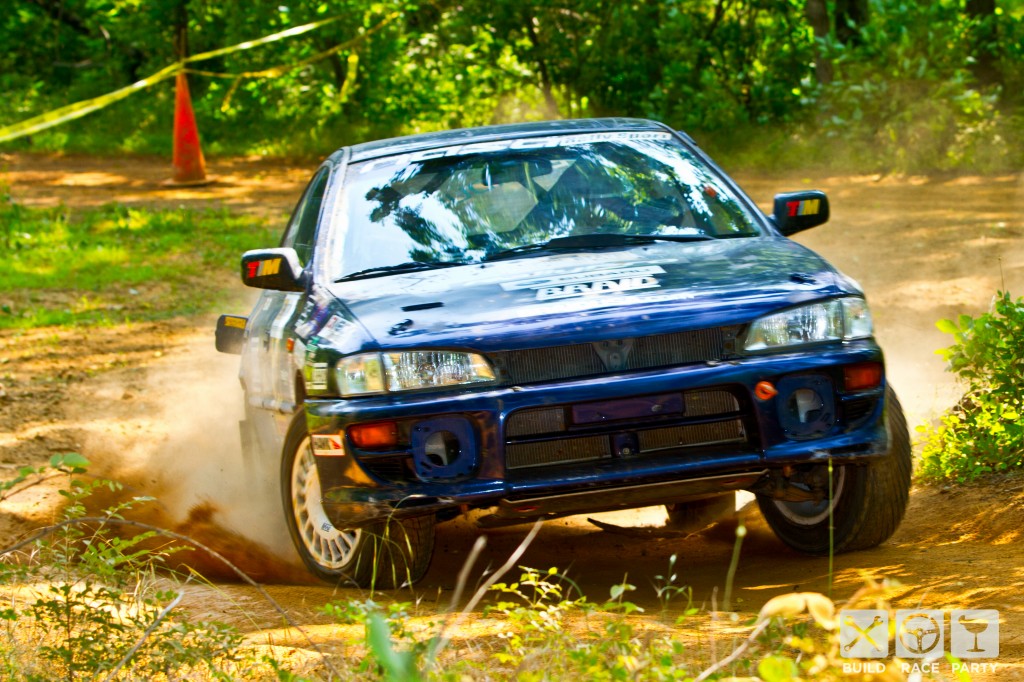 Both days the drivers needed to deal with some local wildlife, fully intent on getting run over, continuously. 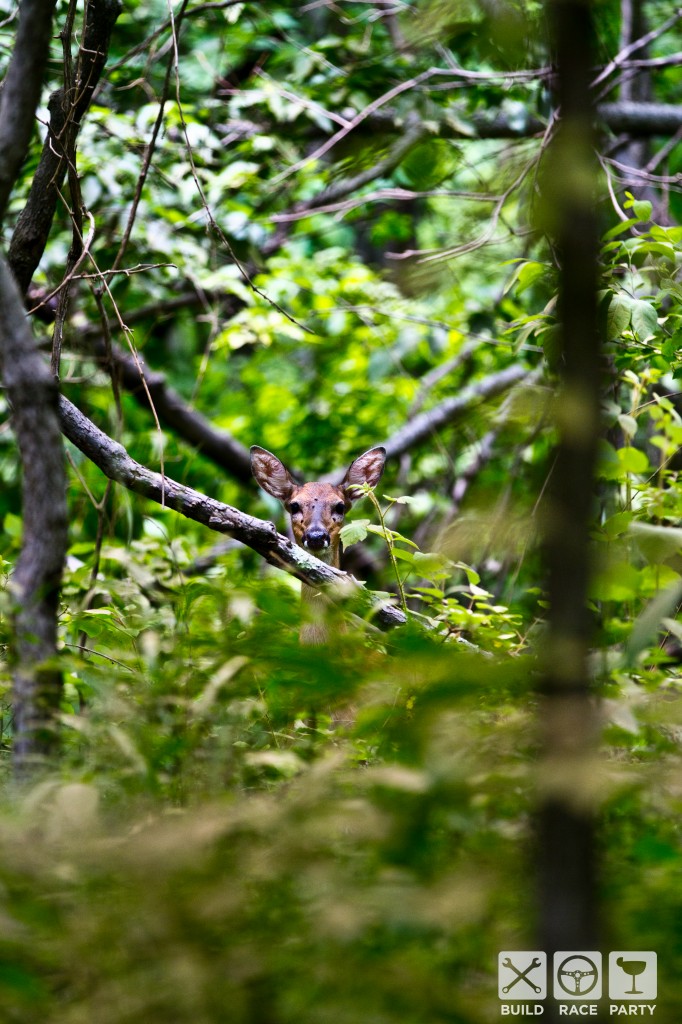 Before the final run we all took a lunch and cool down break.  During that time Anders Green took the time to interview a few of the drivers to see how their event was going.

Eric Wages and Cameron Carr being interviewed by Anders Green 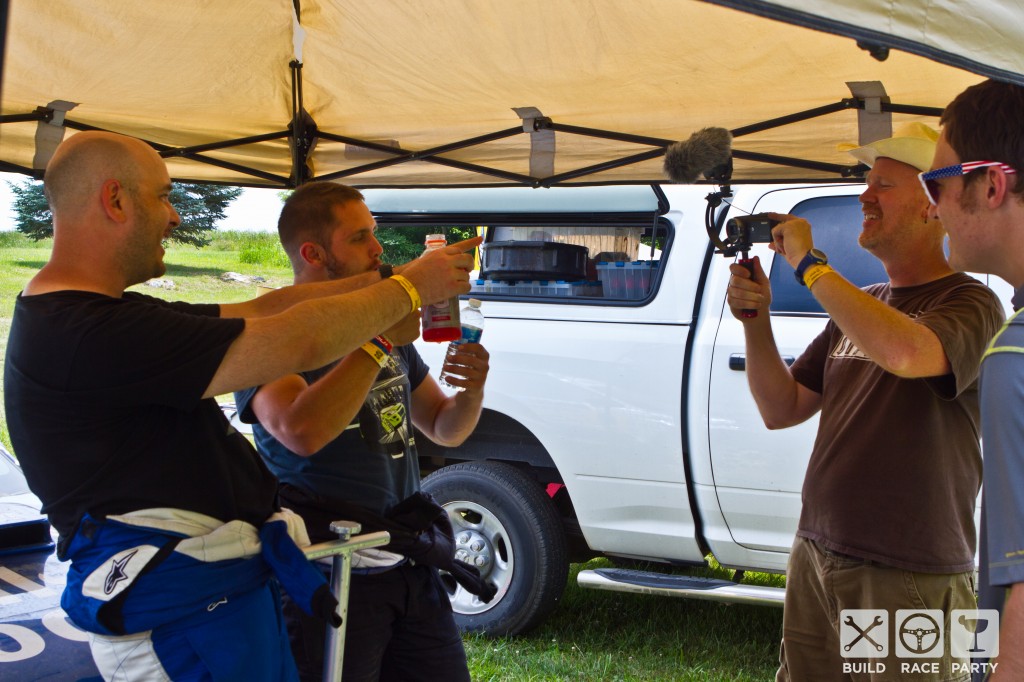 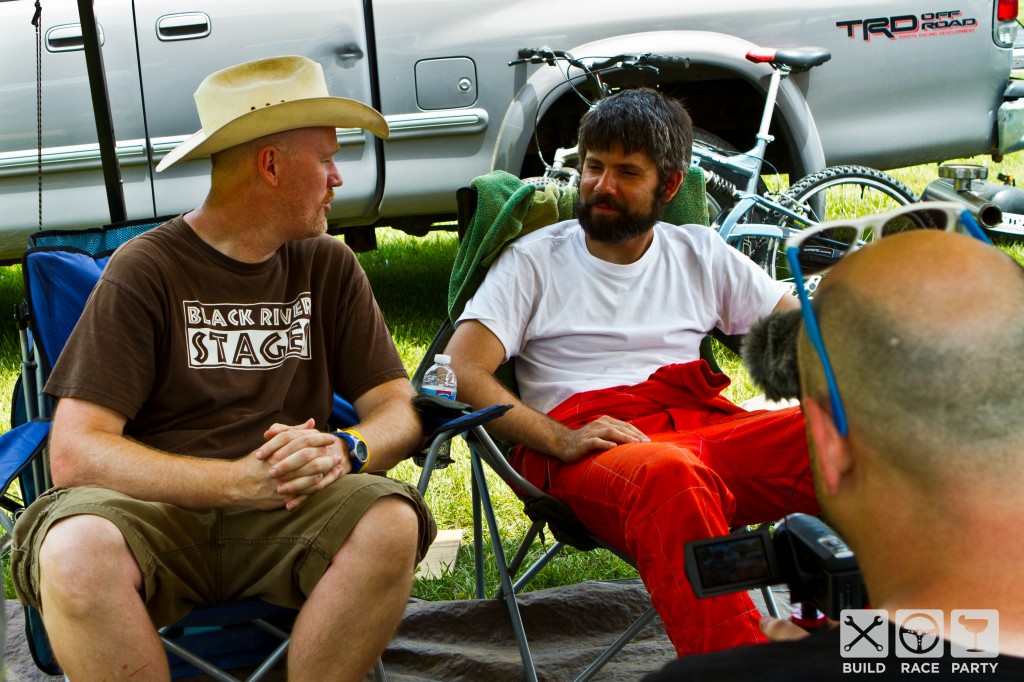 The final stage started and the teams gave their all.

Jim Kelly in his Ford Escort 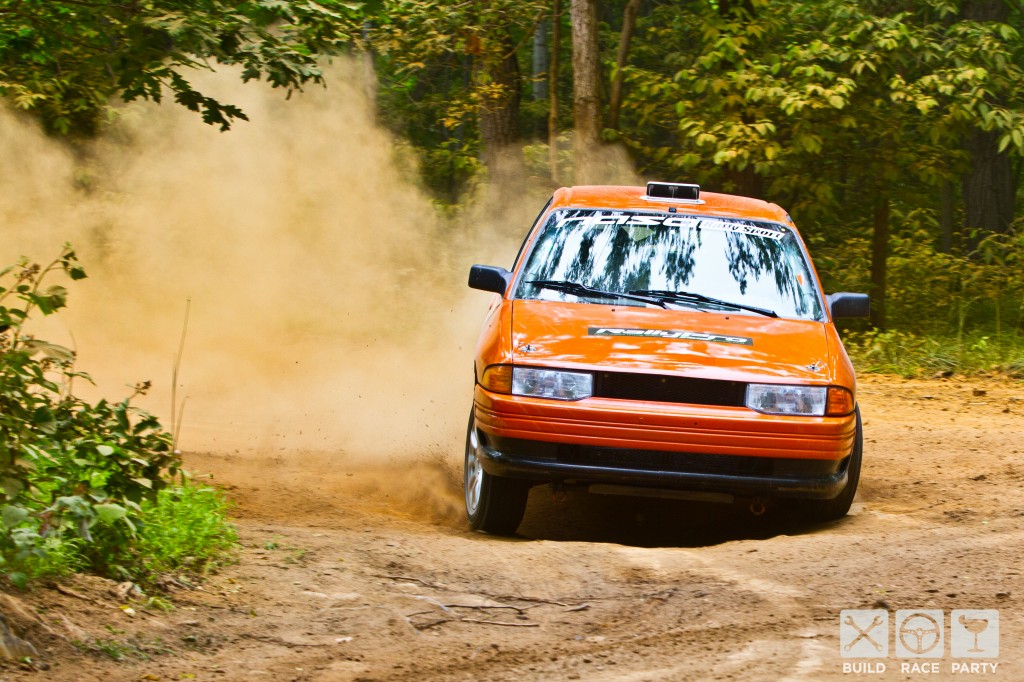 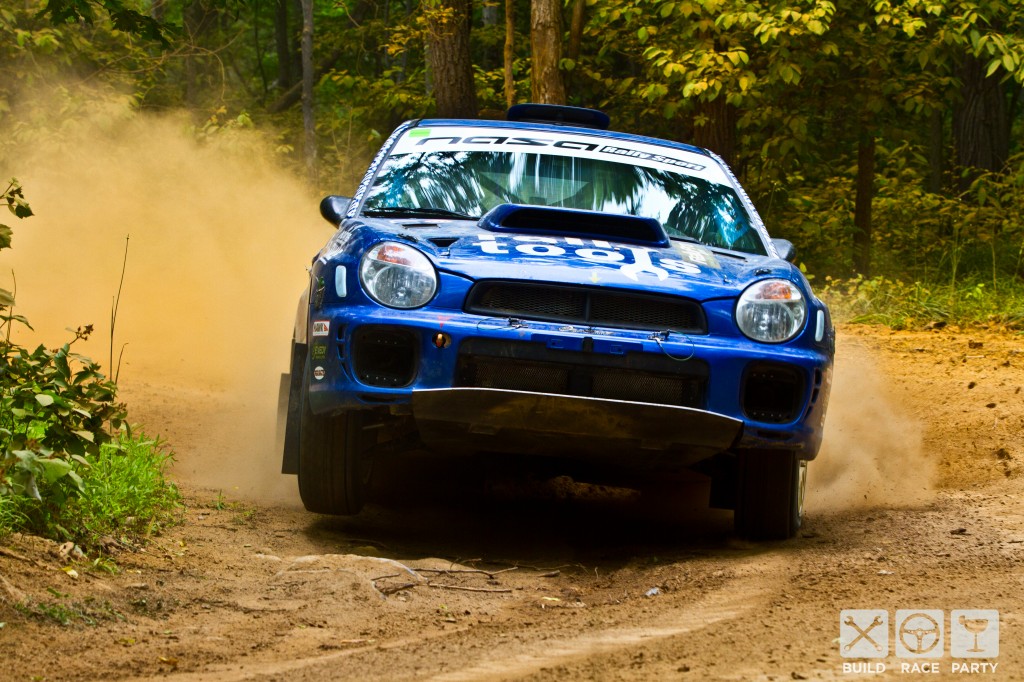 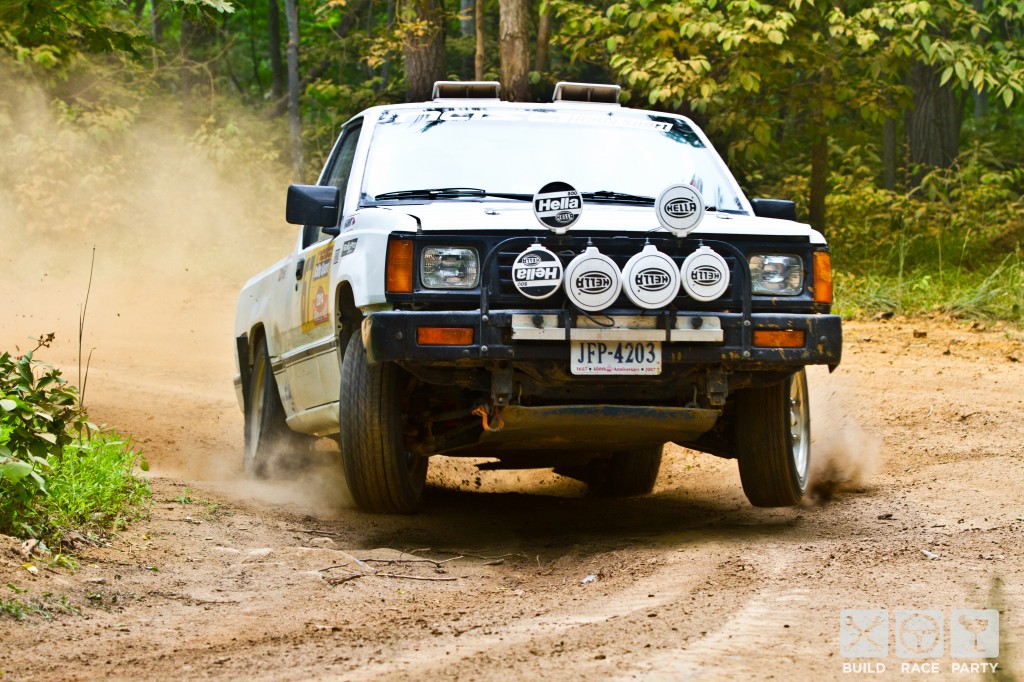 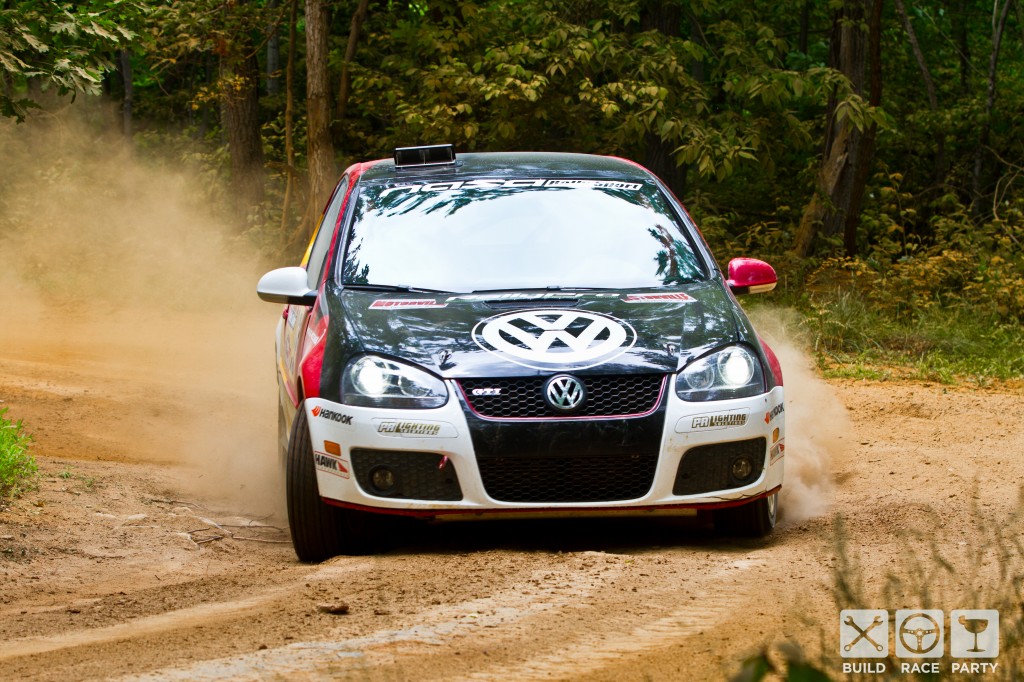 Torren and Aris ran all three laps with a flat tire. 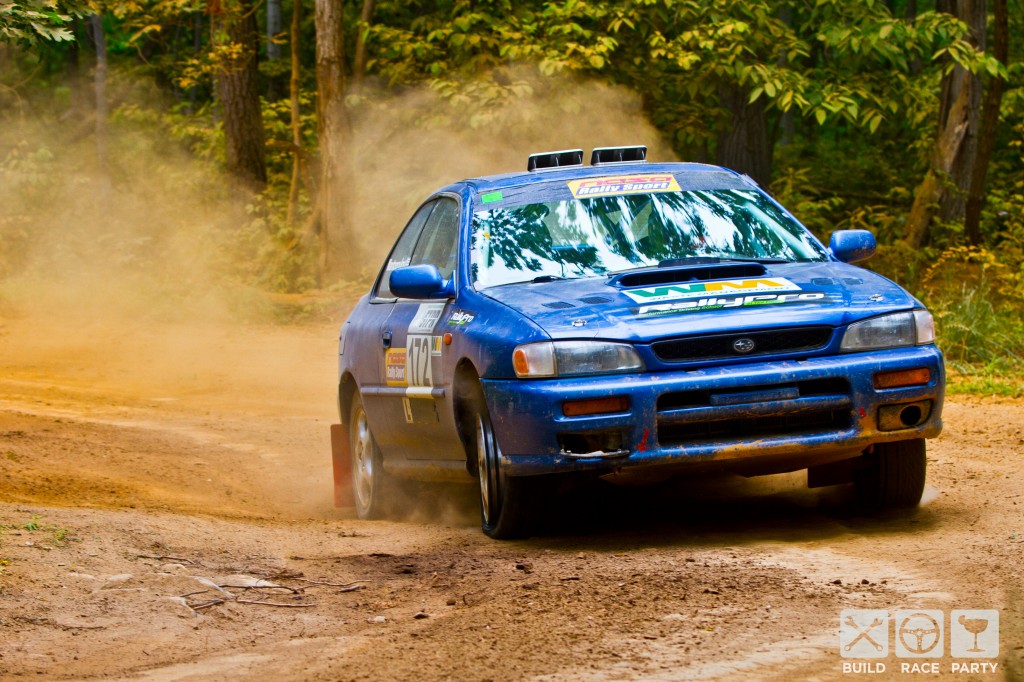 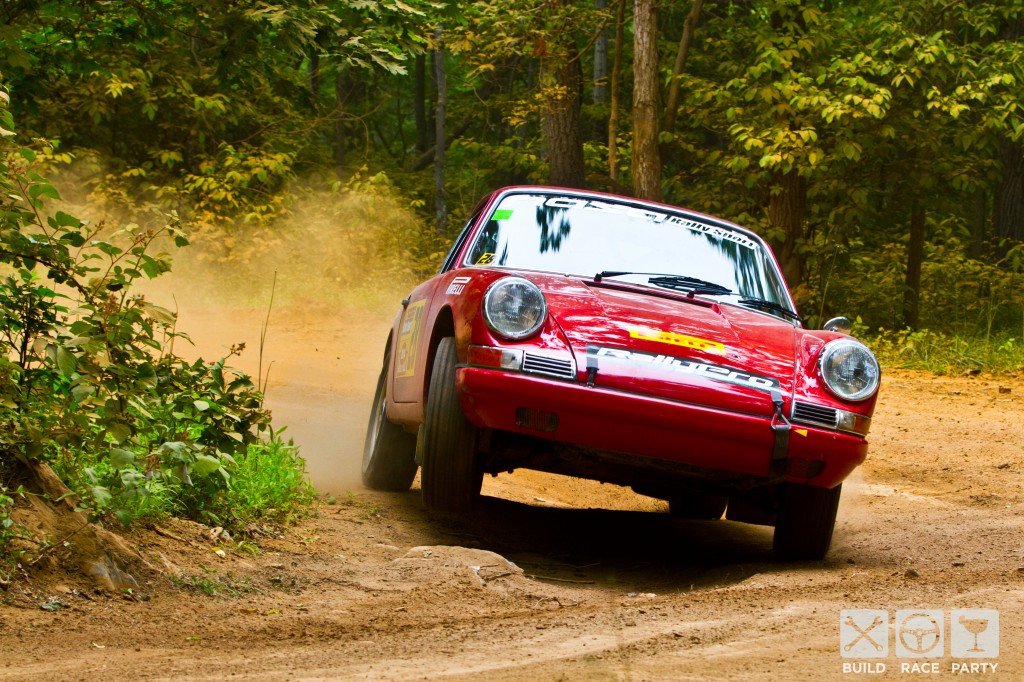 Once the stages finished awards were given out, three different sizes of red bull and Atlantic Rally cup glasses. 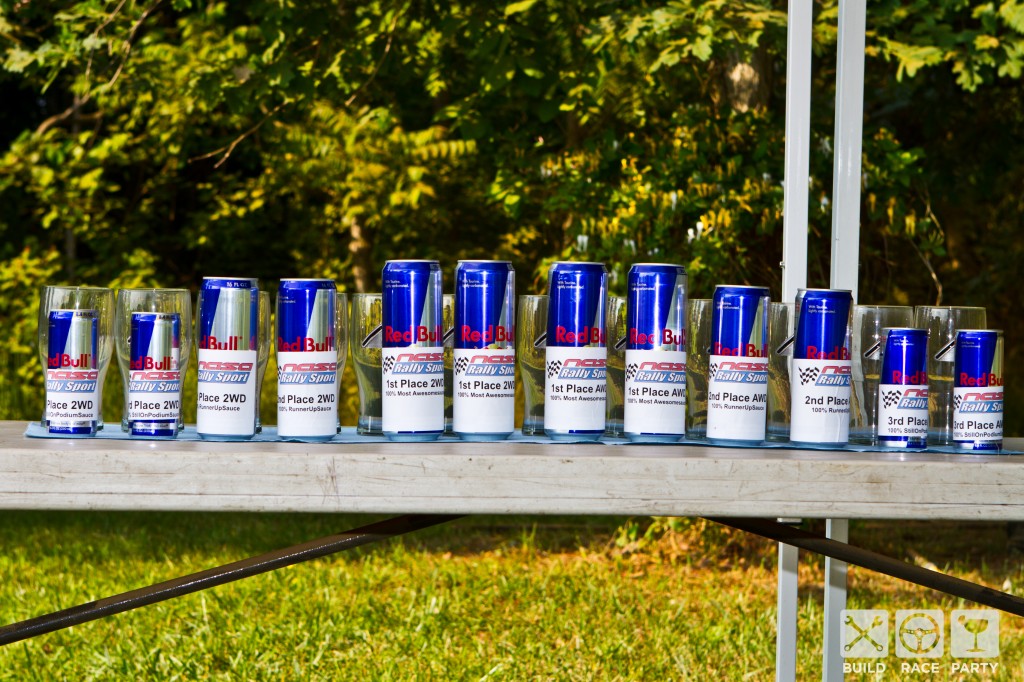 The event itself was a ton of fun, and extra laid back compared to a normal rally.  More about hanging out and having a good time than full on competition which creates a stark contrast to what you get at other Rally Events.  Definitely worth checking out next year if you are looking for a way to gain some rally experience, a few championship points, and get to know the teams better in a less stressful environment than the normal Stage Rally services and starts.