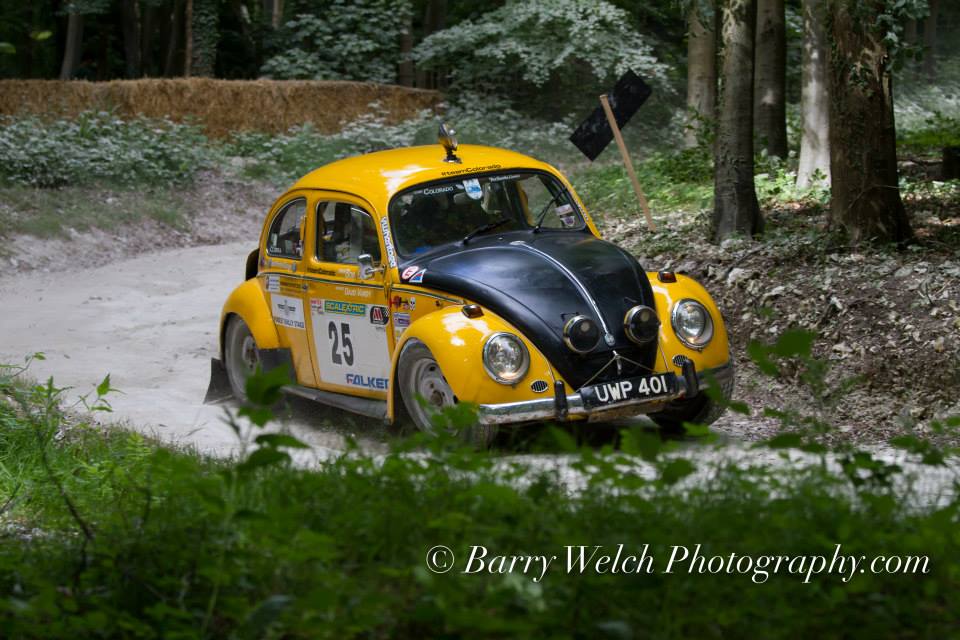 Thursday morning arrived with a glorious sunrise and Goodwood Festival of Speed 2015 had begun. The stand crew jumped into the cars and made the trip to the bottom of the hill to take centre stage presenting their products and VrDMotorsport to the early arrivals. Because of the late completion in contracts we still had yet to receive our passes so I thought there was only one way to make it through the early traffic quickly, get into the main entrance and pick up our ticket pack; The VrDMotorsport Safety Car !! 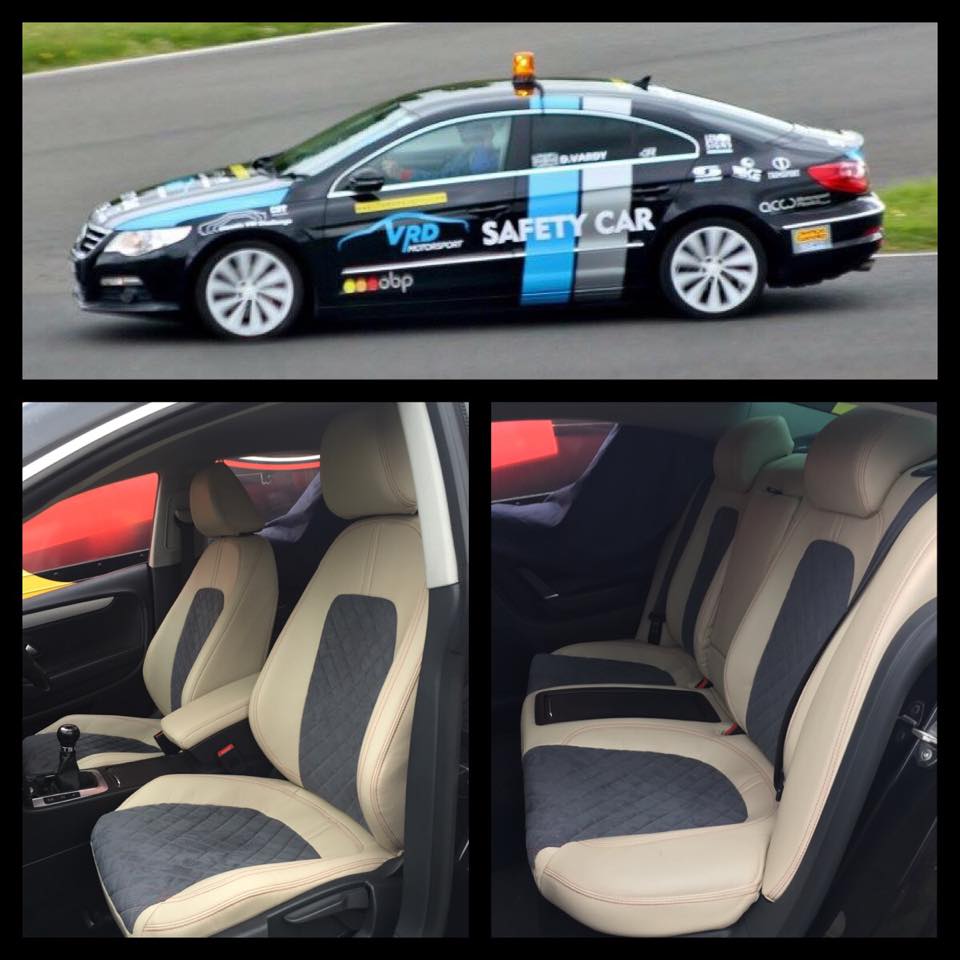 The lights were fitted to the roof and windows and we made our way down the side rad of Goodwood Grounds where traffic moved out of our way and stewards ushered us through. I couldn’t believe how well received the Passat was at this prestigious event !!

Making my way back to the rally stage I could now relax with Bob. We had a busy but relaxing Thursday planned as we needed to sign on and have the Beetle scrutineered for the Timed Shootout competition. 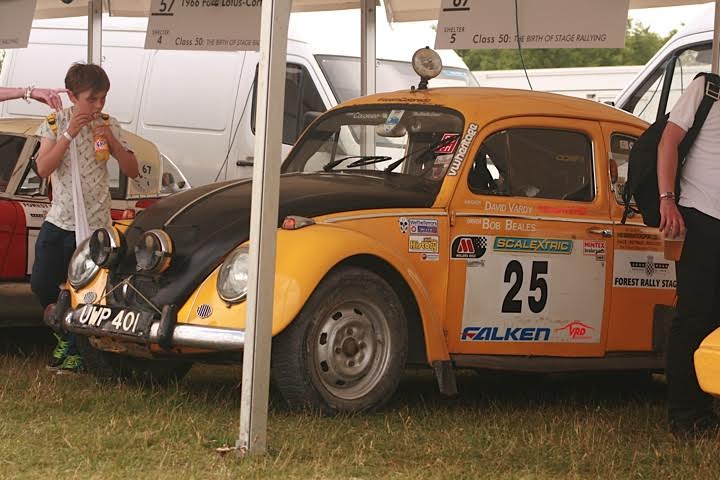 We were approached at around 10am and asked if we were going to do some recce runs on the stage “Later on yes” I said. “Can you go now?” we were asked ! The crowds were making their way to the top of the hill and looking at the stage, it was the busiest I have seen to date. Its time to put on a show for the fans !!!

We donned our race suits and Bob took the Beetle to the start line, it was like we had never left. Bob drove a sighting lap with good pace and on first attempt drifted the bottom hairpin perfectly! We were in for a great weekend of running. 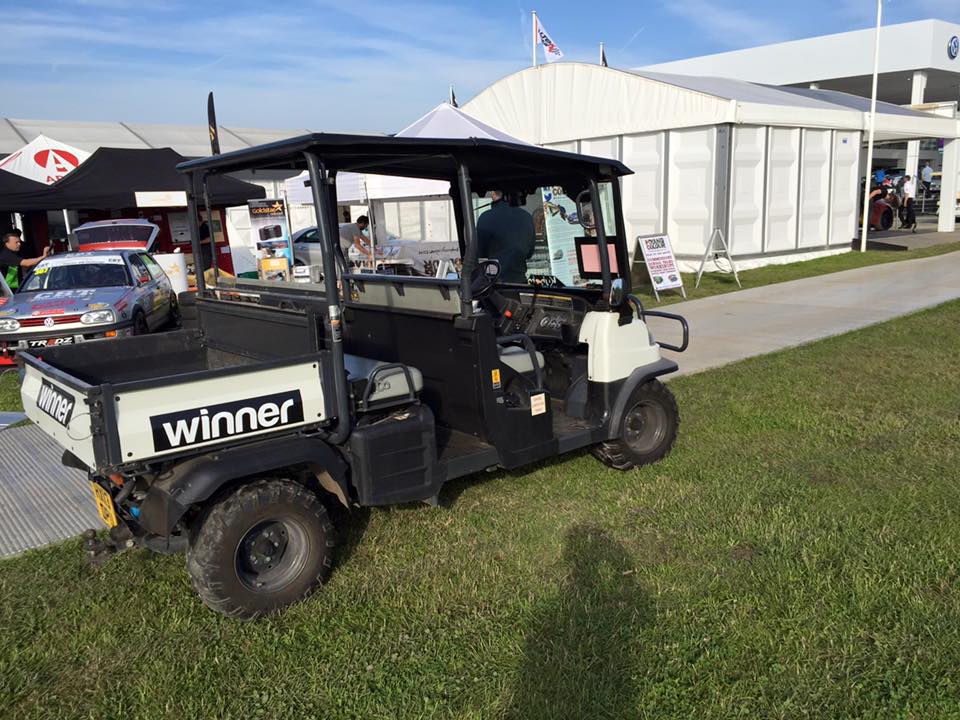 The day flew by as we collected our prestigious Tag Heuer Drivers Club passes and our all-terrain Golf Buggy that would be a lifesaver getting us around the event throughout the weekend.

We closed the day off with a great evening of laughter and story telling with our team and even took the Golf Buggy on a sighting lap of the Forest Stage to work out the best lines for the shootout the following day. After all, things got serious come Friday and we were not there to make up the numbers.

Friday morning came and we were politely asked if Jim Valentine could run first on stage in his fantastic historic Saab Rally Car, a Goodwood regular. As Bob’s Beetle was now the oldest Rally Car there we were positioned at the top of the line-up and first to run but we could wait an extra 30 seconds for sure. The whole team lined up watching as we hit our first competitive run, the Goodwood Cameras followed the Beetle throughout the whole stage and gave the spectators some great footage of Bob tearing up the Forest Stage like the Beetle was brand new! 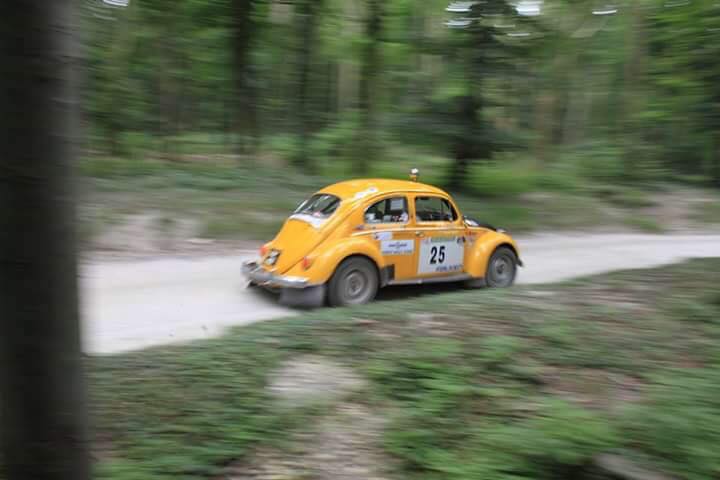 As soon as we had come off stage I made a dash to the top Drivers Club. Ken Block was appearing with his Hoonigan Mustang and this was one car I didn’t want to miss out on seeing in the flesh. Also in the same batch was Mad Mike Whiddet, the Red Bull star of world Drifitng made his first appearance at Goodwood in 2014 but I couldn’t get a chance to meet him so I was on the case this year

In tandem they both arrived at the top of the hill and put on the most spectacular drift show for the fans, it really was becoming the best spot to view the action up on the rally stage. With views of the amazing Rally Cars on stage to the left, and ahead seeing the full rosta of Hill Climb stars where else would you want to be.

When the drivers exited their vehicles I made a dash to meet Ken and Mike, I had to say how impressed I was of what they did and how they are an inspiration to the next generation. They were both fantastic people to meet and where very welcoming in some of the questions I had about their cars. Although I had promised never to take a selfie at Goodwood again after the Jenson Button incident of 2014 I couldn’t miss out on this !! CLICK CLICK 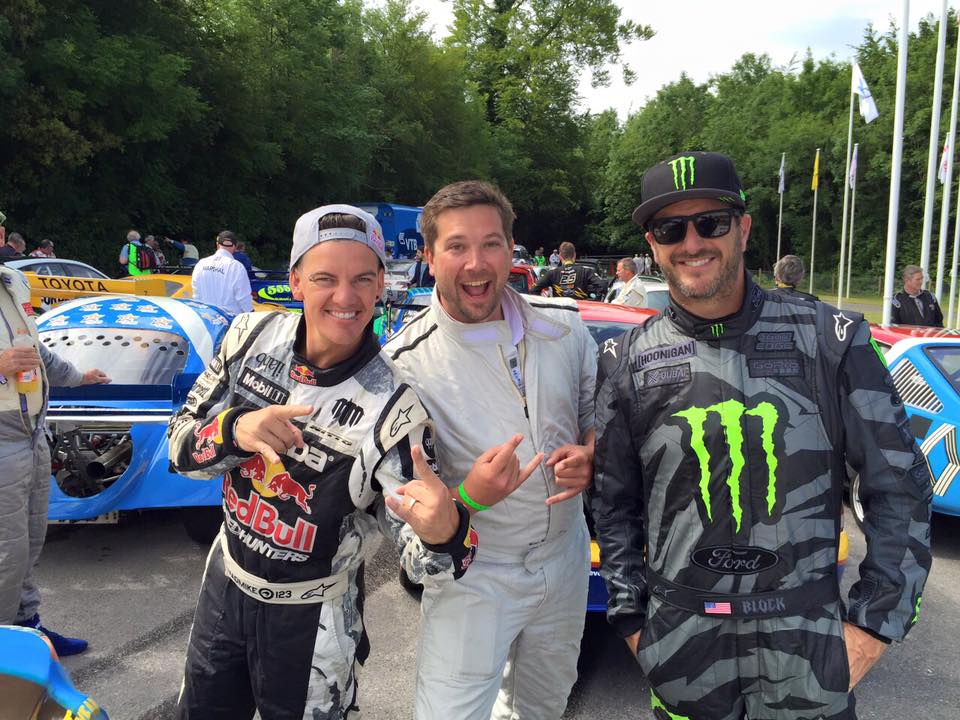 By this time Bob had joined me in the drivers paddock and we saw our Falken Motorsport Sponsored team mate James Deane, current European Drift Allstars champion, show how he became the top of the field in his Nissan Drift Monster. I took Bob with me and introduced ourselves to James who was another fantastic guy to meet. Really down to earth and has a great story behind him, starting in Drifting at a young age in a Ford Sierra Estate !!! We chatted for a while about how he was running the incredible Falken Azenis tyres on his drift car to which we also ran the same on our Safety Car. This had to be another selfie moment! CLICK CLICK ! 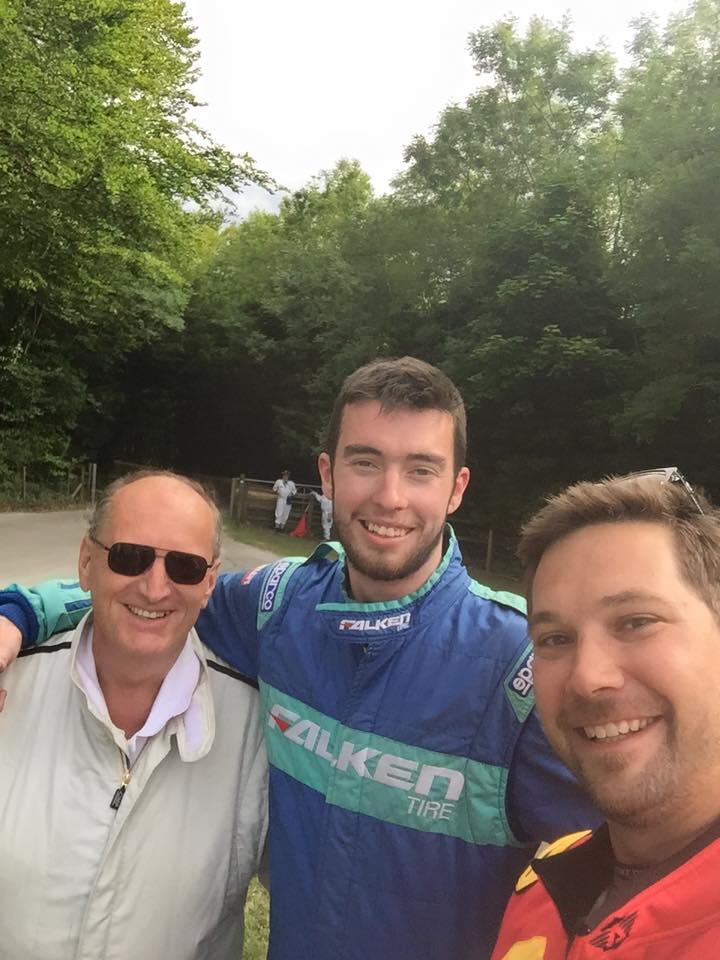 Friday flew by and we managed a good few more runs on the Forest Stage before the sun started to descend. We had met some fantastic people and where really getting in to the Goodwood spirit. We welcomed Nathan Hopkins and Morgan Rees that afternoon, our latest young drivers who we are supporting in Rally for the next season. Two great young lads who had bags of enthusiasm to one day join us in competition at the Festival of Speed.

We also welcomed our latest partner, Marc Waggit of Axcel who had designed and created a custom race suit for me, it was amazing !! I am a big Marvel fan and specifically like the story of Iron Man where a regular person can create something extraordinary so it had to be this! 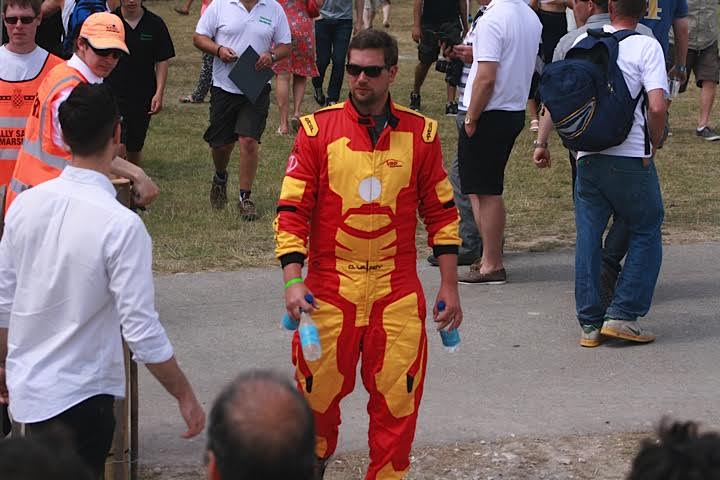 That evening we went to the Goodwood Hotel to relax at their outside bar. There were some fantastic people both fans and competitors there and we had a night to remember for sure! The conversation just turned on how we were going to go bigger and better in 2016 ! I didn’t want the night to end, going to the Ball on Saturday night meant this was my last night with the whole team of such fantastic people who I started this journey with all those years ago. 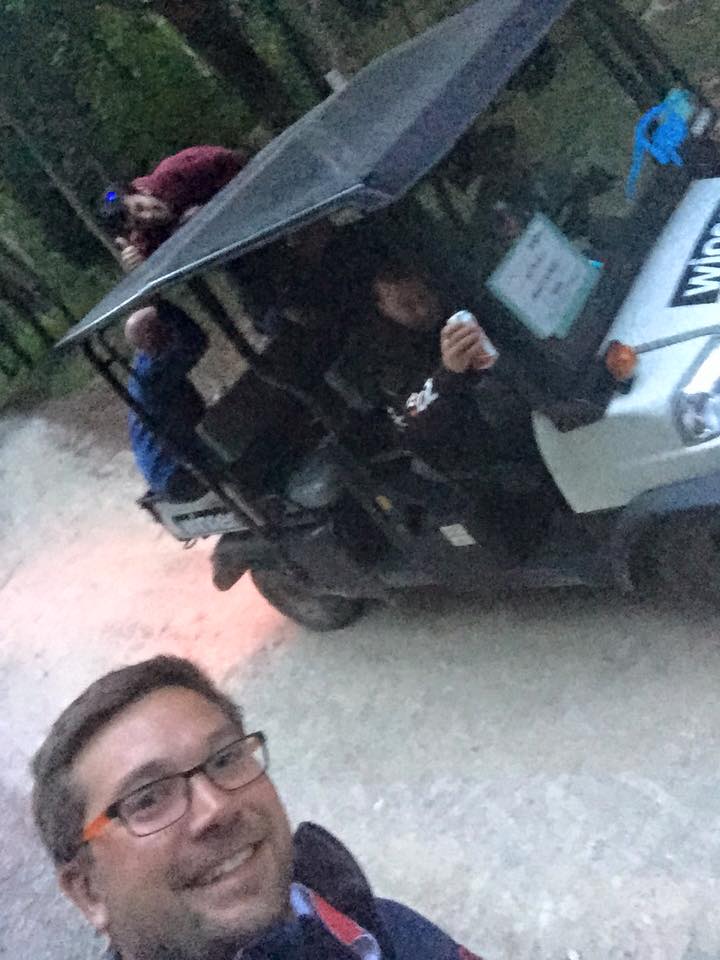 Saturday arrived and we were all a bit battered and bruised in more ways than one. I welcomed my parents to Goodwood and Bob welcomed his family. It was a great family day were we had the chance to show our loved ones what we did and why all those late nights building race cars happen !

Bob took his daughter on the stage in the Beetle that afternoon and the footage on is priceless. He told her he was going to hold off a little and ended up posting his fastest time on the stage throughout the entire weekend !! Despite a few words said I think she enjoyed the experience. 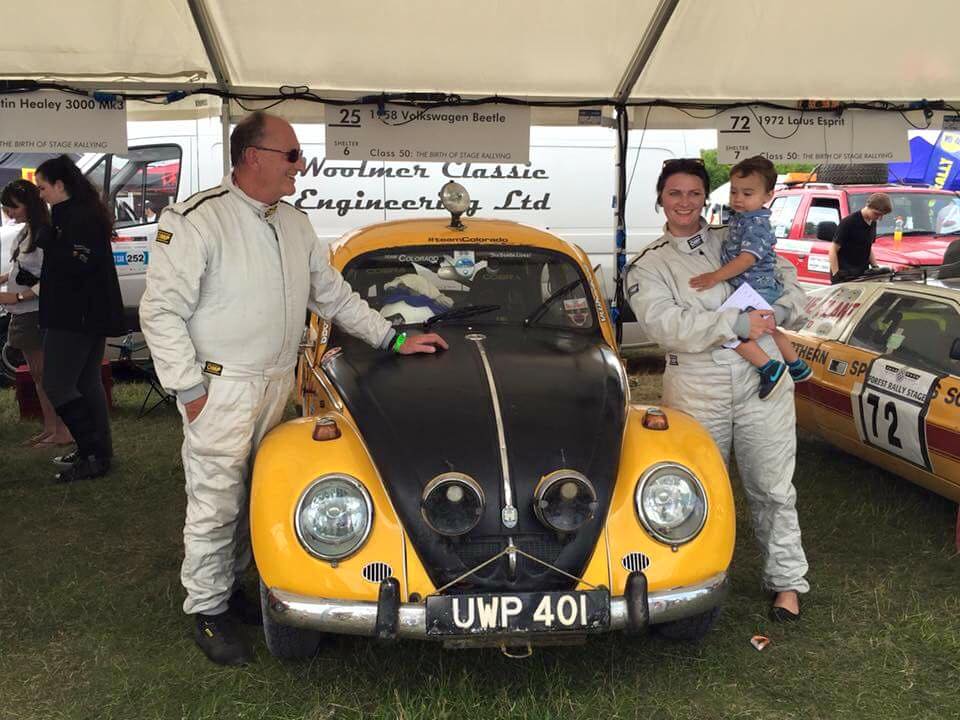 Meanwhile in the Drivers club at the top of the hill, Bob’s Grandson and future owner of the Yellow Peril was making his intentions known to a certain TV Chef. Jimbo and his picture waving to James Martin went viral and really set home the essence of what Goodwood means to a lot of people. Those who are competing today, new and old, and those who will be competing in years to come. 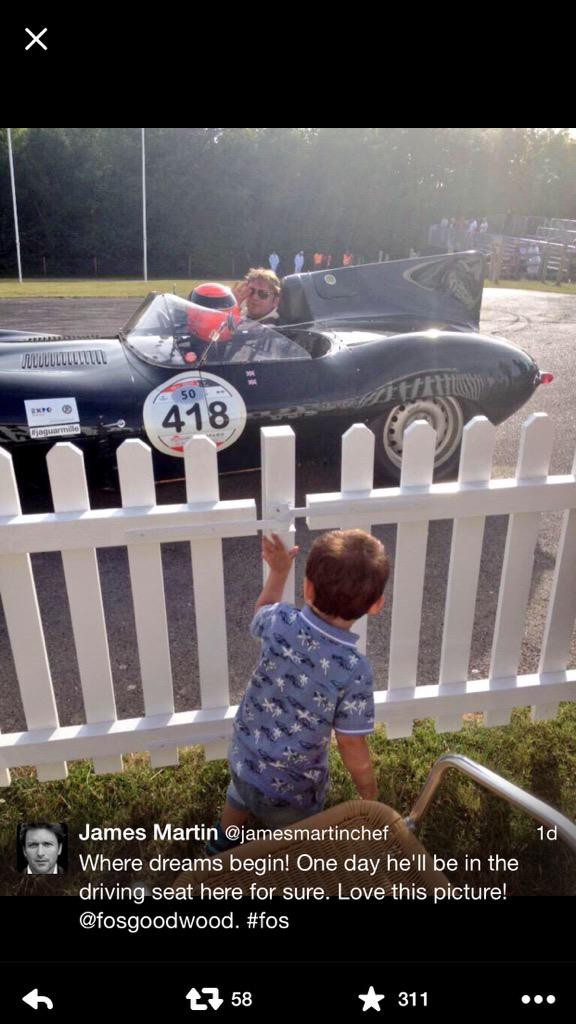 My wife Bronya arrived that afternoon also and looked as glam as ever as we started to get ready for the exclusive Ball Lord March puts on for the guest of the Festival of Speed. We still cannot believe how far we have come to be recognised with an invitation to this event and pinch ourselves daily to be stood amongst the worlds top stars and celebrities.

We sat with our good friends at AM Cars who present their illustrious display of Audi Quattros on the rally stage. Bronya met with Carola Jennings and Nicky Clarke to get their ball gowns on and the guys, well we just did the guy thing and donned the Black Suits of course! Selfie Time? Go on then ! CLICK CLICK !!! 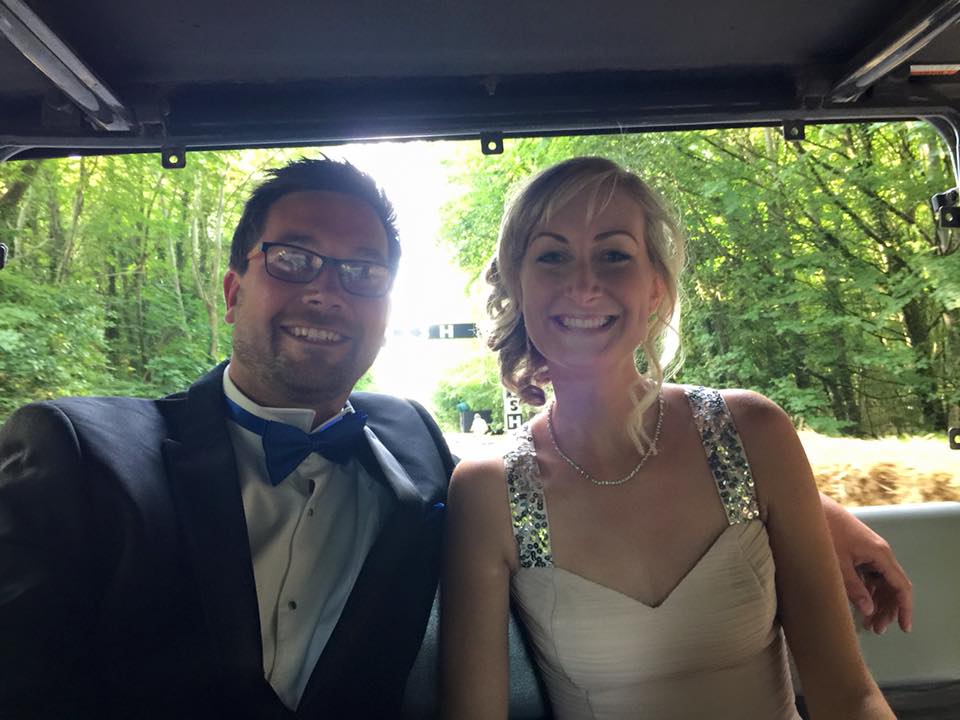 Last year we made the home page of MSN with our entrance on the Golf Buggy so this year we would go one further and take the safety car with Ian Fowler and Bob Beales in full race attire dropping us at the door. Had it not been for the Monster Energy crew to arrive in a monster truck we may have been stand out but we certainly arrived in style once again.

I looked at Bronya in the back of the car and we both smiled as our doors opened and the cameras began to flash ! But what could possibly be on show at the Ball this year?