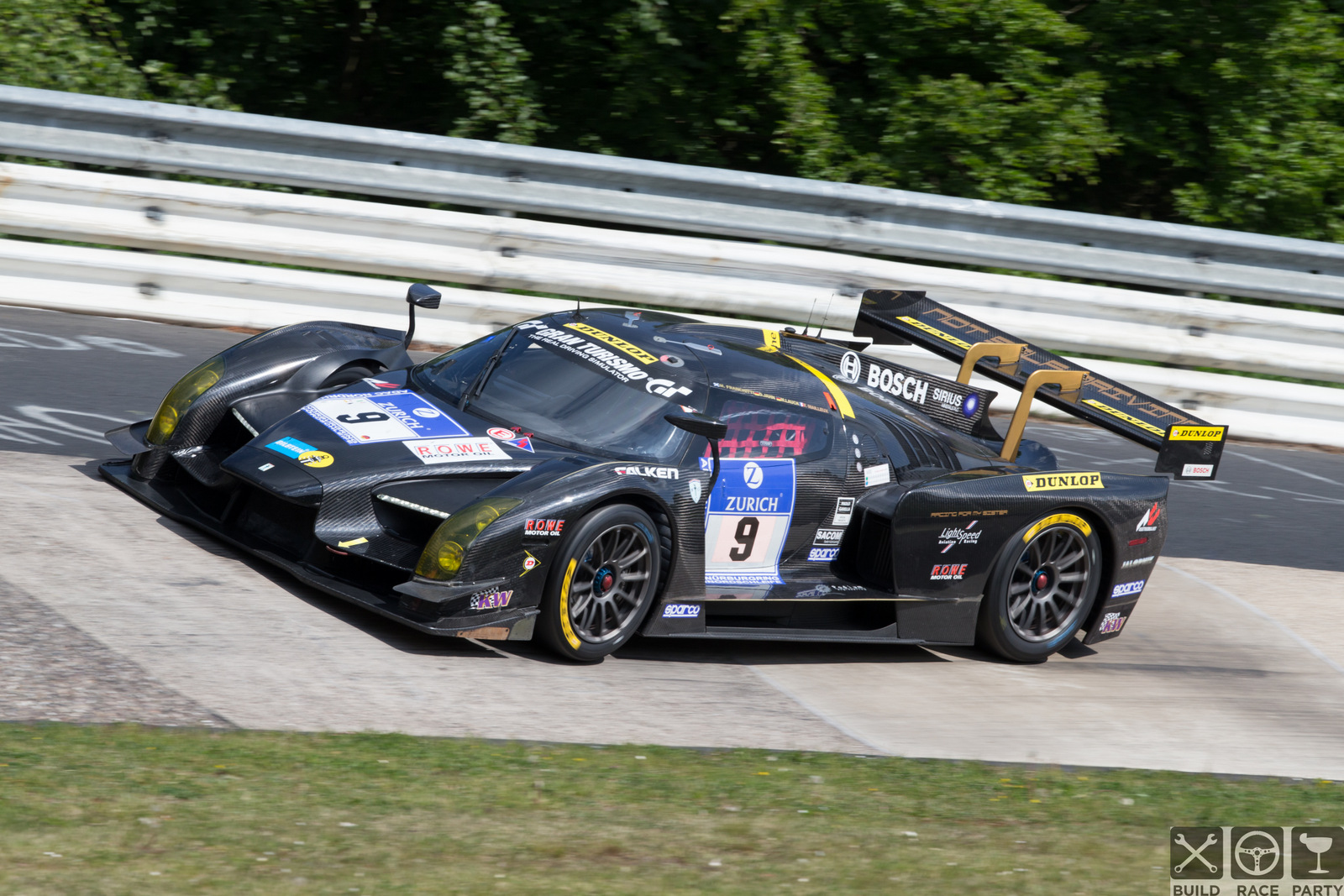 So now that we’re all coming down off of our Le Mans high from 3 weeks ago, let’s look back at another 24 hour endurance race that happened the month before: the ADAC 24H Rennen Nurburgring (“N24”).

Why am I talking about this race now? Well, because if it isn’t on your bucket list then it should be for 2016, so write this down now.

Le Mans brought us an amazing race this year and for the first time in many years, we have a new champion. I was glued to the edge of my seat watching Porsche decidedly beat the pants off of Audi (Yeah, I know that sounds awkward. But you get the idea). The speeds were like nothing else I’ve seen in a long time. Finally we are returning the point of racing: competition and speed. Finally, we are getting back to what racing ought to be. Hell-to-the-yes! Blinding, terrifying, terrifying blazing speed. Damn I love Le Mans! 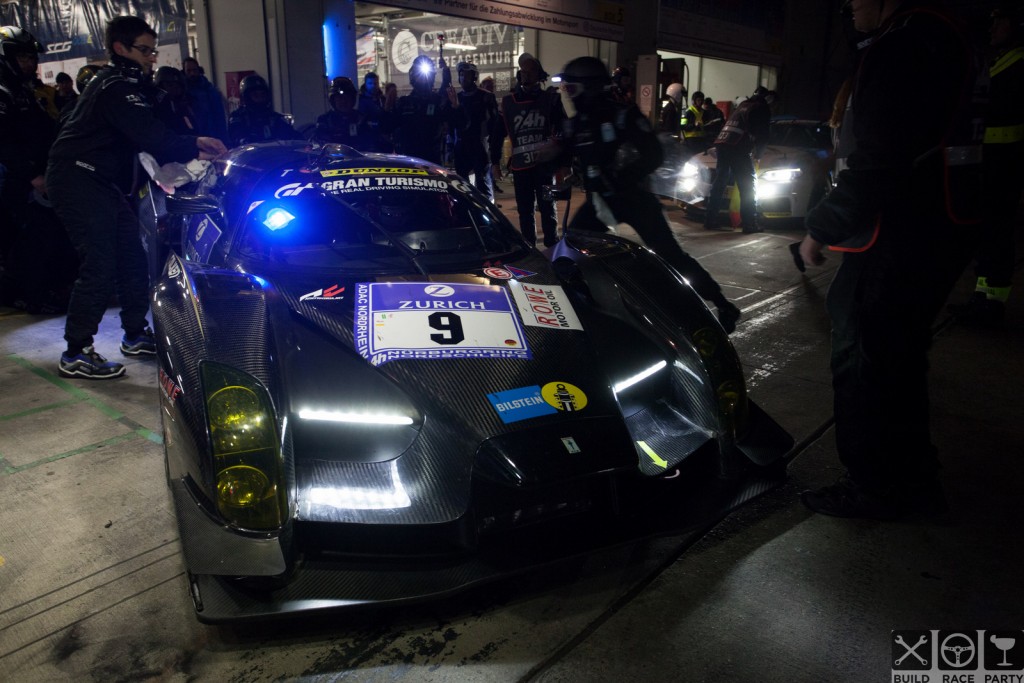 So what about the N24? Well if you have to decide whether to see Le Mans in person or the N24, I am here to tell you that the taste of fromage on baguette is over-rated and that you are better off with bretzels and sauerkraut.

The spectator experience at Le Mans is limited to the exit of the Porsche curves to tetre rouge.  You can’t really see the Porsche Curves, just the cars slowing down as they come out of them…yawn. And you can’t really see the speeds on the Mulsanne because the cars are still accelerating away from you as they leave your sight. The cars in your view at Le Mans hit about 130-140mph tops. Whoopty-friggin-doo…we know they can go much faster than that. Wouldn’t it be awesome to see a car travel at 200+mph as it tears at the very fabric of existence? You won’t see that from your spectator viewing area at Le Mans. Sorry lads.

And for you avid photographers out there, the situation is even worse at Le Mans.  If you want to get that awesome start of the race be prepared to shoot through two safety fences built to the heavens. You can try the Dunlop grandstand for a million euros (and don’t forget your 5000mm lens, because that’s how far you are from the cars at that location). 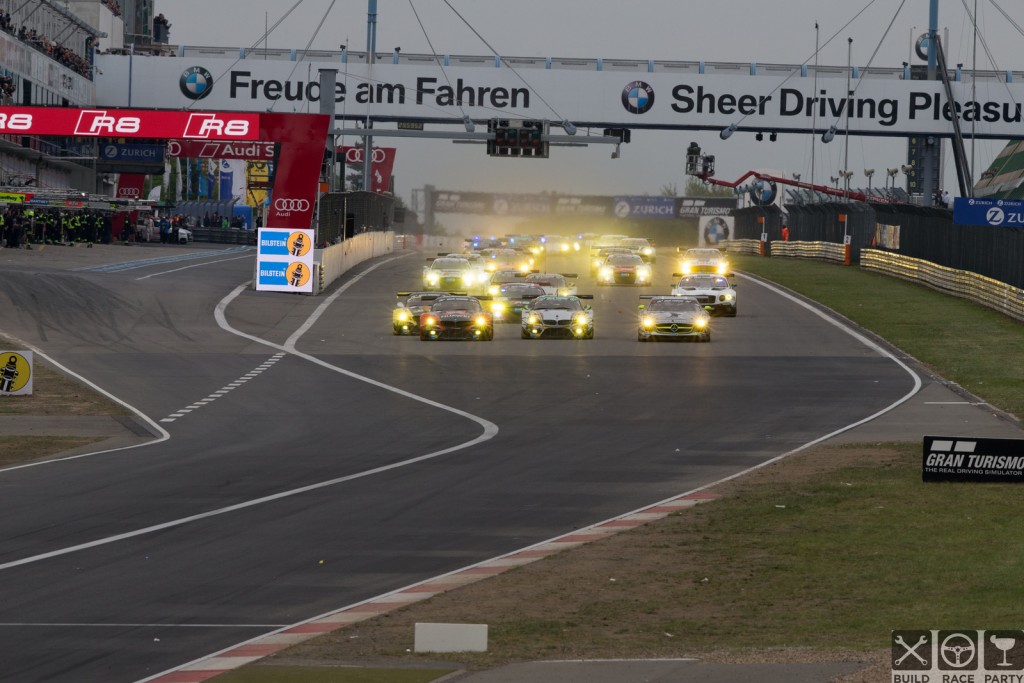 I was super-bummed at my first Le Mans because I had to practically climb a tree to get an acceptable shot of the cars — from behind (sigh). You can take shuttles to a few corners (safe bloody catch fence, same limited viewing). And give yourself about 4 hours to travel to/from your car to the corners because traffic is horrendous. Really, unless your last name is Ford, the best place to see Le Mans is from right in front of your TV.

But the N24 — that’s the way racing used to be in the 70s. You can walk through the grid before the race, see and touch the cars up close. You can talk to the teams, the drivers, take photos with the grid girls and the person in the Haribo suit. Plus, you have hundreds locations around the track from which to take amazing photos of the cars. And if partying is your thing, then you really don’t want to miss the crowd around the Nurburgring. You won’t see any fences built out of empty beer bottles or a VW bus converted to a pirate ship at Le Mans, I can promise you that. 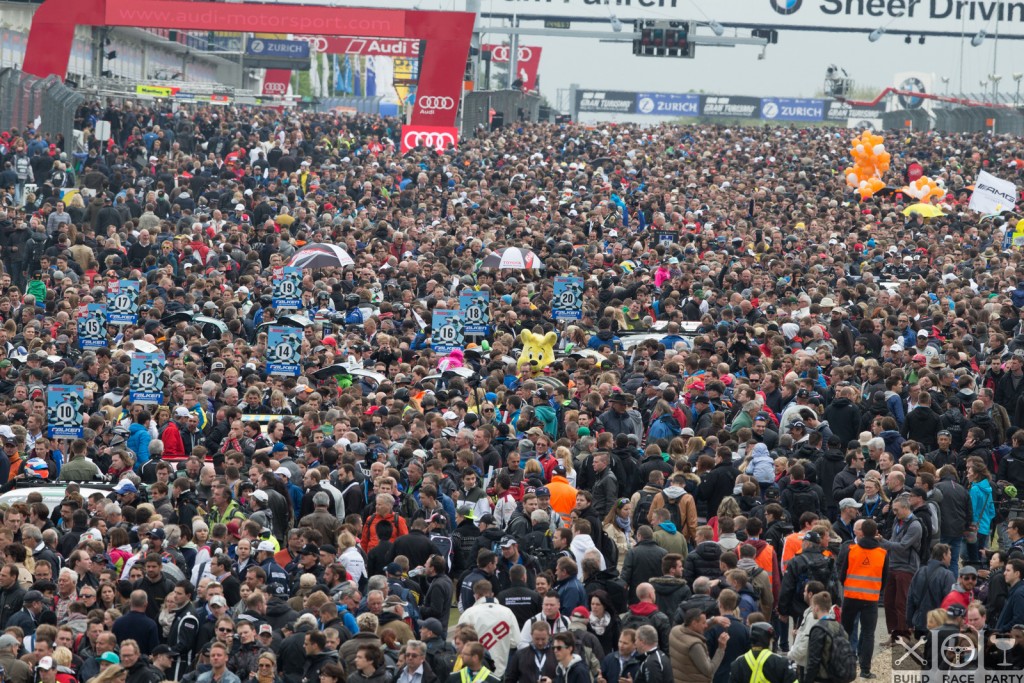 But taking a step back for a moment, look at the cars. At Le Mans, the prototype (specifically the hybrid LMP-1) cars are the stars of the show. Not even the Shelby Cobras in the 60s (which won the GT class) got the same media attention as their Ford GT kindred (which DNF’d in those early years). And that’s cool. The GT racing at Le Mans is legit. But at the N24, it’s all about the different classes of cars. 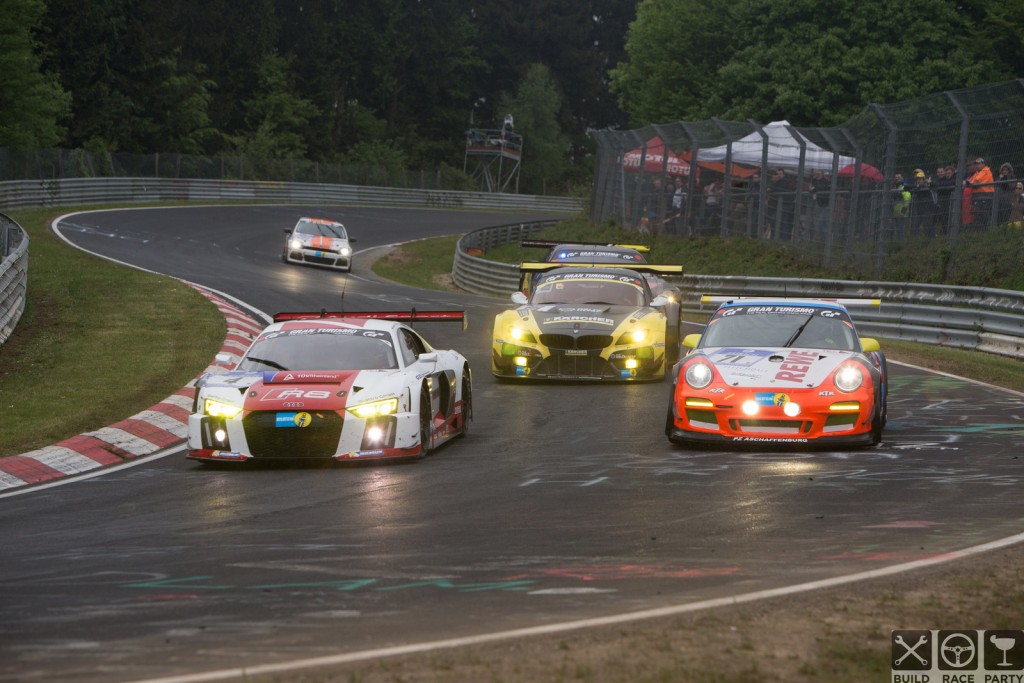 What I love about these cars is that they have obvious road-going counterparts (if, in fact, they didn’t start out life as a road-going car that was modified for racing).  Porsche GT3 RSRs, Audi R8 LMS Ultras, Nissan GT-R GT3s, Aston Martin DBR-9 GT3s, and the Subaru STI. The technologies tested and developed at the N24 fit directly into your car. While the technology at Le Mans is awesome, it takes a while for it to fiddle down to something that will go into your car (example: the diesel-powered Audi R8 hybrid is coming out when? Right. I arrest my case.). This is also a race for the enthusiast. Whether you are an heir to an oil-fortune, a motorsports shop, or just someone looking to race, the N24 welcomes you. You have a lot of something for everyone.

Now, onto this year’s race.

This year over 140 cars started the race at the N24. This event is so massive that three separate start groups are required to start the race. As before, GT3-spec cars took the lead in the beginning. This year we saw the arrival (literally driven to and from the track) of the Glickenhaus SCG 003 cars sporting 600hp Honda powerplants and a carbon fiber body styling very reminiscent of the classic Ferrari endurance racers of the 1960s and 70s.

Also present this year were the new Audi R8 LMS GT3 cars to all the fanfare we would expect for a new Audi at an endurance race.  Familiar teams such as the Marc VDS BMW Z4 GT3 and Black Falcon (with multiple entries in different classes) were also a welcomed sight. 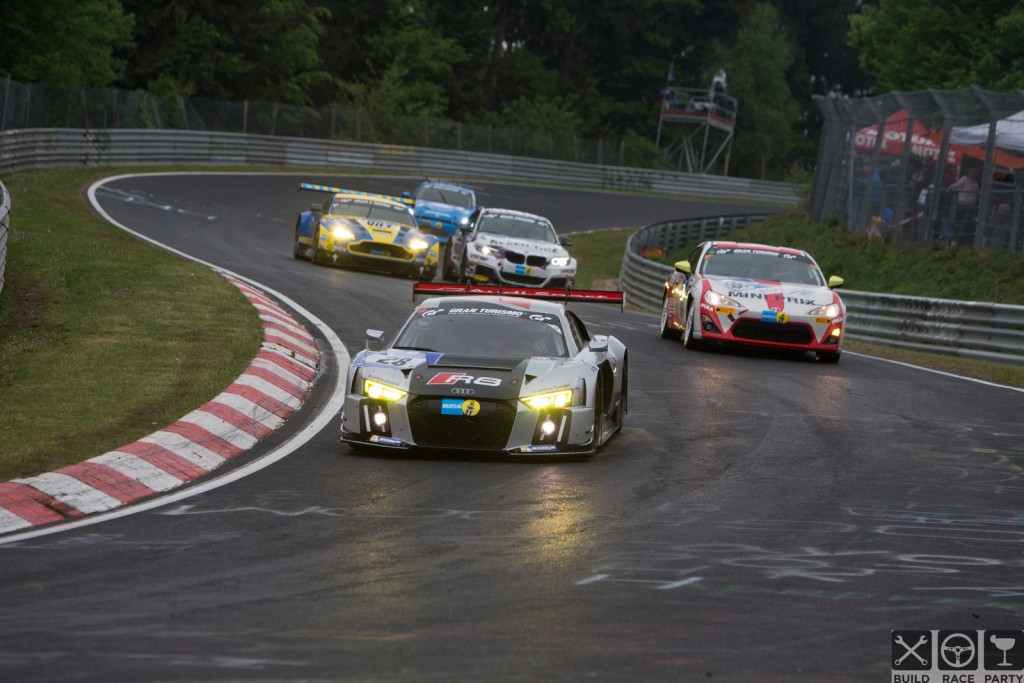 The 2015 race was also the first to have imposed speed limits in place: a 200kph limit at Flugplatz, a 250kph speed limit on the stretch between Flugplatz and Schwedenkreuz, and another at Dottinger Hohe. There were many questions about how this would affect the race since drivers would have to either manually lift off the throttle or their cars were equipped with automatic speed limiters. Following the tragedy at Flugplatz earlier in the year, these speed limits seemed like a reasonable solution given the short time frame between the accident and the race.

Nissan GT Academy fielded a single entry this year, choosing to focus their attention on one car rather than the usual two. In the paddock, the shock and sadness over the tragic accident at the VLN races in April was clearly visible on the faces of the crew. Unfortunately, the team was locked out of the top 30 qualifying on the eve of the race due to speed violations in one of the limited zones. 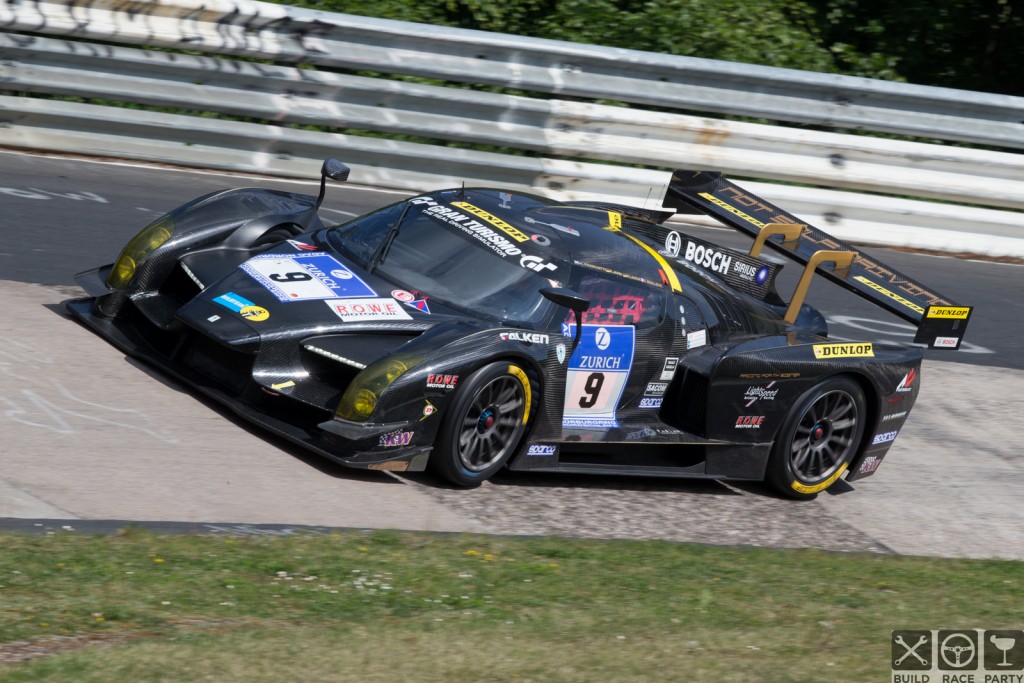 Qualifying for the event took place over an evening session that was marked by some light rain and a morning session where a drying track challenged the drivers to push for a final starting position on the grid.  Rain, they say, is quite the equalizer. This adage was proven true again as cars in slower classes were able to move up in overall classification.  This brought a wide smile to the Subaru STI works team, which at one point was classified in the top 20, nestled well among the GT3-spec crowd.

Race day opened up to cool, if not simply cold conditions. The race started with close grouping of the fastest pack of cars. There were no “rabbits” this year as we witnessed last year with the McLaren. Rain began to fall on certain parts of the track within the first few hours. This led to several spins and few retirements. Given the length of the lap at the N24, safety cars are not employed. Rather, slow zones are utilized and an intervention team (2 pace cars and a wrecker truck) is dispatched. 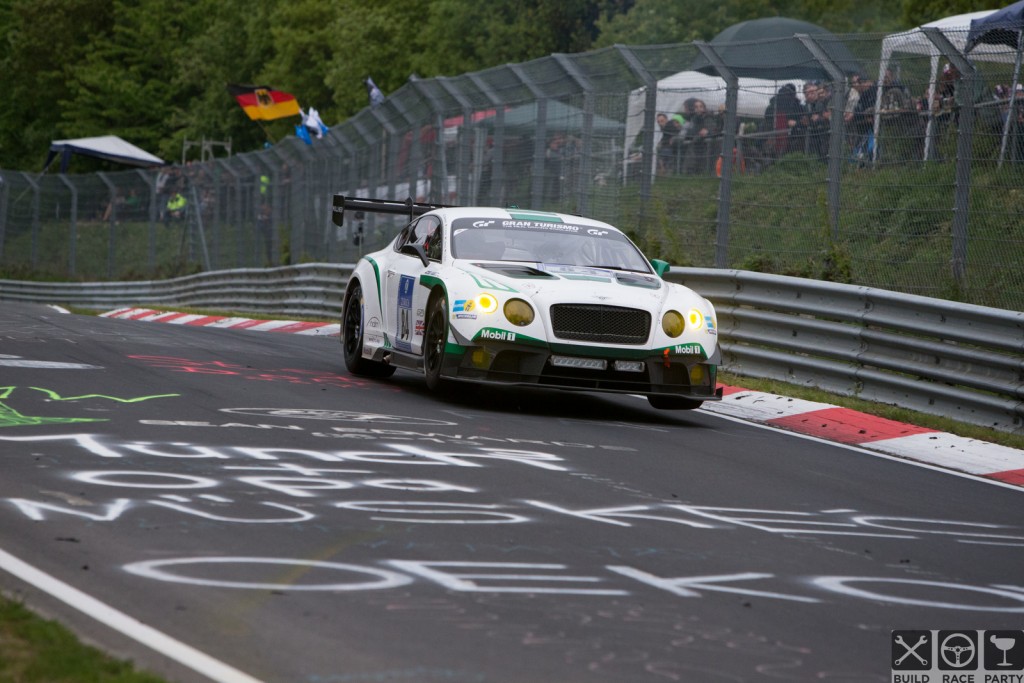 Within the first 5 hours of the race there was active shuffling for the lead between the German car makers but only 6 cars remained in the lead lap. However, 2 additional hours later, 6 more cars  joined onto the lead lap and the interval among the first 10 cars was less than 5 and a half minutes. Throughout the night, the teams fought on: pit stop upon pit stop. Some cars returned to serve penalties, while others returned with more serious damage requiring lengthy repairs. 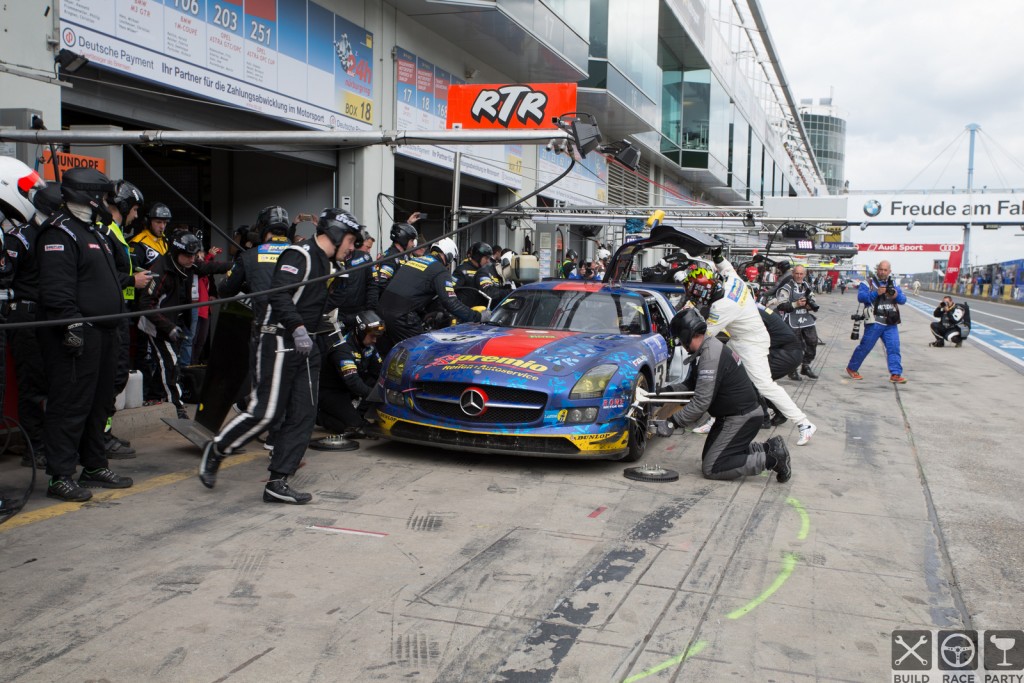 By daybreak it was the BMW Z4 GT3 of the Marc VDS team that held a slim 1:53 second lead over the Falken Motorsports Porsche 997 GT3 R. But the battle was still close: the next three spots were less than 5 minutes behind.

As the race was drawing upon its final hours, many blurry eyed and red-faced crews were looking at the clock as if willing it to move faster. While those in chase of a position begged for more time or for something to happen that would give them an opportunity to advance.

Then during the last hour I witnessed something amazing. Teams in the lead or near it were anxiously watching their telemetries, but a few others were busy nursing cars back into the race just for the satisfaction of knowing that they could finish. As the ailing cars were hastily pushed out of their garages on last time, the mood on the pitlane started to change.  Neighboring crews, who were fierce competitors just hours before, suddenly erupted into roaring applause and praise for the teams that repaired their cars in time to finish. It was a wonderful sight to see, something that isn’t covered enough through television coverage, but is something that gearheads and racers know quite well.

As the final laps ticked by, the Marc VDS BMW Z4 was pushing with every last ounce of grit and grip to catch and pass the #28 Audi Sport WRT R8 LMS, but it simply ran out of time. The final interval between first and second was 40 seconds, a record for the closest 1-2 finish in the history of the event.

Damn this was an awesome race.