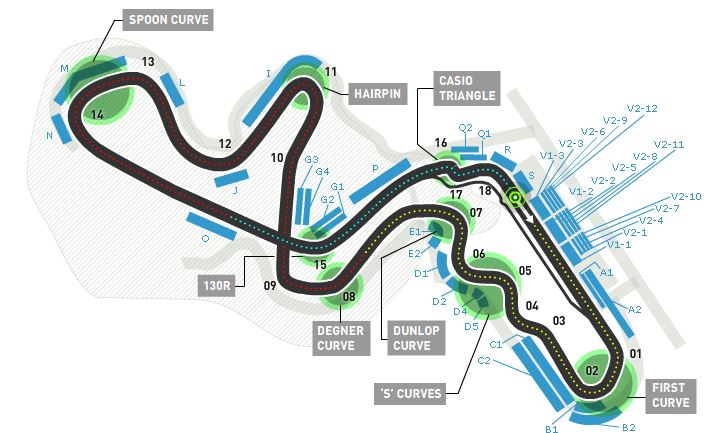 One of the greatest tracks used in Formula One racing today, Japan’s Suzuka circuit is a massive test of car and driver ability. Built by Honda as a test facility in 1962, the track was designed by Dutchman John Hugenholz, the Hermann Tilke of his day. A huge theme park was also constructed at the track, including the famous big wheel which dominates the Suzuka skyline.

In 1987, having hosted various sportscar and F2 races, and having lost out initially to Fuji in the race to host the Japanese Grand Prix, Honda’s influence finally prevailed and the Grand Prix had a new Japanese home. And – 2007/8 aside – at Suzuka the race has stayed ever since, providing the scene for many nail-biting end-of-season deciders, including the infamous collisions involving Alain Prost and Ayrton Senna.

Suzuka includes some of the F1 calendar’s most challenging corners. Among the drivers’ favourites are the high-speed 130R and the famous Spoon Curve. On top of this the circuit’s figure-of-eight layout makes it unique in F1 racing.