My friends and I recently competed in our first endurance race with AER (American Endurance Racing) at Watkins Glen International. It was incredible. And, a lot harder on equipment than I imagined.

We started with my well-maintained 1989 BMW 325is that I previously used for racing in NASA’s Spec E30 series. For those who don’t know, Spec E30 is a series of shorter, “sprint”-style races (each about 30-minutes) and the cars are all nearly identical in build. My car is lower on horsepower relative to some of the E30’s in the class, but it still allows for loads of fun. 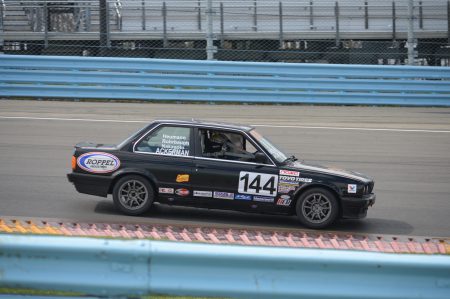 Anyway, other than a few 24 Hours of LeMons races and the occasional Baja 1000 race, I’ve never really done any endurance-style racing. Despite qualifying P2 in our class on Saturday and running a good race we had a differential failure that afternoon. Then, on Sunday, we were able to maintain a top-3 position for much of the race only to suffer an electrical issue followed by another failing differential.

I have never experienced a failed BMW differential in nearly 20-years of doing this. I expected to learn some things, but I didn’t realize how steep the learning curve would be. I don’t think any of us did….

Have a pit-stop strategy… that works

In AER you have a certain amount of mandatory pit stops based on a formula. For each of our 9-hour races we were required to stop 5 times. Each stop had to be a minimum of 3-minutes from the time you enter the pit lane to the time you exit the pit lane. That means you have approximately 1:45 minutes to get the car fueled, drivers changed, tire pressures checked, and whatever else is needed. It sounds like a lot of time, but it’s not. Especially, if you don’t have special fuel jugs for quick-filling the car.

Like most track people, we brought our collective collection of motorsport-style jugs (like these from VP) — I think we had over 10 of them. Prior to the weekend we had not timed ourselves fueling, but we quickly learned these jugs take about a two-minutes to dump 5-gallons! With a few hacks we got that time down to about a minute, but we learned there is something better out there. The Hunsaker Quickfill jug. With the proper set-up, teams can dump 5-gallons in less than 0:30!

Fueling aside, being able to get into the pits during a full-course yellow can have its benefits. Due to a limited crew we missed the first big window, which put us a lap down immediately. Then due to a red flag situation the track was closed, and this time counted as a pit stop. We weren’t able to fuel during this time, and despite having a fuel efficient car, we still needed more pit stops to have enough fuel for the race.

By Sunday, we had the stops down… if only we didn’t run into car issues.

“It sounded like I was getting passed by a supercharged car, but no one was around!”

When our 4th driver — Gary Nakasto — was driving his stint on Saturday, he was starting to claw his way back towards a podium finish. Then we didn’t see him for several laps. As a team made of friends there is nothing worse than not seeing your car come back around. Then the obligatory full course yellow came. I ran to try and establish communication (more on those issues in a minute) only to see the car coming in on the rollback. “Shit, my car is being towed in!” I yelled to the team, not knowing if Nakasato was hurt or the car was damaged. My heart sank.

Fortunately, Nakasato was uninjured. He noticed the change in the gear noise and slowed the car just in time for the rear wheels to lock and the car to snap around. “It sounded like I was getting passed by a supercharged car, but no one was around! It didn’t make any popping noises, it just went from normal to locked in a few seconds. I heard the change in noise and immediately slowed the car. And, then was able to save it from going into the wall.”

From our best guess, the pinion seal had failed. The diff lost its fluid, overheated, and ate itself. As I tend to bring along spares of just about everything that doesn’t require special tools to repair, I happened to have a spare diff. However, the spare had a known pinion seal leak, so we didn’t have high expectations. Nevertheless, we spent the better part of Saturday night installing the spare and were ready for the morning.

With some luck we went from dead last in our class to P1 in the first few laps on Sunday. With multiple full-course yellows to time our pit stops we jockeyed around between P2 and P3. Then, we timed a full course yellow perfectly. We came in, fueled, and swapped drivers. A flawless stop. P1 came in just as we were finishing our stop, which meant we could take the lead! “Start the car!” Nothing. Three of us, fully suited (per the rules), tried push-starting the car. For a second or two we were in P1 when we pushed past the leader, but our car wouldn’t start.

As you can’t work on your car in the pits we had to tow the car to the garage. After testing a few things (fuel pump, etc.) we realized we weren’t getting spark. The damn battery disconnect had cracked on the backside and wasn’t making a connection. We fixed it and sent the driver out, but we had lost 40-minutes or so at this point. After a good stint, the driver became concerned the differential was going, so we called him in. No use putting any of us in harms way.

Among the many things we learned, having working radio communications is key for endurance racing. Well, for any racing, really, but more so for when you’ve got pit stops and long driver’s stints to deal with. Being able to get the jump on a green flag or tell your pits you are preparing to stop can make or break a race. Unfortunately, we ran into some trouble with our radios, which meant we could only communicate along the front straight. This compounded itself when we lost the differential couldn’t find out if our driver was safe.

As in all things, you live and learn. With our first race experience we found out we have a chance to run at the front of our class. We have a team of consistent drivers who all enjoy being together. And, we have found several of our weak links. I’m sure there will be more trouble spots that will arise over the course of the season, but we will address them and keep coming back. That’s racing, as they say!

See you next time. Remember to check-us out on Facebook or keep checking back here on BuildRaceParty.com!

Photo credit and thanks:

Scott W., Stephan L., and the rest of the folks at Valvoline for their support
The Roppel family of Roppel Radiators for helping us stay cool and on the road
Rick Pierson of McParland Motorsport
Dave Burnett / Puppyknuckles (seriously cool photos)
Stacey Rohrbaugh (and for putting up with the team for the weekend!)
My wife and Ackerman Family Dental for allowing me to do such shenanigans