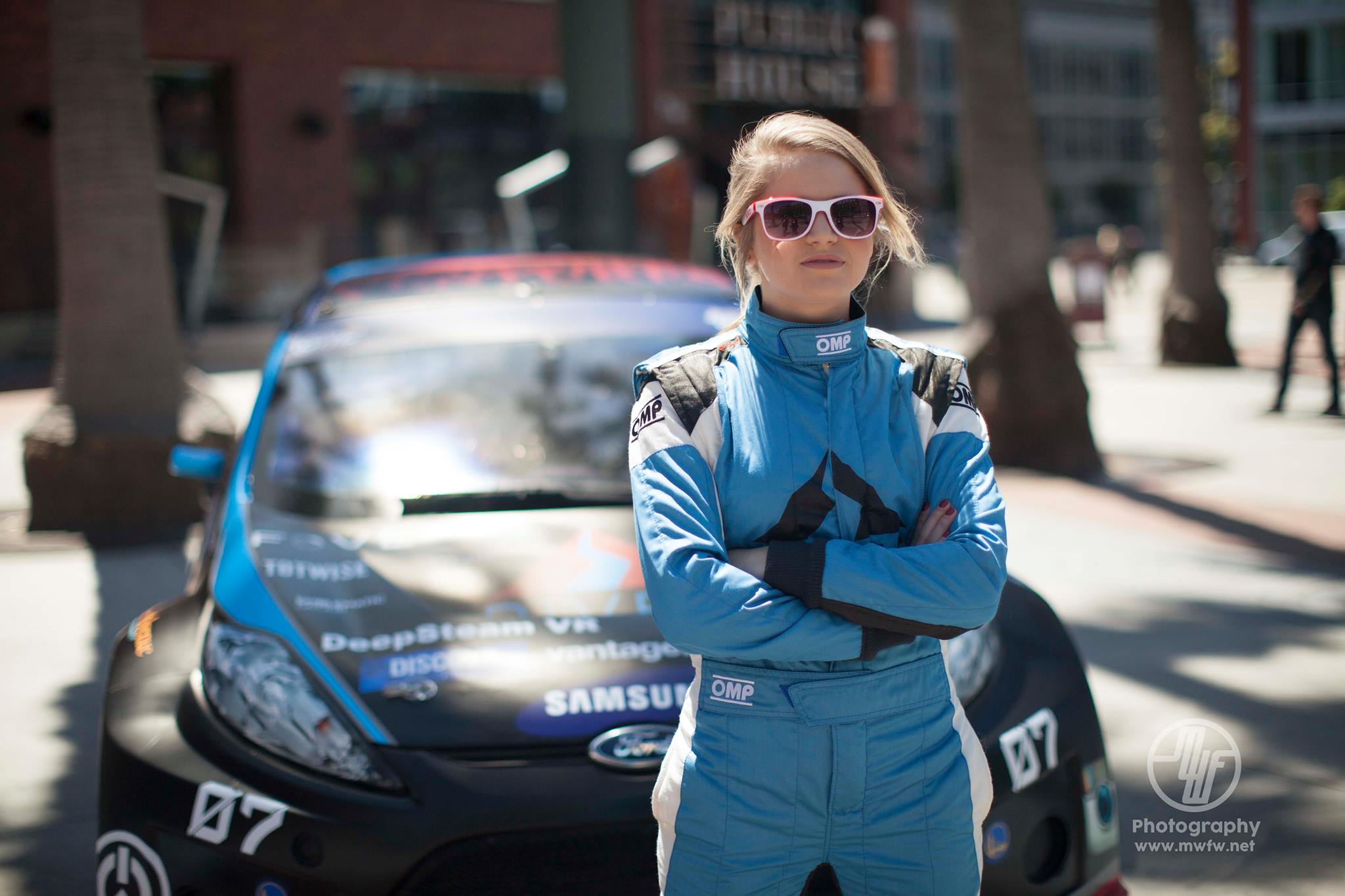 Collete Davis may have been the last driver in the 2015 GRC Lites lineup to sign a deal, but she’s also got one of the most impressive programs in the class. Her River Racing backing led her to working with the new Bryan Herta Rallysport team, putting her alongside Indianapolis 500-winning owner Herta and Supercar veterans Patrik Sandell and Austin Dyne.

It’s a major splash, but it’s nothing that Davis hasn’t prepared for with her extensive racing background—which has seen her work on her own behalf finding sponsors while maintaining a competitive track record. In an exclusive interview, she discusses how quickly her Lites campaign came together, offseason driver training, and expectations for her rookie rallycross season:

First things first—for Red Bull GRC fans who may not know you yet, what’s your racing background? Where have you competed so far and what are some of the accolades you’ve earned?

I started racing in karts and won my first karting championship at 15, making a transition to formula cars shortly thereafter. I’m a first generation racer, so I had to figure out a lot of things on my own. I started college at 16 and found my first major sponsor to continue racing in the SCCA while going to college for Mechanical Engineering at the same time. That year, I was Vice-Champion in the SPU class, and set a new track record at Sebring International Raceway. In 2012 I made my debut on the Mazda Road to Indy, and in 2013 was chosen to represent Team USA in the PanAm GP series (an international platform series for F1).

At Media Day, you mentioned that your deal to run GRC Lites came together fairly quickly. What sparked your interest in making a transition to rallycross, and how did this deal come together?

Believe it or not, the deal actually came together less than 48 hours before Media Day!  Despite the close call though, I’ve followed GRC and had my sights set on racing here for quite awhile—I believe the series will be a big part of the future of auto racing. GRC has grabbed the attention of millennials in a way that other racing series, and even other sports, haven’t been able to do, and that in itself offers great opportunities/exposure to my sponsors and partners. In fact my partner, Rothenberg Ventures, is known as “the Millennial Venture Fund”, and GRC is “the Millennial racing series”… perfect fit.

River Racing and yourself are partnering with a pretty impressive team at Bryan Herta Rallysport. How long have you known Bryan, and what are you looking forward to the most about racing with him and working with your Supercar teammates Austin Dyne and Patrik Sandell?

Impressive doesn’t begin to describe it! Bryan has assembled an incredible and diverse team this year and I couldn’t be more thankful we’ve been able to team up with him at River Racing. I’ve known Bryan for years, stemming from my open-wheel days in pursuit of the IndyCar Series. He’s seen me race, knows my background, and will be a great resource during my transition to rallycross. It’s nothing less than surreal to have Bryan as my spotter and driver coach as well. Both Bryan and teammates Austin and Patrik, have been extremely helpful in answering all of my questions in prep for the first race. Both Austin and Patrik have raced the Lites car as well, and will definitely be a valuable resource for River Racing throughout the year. It’s pretty unique that we all have such different racing backgrounds, and I actually believe that will end up making us an even stronger team.

Earlier this year, you headed to Florida for some team testing at The FIRM (Florida International Rally Motorsports Park) to do your first training for rallycross—was that your first time racing anything all-wheel drive? What types of things were you focused on learning behind the wheel?

It was incredible! I probably turned 150 miles over 2 days working with Sean McDaniel and head instructor Bryn Walters. The FIRM is basically a gearhead’s fantasy with a full paved road course, skid pad, miles and miles of stage rally, a new eight foot tall jump and even a way to combine all of that into one epic rallycross training playground.

Since the River Racing car was still on its way to the US, I was driving the FIRM’s modified Subaru STI. Bryn, a rally driver himself, got me up to speed on the ways of rally and I have to say, my respect for rally drivers grew exponentially—I never realized how many different techniques there were to get a car to really dance in dirt. It was my first time doing things like using the handbrake and practicing rally techniques such as pendulum turns. My biggest focus was getting comfortable with how the car reacts in dirt and surface transitions.

From pushing limits on the skid pad to setting up a rallycross-specific course with dirt, pavement and jumps… I had an epic time training at The FIRM, and can’t wait to bring my River Racing GRC Lites car there!

Your interest in motorsport extends far beyond simply getting behind the wheel—you’re also working with Rothenberg Ventures/RIVER on their Partnerships team. Tell us more about that and how it incorporates into River Racing?

I’m an entrepreneur at heart, and have always pursued my racing career like a young company, which taught me a lot about business. I think entrepreneurs carry many of the traits needed to be a successful driver—hustle, resourcefulness, and a near-infinite reserve of tenacity. What’s great about Rothenberg Ventures and RIVER, is that they see this linkage in entrepreneurs across a wide variety of disciplines, and find the coolest ways to combine those disciplines (like shooting Virtual Reality video at my rallycross races).  I’m fortunate because I get to be a part of those projects, by contributing to a world-class team, finding new avenues to explore, and most importantly adding River Racing into the fold as—let’s call it the extreme sports side of the company.

Where are you looking forward to racing the most this year?

I’m really stoked to be racing in LA since it’s the closest to my home base of San Francisco, and we’ll have a lot of our partners there. Daytona will also be a big one for me personally since it’s home to my family, my alma mater, Embry-Riddle Aeronautical University, and also because I’ve done some open-wheel races there. And of course, what’s not to be excited about by Barbados!

Finally, what are your expectations for this season? Have you set any performance goals for yourself as a rallycross rookie, or is the priority getting comfortable in the car?

My expectations for year one are really to be a sponge, to learn as much as I can and really push myself. With such a talented field of drivers there’s no question that it’s going to be a challenge—especially heading into race one with limited seat time—but the best challenges have a tendency to bring out the best performances, so it’s a challenge that I welcome!

Image via The FIRM Rally School (4)