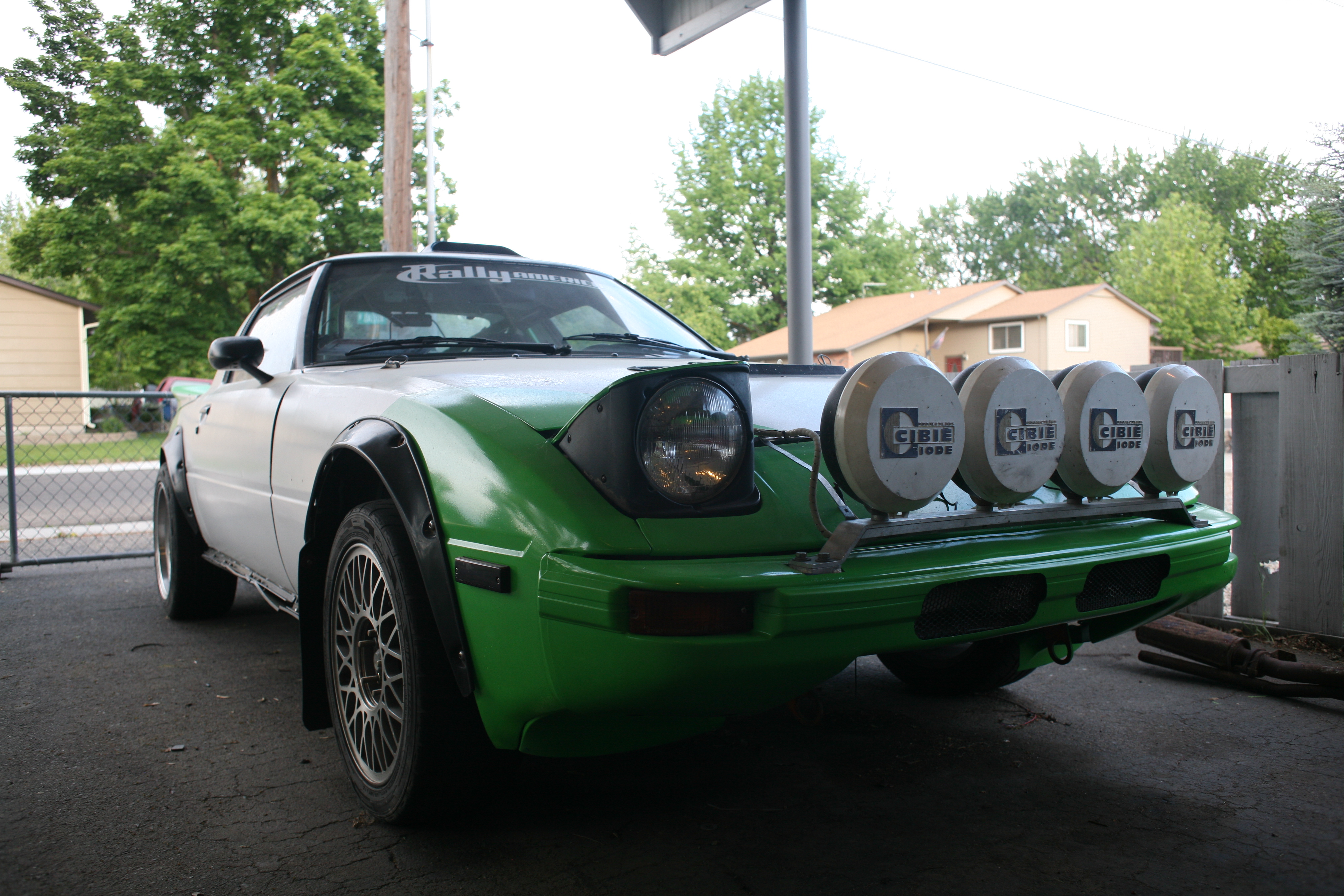 The story of RX-7 version 1.0 can be found here. This is the story of rally car version 1.5. We left off with a disabled car in the middle of the desert rally cross course. Once again, I had to take the car home on a trailer.

A rally car with a dead engine is a problem. Being a guy with budget constraints is also a problem. So cranking out another rotary that I would trust  more than 1000 miles from home at a  greater than 1000 dollar race, on my budget wasn’t going to happen. Doubly so since new 12A housings are NOS only. The other point you need to be aware of, is that up until this year, Rally America dictated that engines must be of original manufacture. This limited my options of alternative engines. After many sessions of drinking tea and staring at the car, I made a decision. A friend had excellent success with a Miata toting a Flying Miata turbo kit. It survived years of punishment without complaint and made far more power than I needed. Best part is, the engines are very inexpensive, but well engineered. All those Spec Miata guys can’t be completely wonky, can they?

For a few reasons, I went with the 1.6L engine. Primarily because I acquired the engine complete with a somewhat dated turbo kit off Craigslist for a steal. The plan was to run the car naturally aspirated until I had the coefficients to pop the turbo back on, since that too is a Rally America rule. Secondly, the 1.6 fit nicer than the 1.8 since its shorter. The radiator and fan was sourced from a Saab 900 turbo, the overflow from a Volvo. 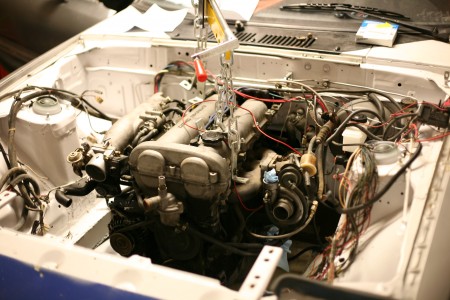 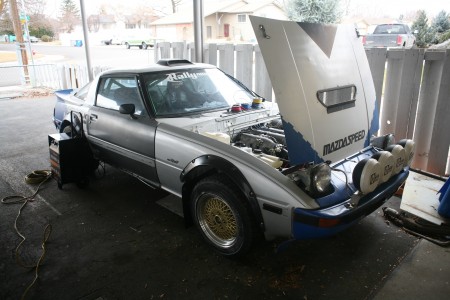 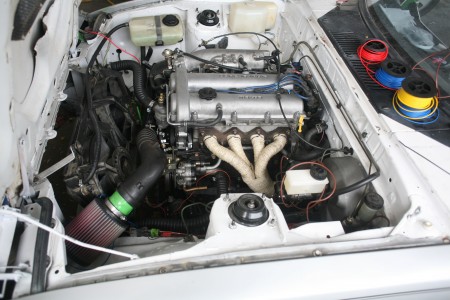 This was also a great time to address the wear on the old car, as well as the inadequacies of the first generation RX-7. Much of the body was foam, bondo, and dents. Thankfully, I had fenders and doors laying around. But the wear ran deep. A 12 inch crack in the floor from the links twisting the chassis gave some cause for alarm. Also the firewall was about 3/4″ from where it should have been. The car had not been stitch welded, so that was the perfect place to start. The car also was cleaned. At least 40-lbs of dirt came from the various nooks and crannies. Up until this point, the white and blue car was always “so and so’s” old car. Thankfully, I had access to a friend’s paint booth, and blasted it with tractor paint, keeping the pseudo-787B paint scheme with my own personal touch. Now it was my car.

The first generation front suspension and steering is a shade better than horrible. The steering is slow, the dampers are integrated to the hub (like every other car in that era), and travel was so-so. Thankfully, when Mazda designed the second generation car, they built the suspension on the first generation cars for testing. So the front subframe of the second generation fits easily (with welding) to the first generation chassis. Now the car sported the larger hubs and brakes, vastly improved steering (w/ power), larger aluminum arms, and mostly importantly, better dampers. I called up JVL in Washington, discussed rally politics, the socio-enonomic events of China in the early 1900s, and also had a set of 8″ 40-mm inverted Bilsteins made. The wider wheelbase, and the gain in caster required flares. Which was fine since the rear quarter panel was mostly foam anyway. I didn’t do much with the rear suspension except stick a set of 4.78 gears from the Kia Sportage in it.

The result was a vast improvement over the original car. Driving the roads once driven by Ver. 1.0 felt easy. The suspension handled both gravel and pavement wonderfully. The steering was instinctual. Everything was better, except the engine. It seemed too damn slow. Sadly, the car never made it to any of the local rally crosses nor rallies since I was deployed for a period of 6 months. Instead, I muddled about with it on the dirt and paved roads to get the feel of it. 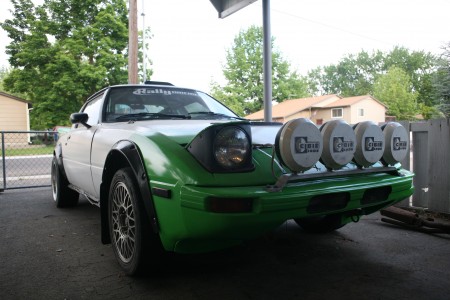 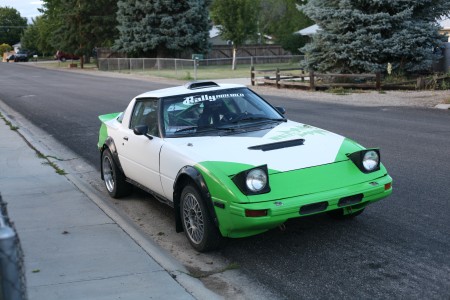 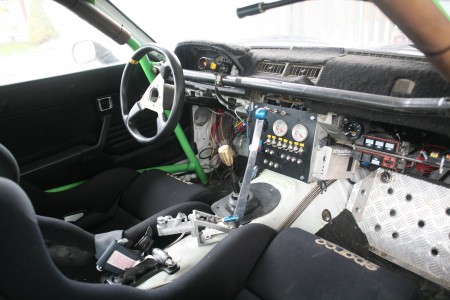 Then something….less than ideal….happened. It became my daily. I had sold my Audi ur-S6 in preparation to move to California where it would never see legal registration. But the military promptly shifted my leave around such that I was stuck in Idaho for a few more months. The only running car I now had was the rally car. Better still, I worked 1-1/2 hours away from Boise. So, I found myself daily driving the car. This actually was a great bonding experience. Aside from the looks you get from driving a white / bright green car around (and through military gates), the car did quite well. The fuel economy was better than I expected since it was a 1.6. As rally cars are required to be road legal, all that important stuff like blinkers and headlights worked just fine. It always started, drove straight, and got me where I needed to go. Racing seats also allow for excellent stacking of groceries without the sliding around experience by lesser modes of transportation. All told I daily drove the car for 86 days, driving around 7000 miles. 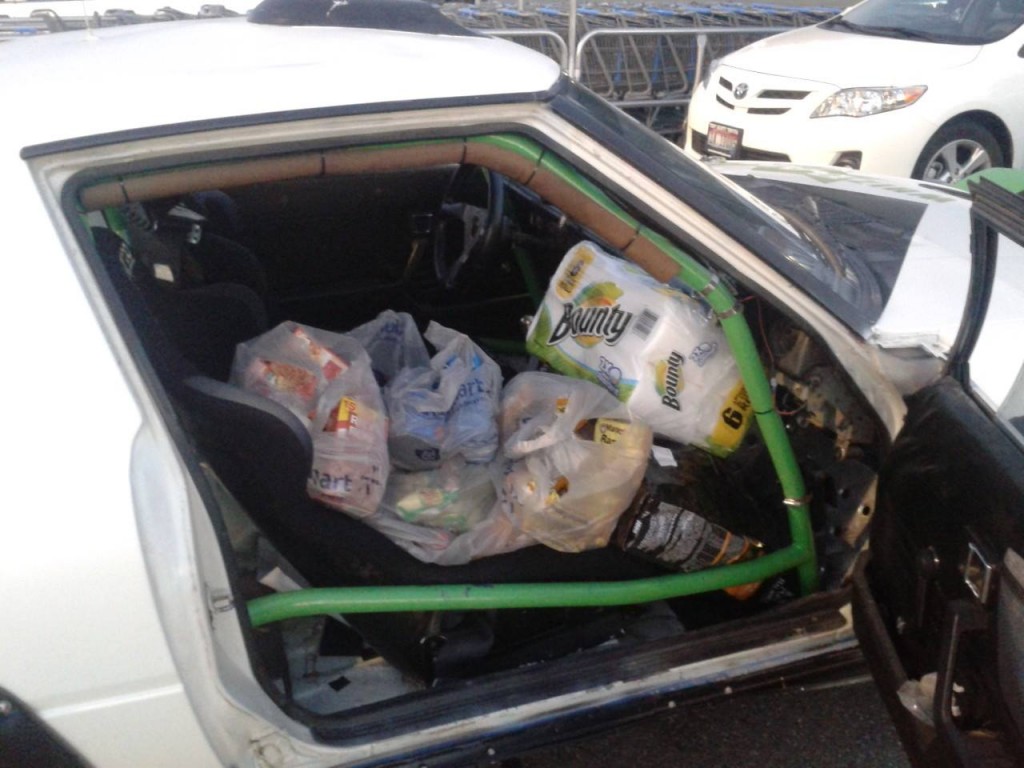 For the longest time the car seemed under powered. And not “its a Miata 1.6” under powered. I mean “under powered for a B6 engine” under powered. Coupled with the issues of running hot, I decided to take the head off to replace the head gasket. The head gasket was fine. Instead, the cylinder walls looked like they had been assault by Freddy Krueger. Crap. I had to move to California in less than a week and the engine was beyond toast. Once again, I made tea and starred at the car. I would not be able to make another trip from California for it, and I had no where to keep in Idaho long term. If I reassembled the engine, there was no guarantee it wouldn’t wind up stuck in Nevada on the side of a road. I also didn’t have the funds nor time to replace the engine. Instead I decided to dissemble her and brings the along parts of value. Here is why.

In short, safety was my concern. Reflecting on it, I am glad that I went this direction with. She had earned her retirement. The shell now supposedly sits on display atop a small scrap yard in Idaho, because the owner thought I was too cool to recycle. Much of this car found its was into RX-7 Rally Car Version 2.0, which carries the rally torch today.