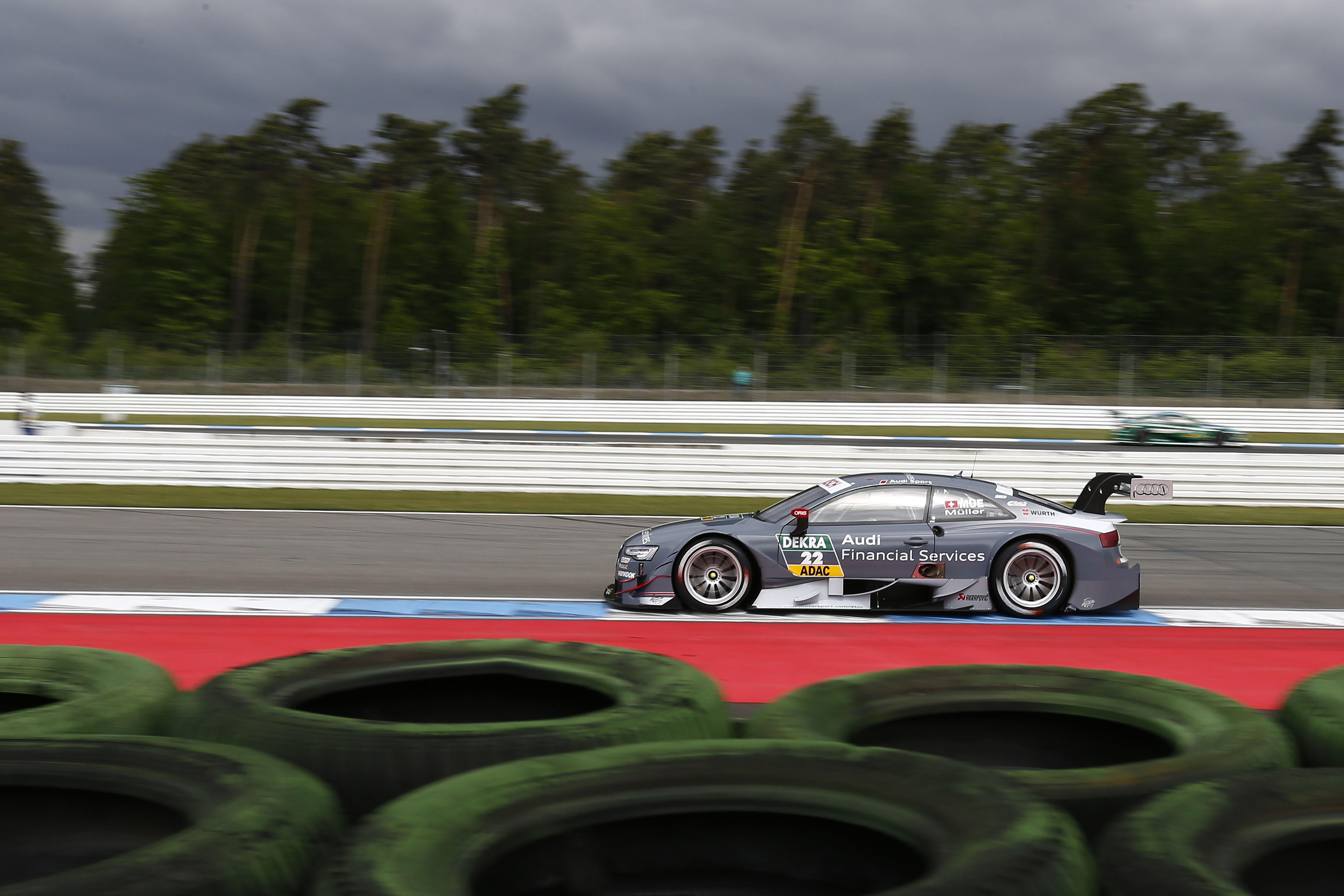 Next weekend (May 16 to 18) the DTM is entering its next round at Oschersleben near Magdeburg. The DTM season opener at Hockenheim gave a good foretaste of what the fans can expect this year: thrilling action until the chequered flag is waved, door-to-door duels for positions and extreme competitiveness of the drivers at the front of the field. 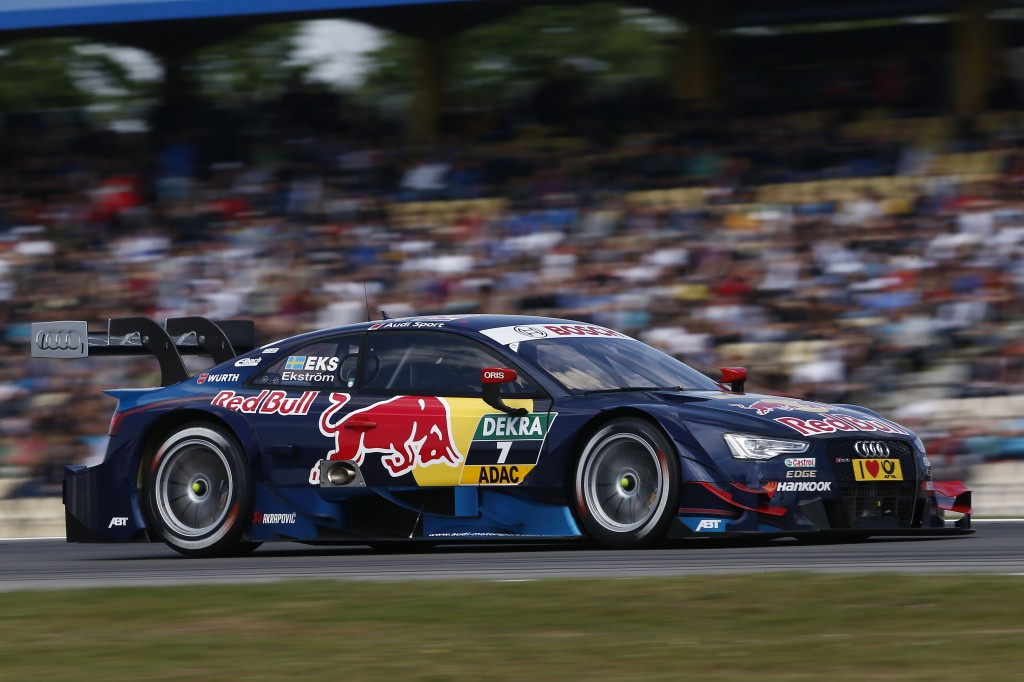 Events in the DTM are following each other in quick succession. The first three races are held at two-week intervals, with the 3.696-kilometre track at Oschersleben marking the next stop. While aerodynamic efficiency at high speed played a crucial role on the long straights at Hockenheim the fast turns and chicanes of Oschersleben primarily call for downforce. Taking short-cuts across the curbs challenges the drivers to be careful in the process and the engineers to provide a perfectly set-up car. 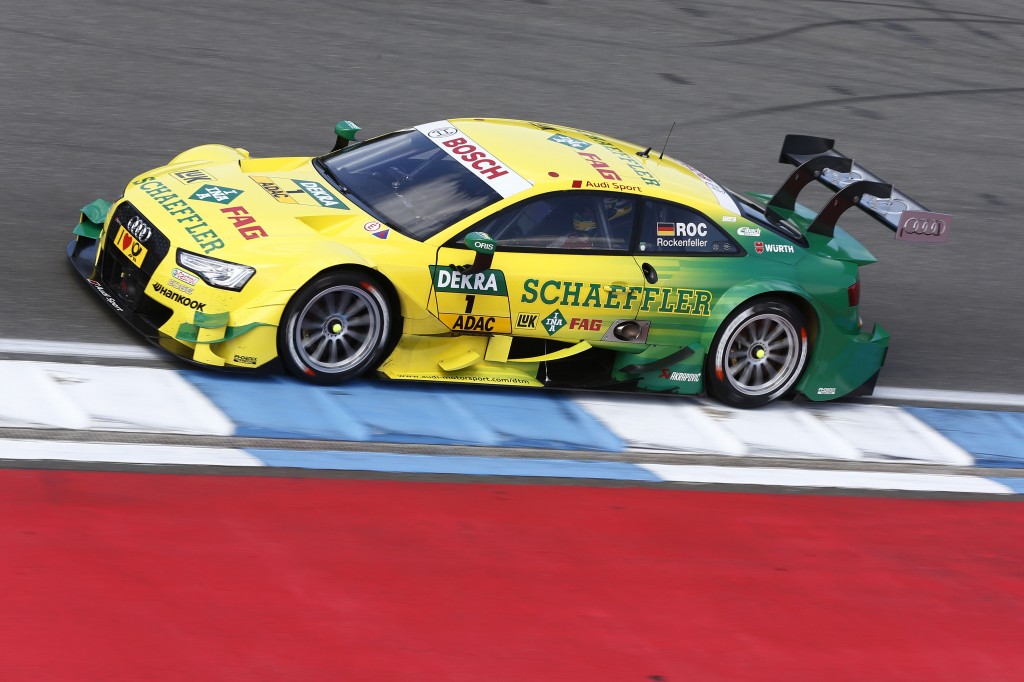 The Audi squad managed both feats on many occasions in the past. Five times an Audi driver has won the round on the circuit near Magdeburg. Mattias Ekström most recently clinched victory there in 2011. In 2013, all eight Audi RS 5 DTM cars finished in the top ten and thus in the points at Oschersleben – marking a premiere. So it comes as no surprise that several drivers have special memories of the circuit. Timo Scheider celebrated his first-ever DTM success there, Champion Mike Rockenfeller his first podium finish in his debut year of 2007 and newcomer Jamie Green, on clinching the pole position and a podium place last year, showed that he had finally arrived at Audi. 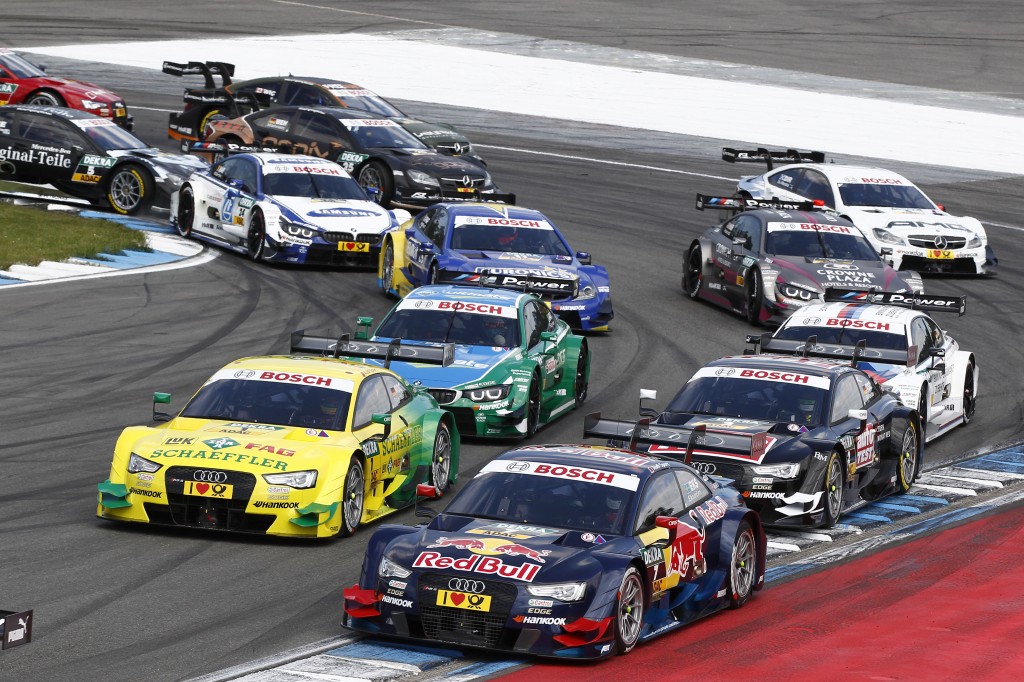 In 2014, Audi is traveling to Oschersleben with tailwind gained from a pole position and the two podium places by Mattias Ekström and Adrien Tambay. Four drivers in total finished in the points at the Hockenheim season opener. With six Audi RS 5 DTM cars in the top eleven Audi had previously managed a strong start of the season in qualifying. 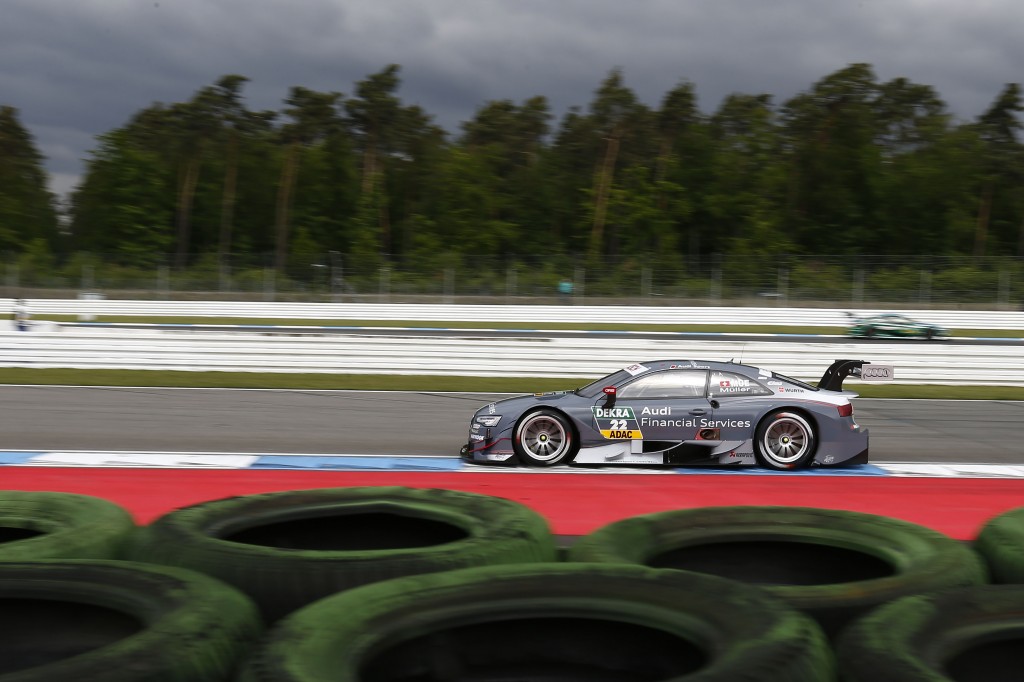 The circuit at Oschersleben is an institution in the DTM and was on the calendar back in 2000 when the DTM made its comeback. The notorious, tight left-right combination at the end of the start-finish straight makes for thrilling action especially at the start and provides good overtaking opportunities throughout the race. The fast triple left-hand turn in the first section is particularly popular with the race drivers. Ideal for the fans is the fact that several grandstands offer a view of this section as well as the whole infield, which means that they will not miss out any of the DTM on-track action.

‘Das Erste’ airs live broadcasts from Oschersleben on Saturday and Sunday. Tickets for the 2014 DTM can be purchased online at www.audi-motorsport.com/dtm or by phone on +49 (0)841 8947777. 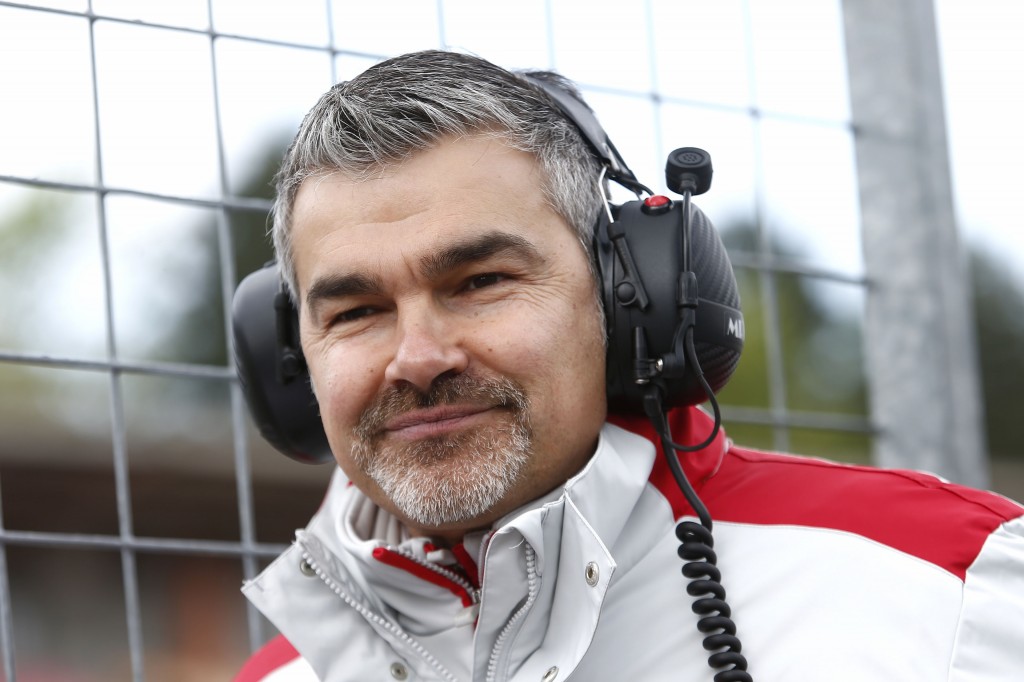 Dieter Gass (Head of DTM): “Oschersleben forms a clear contrast to the opening event at Hockenheim because this circuit has completely different characteristics and makes different demands on the set-up of the car, so it’ll be another interesting assessment of where everybody stands at the beginning of the season. We’ll be arriving at Oschersleben with a good result packed in our bags, are looking forward to the race and are confident that we’ll be able to continue our performances from Hockenheim.”

Hans-Jürgen Abt (Team Director Audi Sport Team Abt Sportsline): “We’re trying to take the positive mood from the season opener with us to Oschersleben. We learned a lot about our new car on the first race weekend so that we can prepare even better now. We saw how strong the competition is – and that won’t be any different at Oschersleben either. Still, we’re aiming to get on a roll and to immediately up the ante with good results.”

Ernst Moser (Team Director Audi Sport Team Phoenix): “Since Hockenheim, if not earlier, we’ve known that we’ve got a good base and that our two guys are in good form. It’s great that the action is now continuing at two-week intervals. The track always suited Audi pretty well in the past and that obviously heightens our eagerness to race there.”

Arno Zensen (Team Director Audi Sport Team Rosberg): “We’ve got to get past the misfortune at the season opener as quickly as possible and look ahead. We know that our car and our two drivers have got the speed – now we just need to put it on track as best we can.” 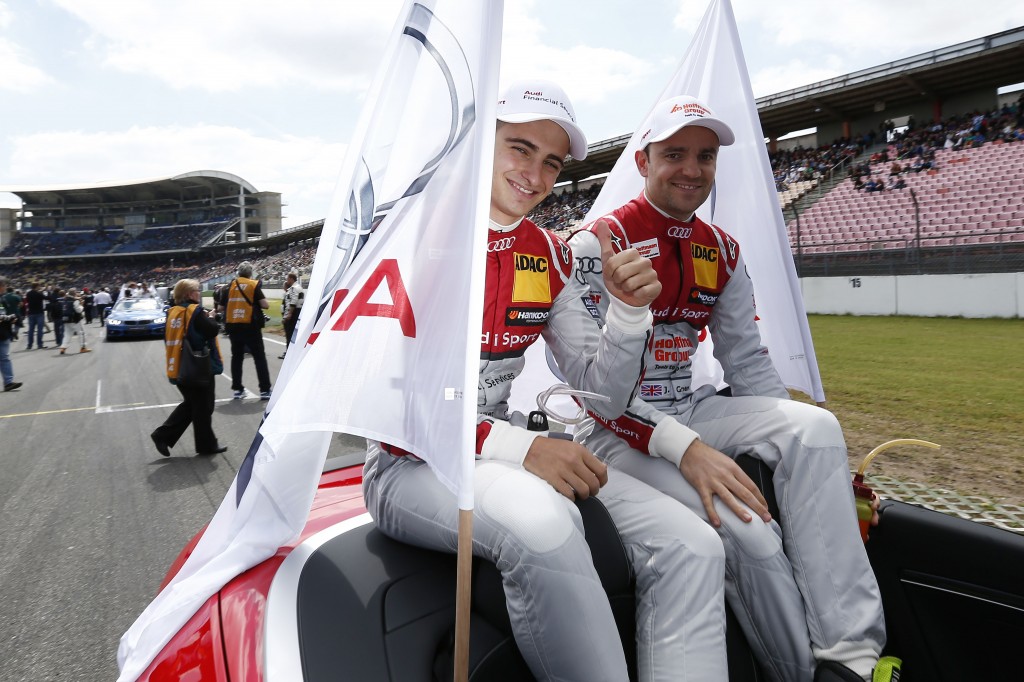 Facts and quotes by the Audi drivers

“Oschersleben has a unique atmosphere with many loyal friends and a track with a good view that is particularly attractive for the visitors. I’m happy that we’re quickly moving on to the next race. While we scored a good result at Hockenheim, we also know all the things we can still improve on.”

“I’ve got fond memories of last year at Oschersleben when I clinched my first pole position and first podium result for Audi. Obviously, my dream is for the first victory to follow soon. But after a difficult opener at Hockenheim even a place in the top six would be a good result for us.”

“With our performance in qualifying as well as in the race we gained a lot of self-confidence at Hockenheim – even though we haven’t achieved a result in the points yet. We want to rectify this at Oschersleben.”

“Oschersleben will be seeing a thrilling race. Audi achieved several good results there in the past. The Hockenheim opener makes us feel optimistic although there are still a lot of things we’re able and going to improve.”

“Oschersleben is a completely new track for me because I’ve never raced there before. Although I’ve experienced my first DTM weekend now there’ll again be many new experiences. I’ve already learned quite a bit, so I’m confident that things will be going even better at Oschersleben.”

“Oschersleben is a track I really like and that’s a lot of fun to race on. So it’s great that it’s the second race on the calendar this year. I’d like to repeat everything we did well at Hockenheim and simply skip the things that weren’t good. Then we’ll have every chance of being in contention again.”

“At Oschersleben, I scored my first DTM victory and became Champion for the first time in the same year. So I’ve got many fond memories of the track. I also held the lap record for a long time and think that with this powerful car the time has come to recapture it.”

“In the DTM, you can’t be happy about a successful weekend for very long. The pole position and the podium at Hockenheim have long been ‘ticked off’ because the game starts all over again at Oschersleben. So we’re just taking the great emotions from the opener with us and are going to attack again at Oschersleben.” 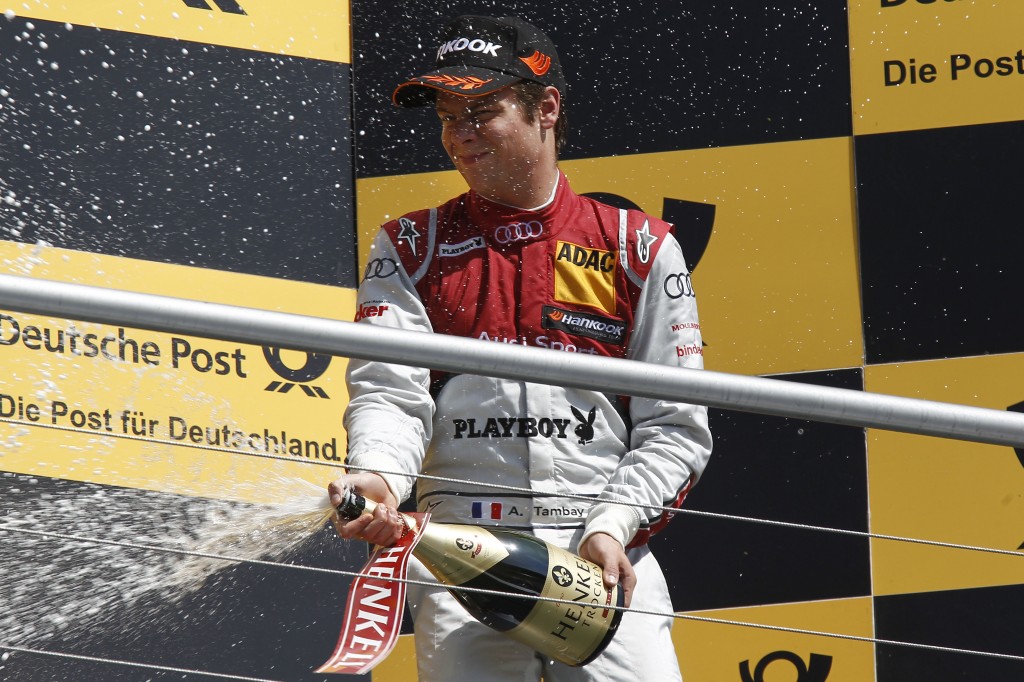 All Oschersleben winners since 2000

With a second place at Oschersleben Mike Rockenfeller made another big step towards clinching the champion’s title. Before the last two races at Zandvoort and Hockenheim the driver of Audi Sport Team Phoenix had achieved an advantage of 33 points over Augusto Farfus. 70,500 spectators saw another impeccable race of the driver heading the leaderboard on the track near Magdeburg and an impressive showing by the whole Audi squad. All eight Audi RS 5 DTM cars finished in the top ten and thus in the points – marking a premiere.