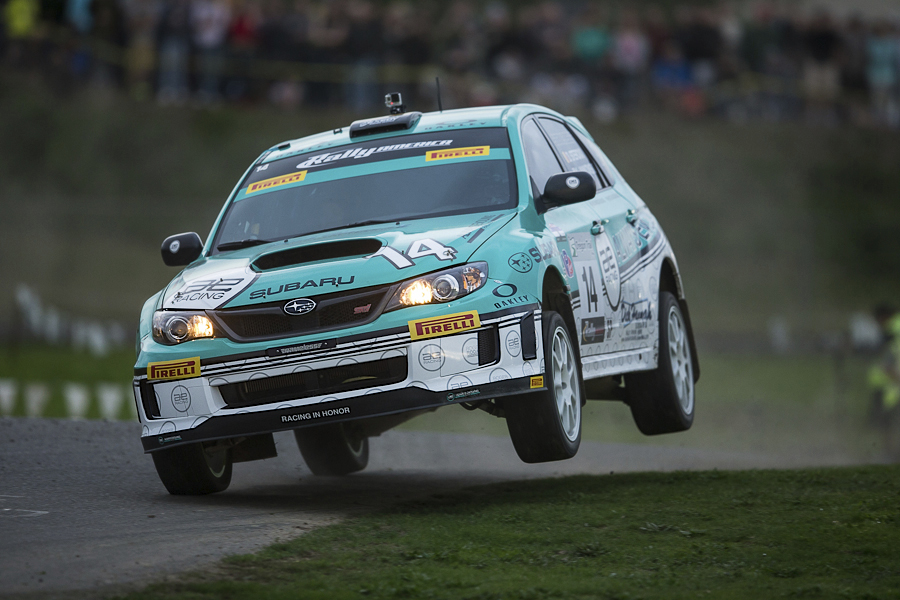 Driving their Always Evolving-sponsored 2011 Subaru STI, Sterckx and Jankowski beat the team of Dillon Van Way and Andrew Edwards by a slim 7.4-second margin. The battle came down to the very last stage withVan Way and Sterckx fighting back and forth for the class lead allweekend. Ultimately it was Sterckx’ surge in the rain of the last stage that earned his first victory this season and Always Evolving Racing’s first victory in rally racing.

“We had dust issues and chicane penalties early in the rally,” said Sterckx, “But we decided to push harder for the win, there was no other option. We won the last four stages, and we went faster in the rain than we did in the dry last year at Oregon. We made up two seconds per mile on the final five mile stage to close the 7 second gap to Dillon.” Sterckx noted the contributions of the crew – Don Jankowski, Otavio Reis, and Keene Brubaker – in preparing the Subaru.

Meanwhile, the Always Evolving team is nearly finished repairing both of the team’s Boss Mustang 302’s and is anxious to get back into the GTS-class championship chase. The team will compete at the next Pirelli World Challenge event – The Chevrolet/Cadillac Grand Prix of Detroit – May 30ththrough June 1st.

Always Evolving Racing launched the rally effort as part of a planned expansion of Always Evolving Racing’s operations and as a way to capitalize on Sterckx’ championship pedigree in rally racing. “This is a significant milestone for AE Racing with our first victory in rally racing and our first victory in any racing class for the 2014 season,” explains team owner and driver Erik Davis. “We are very excited to take a little momentum and good luck into Detroit for the next World Challenge race.”

Always Evolving Racing is a professional motorsport team based in Los Angeles. The team was founded in March 2013 by friends Roger Rodas and Erik Davis as a platform to combine their passion for cars and their desire to support their favorite charitable organizations. Following Rodas’ tragic passing in November 2013, the team has established “Racing in Honor” as their internal mission for the 2014 season in his memory.