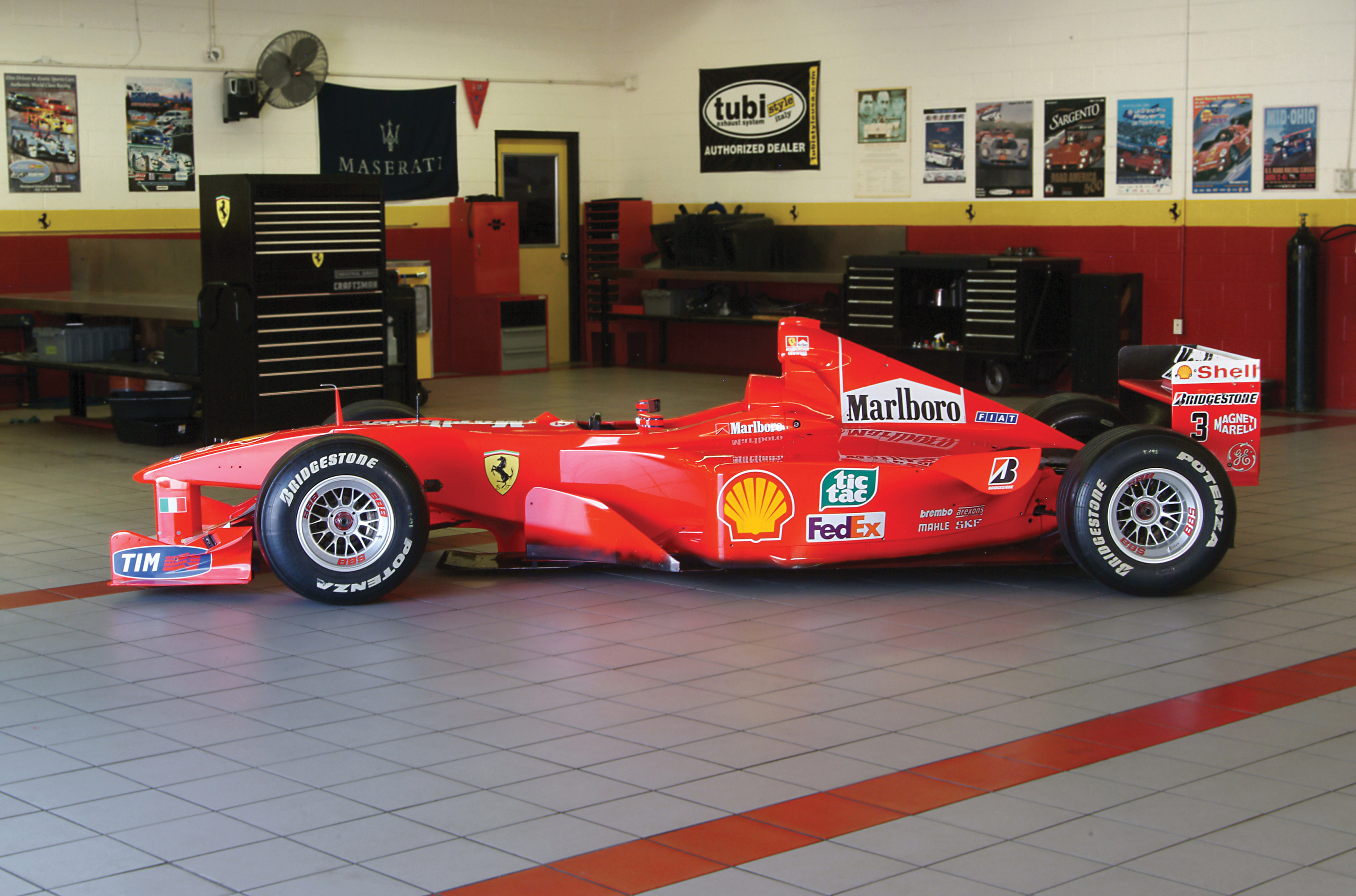 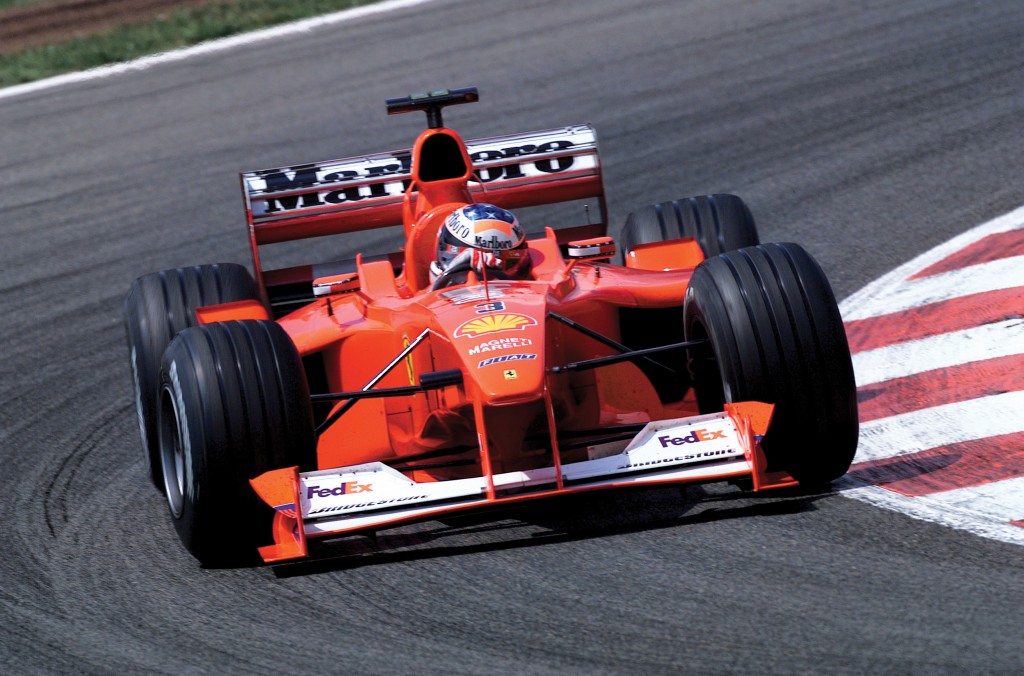 At the start of the 2000 Formula One season, Technical Director Ross Brawn said, “I think we’ve probably had the best car we have ever had at the beginning of the season since the present group has been working together here at Ferrari.” With team principal Jean Todt at the helm and drivers Michael Schumacher and Rubens Barrichello, the Ferrari dream team were starting their fourth year together and looked as if they could at last be in a position to win the World Championship, a feat that they had not accomplished since Jody Schekter won 21 seasons earlier in 1979. 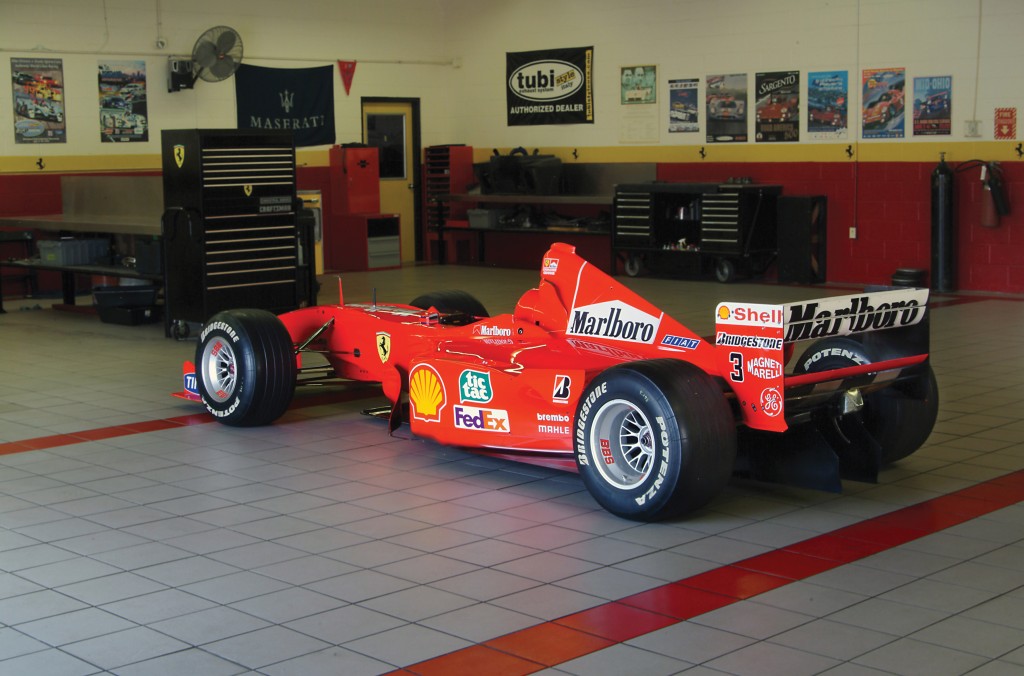 Ferrari’s Formula One car for 2000, the F1-2000, was a completely new design. Utilizing a 90-degree V-10 instead of an 80-degree enabled Ross Brawn’s technical team to lower the center of gravity of the car and spend a great deal of attention on the aero package, which was substantially improved. For the first time, the Scuderia believed that they really had a strong chance of taking the fight to McLaren right from the first Grand Prix. 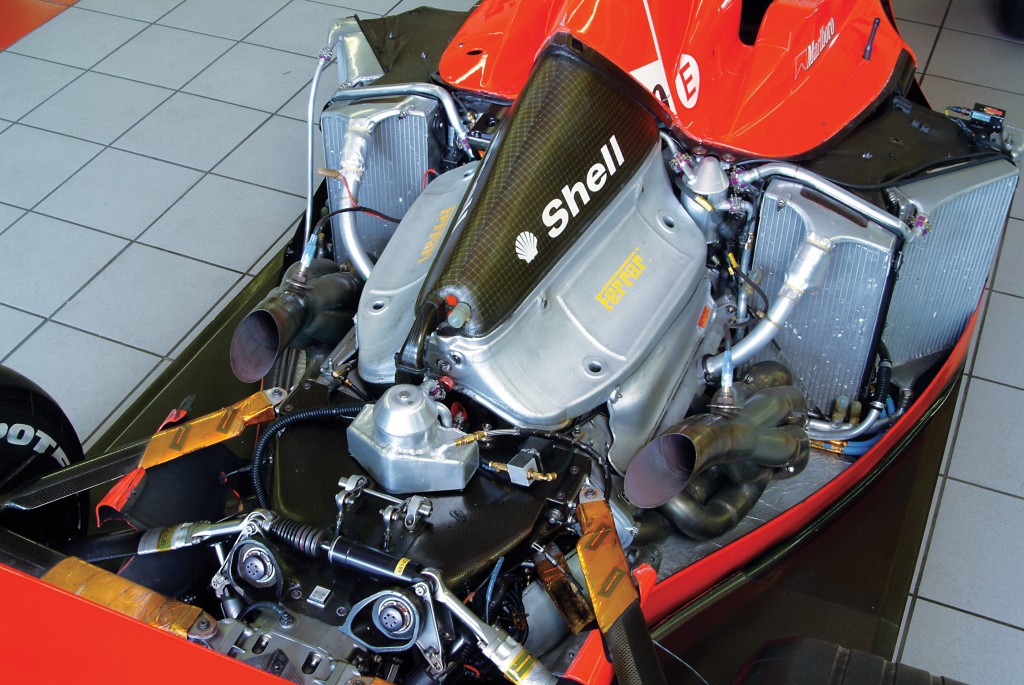 They were right. Schumacher took the checkered flag for the first race of the season in Australia, once more in Brazil two weeks later, and yet again at San Marino the following round of the championship. The Imola race was won, thanks not only to Schumacher’s sublime driving, but also to pit stop tactics for which Brawn had gained such an exemplary reputation. “Michael paced himself beautifully in order not to alert Häkkinen too much,” Brawn said. “Then as soon as Häkkinen was in the pits for a second time—bang!—Michael did the business. It was a race we won which they should have won thanks in part to that longer middle stint and in part to Michael putting in the fast lap times at exactly the right moment.” 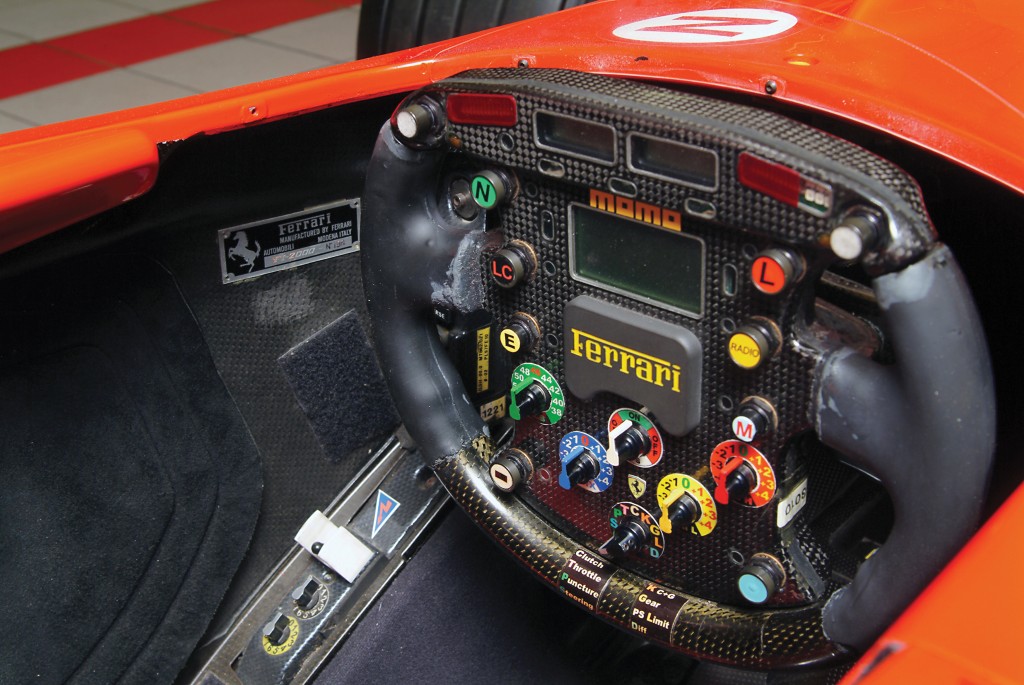 However, Ferrari was not to have it all its own way. Midway through the season, Schumacher had a lead of 22 points, but after a series of non-finishes, by the Belgian Grand Prix at Spa he was tailing Häkkinen by six points. The fight back was about to begin. Schumacher won at Monza and yet again at Indianapolis. Victory at Suzuka in the Japanese Grand Prix meant that Ferrari and Michael Schumacher had clinched the World Championship; after 21 seasons and more than 340 races, Ferrari was back on top and the start of its domination of Formula One was about the begin. Schumacher had taken nine victories in 2000 and three further podiums. 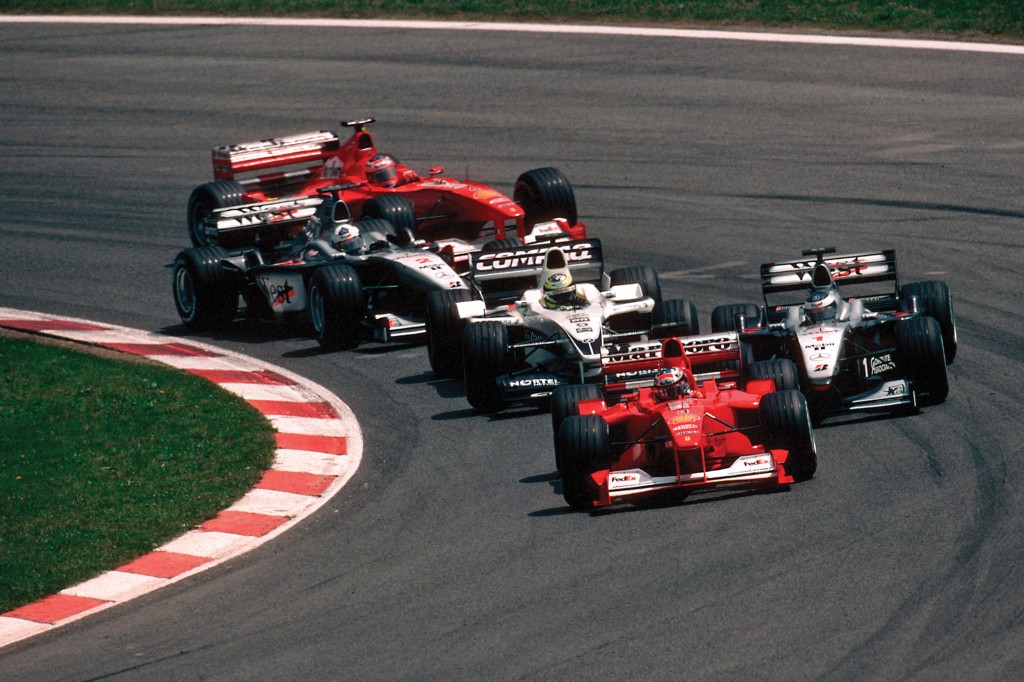 Chassis 198, the car presented here, was used as the team’s spare car throughout much of the season and was raced by Michael Schumacher twice. During qualifying at Interlagos for the Brazilian Grand Prix, Michael ran wide, badly damaging the underside of his race car, and he switched to this car. He qualified third on the grid. During the race, he battled with Häkkinen for the lead, Ferrari running a two-stop strategy to McLaren’s one-stop. In the end, it was an easy cruise to victory for Schumacher. Häkkinen’s engine blew up, and David Coulthard, in the second McLaren, was disqualified due to excessive wear on his front wing end plates. 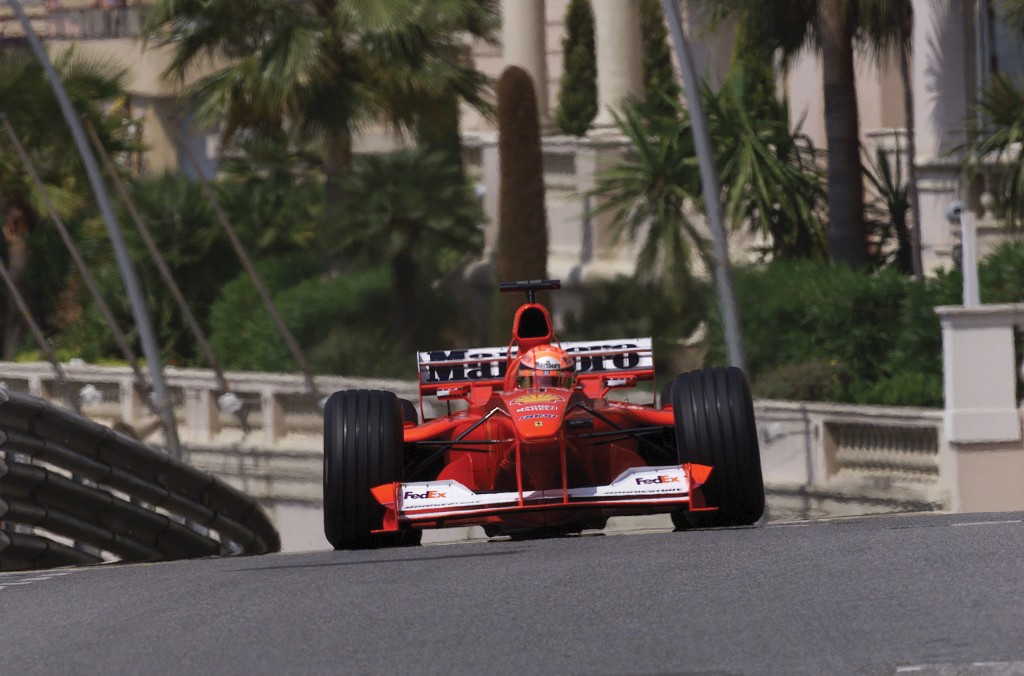 Schumacher was ecstatic after the win, his second straight win from the start of the season. He said, “We made an obvious improvement to our starting strategy, I was able to catch Mika but I didn’t want to take a risk too soon and of course he was not keen to let me pass. I enjoyed our battle—it’s been a long time since there was a good fight and overtaking for the lead.”

Schumacher found himself behind the wheel of chassis 198 at the Spanish Grand Prix at the Circuit de Catalunya on May 7th. Schumacher qualified on pole position for the first time in the 2000 season (his 24th career pole). Michael led much of the race but a problem with the refueling nozzle and then a slow puncture dropped him back. He finished fifth. Chassis 198 would be driven by Schumacher yet again at the famed Monte Carlo Grand Prix, but he did not finish due to a broken pushrod. 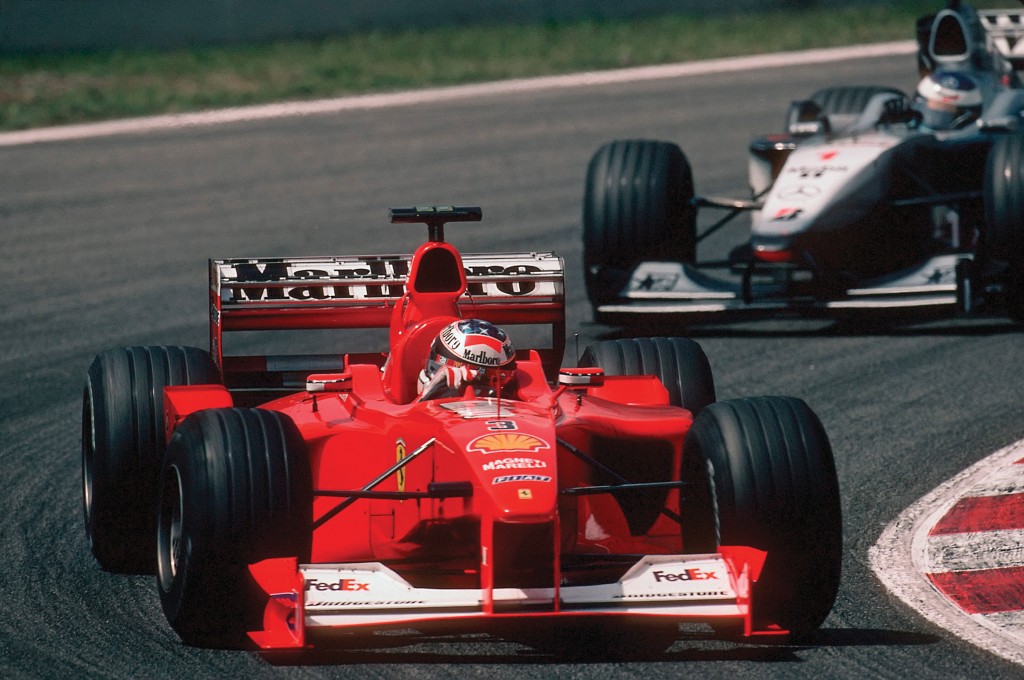 Having taken both the Driver’s and Constructor’s Championships, the President of Ferrari, Luca di Montezemolo, spoke of the team’s technical strengths and solidarity created by Jean Todt: “The results are down to a group which we would like to keep unchanged, they are all linked by a common denominator, a passion for Ferrari, which is unique in the world. We have been at the top level for several years and we did not always get what we deserved. We can only try to be the best. I would also like to recall the great difficulties we had to overcome and the criticism, which often rained down on us. I often tell my colleagues that Ferrari would not be what it is without its critics. We are always a reference point, which is the destiny of the very best. We must not waiver in our duty, which is to keep winning.”

Following its professional retirement, chassis 198 was rebuilt by the factory for future use in F1 Clienti events and would be an excellent acquisition, as it is symbolic of both Ferrari’s return to domination in Formula One and the start of Michael Schumacher’s iconic run with Ferrari to five World Championship titles.