Rockstar Energy Drink driver Tanner Foust showed good speed in what was ultimately a tough-luck weekend at the Barbados round of the Global Rallycross Championship. 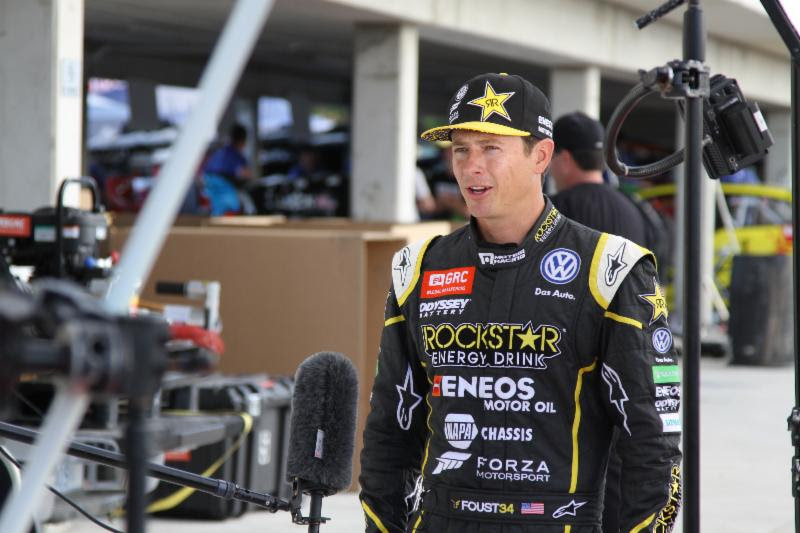 “It was a great start this season with the new team — Volkswagen Andretti Rallycross has put together a strong car for us and we were at the top of the time sheets all weekend,” said Foust. “But the third-round heats weren’t kind to me and my luck never came back around.” 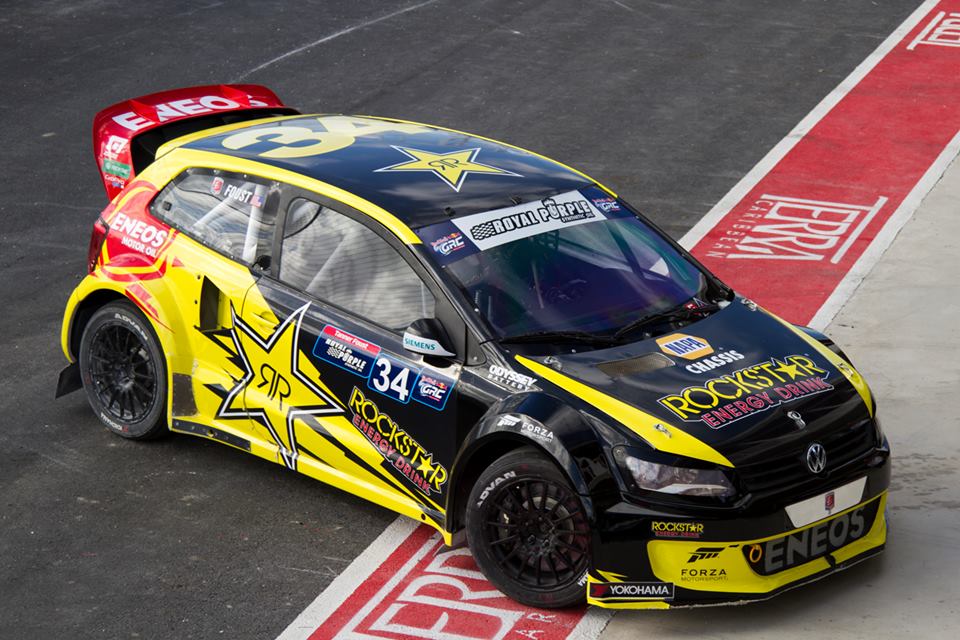 Foust opened the Red Bull Global Rallycross season in a Volkswagen Polo based on the chassis developed by Marklund Motorsport. The Volkswagen Andretti Rallycross team is working on the brand new Rockstar Energy Drink Volkswagen Beetle, a 560 horsepower turbocharged rallycross car that is expected to debut in competition later this year. 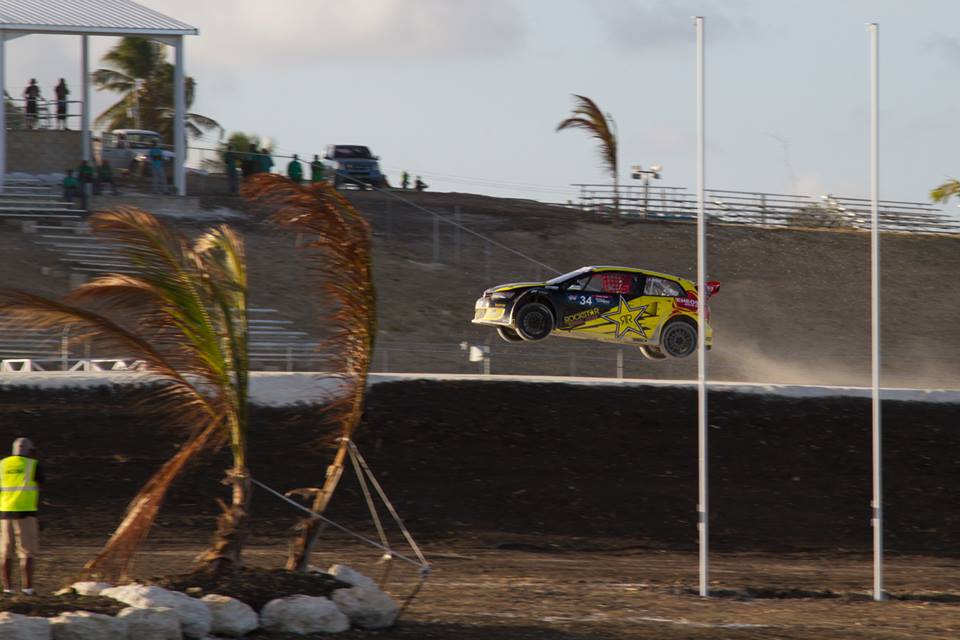 The two-time GRC champion was an early favorite for the podium this weekend. In his opening heat he lived up to his reputation as one of the fastest starters in the series, taking the holeshot and holding a big lead throughout the six-lap race. In his second-round heat, his rallycross experience shone when he made a strategic dive for the Joker lap on the last lap to steal the win from rival Ken Block. 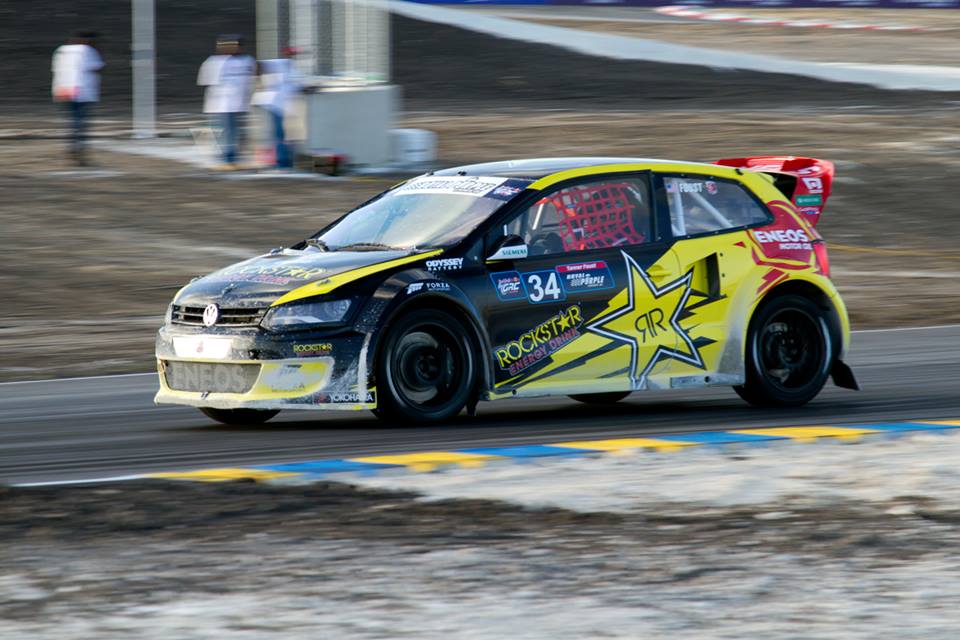 But in the third heat his car sustained damage on a hard landing on the 70-ft jump feature, prompting a red flag when some bodywork came loose and wound up on the track. The race was called, and he was forced into the unusual position of racing the Last Chance Qualifier.

After a strong start in the LCQ, Foust looked like he might become the comeback story of the day. He was leading the pack until he became the first of two drivers this weekend to accidentally take the Joker lap twice, prompting race officials to award a 10-second penalty that knocked him out of contention for the Final. 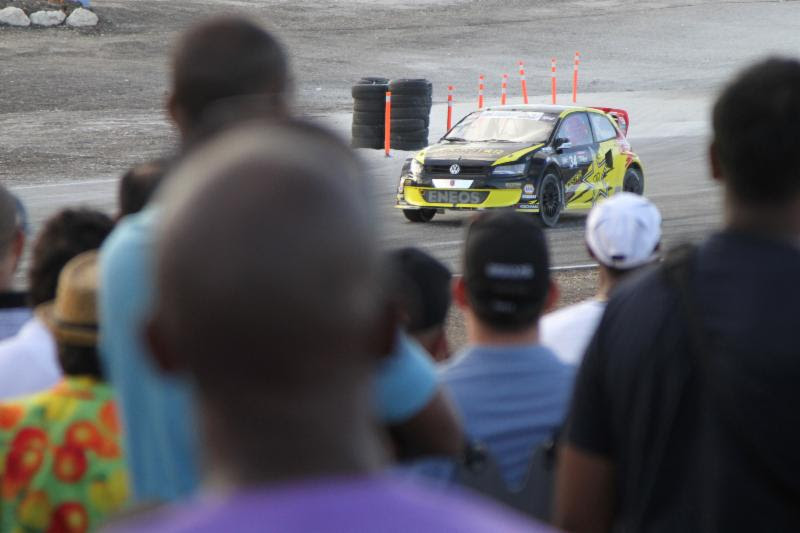 “In the intensity of competition, when you’re racing another car and focusing on watching their lines, having that car ahead of you dive into the Joker lap can take you by surprise,” said Foust. “I was racing hard and by the time I realized I hadn’t made the turn for the regular lap, it was too late.”

It was the first time in Foust’s GRC career that he has not qualified for the Final.

“The great thing about this weekend was racing with my new team for the first time.” said Foust. “Congratulations to my teammate Scott Speed for pulling through for the win for us. The Volkswagen Andretti Rallycross team is going to be tough to beat this year.”

Next weekend, Foust travels to the Lydden Hill Race Circuit in the UK to join Marklund Motorsport for the World RX of Great Britain May 24 and 25. There, he will attempt to make it three in a row after bringing home race wins in both 2011 and 2012.

The race this weekend was held in conjunction with the Top Gear Festival, which saw Foust, one of the hosts of Top Gear USA, take part in a number of additional appearances — including a drag race with Top Gear host James May in a tractor. The Sunday race was sold out, with an estimated 20,000 fans in attendance over two days of competition.

Rockstar Energy Drink is designed for those who lead active lifestyles – from Athletes to Rockstars. Available in over 20 flavors at convenience and grocery outlets in over 30 countries, Rockstar supports the Rockstar lifestyle across the globe through Action Sports, Motor Sports, and Live Music. For more information visit: www.RockstarEnergy.com

He has also held multiple world records including for the astonishing Hot Wheels Double Loop Dare, which saw Foust drive a car through a 66-foot loop-the-loop. He also scored the indoor speed record for TV’s Top Gear USA, and set a distance jump record with Hot Wheels when he made a 332′ ramp-to-ramp leap in a truck at the Indy 500.

His varied race experience includes multiple years of open wheel competition, the Pikes Peak Hill Climb, rally racing, various types of sports car racing and the SCORE Baja. He has represented the USA in the annual Race of Champions three times, teaming with NASCAR star Carl Edwards in 2008, Travis Pastrana in 2009, and Mick Doohan in 2010.

A year after making his overseas debut in the European Rallycross Championship in 2010 with a select campaign, Foust became the first American driver to win a round of that championship and finished both 2011 and 2012 ranked in the top three; he won two of the three rounds he entered last year. At home, Foust has been a dominant driver in rallycross since it was first introduced to the United States in 2010.

When he isn’t racing, the professional driver also performs in films and on television. He is an on-air host for the U.S. version of the seminal BBC auto show Top Gear, produced by BBC Worldwide Productions and airing on the HISTORY channel. Episodes of his online documentary series, Life in the Foust Lane, are available on the Rockstar Energy Drink YouTube channel.

Foust also handles stunt driving in numerous popular films, TV shows and commercials. He is featured as a stunt driver in the upcoming Need 4 Speed film, as well as other major releases including the Bourne Legacy, Bourne Ultimatum, Fast and Furious: Tokyo Drift, Dukes of Hazzard, Red Dawn and Iron Man 2 movies.