The rough tang of racing fuel provides a sharp contrast to the tropical fragrances of the local flora here in western Java. The Super Trofeo is the manifestation of Lamborghini’s driver-oriented motorsport strategy, which unites the gentleman drivers competing on tracks across the world. Though drivers may feel somewhat comfortable and accustomed to this once-virgin track, this Sunday nevertheless held a few surprises for gentleman drivers and race fans alike. 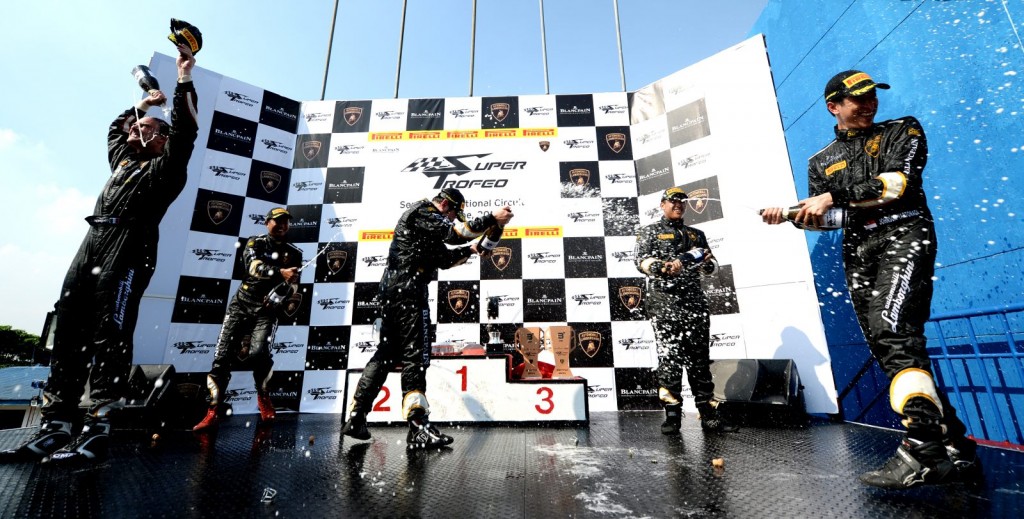 Each day of this race weekend had a special event. Yesterday’s opening race closed with a gala dinner attended by drivers and race officials. If yesterday’s event was a feast for the taste buds, then today’s event was a feast for the eyes. At noon today 51 Lamborghinis gathered at the Sentul International Circuit for a record-breaking car parade, the largest ever assembly of a single brand of sports car in Indonesia.

Unlike yesterday’s intense and uncertain atmosphere – a new track, a new climate, and many new drivers – the atmosphere Sunday was much more relaxed, with the sun shining brightly, drawing out the myriad colors of the assembled Lamborghinis owned by local Indonesians. Racing fans from across western Java turned out in droves for the car parade. The aggressive coloring of the Lamborghinis on display reflected the exclusivity and Italian aura that is a critical component of the Lamborghini brand. The other critical component of this brand, of course, is Lamborghini’s racing soul.

Speaking during media interviews yesterday, Cristiano Inverni, Lamborghini Blancpain Super Trofeo Asia Series Coordinator, described racing as essential to the Lamborghini brand. Lamborghini as a company was built in response to the challenge to create the world’s greatest car. The racetrack is the test furnace through which new Lamborghini concepts must pass. 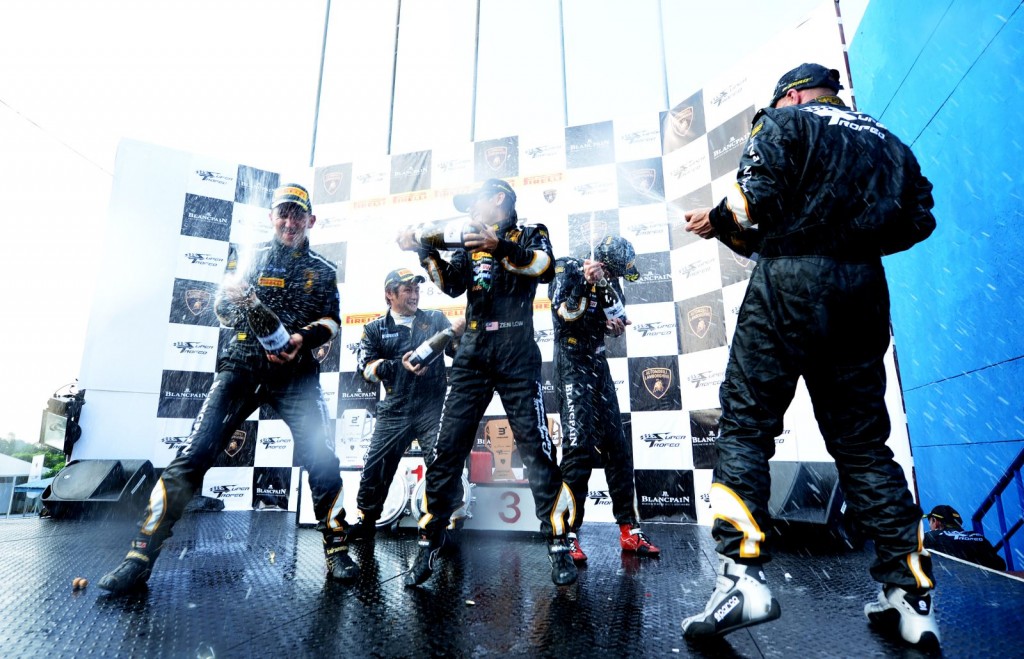 The concept of rigorous testing is not unique to Lamborghini; Swiss timepiece manufacturer Blancpain, who together with Lamborghini co-sponsor the Super Trofeo series, also maintains a tradition of rigorous quality control and precision manufacture. Blancpain watches of multiple makes and styles were on display at the many pavilions set up at the Sentul International Circuit.

On display was the extensive aerodynamic profiling and severe styling auto enthusiasts have come to expect from Lamborghini. Also visible – through a transparent glass cover – was Lamborghini’s naturally aspirated engine and power train. The cars, all owned by local Indonesian drivers, paraded around the tight corners and short straightaways of the Sentul International Circuit for an hour before the beginning of the race. This parade of bulls culminated in a line-up along the starting places. 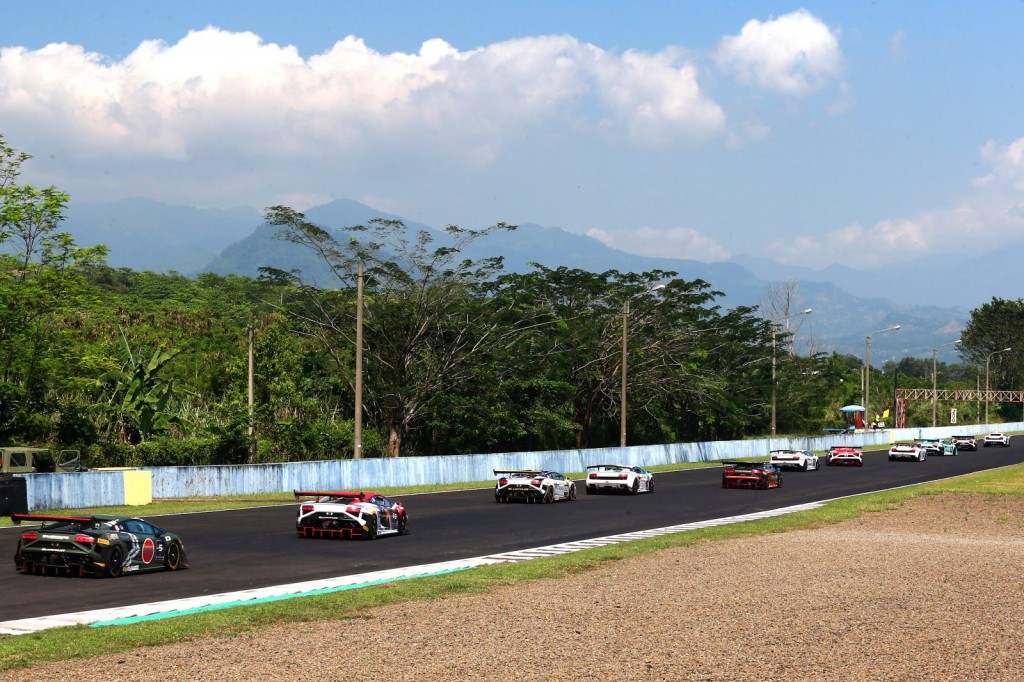 After the local streetcars had vacated the starting line-up, the racecars took their place. Ochiai in car #12 started first today, owing to his performance in the qualifying and first races yesterday. Though out in front for the first few laps, he was pursued doggedly by car #9, with both vehicles adhering closely to the “line,” no small feat for this shorter-than-usual track. Garbagnati in car #6 pursued both leaders, but was unable to get around #9 for the first half of the competition. This aggressive racing was slowed down by yet another early yellow flag, following much the same pattern as Saturday’s race. Yet another early yellow flag prohibited passing for the first few laps. Car #5 and #8 took advantage of the slowdown to make pit stops, with #8 backing all the way into the pit.

Despite starting in fifth position, car #16 (Haryanto & Eri) made impressive gains early on, overtaking everybody but car #9 and car #12 only 10 minutes into the race after the yellow flag had been withdrawn. At 1:30 PM car #16 jumped ahead of #9 and #12 to lead the pack for four solid laps.

Still led by #16, five cars quickly broke apart into an elite group racing ahead of the other vehicles, resulting in a significant four-second gap between the last of the five and car #17. This gap continued to widen as the race moved into the second half.

Despite impressive cornering from #12, car #16 managed to stay in the lead. The dropout of car #9 around 1:40 PM for a pit stop left only #12 and #16 to battle for first place. Car #9 lost no time in getting right back on car #16’s tail. Car #16’s impressive leading streak came to an unpleasant end with a heartbreaking spinout into the sand. Seizing this opportunity, cars #9 and #12 quickly overtook #16 before the Indonesian driver could get out of the sand and back on to the track.

Car #9 went on to take first place as today’s early afternoon race drew to a close. Second place went to car #12, a solid overall result considering #12 started out in second position. Third place in the overall series went to car #69. Car #12 moved up from third place in yesterday’s first race to second place today. The good placement of car #69 shows that team #12 is not the only dedicated group of drivers studying the unique tracks across Asia. In the season opening race in Sepang, Malaysia, car #69 also placed in the top three overall.

For the AM category #6 took first place. Despite troubles later in the race, the efforts of car #16 paid off, with a solid second place for the AM category. Finishing up in third place for AM was car #2. As a testament to the challenging nature of this race, six cars did not finish.

The focus of this racing weekend was without a doubt the Indonesian drivers, both those piloting the local Lamborghinis at the record-breaking car parade and those piloting the Lamborghini Gallardo racecars in this first ever Lamborghini Blancpain Super Trofeo in Indonesia. Expect to see many more Indonesian drivers on the podium over the next five races in the 2014 season. Having concluded widely successful festivities and races at the Sentul International Circuit, the Lamborghini Blancpain Super Trofeo now turns north for the third race of the season at the legendary F1 track in Japan: Fuji International Circuit.