Many Rally fans and even rally drivers have a difficult time understanding how the Rally America Championship works. It took me a year to realize Rally America doesn’t actually own the rallies or even have control over simple things like the entry fee charged to the drivers. They are simply the sanctioning body and things like the entry fees are determined by the local organizers that own the individual rallies and do most of the work. So the 100 Acre Woods rally is owned by one person or group, and LSPR is owned by another. The point is that they are not owned by Rally America. If Rally America went away, they could simply use another sanctioning body and 100 Acre Woods or LSPR would continue to operate as they have in previous years. You just wouldn’t see this logo at the rallies anymore.

So what does a sanctioning body do if they don’t own the rallies?
It took me long time to understand this simple question until Nasa Rally Sport published a series of articles explaining how they work with the local event organizers. And it’s the only information I can find on the web so I used it to explain how sanctioning bodies work. I’m sure Rally America has some slight differences in how they operate but this at least gives you a feel for what they do as a company. The list of items below (also borrowed from Nasa) is what a rally needs to perform and it can be hundreds of items long. Where the list for a sanctioning body is more like fifty items per rally. But the sanctioning body is also responsible for the long term infrastructure development that is constant and never ending. 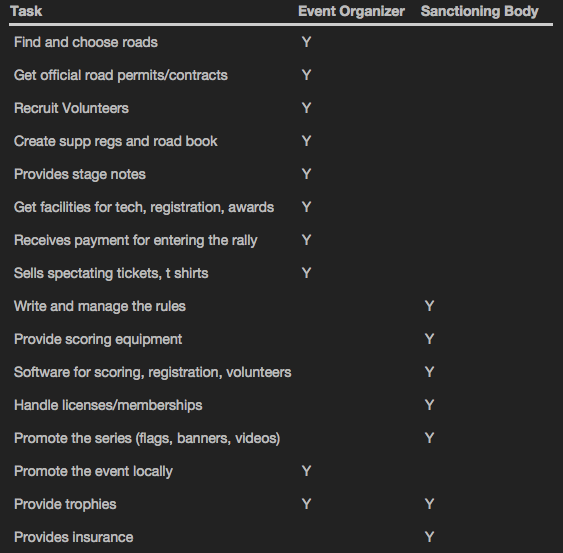 As you can see, the local organizers are the ones that do most of the work. They work with the local towns to close the roads. They plan the route and they organize the volunteers that staff most of the rally. The only thing the owners of the rally don’t do, is licensing, tech inspection, timing & scoring, and media and promotion. For a better understanding of how the local organizers are structured, take a look at this article on Nasa Rally Sport.

So who really determines how the rallies look and feel and operate? It varies from event to event, but maybe this restaurant analogy(also borrowed from Nasa Rallysport) helps explain it. The sanctioning body is like the chef of a very fancy restaurant. The chef creates the recipes for the meals, but when it comes time to make them, it isn’t the chef that cuts up the carrots or sets the timer for the oven. The chef decides the flavor of the meals, and the direction that the menu will evolve. The decisions that the chef makes filter down through all the other people at the restaurant until they define the dining experience that the customer has. Will it be pretentious French haute cuisine? Or will it be your favorite Irish pub?

The sanctioning body should be looking at all the effort that goes into putting on events, and evaluating which pieces are being duplicated over and over, and bring those in-house and standardize them to reduce the effort for everyone. So there are simultaneously two views, one where the sanctioning body is The Man, clamping down on all the crazy stuff you want to do and ruining your fun, and another where the sanctioning body is Your Favorite Boss, giving you a company truck and a company cell phone to get all your work done which makes your life much easier.

So while the sanctioning body does hold authority about certain aspects of how the event must operate, at the end of the day the racers and the event organizers are the customers of the sanctioning body. The event organizers decide who they want to sanction with, who they want to write a check to for licensing, insuring, scoring, and promoting their event. 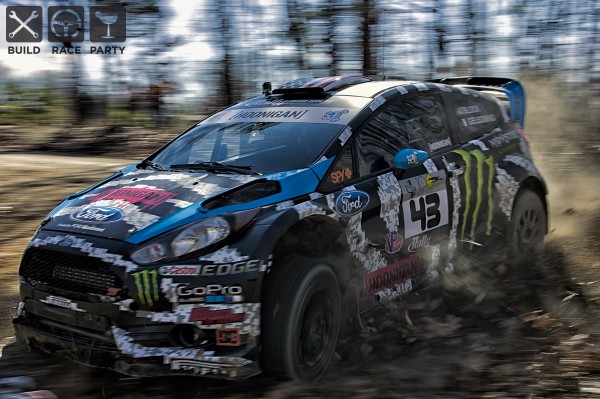 How does this affect us as racers?
I would argue that insurance and promotion are the two most obvious differences between sanctioning bodies from a racer’s perspective. Or at least its the part that effects us the most as drivers. For example, Rally America provides $50,000 of medical insurance to drivers and crew. Sure if you’re racing cars you should have medical insurance but what about the random kid that shows up to crew on your team? Do you check everyone thats with you to make sure they’re covered in case their is an accident? Nasa Rally Sport on the other hand provides $1,000,000 of medical insurance. That is real. If someone gets seriously hurt they will be covered. It will be interesting to see who the new United States Rally Association chooses for their insurance company and the levels of coverage provided. They are brand new and have yet to sanction a rally but people are saying positive things about the people involved.

Promotion is really the part that we notice as racers. It brings fans and media to the events and allows us to deliver a return on an investment by potential sponsors. Rally America used to be the premier series without question. Guys like Travis Pastrana and Ken Block would show up to race for Team Subaru and put on a good show. Antoine L’Estage used to come down from Canada and Ford has been being playing a meaningful role with the Fiesta R2 rally car. But this year we won’t see those guys. Ken Block withdrew from the 100 Acre Woods rally, Antoine is only racing in Canada, and Andrew Comrie Picard won’t be defending his two wheel drive championship in the Fiesta ST. Its pretty much just David Higgins and FY racing at the top of the field. Where did all the big names go?

I would argue they no longer race with Rally America because the series doesn’t provide a meaningful return on the racer’s investment. Entry fees are up and media coverage is way down. As in almost non existent media coverage. Massive sites like Dirty Impreza were denied media credentials for 100 Acre woods as were other blogs that follow rally. Build Race Party sent two photographers to 100 Acre Woods and their media credentials were revoked by the series owner Bill Fogg once they got there. And if you want to put your own photographer or video guy on stage? We understand the fee is north of $3,000 on top of your roughly $2,000 national entry fee. No wonder racers are going elsewhere to have fun. How long can this continue for? What happens if more racers leave? Or really….

What happens if Rally America goes away?
The events would likely move to a new sanctioning body like Nasa Rally Sport or USRA. Alternatively they could form a new series and obtain their own insurance. But either way its very likely that events such as Sno*drift, 100 Acre woods, and LSPR would continue to operate much as they do now. You might see your entry fee come down if they move to Nasa as its insurance costs are lower due to all the motorsport events they sanction in a year. But either way, rally will continue in America. Simply because it’s the local organizers that make rally happen, not the logo on the backdrop when the teams spray champagne on the podium.