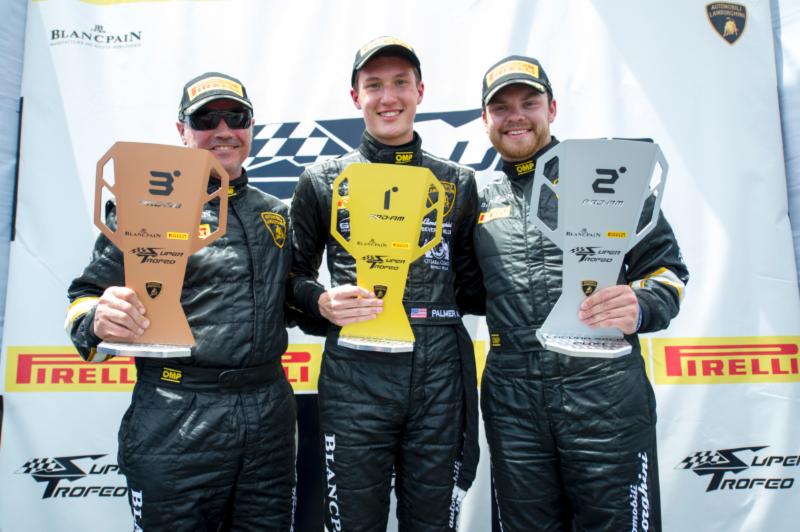 Palmer, from Chicago, became the first two-time winner in the series this season in the No. 14 Lamborghini Beverly Hills Gallardo LP 570-4 Super Trofeo. He led all but four laps of the 50-minute race on the 11-turn, 2.238-mile circuit, losing the top spot only as the field cycled through its mandatory pit stop.

“After the second practice session, we were the quickest car in every session and led every session, so I couldn’t be any happier,” Palmer said. “It was a great experience running here. As a kid I used to dream about it, playing it on the PlayStation, so to finally get to drive here and get two wins is surreal.”

Tim Bell was second in the No. 81 Lamborghini Chicago entry, 3.241 seconds behind Palmer. John Farano rounded out the podium finishers in the No. 63 Lamborghini Dallas Gallardo by holding off 2013 series champion Kevin Conway and 2014 Sebring race winner Al Carter over the closing laps.

Palmer and Conway were running first and second, respectively, when they both made their mandatory pit stop on Lap 13. Conway exited the pits ahead of Palmer in his No. 29 Lamborghini Carolinas Gallardo, but Palmer passed him on the next lap. Conway eventually lost second place when he was assessed a drive-through penalty because his stop was shorter than the mandated 90-second minimum.

Rounds 5 and 6 of the season will take place June 27-29 at historic Watkins Glen International in the scenic Finger Lakes region of upstate New York. 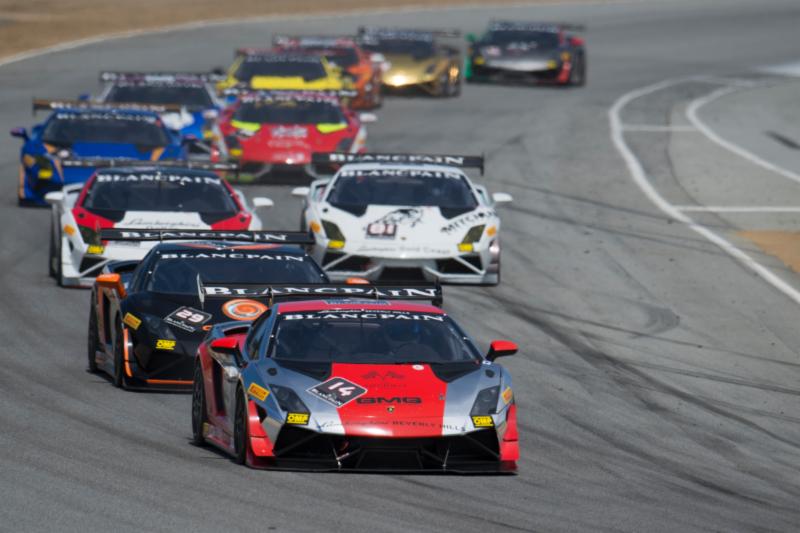 ANDREW PALMER (Winner, No. 14 Lamborghini Beverly Hills): “Everybody at GMG Racing gave me a great car. After the second practice session, we were the quickest car in every session and led every session, so I couldn’t be any happier. Coming back from Sebring was a great way to finish the day here today. It was a great experience running here. As a kid I used to dream about it, playing it on the PlayStation, so to finally get to drive here and get two wins is surreal.”

TIM BELL (Second, No. 81 Lamborghini Chicago): “Mitchum (Motorsports) followed the direction I wanted the car to go and made some perfect changes for this race today. It was a little loose yesterday. I had a little trouble with a quick spin in Turn 10 yesterday. But today the conditions were perfect, and the car was great. The competitors played nicely. These cars are awesome to drive. One of the best cars I’ve ever driven. It was a great day overall.”

JOHN FARANO (Third, No. 63 Lamborghini Dallas): “We had a really good battle. Al (Carter) and I are familiar with each other, so a lot of fun there at the end. It’s great to be here. This is a great circuit. I love Laguna. It’s a great series. Second event for me; I’m really loving it. It looks like I’ll be at every event now.”

KEVIN O’CONNELL (First Amateur, No. 9 Lamborghini Houston): “The goal today was just to try to run hard in the beginning, stay out of trouble and then to just run some consistent laps. We’re still trying to understand these cars, coming from NASCAR. Slowly but surely, I think we’re getting better and better. The next few races, we want to start running up with the pros and their lap times. So we’re going to start testing and start working toward that.”

SCOTT MONROE (Second Amateur, No. 8 Lamborghini Toronto): “In the beginning, there were some cars out there really aggressive, fighting for better positions. But midway through the race, it started to fade out. Drivers started to give way. All in all, it was a great day. I’m very happy. The car is performing well. The weather couldn’t be better, and the fans were awesome. Thanks to Lamborghini North America for the opportunity.”

RYAN OCKEY (Third Amateur, No. 88 Lamborghini Vancouver): “Everything was going great until I spun. I was able to battle back and get by some of the slower guys. I was picking up about two seconds per lap on number two (second in class). If I had a couple more laps, I think I could have gotten around him. But you’ve got to keep out of the dirt.”
Lamborghini Blancpain Super Trofeo North America – 2014 Calendar: