I have wanted to rally for a very long time. When I was younger, I used to watch the WRC coverage on TV every chance I could. I even went so far as considering building a car in 2004 When I knew crap about cars. Instead I slowly rose to the occasion. It took a friend, Pete, to catalyze my rally life by bringing me along to rallycrosses in his RX-7 in the OVR region. I was hooked, but I wanted more.

I really didn’t get going until I moved to Idaho. I found myself living close to Dan Norkus, a co-driver who was and has been quite active. Through him I discovered the Idaho Rally and promptly signed up as  volunteer. I was not at a point in my life where I could afford driving, but damn  it, I could do something!

A few weeks before the event, the volunteer coordinator up and quit. Jens needed the spot filled quick and being one of the few locals in Idaho I went for it. I have been wanting to get involved with rally for so long that i jumped into the figurative pool head first. So not only was this my first rally as a volunteer, I also entered into the organizational level. Thankfully, I had all that experience….

I’ll use quotes to make it feel more like a narrative but the exact words escape me.

So, 240 people is a lot of people. Better still, the event was right around the corner. The timing couldn’t have been worse. We were passed the point were people generally plan ahead for things and we needed people who could put forth major commitments on short notice. Did I mention one of the days was a Friday? You know what people do on Fridays? They work.

The first day was late recce followed by a super special at the fairgrounds. Mostly, I walked around the site with a phone stuck to my ear. Being the primary contact for a fair number of people, trying to confirm volunteers, plus find new ones demands serious airtime. The super special was an honest attempt at a good spectator event. There was a large dirt overpass jump thing even. It was rather short however, and being a ticket event, the crowd was a little disappointed. Most of the people realized they could see everything from outside the fence line anyway. It also poorly reflected on what rally really is, which is basically what every super special does.

Jens: “I said we would have an overnight guard so people can leave theirs cars and trailers….but….I don’t have one.”

Continuing my pool metaphor, I jumped in head first alright. Into the shallow end. Where the stairs are.

I had spent the night walking around. Then more walking. Followed by some sitting. I think I napped for a bit on a desk in the fairgrounds security office. The floor would have been more comfortable but it was cold. It was quite a crap night. Thankfully the sunrise put an end to all that hope for sleep. Aaron, a rally fanatic from Utah, was to be my partner in crime. He had a lovely Honda Fit with snow tires, that I’m sure never drove the same way again… I am actually not surprised the Fit is a Spec B rally offering now. It actually did quite well. After grabbing some en route-coffee from the worst coffee place on earth, we head off to Mountain Home. For reference, here is the route for the day. 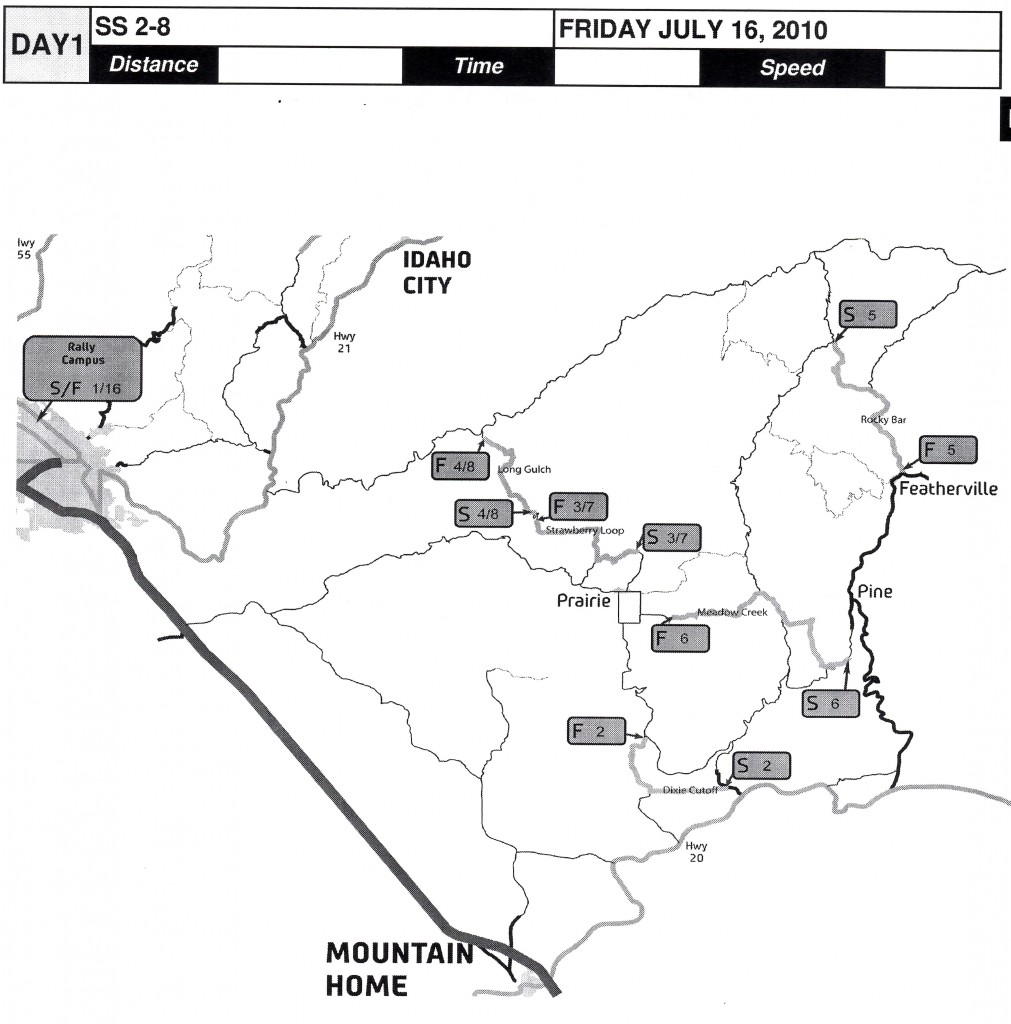 Mountain Home is south-east of Boise by about 35 minutes. The town was originally the hub of the Idaho Rally, which began as a tarmac event in 2007. By 2010, the rally had grown into a two county event. Day 1 was in Elmore county, north of Mountain Home. We got off the Hwy 20 exit and immediately went north. Not too long after we pulled off for SS2 (Dixie Cutoff). Keep in mind, our goal was to ensure that the road was staffed with road guards and maintain a distance ahead of the competitors to keep the event on time. Since the last volunteer coordinator quit, and various other reasons, we had no data for where we needed people to be on stage. Better still we had no idea who would actually show up. The first rule you’ll learn about volunteers is that they are really good about backing out without notification. So in reality, you need about 2 people registered to get 1 person to show.

Pulling up to the ATC for SS2 there was a line of volunteers. A really small line. The captain, who I had spoke with only once before, said he had sent some down stage already. We collected the cars and conga lined downed the stage. I would point out the window at spots we needed people to be at. This stage was already somewhat staffed, and we managed to stretch out the volunteers to all the spots that needed them. Great! But we don’t have a radio to let anyone know anything. Boo. We also wanted to make sure the whole stage was staffed effectively. As in, no blatant intersections left open, so we high-tailed it to the end of the stage, then would flip around to the beginning again. Then, turn around once more, and drive through the stage then on to the transit. Partly because it was the only way to make sure people were where they needed to be. Partly because it was really damn fun.

The next stages were less favorable with volunteers but it worked. We flew down the stages as fast as sensibility and the Fit would go. Keeping ahead of the competitors was tough. Hell we essentially did the rally three times. We had some great people working Strawberry Loop and Long Gulch, experienced with rally. The issues were just volunteers showing up. As it turned out the directions to get the stages were dreadful. Most of the roads coming out were unlabeled and the provided directions (I had no hand in) were crap. Cell phones did work for squat. So most of the volunteers who did come were probably lost. They may be still there to this very day.

The longest transit I’ve been on to this day, is from SS4 (Long Gulch) to SS5 (Rocky Bar). While I am sure there have been longer transits in the history of rally, it still took for freaking ever. It was about 50 miles of winding road, all on dirt, often wash-boarded, following one of the rivers to the top of the Rocky Bar. Pretty sure I napped through a big chunk of it. It was scenic and all that. But I was far more tired than I was concerned with my surroundings. The last bit was a steep climb up some rather rough road to the top of the pass before reaching ATC for Rocky Bar.

Rocky Bar is  ghost town, where the last year round occupant died in the 1960’s. In its hay day, there were about 2,500 residents, however much of the town has been destroy by fires over the last hundred years. A little does remain of the town, and the stage goes straight through it. We hauled down through the stage and stopped to talk with the radio control at the old house around the half way mark. Don’t recall why. Either just banter, radio issues, volunteers, or something. Probably radio issues. HAM guys don’t have it easy at Idaho. At any rate, we speed off. We reached the end of the stage, which opened into Featherville. A small not-ghost town with food. We even thought we had time to eat some of this food! But that whole “time” thing came into play. The first car was catching up to us. So our hungry selves speed off once again to Meadow Creek. 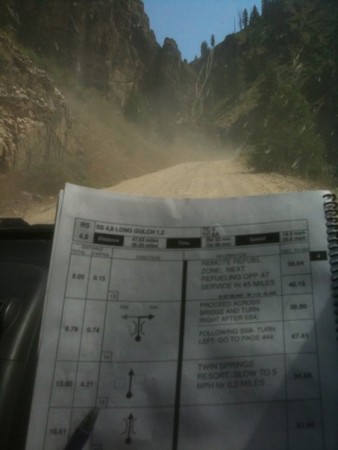 Meadow creek was an ambitious stage. It started along the reservoir with hilariously large exposures on the side, then cut through not one, but TWO campgrounds, all over something like 23 miles. This stage needed the most volunteers by far. So much so that we attempted to redistribute volunteers from the other stages that ended to this one. We still didn’t have enough. When we passed through the campgrounds, our stomachs sank. There were TONS of people. Tons. And not rally people. Just good ole fashioned, didn’t read the road closure sign campers who have no idea what rally is. I tried to explain the situation, and have them serve as augmented road guards. But it was a busy location and there was not effective radio coverage of the area. We even stopped off at an intersection to act as road guards near the stages end. But due to safety the stage was cancelled. Functionally, we were only of the few cars to really get to enjoy the stage.  With SS7 and  8 being reruns, and not in need of us, we headed back to Boise.

The great part of rally is the social aspects. At the time I knew only a few people, but everyone is pretty damn friendly. I ate a late dinner at a 24 diner with some folks whose names I’ve since forgotten servicing for someone. Most of my night shift was spent walk around looking at cars and chatting with those who stayed late. The rest was boring as shit.

Thankfully, I managed to get into a competitors giant RV for about two or three hours of sleep. The morning came too fast. At 6am Aaron was knocking on the RV door. For me, it felt like I had only just closed my eyes. Grudgingly, I got up. Behold! The route for day 2. 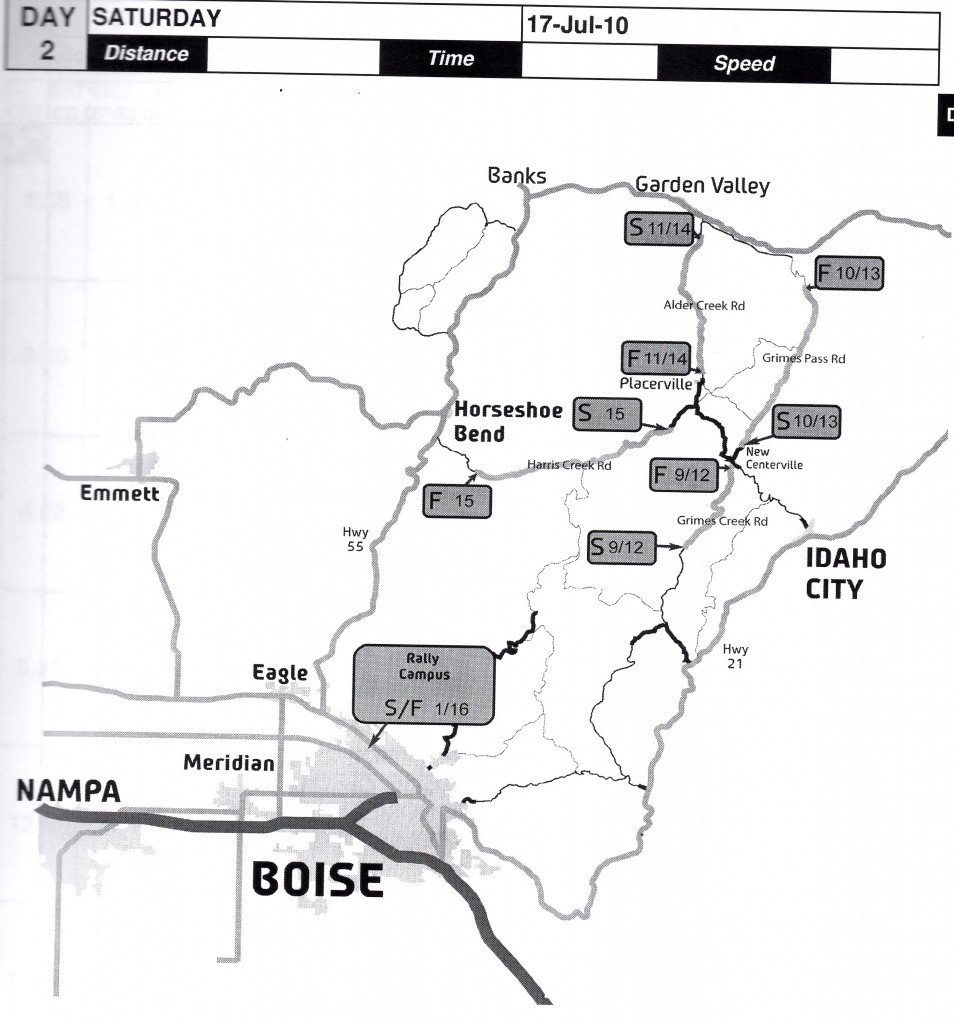 Today was just north of Boise, in Boise county, and many of the stages are currently used in the rally. The route was far more compact than the day before, with service centered in Placerville, another ghost town that its few residents maintain quite well. The corner store is even open on Christmas!

Aaron and I were in a groove. We hauled up and down the stages, sticking volunteers places and chatting with the folks we encountered. Some were campers and more than willing to stay out and watch the rally. Really its that or that a Subaru to the face. I loved the roads in Elmore, but these stages flowed so well. Coming in from hwy 21, the route cloverleafed around Placerville keeping the transits short and simple. Although, the first time I came down Grime’s pass, we were a wee bit concerned. The transit started with a triple caution (!!!) on a transit! The road was a tight windy deathtrap waiting to happen.

We even managed to pull off and watch for awhile. This allowed some time for priceless moments like flippkng off Dan as he drove by in the MR2 suffering in limp mode. Slow enough for him to appreciate my universal gesture.

The route ended through Harris Creek. One of the best stages in the PNW. We made our way back down to Boise. I was tired. The rally was successful. I had meet all kinds of people. Most importantly, I had attended my first stage rally. I demolished several plates of potato salad from the banquet and said my goodbyes. I didn’t stay for awards, instead I deliriously drove my hour long ride home and slept for 20 hours. 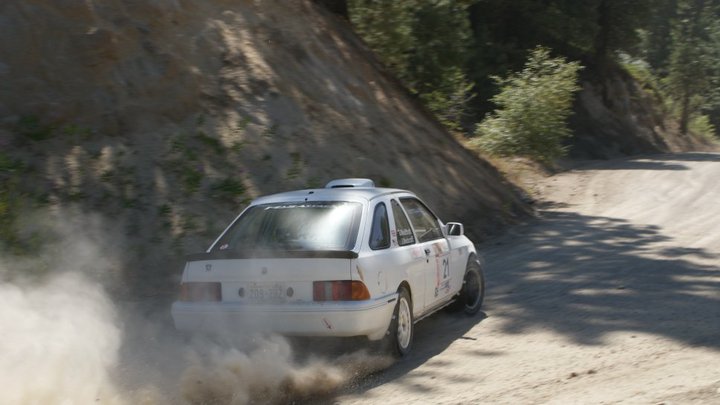