Double winner from Hockenheim Jordan Lee Pepper (17) became the third driver since the Volkswagen Scirocco R-Cup was launched in 2010 to win the first two races of the season. Poles Maciej Steinhof (28) and Mateusz Lisowski (23) had also achieved this feat before him. However, they both then had to settle for second place in the third race of the year. Incidentally, Steinhof ended the 2010 season in third place overall, while Lisowski went on to win the title in 2011. 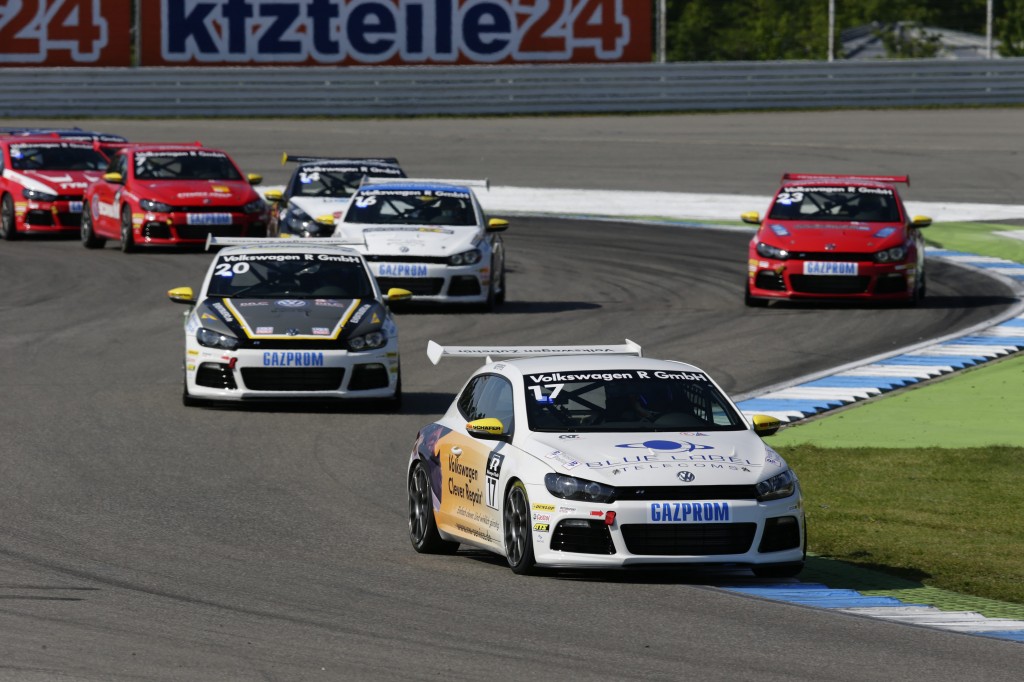 As well as the fact that no driver has ever won the first three races in a row in the environmentally-sound one-make cup, another statistic also suggests it will be difficult for South African Pepper to continue his winning run: to date, no driver has ever won two races in a Cup Scirocco in Oschersleben. When the circuit hosted the series most recently in September 2013, it was Dane Kasper H. Jensen (22) and Dennis Trebingfrom the USA (21) whose names went down in the role of honour. 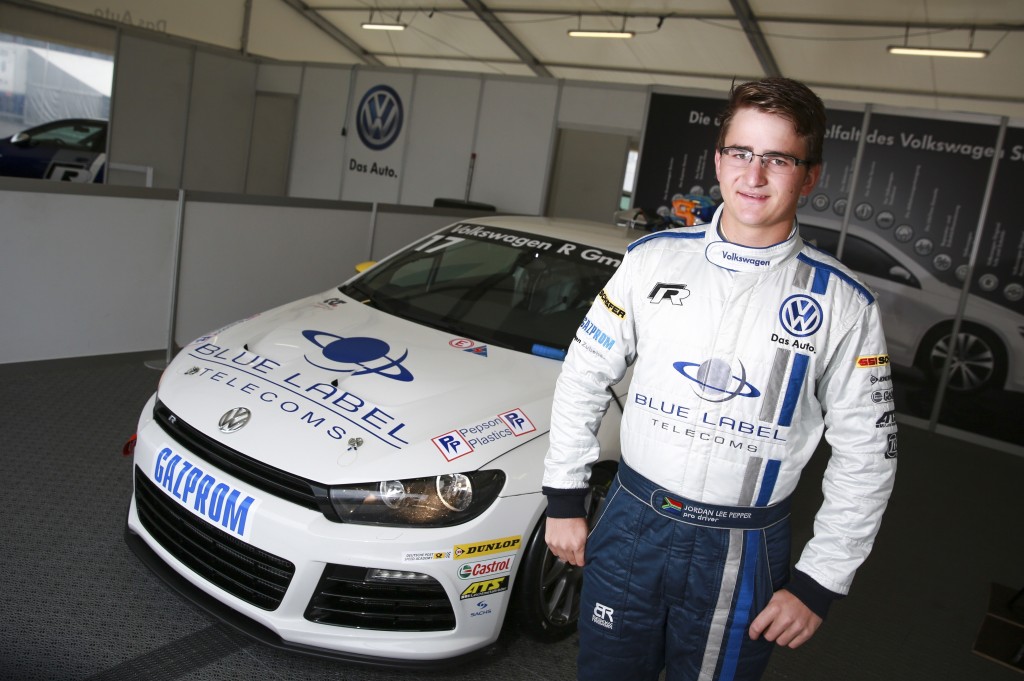 Jordan Lee Pepper was joined on the podium in Hockenheim by German Manuel Fahnauer (19) and Sweden’s Victor Bouveng (18) after both of the opening races of the season. As such, the podium was monopolised by drivers who gained experience in last year’s Volkswagen Scirocco R-Cup. Compared to Hockenheim, however, the rookies will be at a far smaller disadvantage in Oschersleben. All 23 starters took part in two days of testing here before the start of the season. As well as Pepper, Cup newcomers like German Andre Gies (20) and Moritz Oberheim (17) also impressed with quick times. 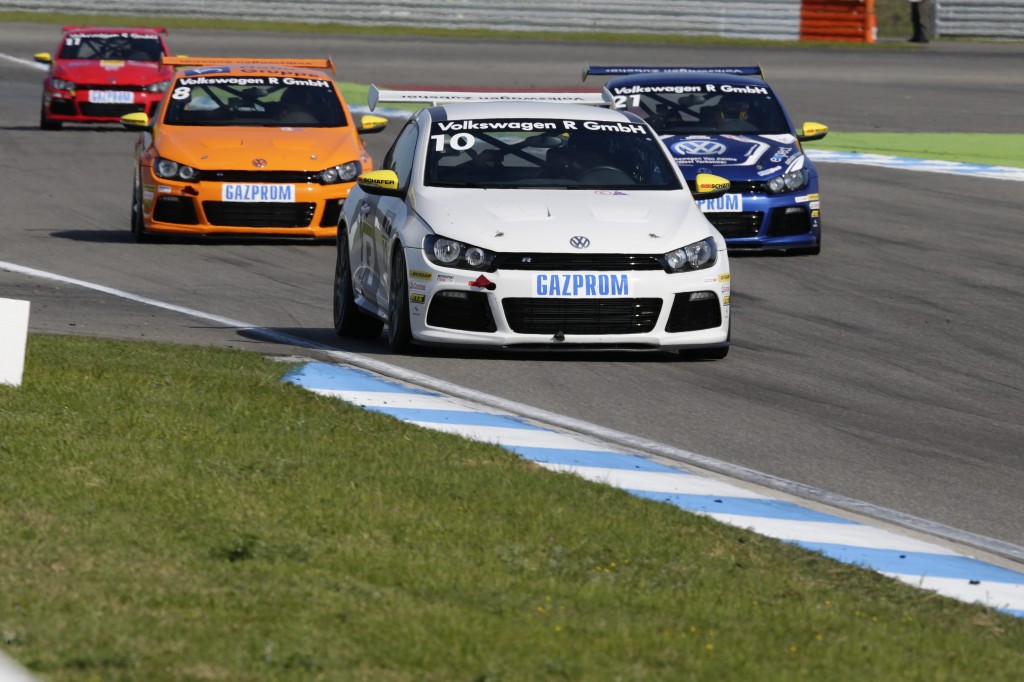 The points system is not the only aspect of the regulations that has been modified since last season. The Legends competition no longer exists in its previous form. Instead, guest starters like royal Pierre Casiraghi (26) will put pedal to the metal. The guest appearance in the Scirocco R-Cup in Hockenheim was also the race debut for the member of Monaco’s royal family. Another new feature of the regulations: the starting order for the second race of a race weekend will no longer be the reverse order of the result of the opening race, but will be determined by each driver’s second-best time from qualifying. 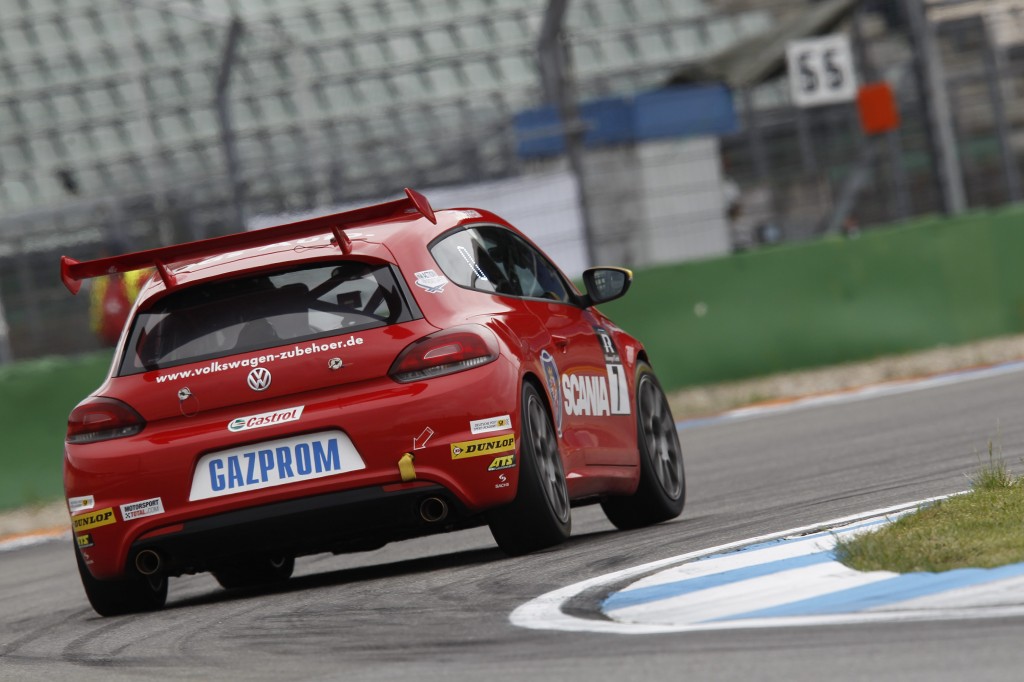 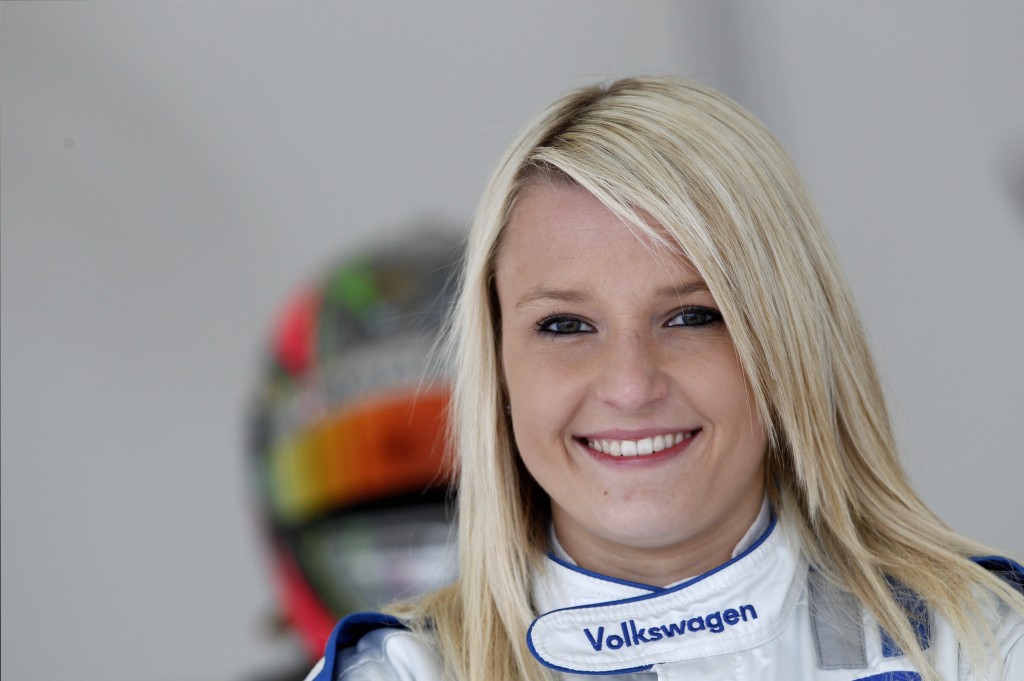 Girl power is also a prominent feature of this year’s Scirocco R-Cup. In Mikaela Ahlin-Kottulinsky, who finished fifth in the opening race of the season in Hockenheim, Switzerland’s Jasmin Preisig (21), Lucile Cypriano from France (17) and German Doreen Seidel (28), four flying ladies will take on their male counterparts. Lucile Cypriano earned her ticket via a talent competition run by the FIA Women in Motorsport Commission and showed what she was capable of with a top-ten finish on the opening weekend. The attractive Doreen Seidel’s talent has not been restricted to motorsport in recent years: she was also Playmate of the Year in 2008. 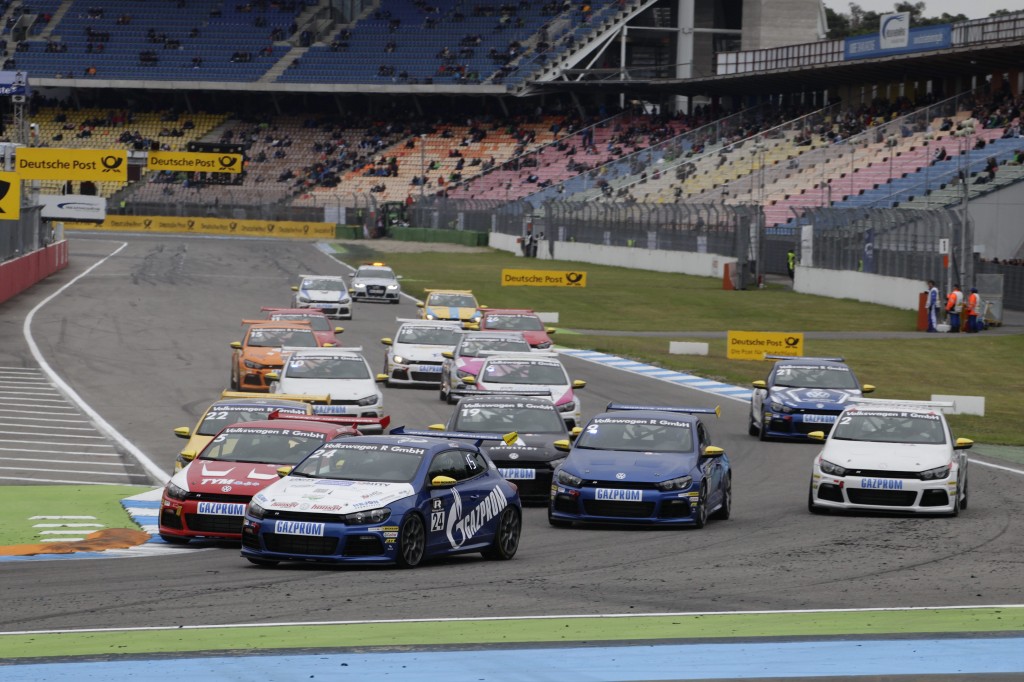 The Scirocco R-Cup races are not the only sporting highlights this weekend. On Saturday evening, Borussia Dortmund will face FC Bayern Munich at the Olympic Stadium in Berlin in the final of the DFB Cup. Volkswagen is partner of the DFB Cup.

The Motorsport Arena Oschersleben was completed in July 1997 after a 13-month building period. A hotel with an exclusive view of the track is located directly next to the Motorsport Arena. The facility also includes a karting circuit and an off-road area.

The cars in the Scirocco R-Cup reach their top speed in Oschersleben on the start/finish straight, which is about 680 metres long. Here, the drivers accelerate in fifth gear to speeds of up to 188 km/h. A lap of the circuit in Oschersleben is 3.696 kilometres and features 14 corners: seven right-handers and seven left-handers.

Quotes ahead of the second race weekend in Oschersleben

Jost Capito, Volkswagen Motorsport Director: “The opening weekend of the Volkswagen Scirocco R-Cup showed that it is going to be a varied and entertaining season. And I am certain it is going to continue to be exciting: at Volkswagen’s home event in Oschersleben, the other drivers will be striving to bring Jordan Lee Pepper’s winning start to an end. It promises to provide us with some more top-notch motor racing.”

Jordan Lee Pepper, leader in the Scirocco R-Cup: “I want to win the title this year, and two wins from two races is obviously the perfect start to this project. The race in Oschersleben will be even tougher. Everyone tested here ahead of the season, so we all know the circuit. With this in mind, I would be happy with two podiums. However, I will obviously be trying to win both races. I have the confidence and the pace – after all, I was the fastest driver at the test in Oschersleben. However, I obviously can’t be certain that everything will run quite as smoothly as it did in Hockenheim.”

Dominik Peitz, starter in the Scirocco R-Cup: “I am really enjoying the Volkswagen Scirocco R-Cup – it is superbly organised and the races are really tough. I was hoping for a top-ten finish on the opening race weekend, and I more than achieved that goal with sixth and seventh place. I am happy to be the best rookie in the overall standings in the Volkswagen Scirocco R-Cup. I want to try to improve my grid position a bit in Oschersleben. The goal for the race is then a place in the top five. Above all, I must learn how to be more clever about the way I use the Push-to-pass system.”

Chris Smiley, starter in the Scirocco R-Cup: “Hockenheim was a totally new experience for me – both the track and my first race in the Cup-Scirocco. I made progress over the course of the weekend, but still have a lot to learn. We rookies will be helped in Oschersleben by the fact that we have already tested here. The standard among the drivers is very high, so it will not be any easier. I have my sights set on a place in the top ten.”

Andre Gies, starter in the Scirocco R-Cup: “Oschersleben is something of a home race for me. Along with the Nürburgring, this is the circuit I have the most experience of. As such, I am aiming to take another step forward after my first two races in the Scirocco R-Cup in Hockenheim. A top-ten finish would be ideal, but something around 12th or 13th would also be okay for me. I want to improve consistently throughout the season. After all, I must first bridge the gap when it comes to the amount of extra experience most of the other drivers have.”

Jasmin Preisig, starter in the Scirocco R-Cup: “Hockenheim was an awesome experience. However, I was not particularly happy with my first two races. Although many people have told me since that I put in a good performance, I would have liked to have finished in the top ten. Hopefully I will do better in Oschersleben. It is an advantage that I know from the tests how the car reacts here. As such, you are not starting completely from scratch. A top-ten finish would be nice.”