The Audi R18 e-tron quattro uses less fuel than any of its predecessors. In addition to the powertrain, aerodynamics makes a significant contribution to achieving excellent lap times with low fuel consumption. At round two of the FIA World Endurance Championship (WEC) at Spa (Belgium), the second body version of the new Audi R18 e-tron quattro made its debut. It has less aerodynamic drag for the Le Mans high-speed circuit. 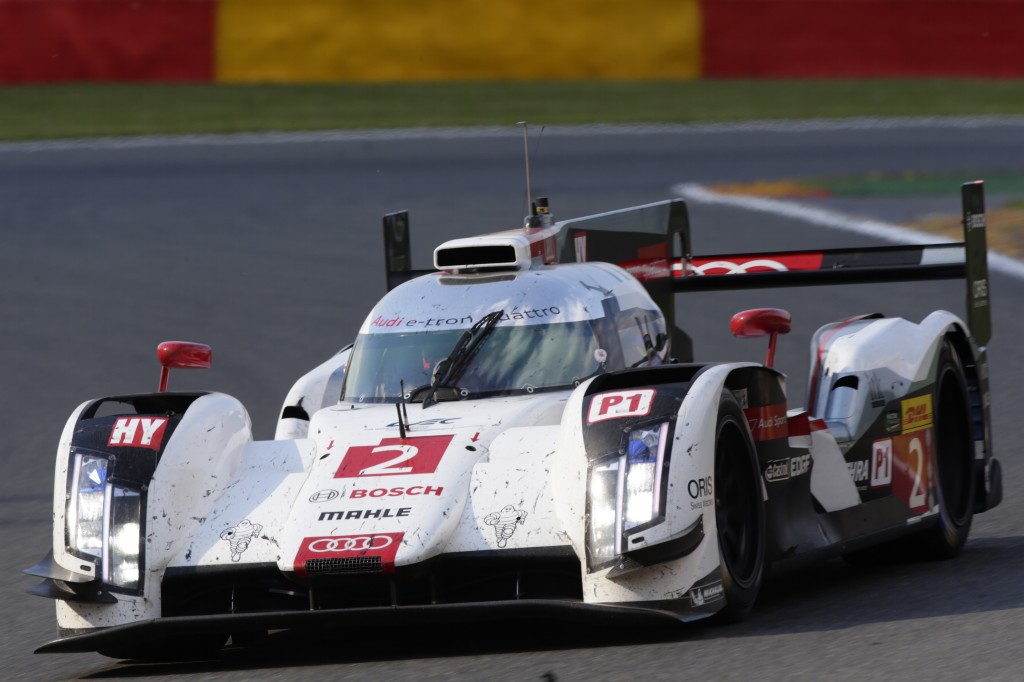 Even the timeline shows the close link between the race car’s aerodynamic development and its basic concept. The aerodynamicists of Audi Sport were involved in the determination of the concept for the current race car from the summer of 2012. “We typically begin with a rough initial layout,” explains Jan Monchaux, Head of Aerodynamics at Audi Sport. “The engine concept, the wheelbase and the schematic drawing of the vehicle provide us with the key data. We subsequently design the first basic aerodynamic shape. In the next step, we analyze its performance potential by means of CFD.” Computational Fluid Dynamics (CFD) calculates phenomena of fluid dynamics using model equations. In the initial development stage, this eliminates the need for considerably more complex wind tunnel tests. “We then continue to elaborate the strengths of the initial design step by step and reduce potential deficits in the process,” adds Jan Monchaux. 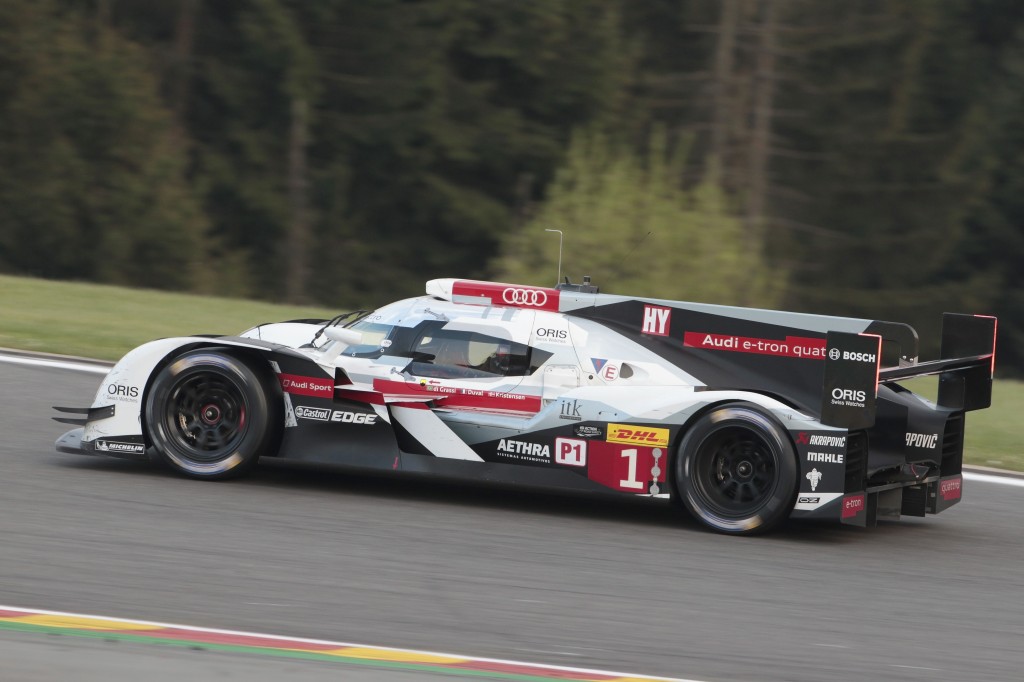 The aim pursued by the developers is always the same. “To achieve the efficiency targets defined by the regulations, it is necessary to find the perfect ratio between aerodynamic drag and downforce,” says Dr. Martin Mühlmeier, Head of Technology at Audi Sport. “Using multiple simulations, we try to clarify even before the first test whether or not the car generates sufficient downforce to achieve the desired cornering speeds. At the same time, it is necessary to prevent excessive aerodynamic drag because we have to be fast on the straights as well. Another challenge resulting from the 2014 regulations is to design the aerodynamics in a way that optimally complies with the specified consumption targets.” 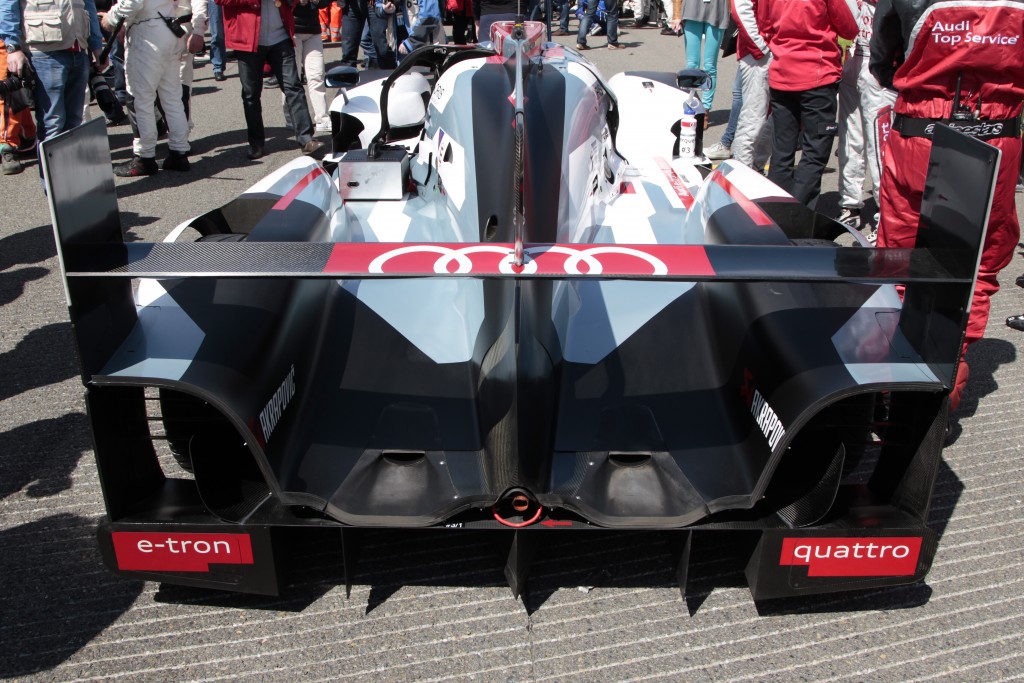 The unusual track characteristics of the Le Mans circuit pose a special challenge. The track in Western France with its long straights and many high-speed turns allows extreme parameters. A year ago, Audi factory driver André Lotterer on his fastest race lap (3m 22.746s) achieved an average speed of 242 km/h. 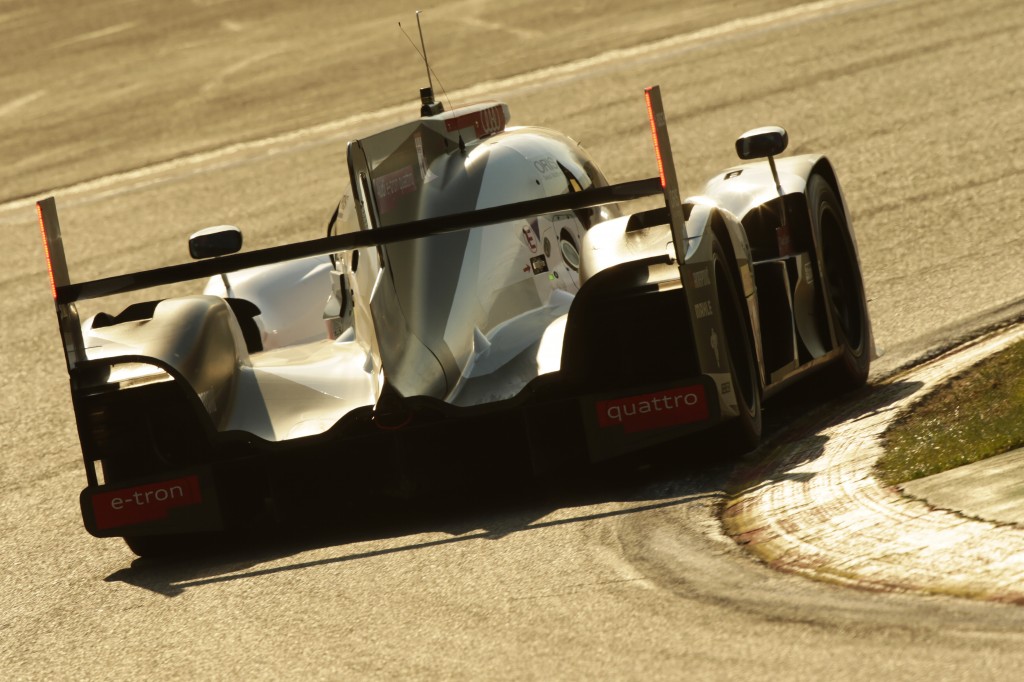 For this reason, Audi has developed two variants: one body version with minimal aerodynamic drag for Le Mans and one for the other seven WEC tracks that require higher downforce. Even at first glance, the two body versions clearly differ from each other, as could be seen during their joint fielding at Spa. “Nearly all the relevant areas of the bodywork have been optimized,” explains Jan Monchaux. At the front, the modified fenders with openings on the inside instead of at the top are noticeable. The differences at the rear are conspicuous. The body is now flush with the rear wing and fully uses the maximum length of 4,650 millimeters. By contrast, the high-downforce version has a shortened body. The tailpipes differ as well. For Le Mans, they do not exit to the right and left of the central fin but at the body surface above the diffusor. 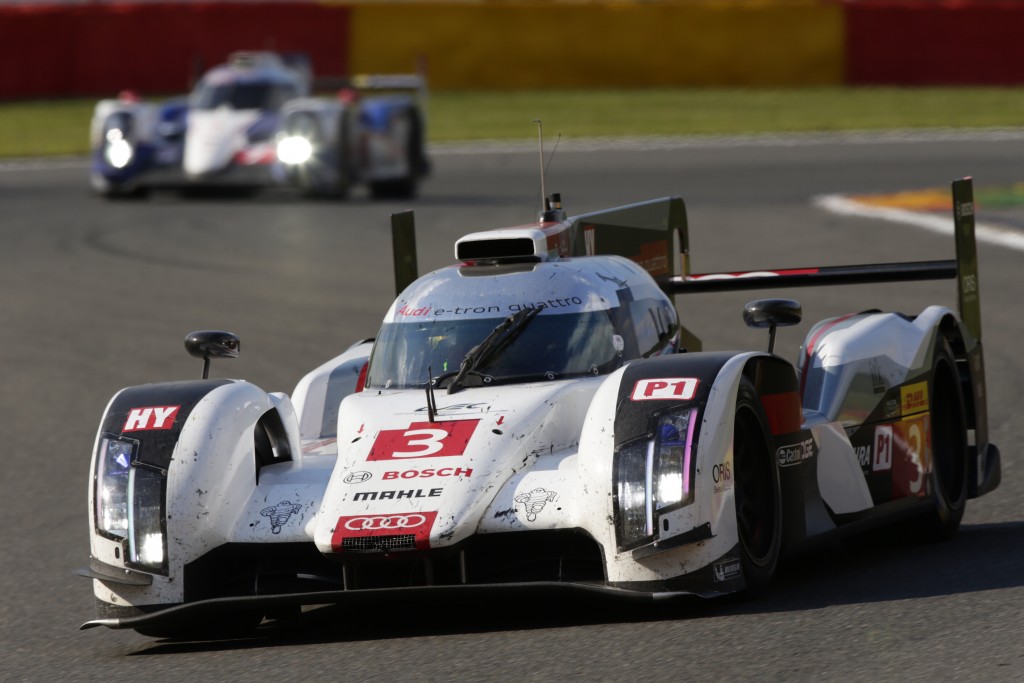 “The challenge of minimizing aerodynamic drag has further increased under the new 2014 efficiency regulations,” says Monchaux. In the simulation, Audi calculates a parameter for aerodynamic drag that must not be exceeded so that compliance with the consumption targets established by the regulations is ensured. At the same time, certain downforce parameters must be achieved in order to make good cornering speeds possible. “We have to achieve pinpoint accuracy in this case while in the past there was more room for maneuver,” says the aerodynamicist. At Spa, on May 3, both body versions were concurrently fielded for the first time. The measurements obtained for car #3, the Audi R18 e-tron quattro designed for Le Mans and driven by Filipe Albuquerque (P) and Marco Bonanomi (I) confirmed the assumptions made by Audi Sport. As a result, Audi is targeting the Le Mans 24 Hours in June with sophisticated aerodynamics.