Now that the entire northeast is blanketed with snow (and I am snowed in), it feels like a pretty good time to revisit the third annual Red Bull Frozen Rush. Two years after Ricky Johnson took a Pro 4 truck to the snow for the first time and a year after the event turned into an eight-truck race at Sunday River, nine of the world’s best hiked back up to Maine for another shot at taming the converted ski slopes. 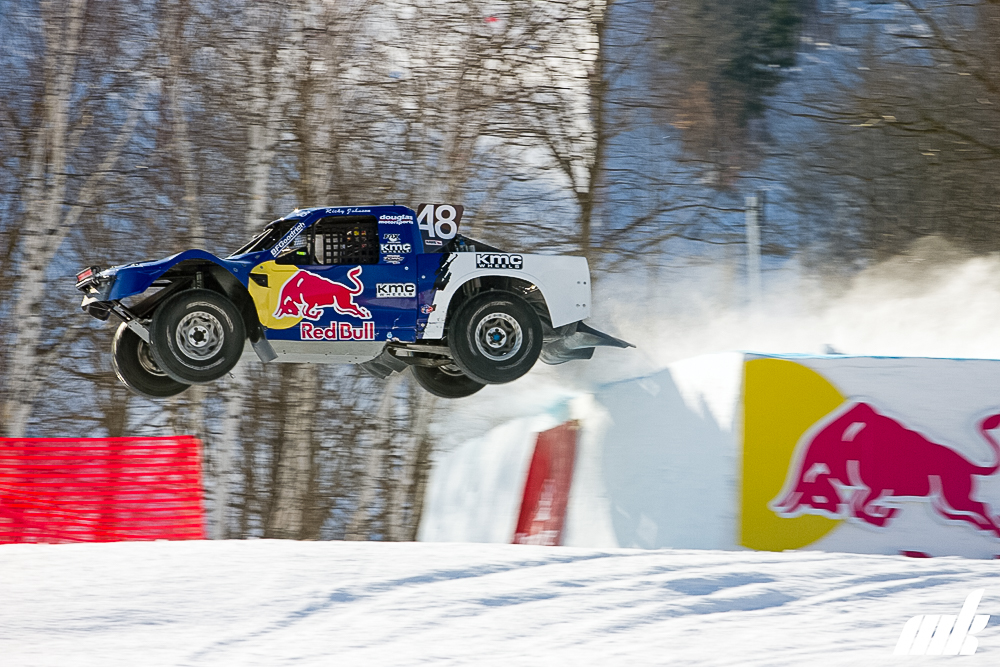 For those of you who don’t know me, my name is Chris Leone and I’m Red Bull Global Rallycross’ resident media guy. Since I’m based in Boston, Frozen Rush is a convenient race for me to get to, and it serves multiple purposes: not only does it give me a chance to keep in practice during the GRC offseason, it’s a great way to get my racing fix! 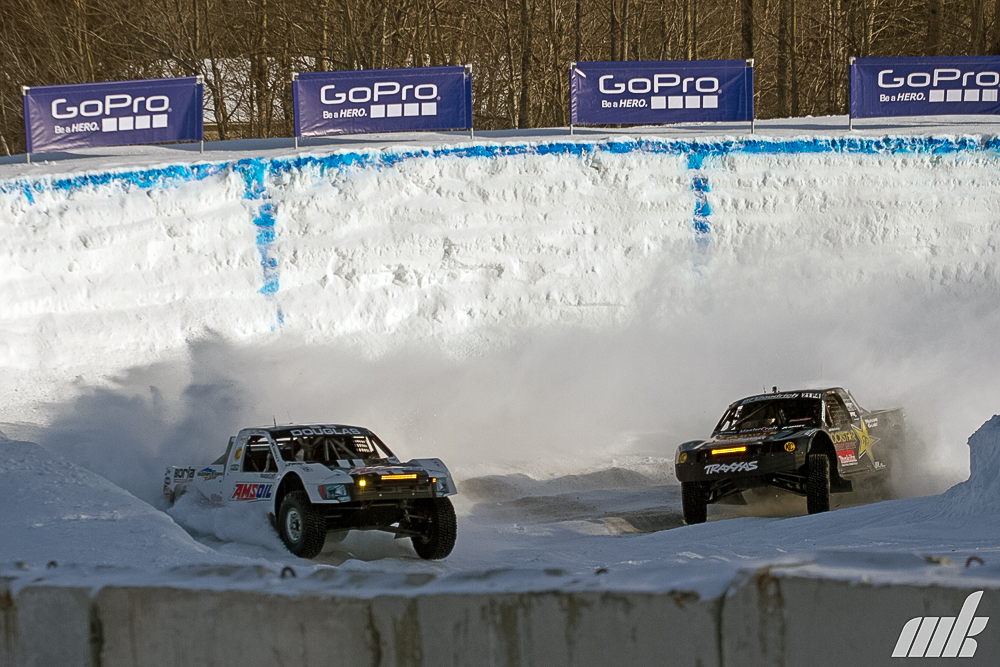 For the past two years, Frozen Rush has been the centerpiece of Sunday River’s College Week—a great way to get the “right” crowd (read: college students) paying attention. But the event has plenty of novelty for hardcore race fans, too, and not just because it’s on snow. The northeast has little to no tradition of off-road truck racing, so it’s a completely different type of racing experience from what we have, which is typically only stock car racing (NASCAR or local) or stage rally. 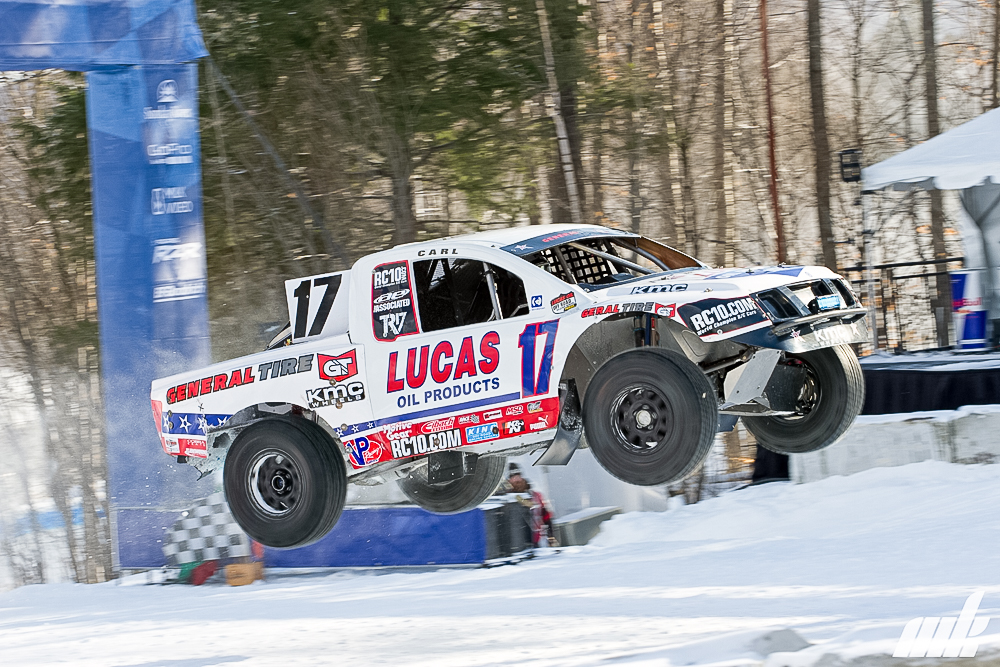 Last year’s goal was to get trucks racing against one another head to head, but the combination of snow roost and lack of windshields killed that. Instead, we got a time attack format—in each matchup, the first driver would launch 25 seconds ahead of the second driver, and the chaser had to cross the line within that time frame after the leader did. It was an intensely dramatic event, but not the show that anyone wanted to put on. 2015 would be head-to-head or bust. 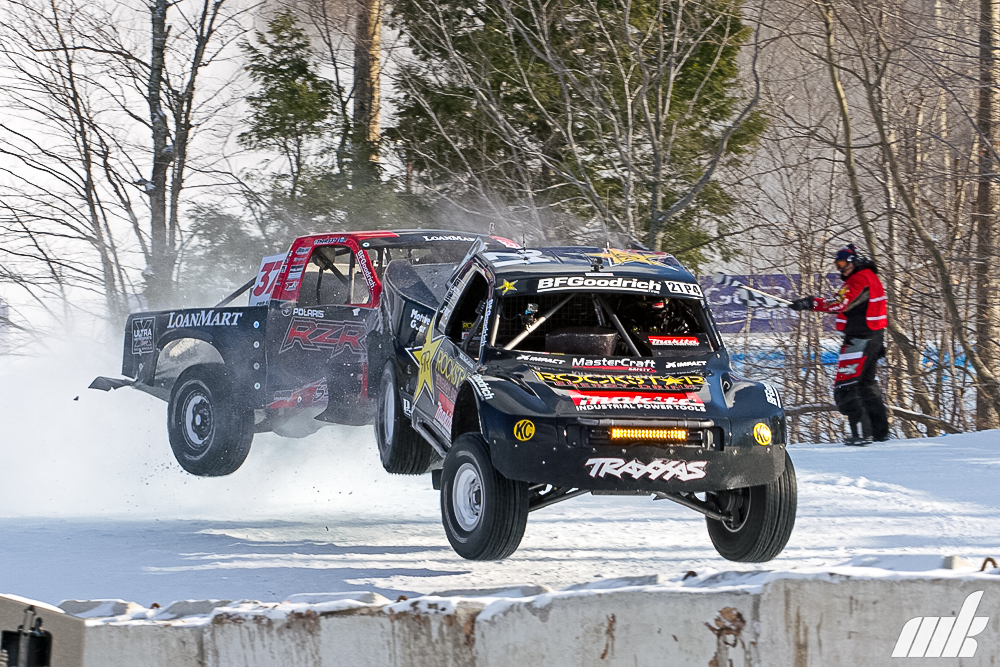 And so, head-to-head it was. 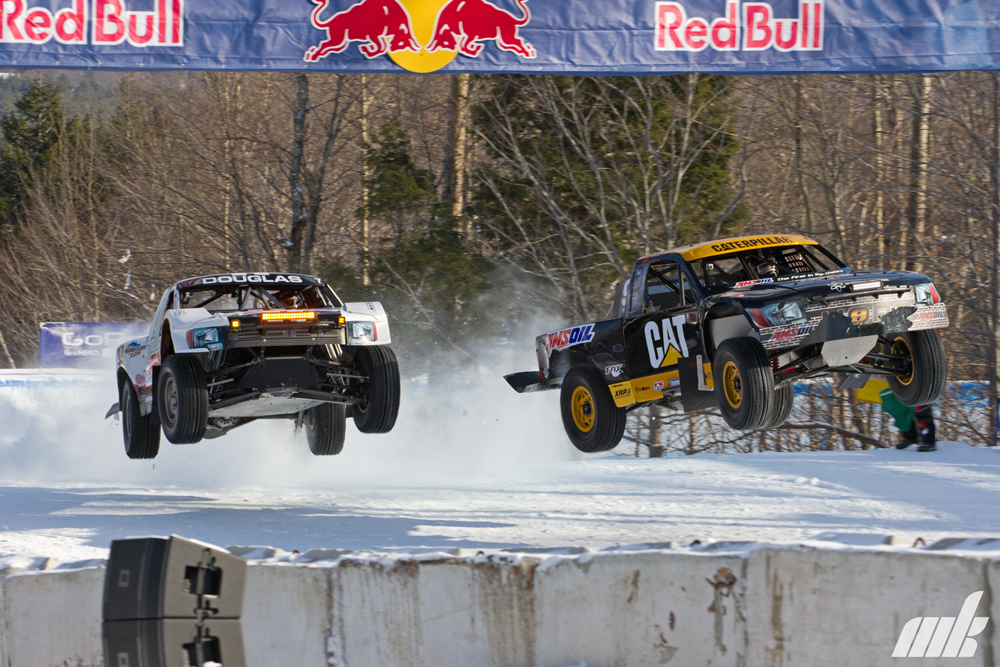 The track was divided into two lanes, with each driver responsible for alternating lanes every lap. (It was made plain in the drivers’ meeting that failure to do so would result in instant disqualification.) The last chance qualifier and first round would see drivers run two laps (one per lane), the semifinals and third place race would be four laps each, and the final showdown would be six. 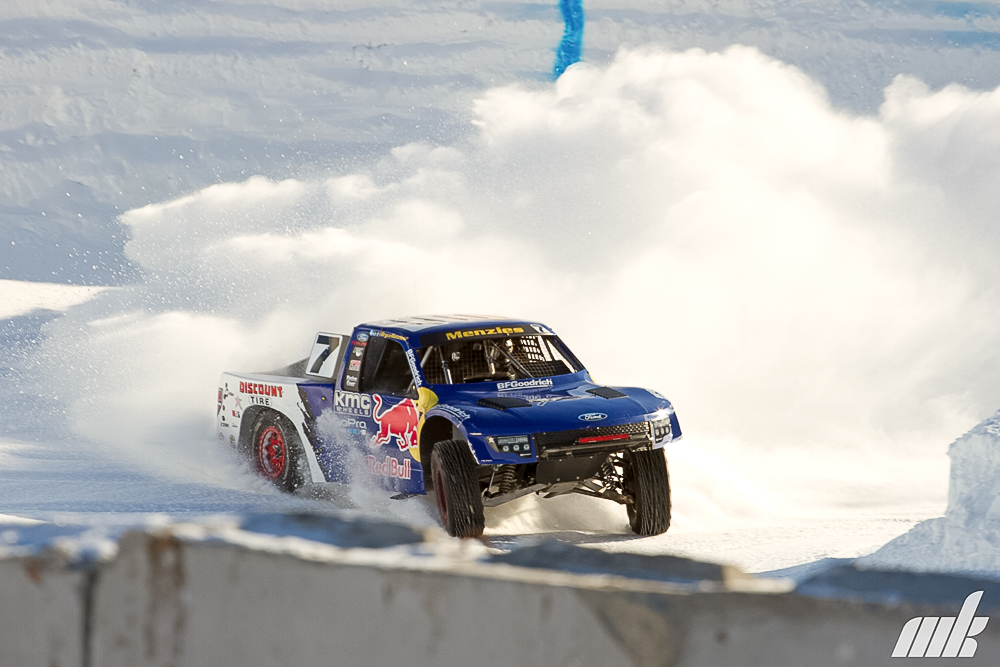 Not surprisingly, each winning driver all day long was a 2014 event participant. Carl Renezeder took the LCQ, while Bryce Menzies, Scott Douglas, Rob MacCachren, and defending event winner Ricky Johnson took the four first-round matchups. Johnson and Menzies then won the semifinals, setting up a battle between the Red Bull teammates in the main event, while MacCachren took third place. 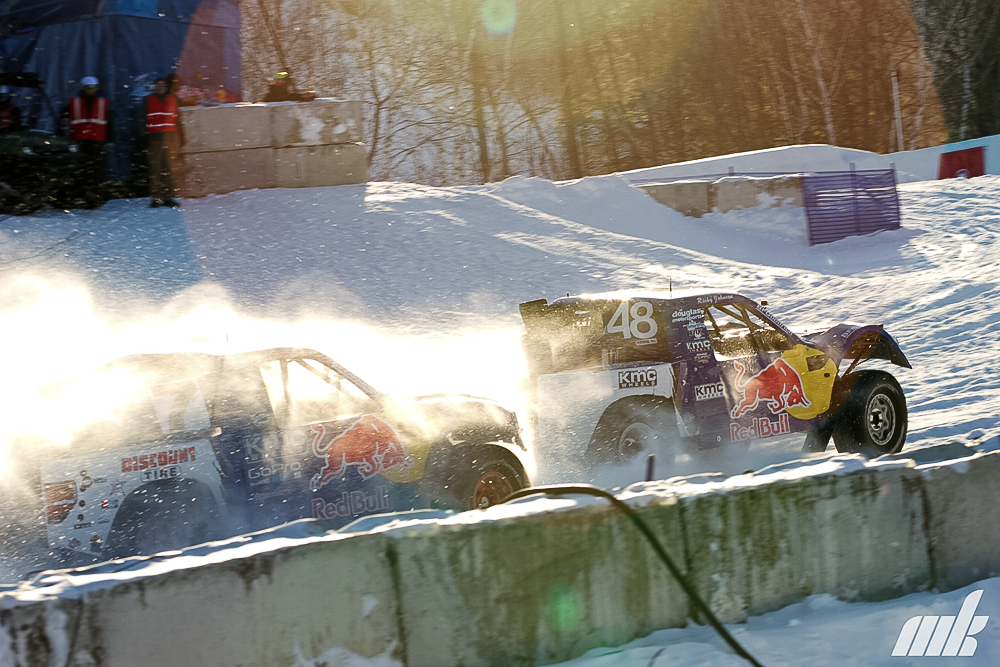 It looked like Johnson would retain his crown when Menzies made a mistake early. But the defending champ had an even more significant issue, allowing the Las Vegas native to take control, and the hard charging Johnson couldn’t quite make up the disadvantage. 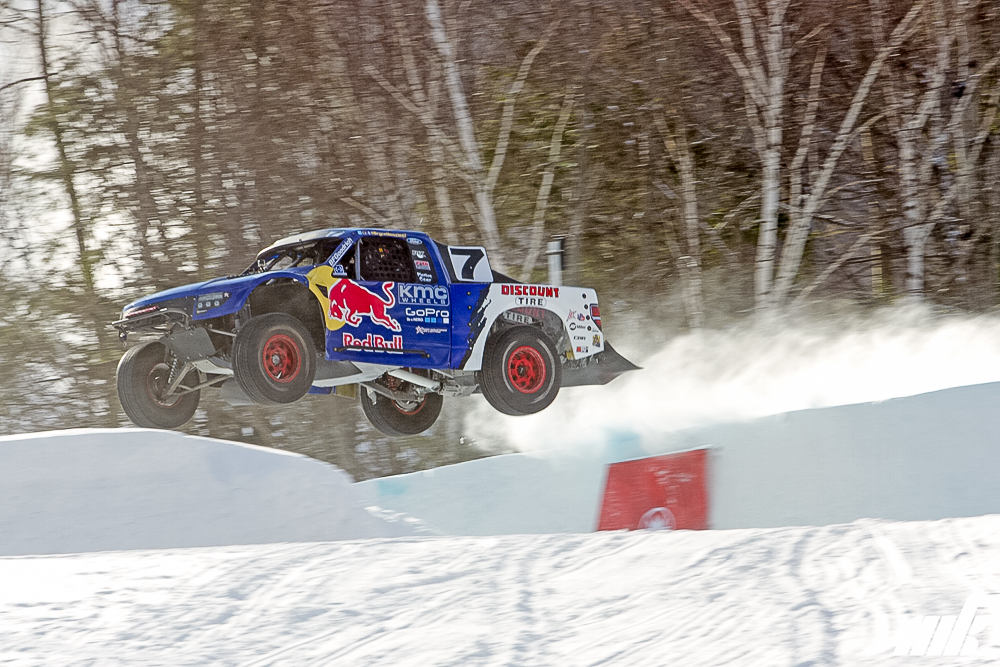 In some ways, it was a passing of the torch. Menzies was driving the truck that Johnson raced at this event last year, for one. But the real story, at least per the announcing crew at the track, was that this could be Johnson’s last time racing a Pro 4. If it’s the case, he left us with plenty of great memories and a hell of a show. 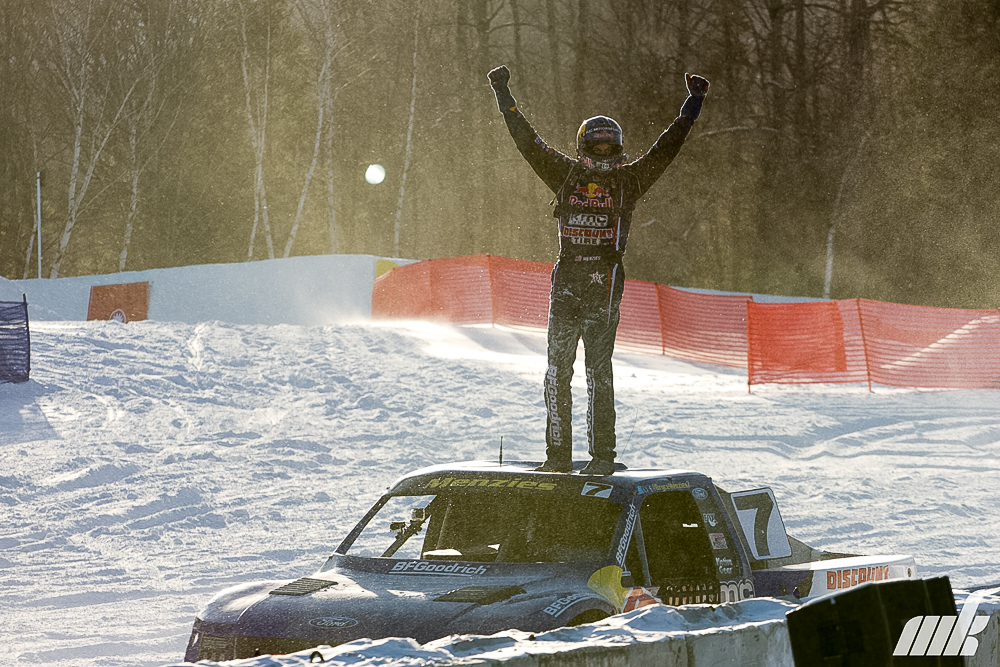 And maybe, in Menzies, an heir to the throne.