The 2014 Lake Superior Performance Rally (LSPR) is the first event I’ve gotten the pleasure to cover for Build Race Party.  I’ve covered several Rally America events as a spectator, but this was gong to be different and I could barely contain my excitement. LSPR takes place in Houghton, Michigan about mid October (17 & 18th this year) and describes itself as the oldest, toughest, meanest rally on the circuit.; they weren’t joking. My friends and I left just before 12am Thursday with a travel time of roughly 7 hours with stops. Beyond the luxury of avoiding traffic I feel it puts us into a Rally mindset where you can fall asleep at a moments notice, but you will be up and pounding energy drinks a moment later. We stayed at the Super 8 in Houghton and this is probably been the best Super 8 stay I have ever had. It is literally right on Lake Superior and provided one of the most spectacular views while dining on our continental breakfast. 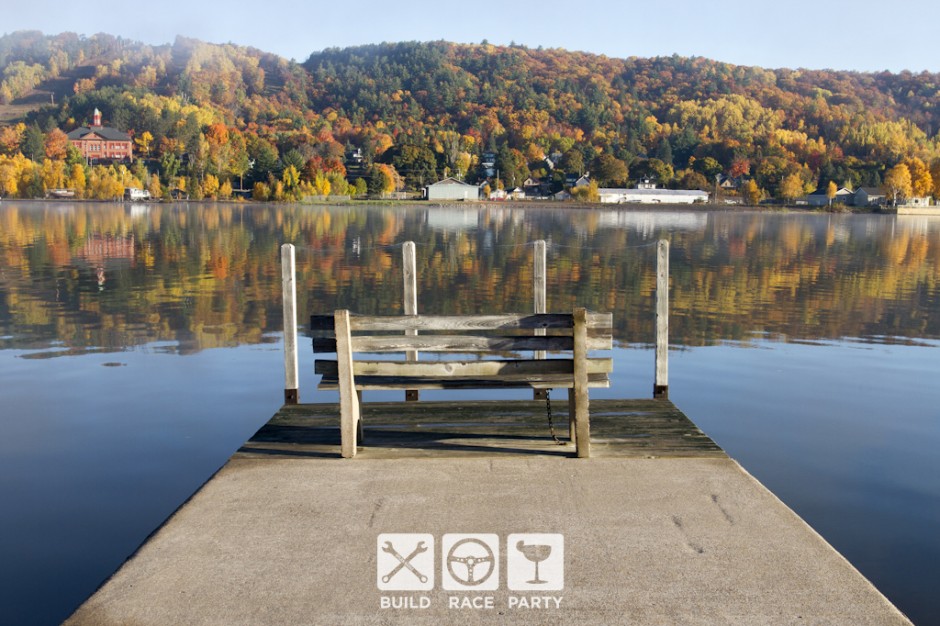 Friday, Day 1 of LSPR started with a trip to Rock House Grill & Tavern for Parc Expose. If you’re a fan or rally and are thinking about spectating be sure to make it to Parc Expose as you get the best opportunity to see all of your favorite drivers/co-drivers and the opportunity to get some swag, and even a change to get that swag signed. I would have to say this is one of the most amazing things about this form of motorsport. There is no cost for a pit pass, or charge to take a picture with your favorite driver; the only think you may have to endure is a line.  You can even get to the point of developing some great friendships with the teams. We met Rally Team Kaltak at Ojibwe Forest in 2013 after posting a photo of their car online as it was right outside our hotel room. They saw it, we started talking and now we look for each other at events and they even help us with all the places to stay, and go while at the event. 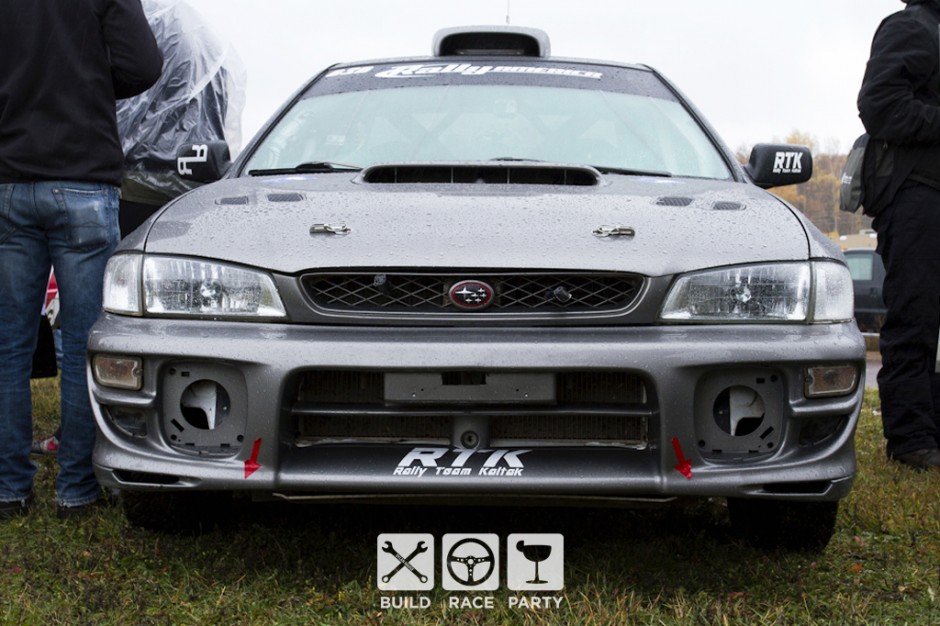 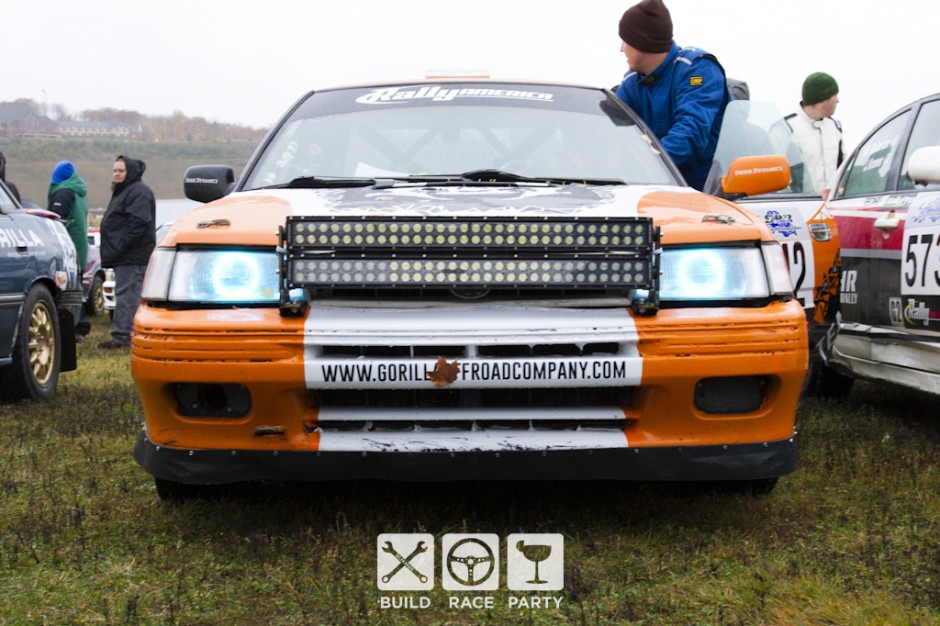 The day was definitely cold, and it started as damp but quickly escalated while waiting for SS1 to start. Halfway through the stage my pants were soaked to the point that they were dripping, but this is rally and that is just part of the fun. There were some old familiar faces among the competitors and some new along with some new livery and support. The Always Evolving 14 car of  David Sterckx and Niall Burns has been getting some support from LSPR hometown team FY Racing. We also got to see Dillon Van Way and Andrew Edwards back in 2WD in a Dirt Fish Ford Fiesta. 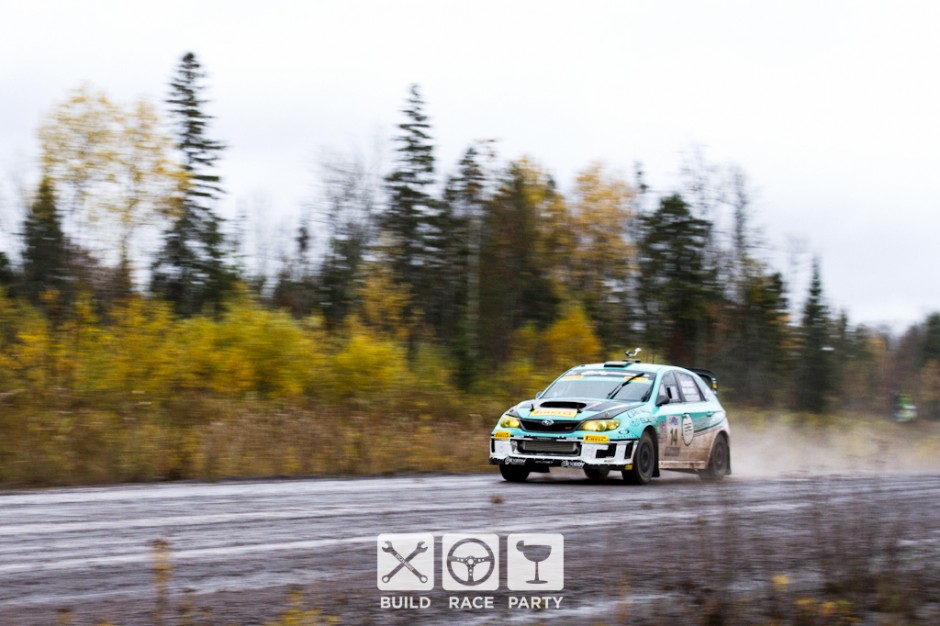 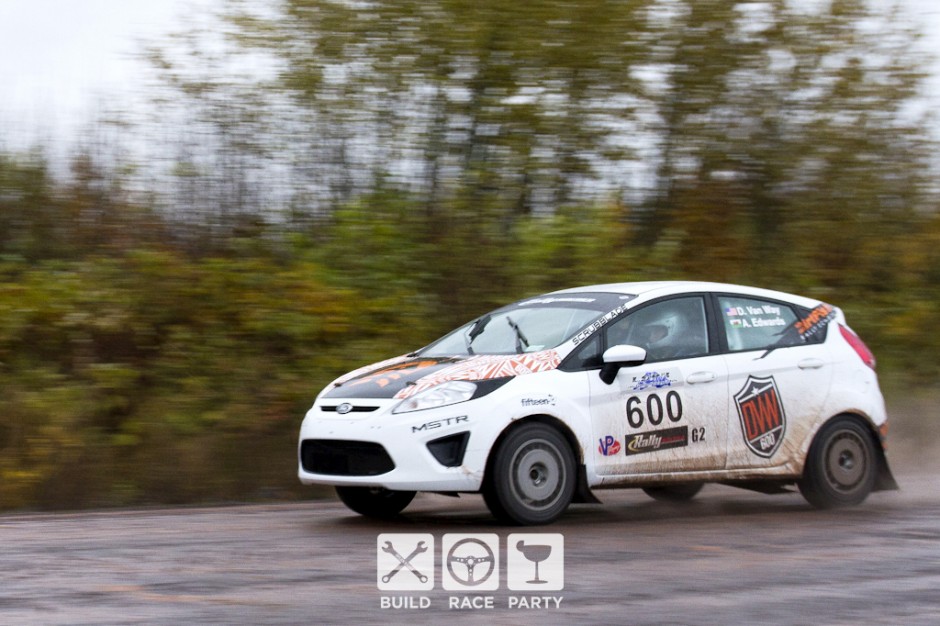 Though the event was a tough and wet one,  Matthew Conte and John Huebbe of Team Conte Racing took first in Open Class Regionally on Day 1 of LSPR at the Ottawa Rally. 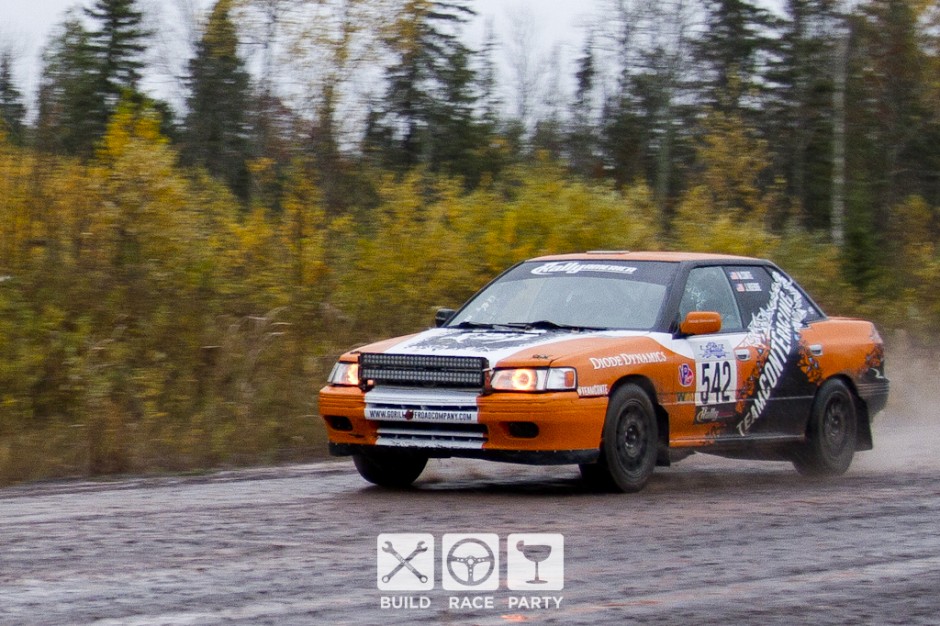 Day 2 started with a an hour journey south from Houghton to SS13 Herman Nestoria and the treacherous off angle jump.

It was amazing to see what kind of speed these teams take the jump at. 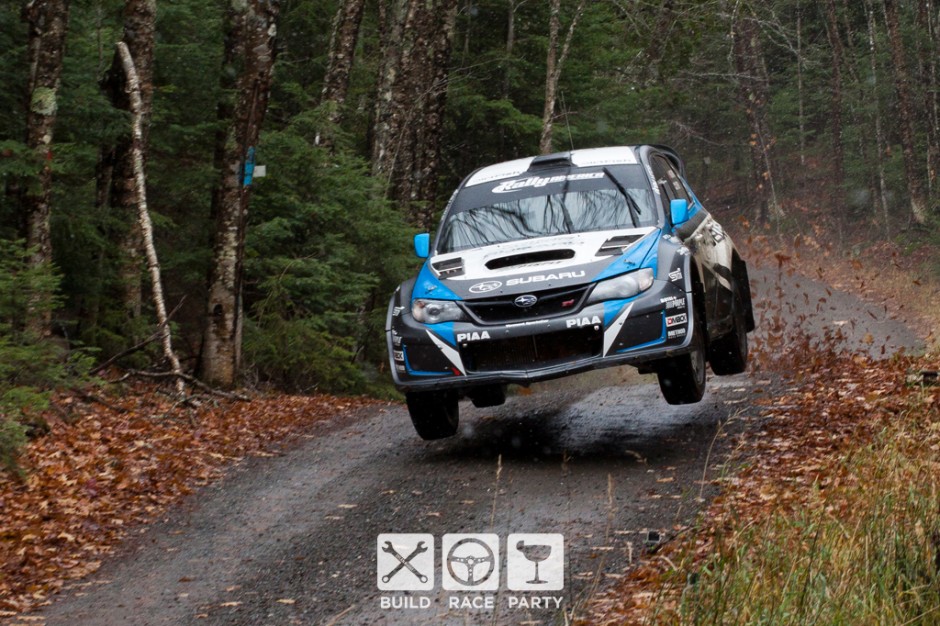 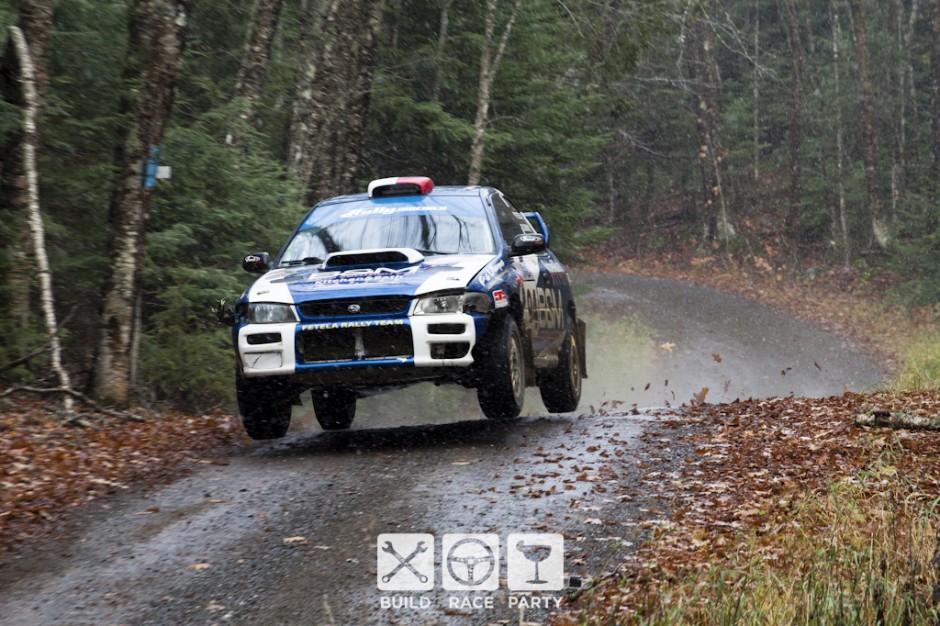 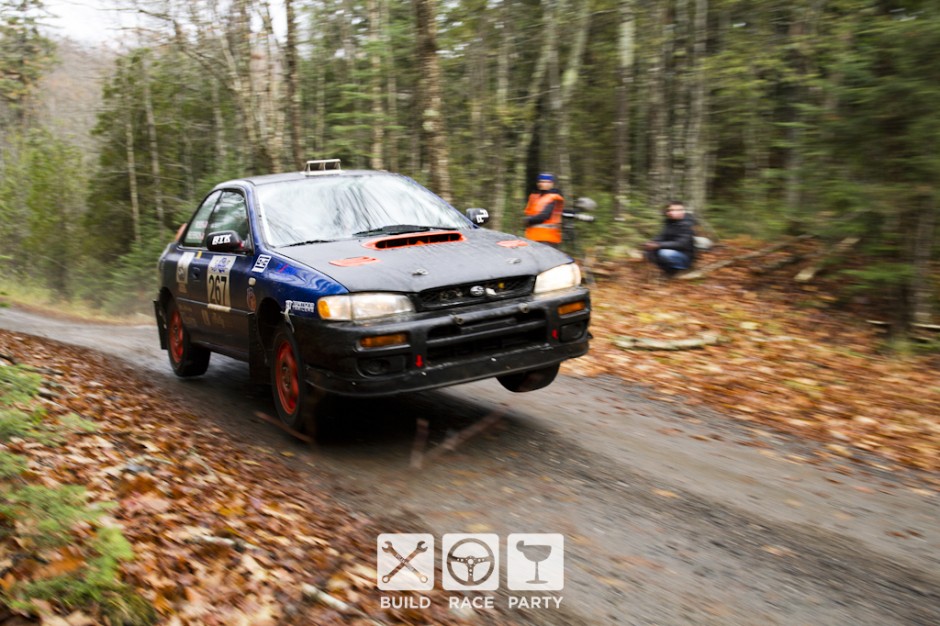 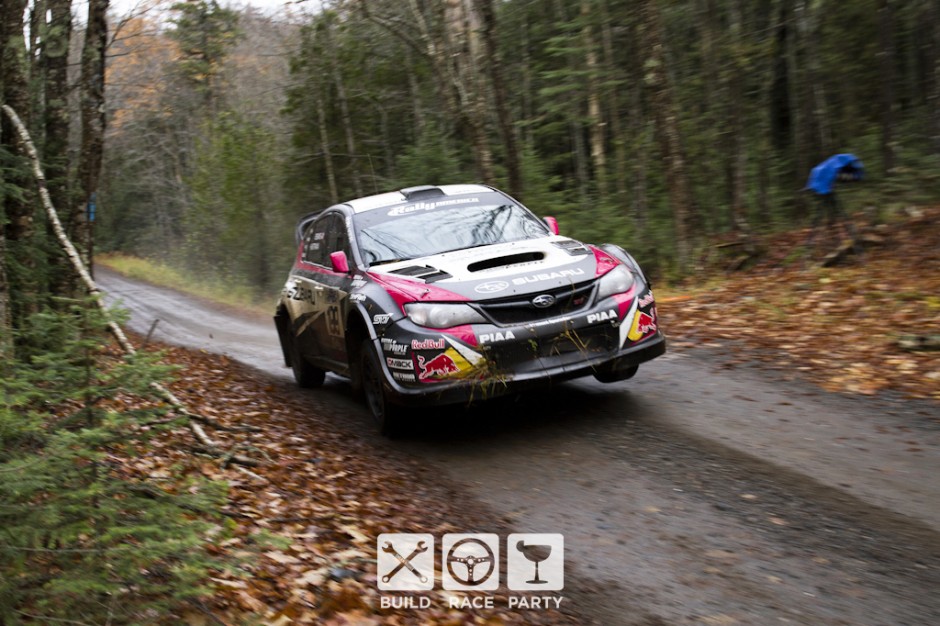 The event was definitely one to remember. A big congratulations is due to Nick Roberts and Rhianon Gelsomino of Nick Roberts Global Rally Team took first in the Super Production class and 2nd Overall which is the best his team has done at an event to this day. 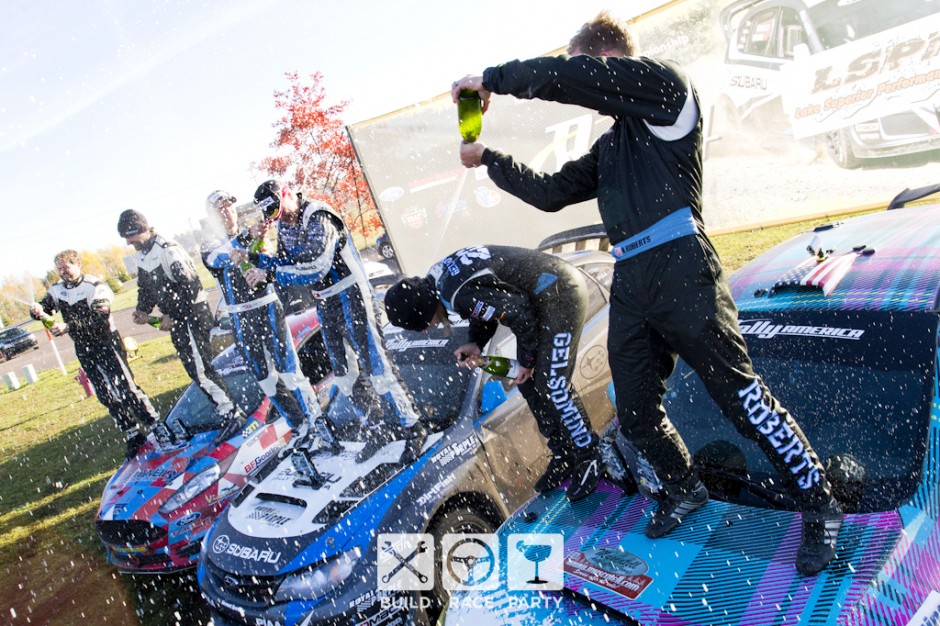 The season has ended, and the points have been tallied but the memories will carry me through till next year. I , for one, can not wait until Sno Drift 2015 to see who will show up this year, and if Subaru Rally Team will have a strong challenger to end their championship streak. I know I would love to see L’Estage and Block make some more appearances in the 2015 season to give the Subaru teams a run for their money.