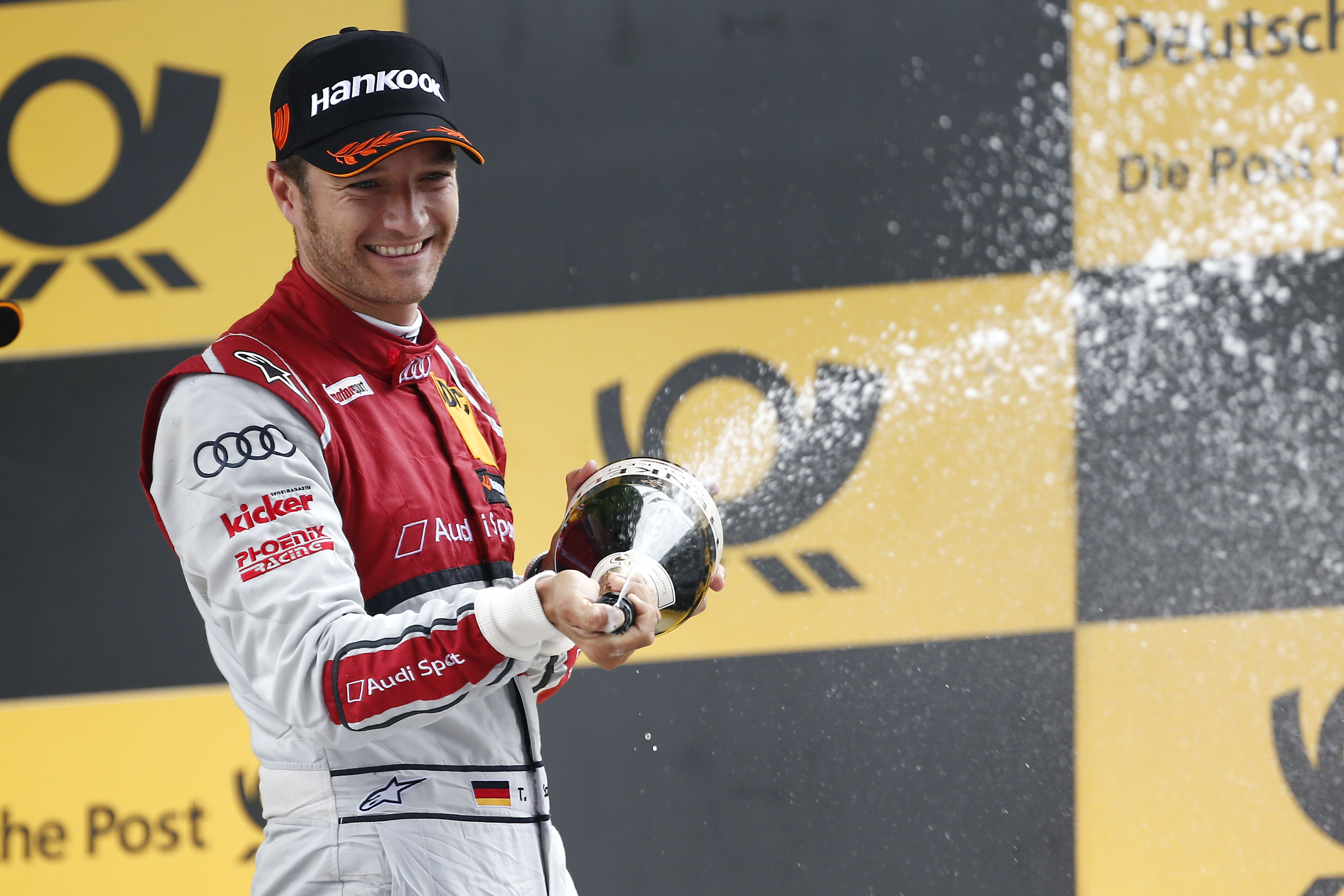 Audi driver Timo Scheider clinched third place, marking his first podium result of the season, at the Lausitzring in front of 58,000 spectators (throughout the weekend). 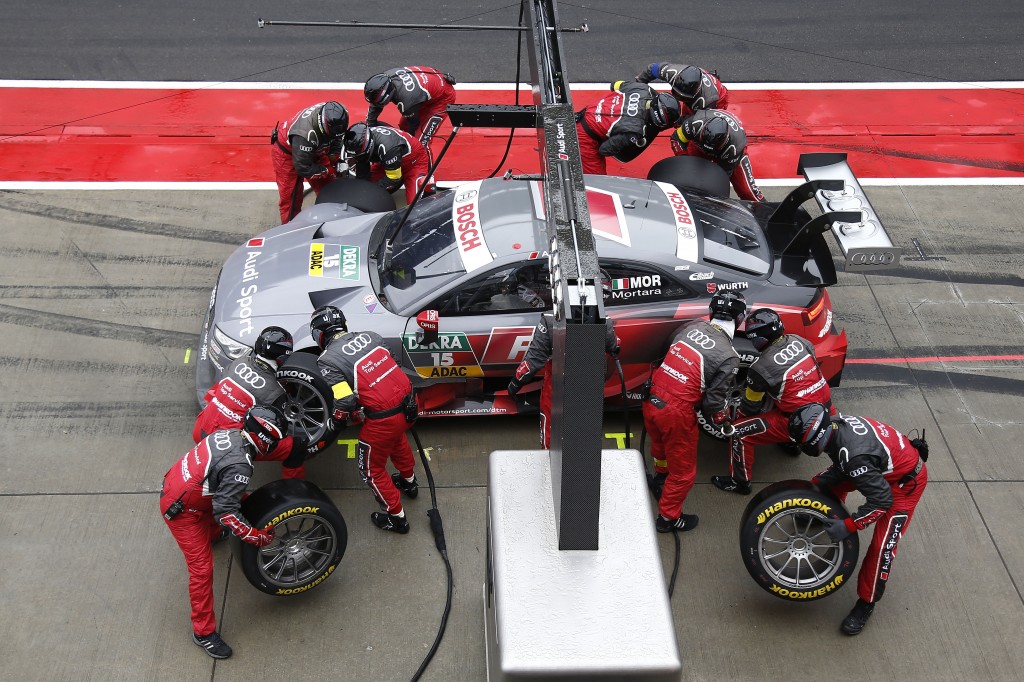 On an initially wet track, the two-time DTM Champion in the AUTO TEST Audi RS 5 DTM of Audi Sport Team Phoenix was in the group of front runners from the beginning of the race. On lap 22, Scheider advanced to third place, continuously made up ground to the second-placed Christian Vietoris after switching to slicks, and drove the fastest race lap in the process. However, the Mercedes Benz driver fended off his attack on the final lap.

“My race was good in what very difficult conditions at times,” said Scheider. “I didn’t even notice all the things that were happening behind me. I’m very happy for my guys that I finally brought home a podium result. It almost turned out to be second place. ‘Thank you’ to Audi and Team Phoenix for a superb job.” 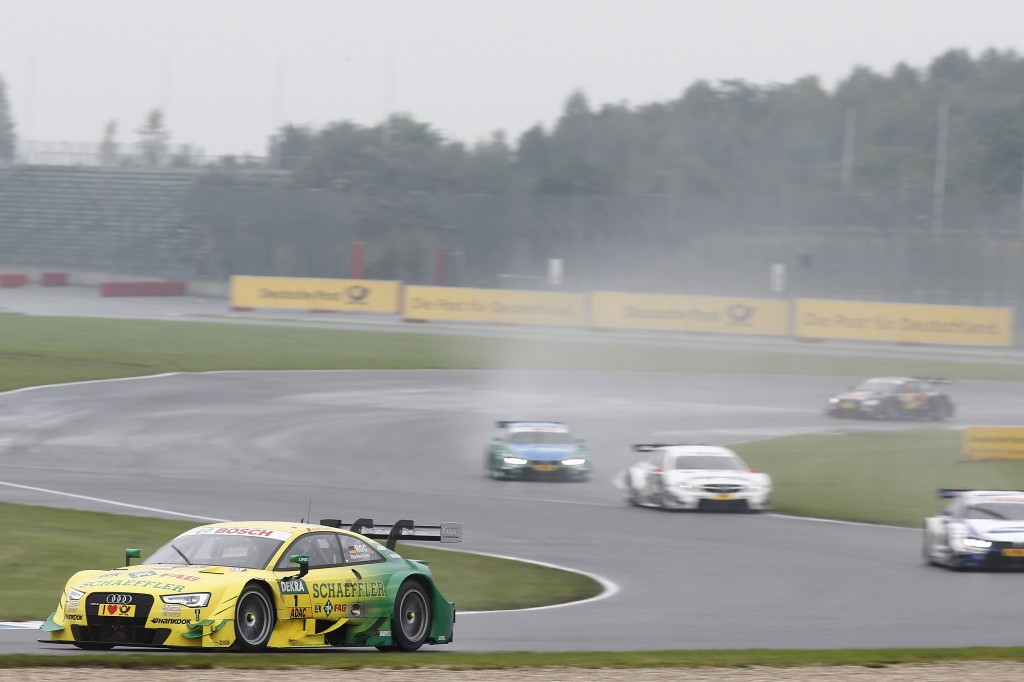 Scheider was the only Audi driver at Lausitz who had a reason to cheer. On a wet track, almost all the Audi drivers were complaining about a lack of grip, resulting in excursions, spins and collisions. With Miguel Molina (Audi Sport Audi RS 5 DTM) from Audi Sport Team Abt Sportsline in ninth place and Scheider’s team-mate Mike Rockenfeller (Schaeffler Audi RS 5 DTM) in position ten, two other Audi drivers finished in the points.

Edoardo Mortara in the Audi Sport Audi RS 5 DTM finished the race in 16th place. The Italian was the only driver in the field to start the race on slicks. However, the tyre gamble did not pan out, as Mortara was lapped twice. 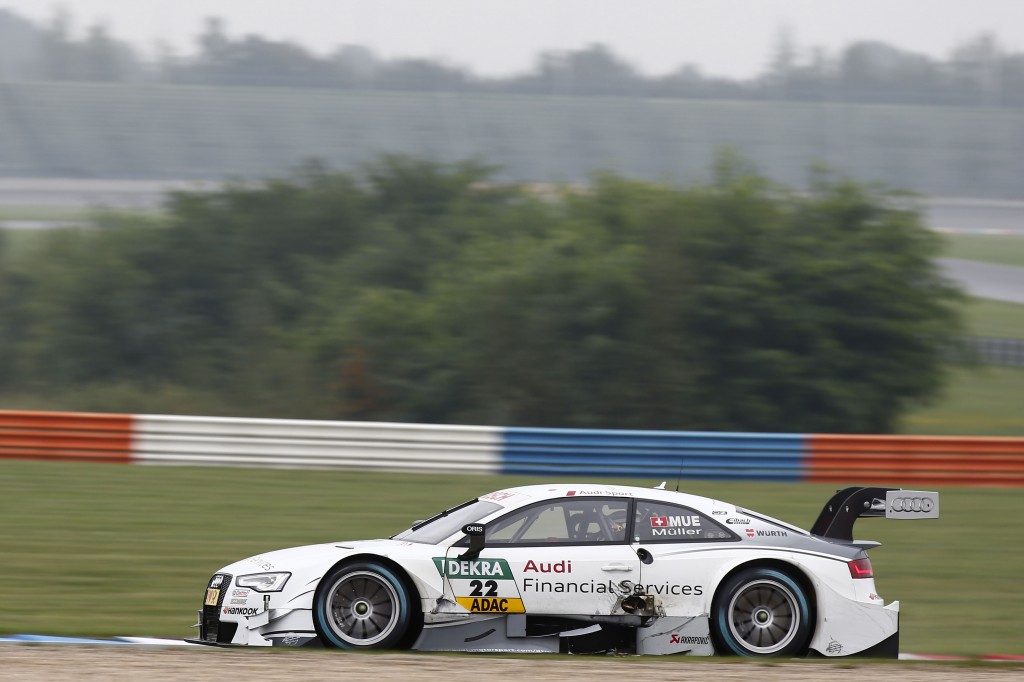 Adrien Tambay had to park his Playboy Audi RS 5 DTM with a damaged right front suspension shortly before the end of the race following an incident of contact and Mattias Ekström (Red Bull Audi RS 5 DTM) did not see the checkered flag either. At the start, the Swede dropped from second to sixth place and lost further ground due to an excursion into the gravel trap. The race was ‘over for good’ following a failed pit stop at which the left front wheel of his RS 5 DTM was not properly tightened. 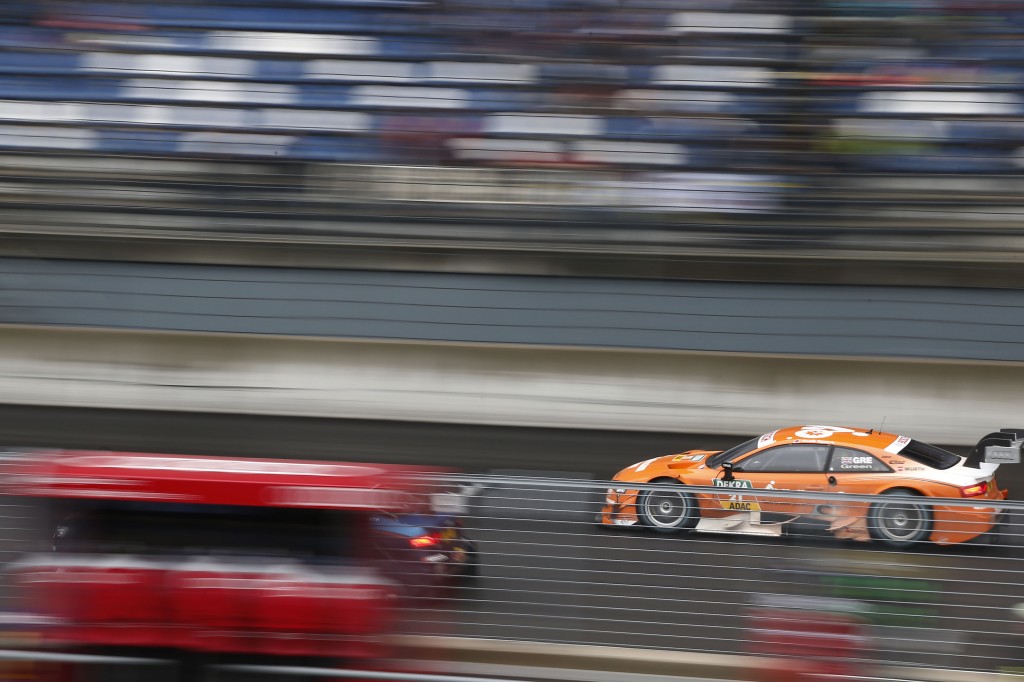 As a result, the decision in the 2014 DTM drivers’ classification was made early in favour of BMW driver Marco Wittmann. In the manufacturers’ standings the narrow gap between BMW and Audi has remained unchanged at 18 points and is therefore still open.

“Congratulations to Marco Wittmann on winning the title,” said Dieter Gass, Head of DTM at Audi Sport. “He’s been on a similar roll this year as Mike Rockenfeller was in the past season. Congratulations also to Timo Scheider on his first podium finish this year. We’ve got analyse for our own purposes why things weren’t going well particularly with the rain tyres on the initial laps.” 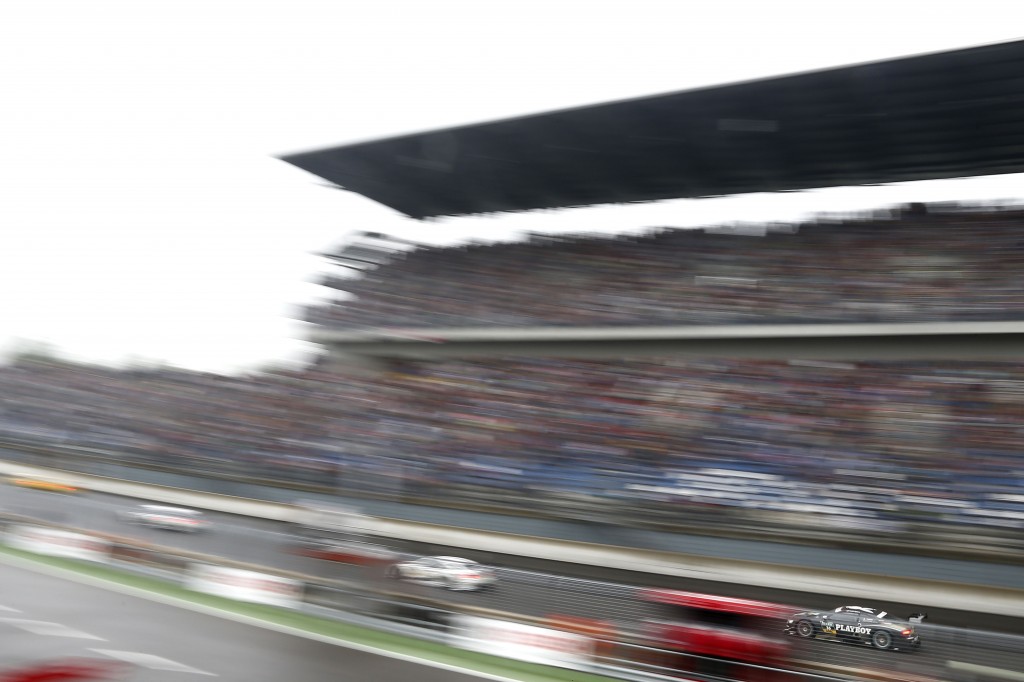 In two weeks from now the next DTM race is coming up at Zandvoort (the Netherlands).

Dr. Wolfgang Ullrich (Head of Audi Motorsport): “I’m incredibly disappointed that at the Lausitzring we again failed to convert our good qualifying results into a victory. At least we didn’t lose any ground in the manufacturers’ standings. The manufacturers’ title continues to be our aim and our chances are still intact. We’ve got to consider the Lausitzring as over and done with and concentrate on delivering a perfect performance at Zandvoort in two weeks from now.”

Dieter Gass (Head of DTM): “Congratulations to Marco Wittmann on winning the title. He’s been on a similar roll this year as Mike Rockenfeller was in the past season. Of course we’re disappointed about the results because we were in a very good position after qualifying; at least we were set for a solid team showing. Unfortunately, two of our people at the front had to start on the left-hand side, which obviously had clearly less grip. That certainly didn’t help matters. But we’ve also got to note that our pace in the wet conditions at the beginning of the race was not consistently good enough to pose a threat to the Mercedes drivers. Finally, a few individual mistakes slipped in as well. All of this resulted in the situation that, in spite of a better starting base, we scored the same number of points in the manufacturers’ classification as BMW did instead of taking advantage of the slight weakness our rival showed here.”

Timo Scheider (AUTO TEST Audi RS 5 DTM), 3rd place
Tyres: rain/option
“It’s great to be on podium again after a long time. It was really a special race with all the conditions you can experience as a race driver. We started on rain tyres. On a drying track it was difficult to properly manage the tyres and not go overboard after changing to slicks. That worked out, the performance curve pointed upwards and we were able to close the gap to the second-placed car. Two more race laps would have been great – in that case I’d have been able to try a more realistic attack on Christian Vietoris.”

Miguel Molina (Audi Sport Audi RS 5 DTM), 9th place
Tyres: rain/option
“It was a difficult race. In the beginning I was lacking pace, so I lost a few places. On the laps before the tyre change, the car felt better but I was slowed a bit in traffic. On the option tyres, I was able to battle for a top-10 result. Ninth place isn’t what we expected before the race but at least it means two more points and now we’re concentrating on the last two races.”

Mike Rockenfeller (Schaeffler Audi RS 5 DTM), 10th place
Tyres: rain/option
“It was a turbulent race. In the end, I only finished in tenth place. That was frustrating. My car was damaged because a few others ran into me. That robs you of any further chances. Bruno Spengler slowed me once, which allowed Marco Wittmann to get past me. Although that was a clever move it would actually call for a penalty. Situations like that have major consequences and you lose a lot of time. Now we’re travelling to Zandvoort and are going to try our best again.”

Edoardo Mortara (Audi Sport Audi RS 5 DTM), 16th place
Tyres: option/standard
“A super-difficult race. We had a different strategy than the other drivers. We started on option tyres, which wasn’t optimal. We were hoping for the track to dry off after a few laps, but it stayed wet. We made the wrong decision but have a good car for Zandvoort and are hoping for top results in the last two races.”

Jamie Green (Hoffmann Group Audi RS 5 DTM), 17th place
Tyres: rain/option
“That was a tough and very eventful race for me. My speed after the start was good and I was running in third place. At the exit of turn seven I spun and lost a few places. But I was still at the front of the field until I again had problems in turn seven and had to take an excursion into the gravel trap. I then battled my way back, but had contact with Martin Tomczyk and we both spun. I received a drive-through penalty for that. Still, I was aiming for a top-10 result but started having a technical problem with the car and was forced to retire.”

Adrien Tambay (Playboy Audi RS 5 DTM), 18th place
Tyres: rain/option
“It was an eventful race. My pace on rain tyres was good. I received a drive-through penalty for a violation under yellow flags. That was tough. It meant my race was over. I subsequently had slight body contact with Jamie (Green). I’m sorry about that because it was a misunderstanding in difficult track conditions. I wasn’t able to finish the race today. We’ve got to look ahead now. I’m now hoping for two good races at the end of the season.”

Mattias Ekström (Red Bull Audi RS 5 DTM), retirement
Tyres: rain/option
“Not a good race for me. I had a poor start, slipped off track once and, after the pit stop, the front left wheel nut wasn’t properly tightened. As a result, the race ended very quickly for me.”

Nico Müller (Audi Financial Services RS 5 DTM), retirement
Tyres: rain
“I had a nice start, the pace was good and I was able to make up a few places. Then Gary Paffett bumped into me and the rear wheels were no longer tracking correctly. Afterwards, Antonio Félix da Costa was a bit too optimistic in the first sector and I subsequently had shifting problems and was forced to park the car.”

Hans-Jürgen Abt (Team Director Audi Sport Team Abt Sportsline):“Congratulations to Marco Wittmann on winning the Championship. He made no mistakes and was the best throughout the season.”

Ernst Moser (Team Director Audi Sport Team Phoenix): “It was a very difficult race and you could tell how many drivers made mistakes. Our two drivers put up a good fight and were running fast. In the beginning, Mike Rockenfeller was hit by Timo Glock, after which his car was no longer in really optimal condition. That’s why I’m happy with his tenth place. Timo (Scheider) made no mistakes, did a good job of managing his tyres and in the end, on option tyres, approached Christian Vietoris. It’s a shame for Audi that we again didn’t manage to clinch victory but, to win, everything’s got to fit from the first to the last lap. But I’m pleased with our team performance.”

Arno Zensen (Team Director Audi Sport Team Rosberg): “This wasn’t our Sunday. Nico (Müller) had to retire with transmission problems. Things hadn’t been looking so bad up to that point. Jamie (Green) had no grip, but then neither did anybody else. He was very quick but with two spins, an excursion into the gravel trap and a drive-through penalty a better result wasn’t possible. Our expectations were certainly different.”