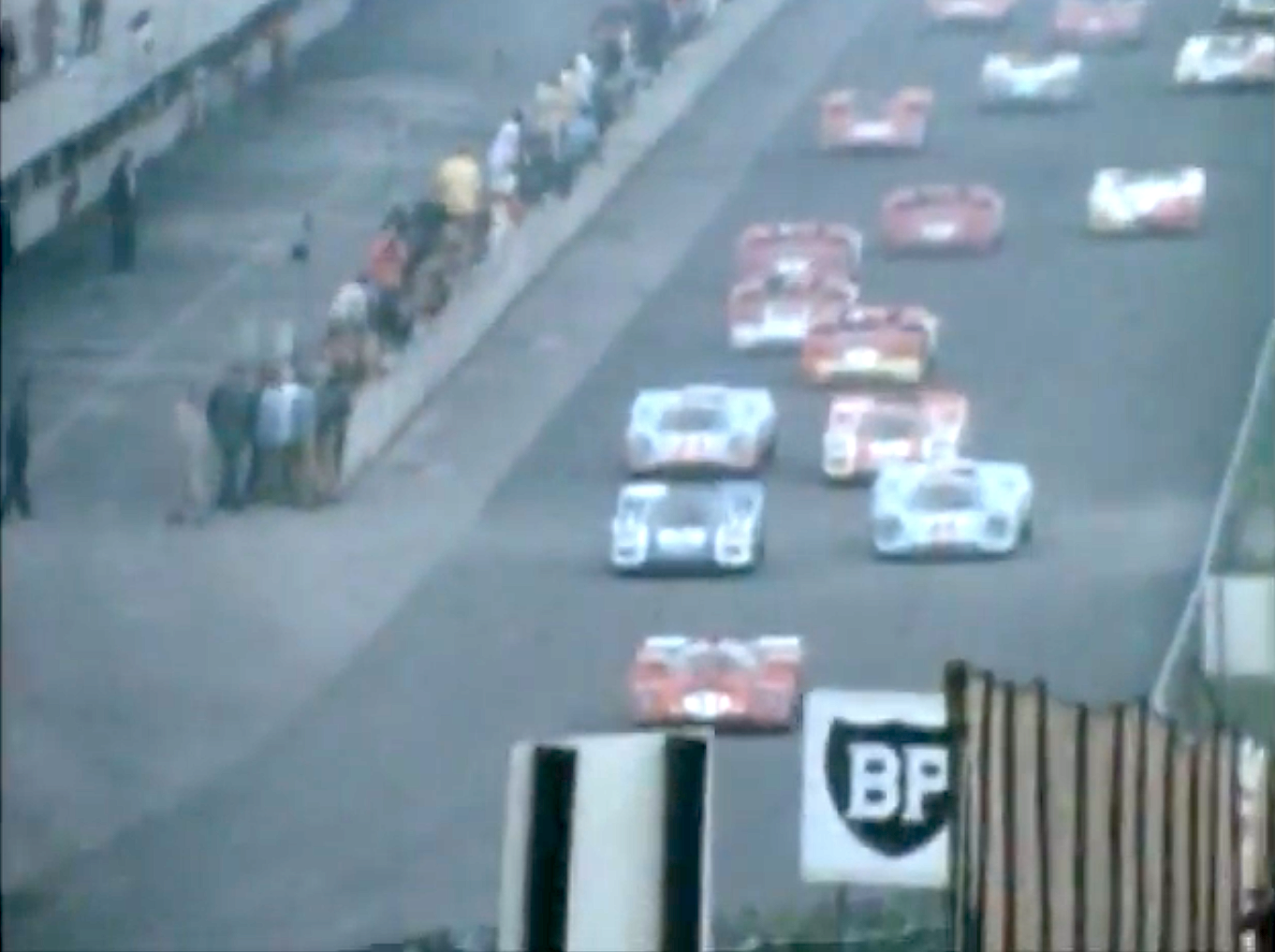 1970 was one of the best years of all time to race a car. The Targa Florio still existed. So did the 1000km at the Nurburgring. And they were all part of one racing series. Its also the first time that Porsche won the 24hrs of LeMans outright. Mostly due to the 917. This video is about the Wyer-Golf team and their incredible 1970 racing season with the Porsche 917.

The 917 is easily one of Porsche’s most iconic race cars. For the most part, it was powered by the Type 912 flat-12 engine of up to 5 litres (can am used turbos). The 917/30 variant was capable of a 0-62 mph (100 km/h) time of 2.3 seconds, 0–124 mph (200 km/h) in 5.3 seconds, and a top speed of over 240 mph (390 km/h). The original version had a medium-long tail with flippers, but had considerable handling problems at high speed because of poor bodywork aero. But the Wyer-Gulf team featured in this movie then experimented with a shorter tail and solved the aerodynamic and handling problems. Porsche adopted these changes into the 917K, which then dominated in the 1970 and 1971 World Sportscar Championships.

Details on the 1970 Season from Wikapedia:

Disappointed by the poor results of the 917 in 1969, and facing new competition, Porsche concluded an agreement with John Wyer and his JWA Gulf Team, which became the official Porsche team, and also the official development partner. During tests at the Osterreichring at Zeltweg, works drivers Redman and Ahrens tested the car, and the car still performed like it did before. The Osterreichring was the circuit where the car had won its only race at that time, Wyer’s chief engineer John Horsman noticed that the bodywork had a pattern of dead gnats dashed against it, revealing the airflow. The tail was clean—the presence of no dead gnats indicated that the air was not flowing over the tail. A modification to the tail was cobbled-up on the spot in the pits with aluminium sheets taped together. This new short tail gave the 917 much needed stability from downforce. The plastic engine intake cover had already been removed. Redman and Ahrens were doing only one lap at a time before, they each did 10 laps and were satisfied with the improved performance. The new version was called 917K (Kurzheck, or “short tail”).

In addition to the big and powerful 917, the lightweight and compact Porsche 908/3 were developed for the slow and twisty tracks of the Nürburgring and the Sicilian mountain roads used in the Targa Florio, providing wins while the factory-backed 917 remained in the garages, as these cars were not suitable to these tracks. The 908/3 was built to the FIA’s 3-litre Group 6 Prototype regulations whereas the 917 was now officially a Group 5 Sports Car following another FIA review of its racing classes, applicable from 1970.

Wyer was surprised to discover that another team was carefully preparing for the 1970 24 Hours of Le Mans with close support from Porsche. As in 1969, the Porsche Salzburg team was a de facto second works team under control of members of the Porsche family. The Martini Racing team also gained some support from Porsche AG; obviously Porsche made efforts to win the race by supporting more than one team.

Also, a new low drag version of the 917 was developed for Le Mans with support from the external consultant Robert Choulet. The 917L (Langheck) featured a spectacular new “Long Tail” body including partially covered rear wheel arches which had very low drag, yet better stability than the 1969 version. A few 4.9-litre engines, introduced at 1000km Monza, were available for some cars, but these proved to put too much strain on the gearboxes.

The favorite team to win, Gulf-backed John Wyer Automotive, lined up three 917Ks, two with the 4.9-litre engine and one with the 4.5-litre unit.

Two 917 L were entered in Le Mans, one in white and red trim by Porsche Salzburg. Driven by Vic Elford and Kurt Ahrens, the pole sitter’s 4.9-litre engine failed after 225 laps. Both drivers had also been entered on the team’s other car, a red and white 917 K with the standard 4.5-litre engine, qualified by Hans Herrmann and Richard Attwood on rather low 15th spot, but they did not drive after their own car failed.

The other L was entered by Martini Racing, qualified by Willy Kauhsen and Gérard Larrousse on 12th position. The spectacular livery of this car was an elaborate whirls and swoops of light green on a dark blue background. The car with the regular engine gained the nickname of the Hippie Car or the Psychedelic Porsche from the team and media.

Early in the race, most of the works Ferrari 512 entrants eliminated each other in a shunt. The two Porsche factory teams, Gulf-Wyer and Porsche Salzburg, continued to battle each other, but all Wyer cars were out after 12 hours. At the end it was the red and white #23 917K of Porsche Salzburg, with the standard 4.5-litre engine, carefully driven by Stuttgart’s own Hans Herrmann and Englishman Richard Attwoodthrough the pouring rain, that finally scored the first overall win at Le Mans, in a wet race that saw only 7 ranked finishers. Martini’s blue 917L with a green “psychedelic Hippie” design came in 2nd. Both cars were later paraded across Stuttgart. To complete Porsche’s triumph, a 908 came third, a 914 sixth, and a 911S seventh, beaten only by two Ferrari 512.

During the 1970 season the FIA announced that Group 5 Sports Cars would be limited to a 3-litre engine capacity maximum for the newly renamed World Championship of Makes in 1972, so the big 917s and 512s would have to retire from the championship at the end 1971. Surprisingly, Ferrari decided to give up any official effort with the 512 in order to prepare for the 1972 season. A new prototype, the 312 PB, was presented and entered by the factory in several races. But many 512s were still raced by private teams, most of them converted to M specification.

By the end of 1970, Porsche had stamped their authority on endurance racing by convincingly dominating the championship that year. Of the 10 races in the championship (plus some other non-championship events), the works teams (John Wyer Automotive and Porsche Salzburg) had won every race except Sebring (which was won by Ferrari) that year with the 2 makes of cars they used, the 917K and the 908/03; with the 917K winning 7 of 8 events it was entered in; and the 908/03 winning at the Targa Florio and the Nürburgring (the 917K was not entered by the works teams at these 2 events). Still having some of their 25 cars remaining unsold, Ferrari offered them to customers at a bargain price – a move that had hardly been imaginable less than two years previously. For Porsche, the original production series of 25 917s could not satisfy demand. Over 50 chassis were built in total. An underdog for 20 years, Porsche had turned itself into the new leader of sports car racing with the 917.